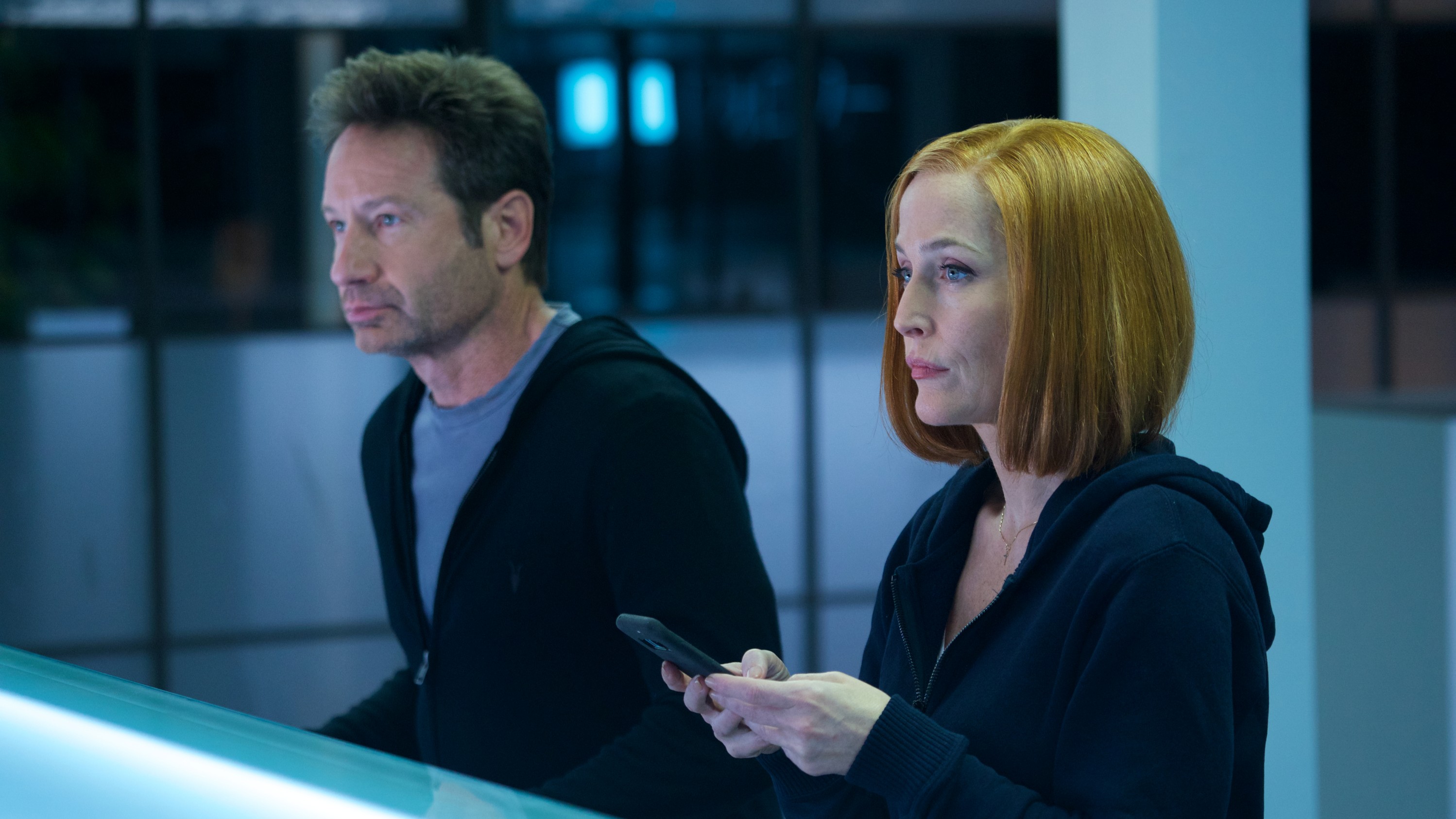 Color me surprise: I actually adore “Rm9sbG93ZXJz,” the seventh episode in this season and the first episode of The X-Files after a three week break. I read the description, I saw the name, I watched the cold open, and I was ready to punch my fist through a wall at how stupid it all was. Then, when the story actually started, the episode quickly got amazing. This is the first episode of this season that’s been not just decent or passably watchable, but actually good. Honestly, the folks involved in making this show are lucky we raised such a stink about their all-male writers’ room and that Queen Gillian Anderson lobbied for some ladies to be on staff because it seems to me like a little fresh perspective, modern awareness, and old school love are exactly what this show sorely needed.

First of all, I’m convinced the Taybot cold open was tacked on by some idiot like Chris Carter. This episode would have functioned perfectly without the pedantic moral “lesson.” It was also completely absurd because Taybot was a thing that actually happened. It’s one thing to get your inspiration from reality and build on that. It’s legitimately stupid to lecture your audience like they’re children, set out the premise of your sci-fi plot, and end your cold open with the moral of the story you haven’t even seen yet. That was so out of kilter with the tone of the rest of the episode that I just don’t believe the same writers are responsible for it. 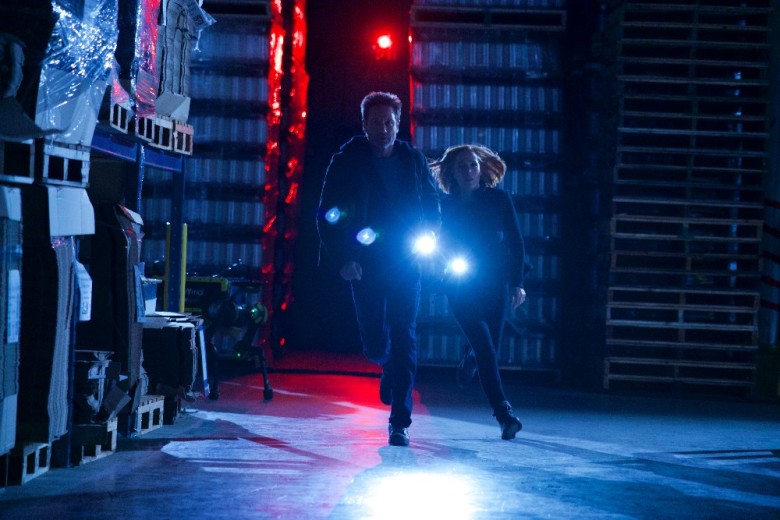 The rest of the episode is phenomenal. It’s the kind of classic Monster of the Week that this show used to excel at, and (astoundingly) updated with a real, relevant, modern monster. Generally, when this show has tried to have “current” monsters in its revival seasons it’s just come off as extremely past its prime. Rather than have Scully weep about how everyone is disconnected or have Mulder give us a disjointed lecture about how degenerated we are as a society, they get the point across by having everyday objects and interactions escalate to an intensely dangerous level over something that’s seemingly innocuous. Mulder refuses to tip the robot sushi chef and hence hoards of AI technology ends up trying to kill Mulder and Scully for their rudeness. There’s no grand conspiracy here. Their dead friends aren’t stuck in the machine. No corporations are out to get them, and no governments are trying to silence them. Some AI just probably needs to be recalibrated.

Personally, I spent this entire episode belly laughing as each piece of technology heightened the stakes. It works precisely because most of the technologies portrayed aren’t actually intelligent at all, but are just smart enough to be a living nightmare when they screw up. True, they don’t actively try to kill you, but murder feels like a distinct possibility when your gadgets start to go wrong. Honestly, the humor here isn’t quite at “Bad Blood” and “Jose Chung” levels but it’s definitely up there. Those had an element of meta to them that this doesn’t. Maybe more like “War of the Coprophages?” At any rate, I was ready to absolutely shred this episode and instead I genuinely enjoyed every minute of it (minus the cold open.) 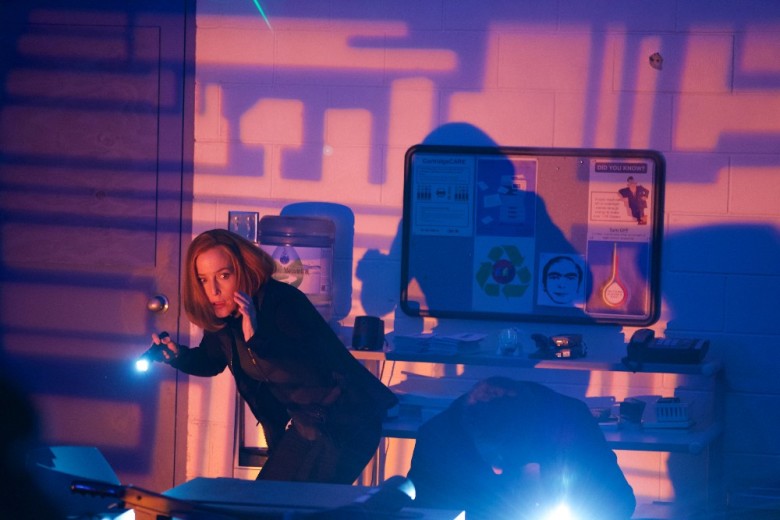 I think another thing that definitely helped this episode, especially in comparison to the rest of the season, is how sparse it is on dialogue. The entire first act doesn’t have a single line, which was a cute conceit and helped make the robot sushi bar scenario all the more funny. The crusty, bitter old men who are doing most of the writing on this series seem to have forgotten that you don’t have to orate and berate your audience to get your point across. I think part of the problem is that the guys who were doing this in the ‘90s genuinely don’t understand what’s scary, spooky, or paranormal anymore. The technology changed around them too quickly, and I’m grateful that fresh blood could capture the old spirit of X-Files with a modern twist without being condescending about it. Mulder and Scully would use all of this technology just by living in the world we live in now. The commentary comes in the two of them putting down their devices and  existing in the moment together at the end. It has the same cautionary tone but in a much more beautiful way as it’s the first authentically romantic moment I’ve seen between Mulder and Scully in years plus it hammers home the moral of the story without even using words. Bravo.

I just double-checked because I strongly suspected this was going to be the only episode written by women we were going to get. I’m happy to say, there is one more penned by a lady–not next week, but the week after–and hopefully it will be as great as this. It’s not just the gender of the writers that concerns me as I think the fact that all of them are new to the series and have probably loved it since it first aired has a lot to do with the quality of this particular episode as well. They captured the style and tone of what X-Files should be perfectly, and turned in a fantastic one-off story. At this point, it’s the only episode in this season that I’m willing to acknowledge exists.