Jude Law stars as THE YOUNG POPE in HBO’s newest series. He was chosen for his youth with the idea he could be bent to the will of the older Cardinals, but will he prove himself to be so easily manipulated, or will he shake things up in the Holy City?

The opening sequence of The Young Pope is a beautiful and surreal fever dream of Lenny Belardo’s (Jude Law) foray into the Vatican. He crawls out from under a mountain of dead or sleeping babies to find himself in St. Peter’s Square, empty and alone. Next, he must navigate his way carefully through all of the people and groups who stand in his way to the holy throne. The compositions, lighting, and facial expressions of people in these encounters have a painterly quality to them. Each one is a gorgeous still life. As Lenny winds his way through it all, there’s a sense of danger boiling under the surface. He needs to choose his path carefully as he makes his way to the Papal throne. There isn’t any dialogue for the majority of the dream, and yet it tells us almost everything we need to know about Lenny. 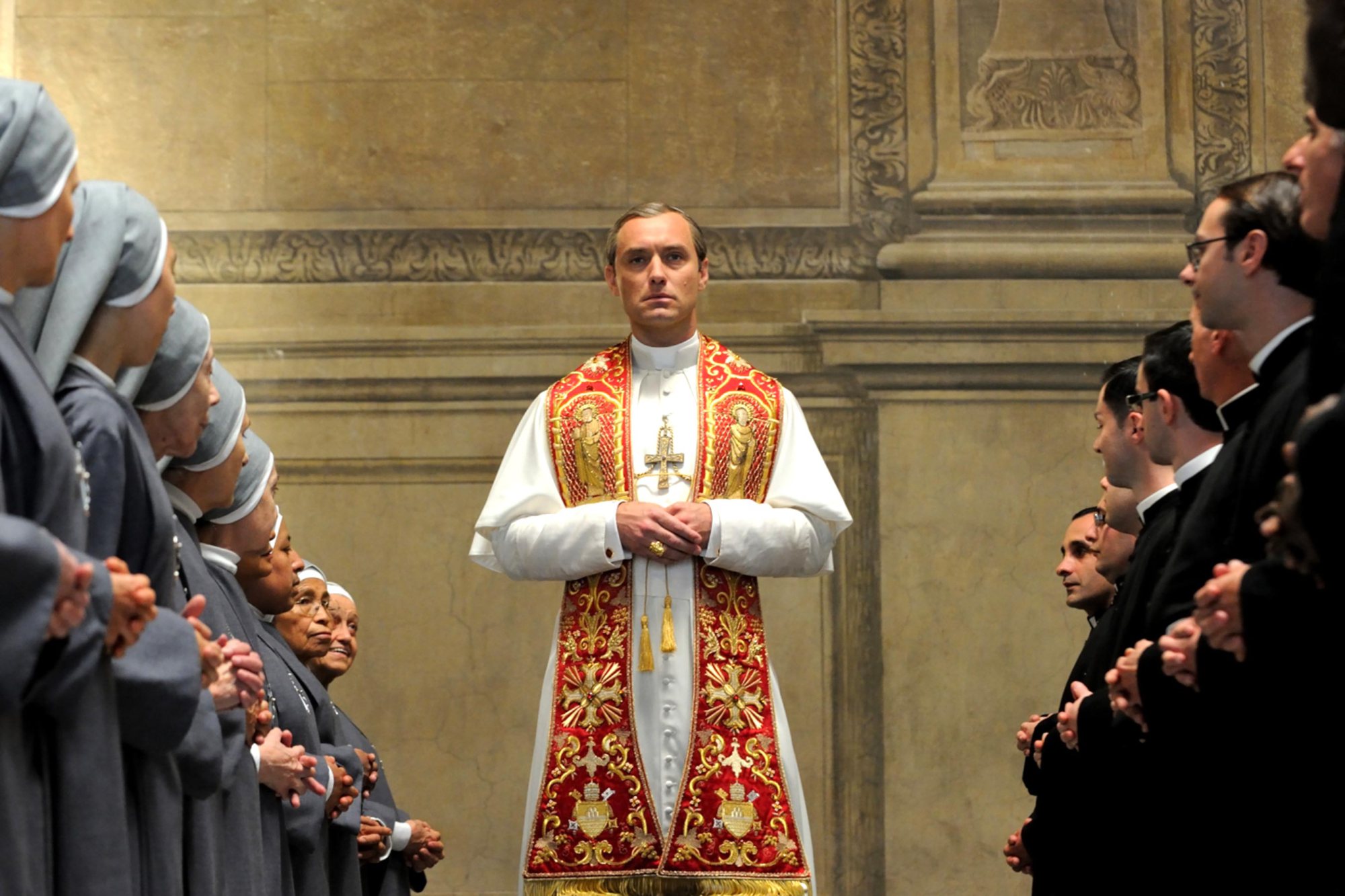 For a moment it seems as if the dream has ended, as Lenny addresses the gathered crowds in St. Peter’s Square. It’s raining, but with a sweep of his hands, the clouds part and the rain ceases as if by a miracle. The speech is self-aggrandizing. Lenny plays to the crowd, but suddenly things veer off into the strange as he promotes masturbation, abortion, divorce, and sex for pleasure until Cardinal Voiello comes and tells Lenny he isn’t the Pope, Voiello is, and in fact he’s been kicked out of the Church. When Lenny finally wakes from this anxiety-ridden dream, we’ve already learned so much about him as a character, and the obstacles and obstructions in his way. It’s an ingenious introduction to both the character of Lenny Belardo and the situation he finds himself in. It also sets the tone of the series as irreverent, amusing, and dangerous. My hat is off to Sorrentino for coming up with such a powerful and insightful entrance into the world he’s created.

We are introduced to Lenny, or Pope Pius the XIII as he will be known, right after he’s newly elected to the highest calling a Catholic can attain. The College of Cardinals chose him as Pope with the idea that since he’s so young he’d be a telegenic puppet they could easily manipulate and bend to their will. They passed over his mentor Cardinal Spencer (James Cromwell) who is devastated by not being chosen, and in one of the only scenes we see him in, attempts suicide. Lenny will be the first American Pope, and right away he begins bucking tradition and squashing any hopes the elder Cardinals had in being able to guide and influence him.

Jude Law plays Lenny as a man with a little appetite, humor, or compassion. All he wants for breakfast is a Cherry Coke Zero, and it annoys him they can’t find one. He doesn’t laugh at others jokes, doesn’t have time for Voiello’s idea of what should be done at the moment, and doesn’t seem to care much for tradition and how things have been done before by other Popes. Lenny is sly, vindictive, and malevolent, but able to mask what’s going on inside him with a cold, stern exterior. He clearly has an agenda, and in order to be able to enact it he brings Sister Mary (Diane Keaton), the nun who raised him since he was seven, to be his right hand in all things. In their first official meeting Lenny and the Cardinal Secretary of State Voiello clash on what should or shouldn’t be focused on immediately. Lenny knows Voiello has his own agenda, and a sense of his own power, and before Voiello can even flex his muscles Lenny disrespects him in a show of power, and makes the Cardinal get him a cup of coffee. Voiello started the conversation with the upper hand, but by the end of it Lenny has neutered his power and role within the papal hierarchy. Because he doesn’t trust Voiello, Lenny affixes Sister Mary to be his guardian angel. She will follow him around at all times and report back to Lenny about his doings. 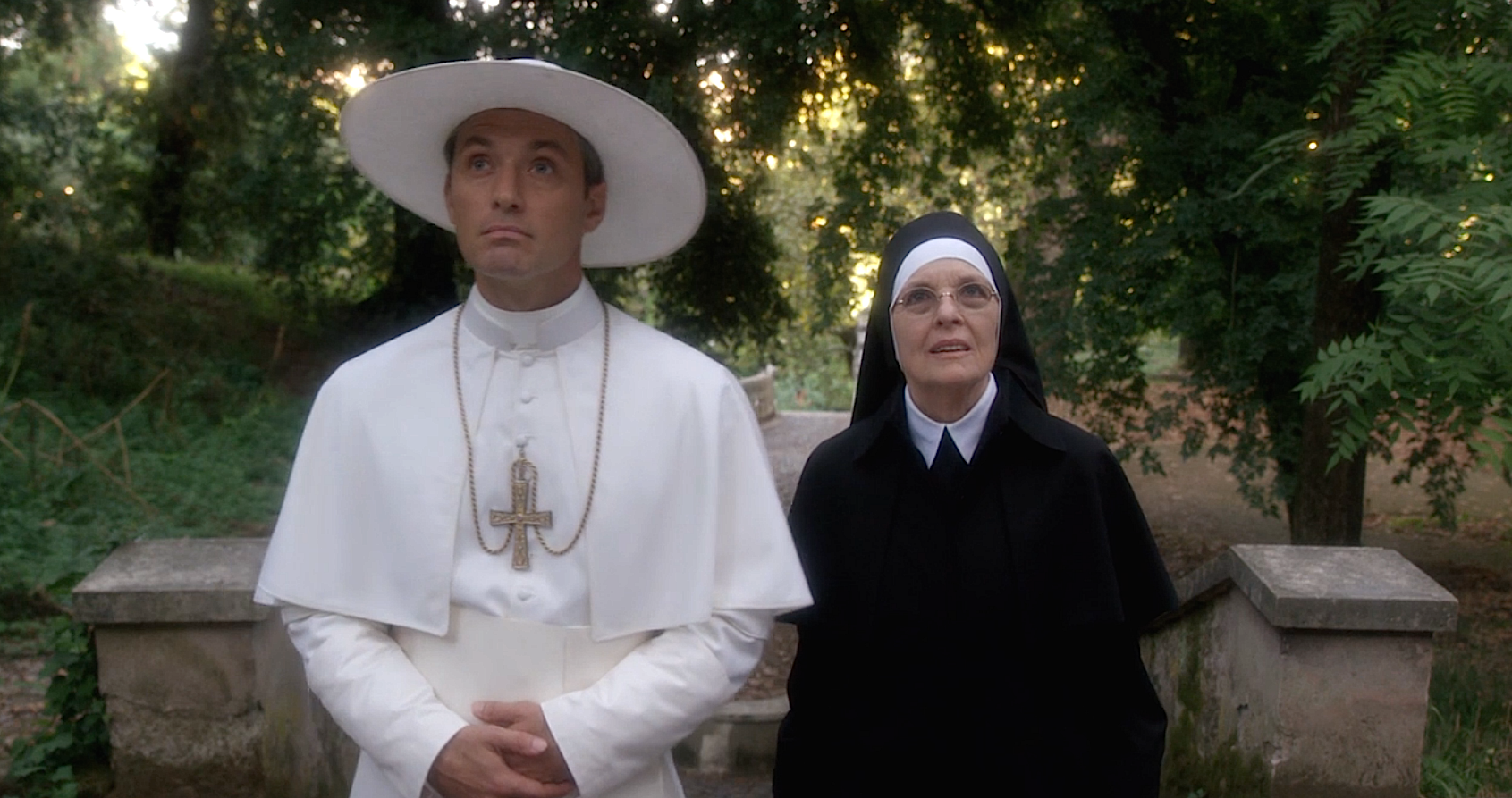 Not only are things going to change with Lenny in charge, but also he doesn’t trust anyone. In order to keep a firm grip on power, he manipulates a priest, Father Amatucci, into hearing the confessions of others, and then reporting their sins back to Lenny. He’s gathering ammunition, tucking away the information he gleans from these confessions to be brought out and used at a moment when they will be most effective. After his dressing down of Voiello, the Cardinal Secretary of State has begun his own investigation into Lenny to get dirt on him to be used to regain power over him. Who will end up with the upper hand? 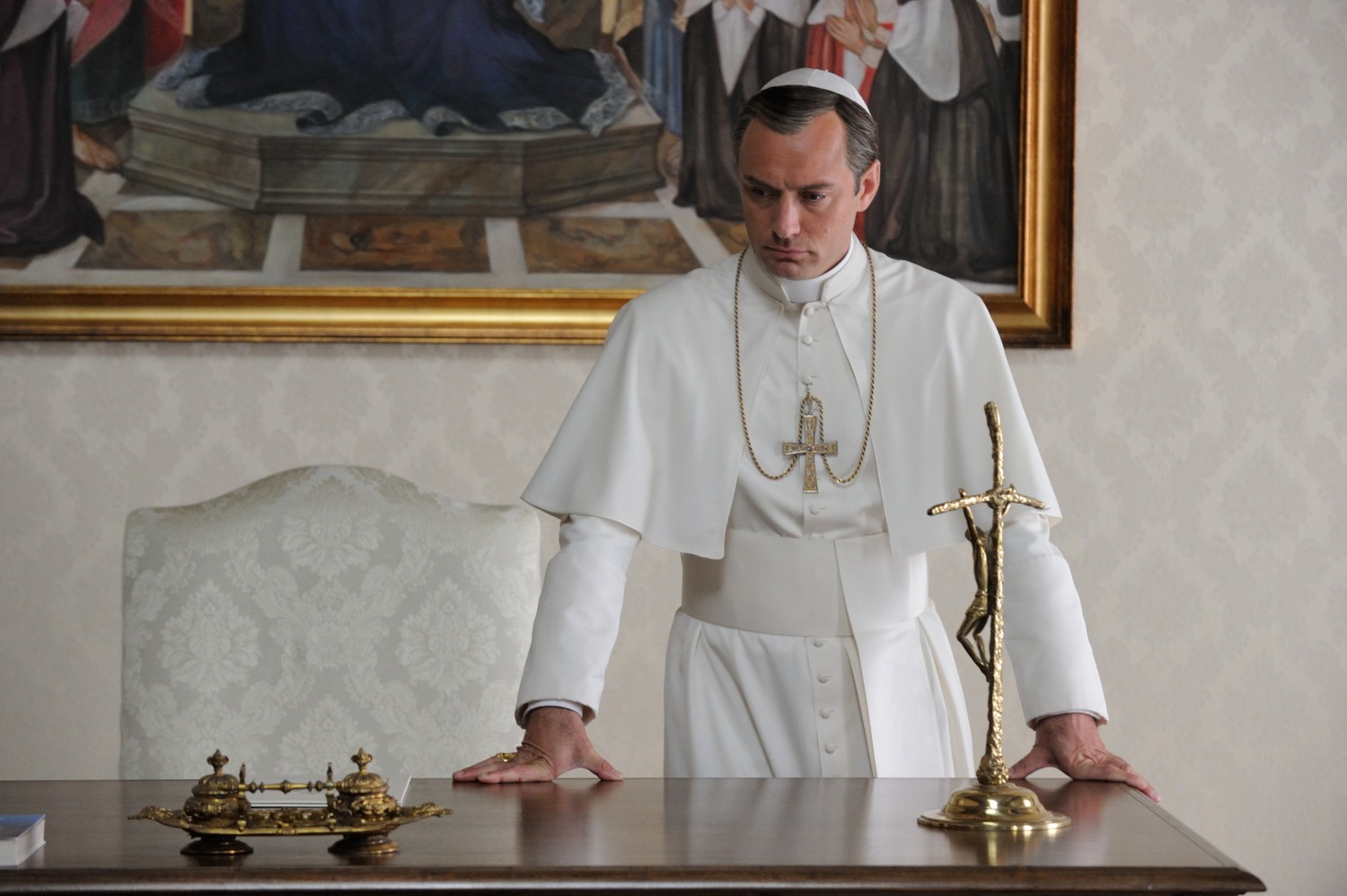 The Young Pope does a wonderful job setting the tension between the old guard and the new, as Lenny’s rise to power puts everything that’s come before him at risk of changing. The power struggles behind the scenes are where the tension and drama comes from so far in the series. Lenny comes off as a shrewd businessman in the American style. He’s a no nonsense person who knows what he wants and clearly is not afraid of stepping on people to get it. How will this go over? Will he crush all those who oppose him? What really makes Lenny Belardo tick? Will Lenny ever get a Cherry Coke Zero? Hopefully this enjoyable and amusing series will continue to delight.

The Young Pope was written and directed by Paolo Sorrentino, the Oscar winning director of The Great Beauty. This is the first television series he’s written, and it’s a coproduction between HBO, Sky Atlantic, and Canal +. The Young Pope was shot on location in Italy, with the Vatican interiors recreated in the fabled film studio of Cinecitta. The series first aired in Europe last October, and has already been renewed for a second season. HBO will air episodes on consecutive nights every Sunday and Monday for the next five weeks.