The world is in awe of Lenny in the aftermath of his published love letters on THE YOUNG POPE. His image has softened, and he gives a public address where people can actually see his face for the first time. Kurtwell awaits his trail in Vatican City, and Sister Mary takes over a new important role in the Church.

In an amazing turn of events, Lenny’s published love letters have taken the media by storm. Everyone is moved by the passion in these writings that show the inner workings of the mysteriously absent Pope. Is this what Lenny planned on all along? Has the mystery of shutting himself off from the public made them crave this revelation of his true feelings even more? If so, it’s one of the most ingenious plans and must have been set up ages ago. Did he play a long con against Kurtwell? How did Lenny know Kurtwell would only half read them and mistake what they really were. How can Lenny, who has been so cold and distant, suddenly be so warm and caring? 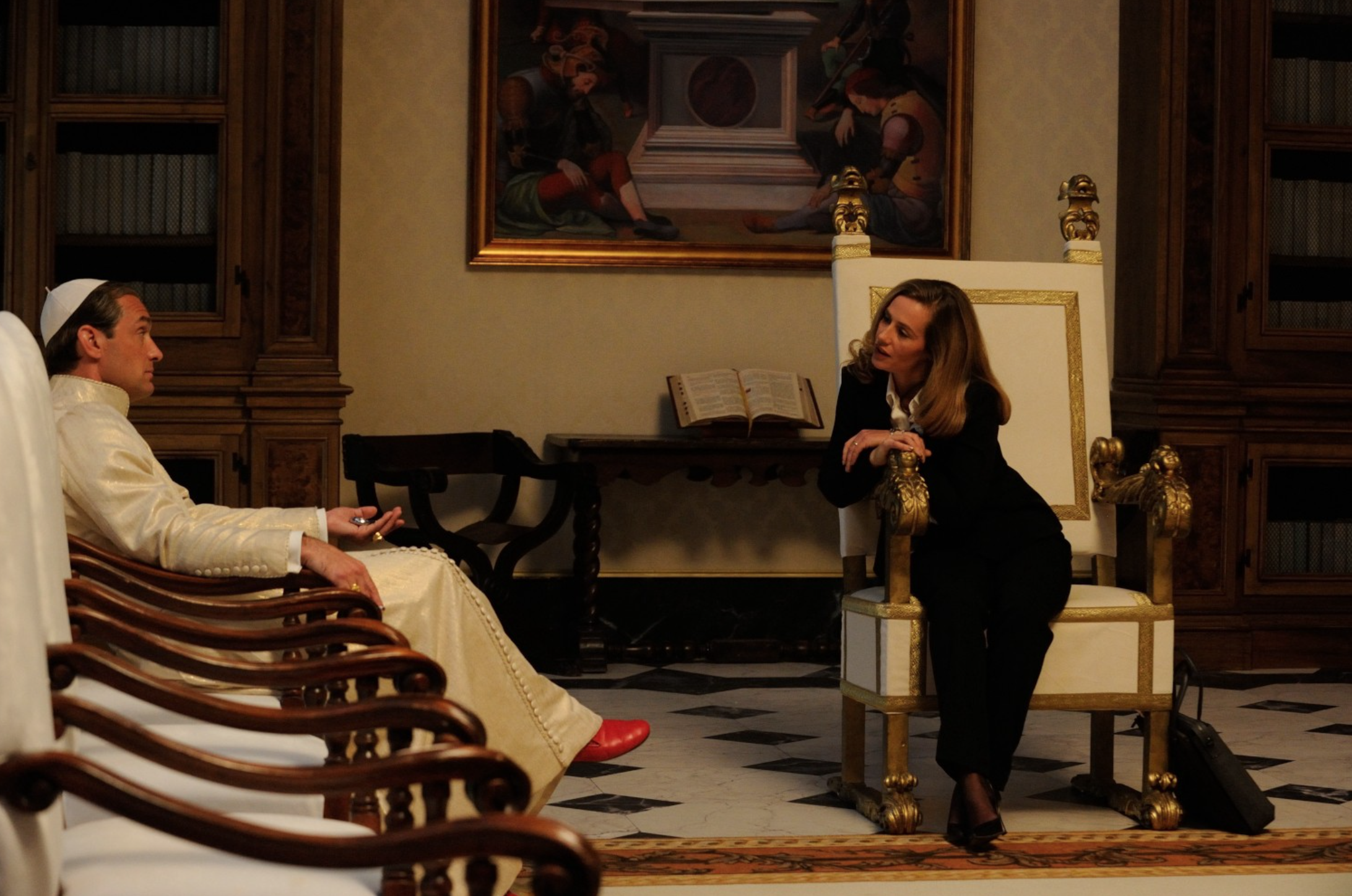 The loss of Lenny’s parents, and their abandonment of him at such an early age drive all of his motivations throughout the season. Lenny could not see God, because he could not see his parents. He fixated completely on the discovery of them, even to the point where he allowed himself to be momentarily duped by a set of imposters. In his dreams he returned to memories of what his hippie parents looked like when they left him at the orphanage with Sister Mary. The mystery of these two people overtook the mystery of God in his life, to the point where he closed himself off entirely, and was unable to either see or believe in God even as Lenny became the Pope.

The rigidity of his views is in complete opposition to his parents. They were hippies, and Lenny became staunchly conservative almost out of a subconscious retribution towards them for abandoning him. His fellow Cardinals and peers urged him to be more compassionate, love the sinner but hate the sin, do not be so strict, allow himself and the Church to be more inclusive instead of exclusive, but he could not be swayed. In order to change his point of view, he’d have to let go of the pain and the scars of losing his family and realize he’d built a new one with Sister Mary, Cardinal Spencer, and Andrew.

The loss of Andrew wasn’t enough, it hurt, but it didn’t change his point of view or soften him in any way. It was Spencer’s death that finally opened his heart and made him feel again. Though they butted heads to the end, Spencer was really his father, and Sister Mary was his mother. His breakdown at Spencer’s death bed, his announcement to his staff that he loved them, sending Sister Mary to Africa to take Sister Antonia’s place and do what she loves best, help children, all of this allowed him to really put the past behind him and grow up. 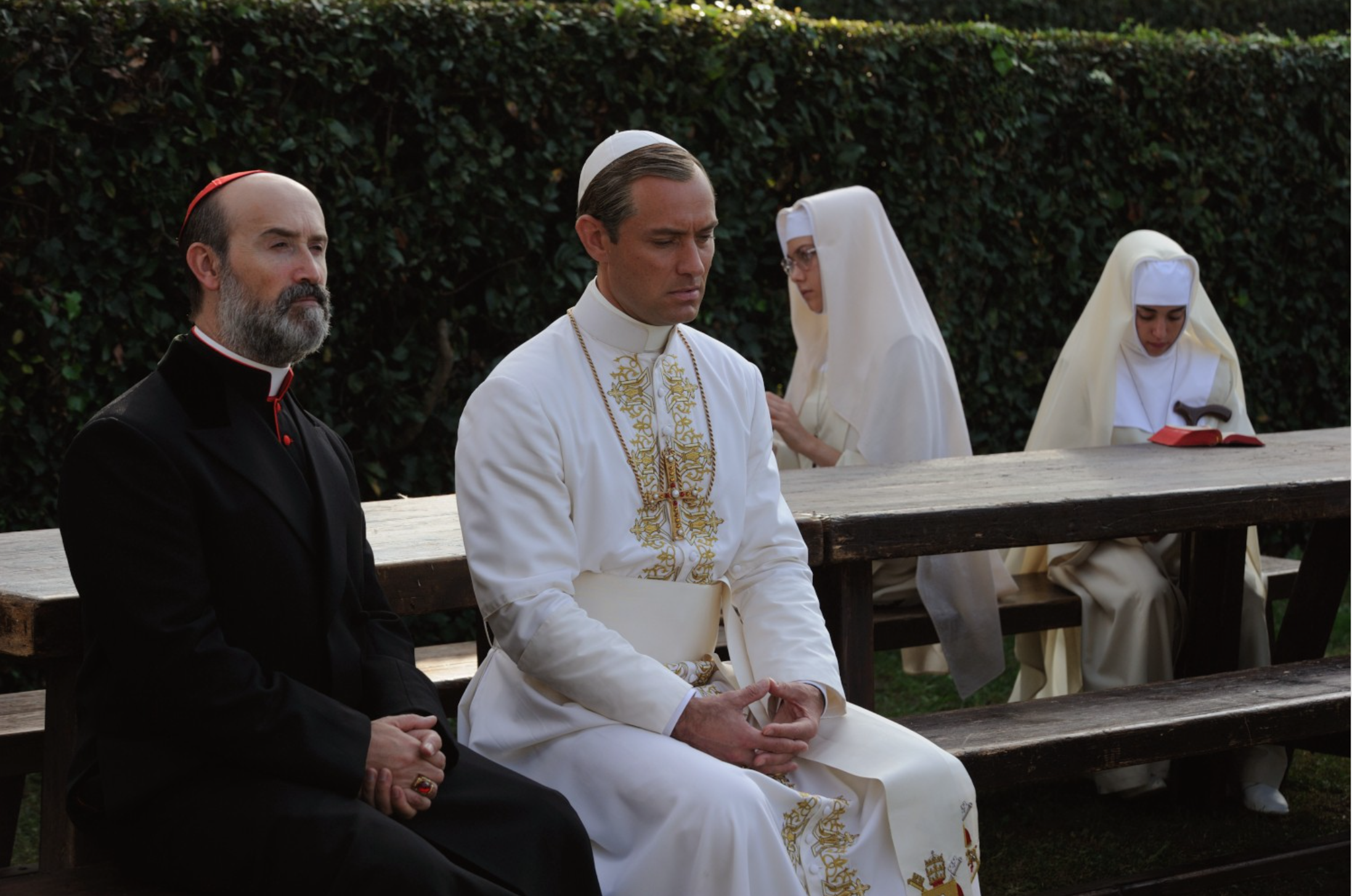 Gutierrez has also really grown as a person since Lenny first met him. Sure he still struggles with alcohol, but instead of being timid and afraid all the time, he’s turned that fear to anger. When Lenny asks Gutierrez to be his personal assistant, we get a glimpse of the man Gutierrez has become. He has no problem saying no to Lenny, or forcibly pointing out Lenny’s stance on homosexuality is a personal affront to Gutierrez who is himself a homosexual. The lumping of homosexuals with pedophiles is offensive to him, and it’s why he can’t take the position. It would be too hypocritical. Lenny shows his own growth when he tells Gutierrez he knows he’s a homosexual, and his asking Gutierrez to become his personal assistant should show Lenny’s growth and acceptance of homosexuals within the church.

Though Lenny has changed a lot over the course of the season, he’s still able to use vindictiveness and humiliation when it serves him. During Kurtwell’s interrogation we see him retell a childhood story from the last episode, but change it to make him appear a victim. He manipulates the retelling of the story to explain why he himself had become a predator of children. It’s disingenuous and Lenny sees right through it. He tells Kurtwell he’ll send him back to North America, but Kurtwell has to point out on the globe where he wants to go. Kurtwell’s Parkinsons ravaged hand misses New York, and instead lands on Ketchikan Alaska, a place Lenny has sent other Cardinals to punish them in the past.

Voiello points out to Lenny while playing billiards that his parents are likely still alive and the reason they may not have reached out to get in touch is because they are liberals and Lenny’s views run counter to theirs. Their silence is likely a purposeful, silent condemnation of his actions and beliefs. Can he change their minds and show them he has the ability to grow and accept people? At the end of the episode Lenny addresses the public in Venice and his parents appear in the crowd, aged and unsmiling. They turn to leave unimpressed after his beautiful speech about the Blessed Juana. Lenny has already had heart pains earlier when Sister Mary leaves for Africa, but as his parents turn away he has them again, and collapses. He had just told the crowd, “Someday I will die, and I will finally be able to embrace you all, one by one.” As Lenny lies on his back looking up at the sky, he sees an image of Christ in the clouds with hands outstretched. Is Lenny finally able to see God? 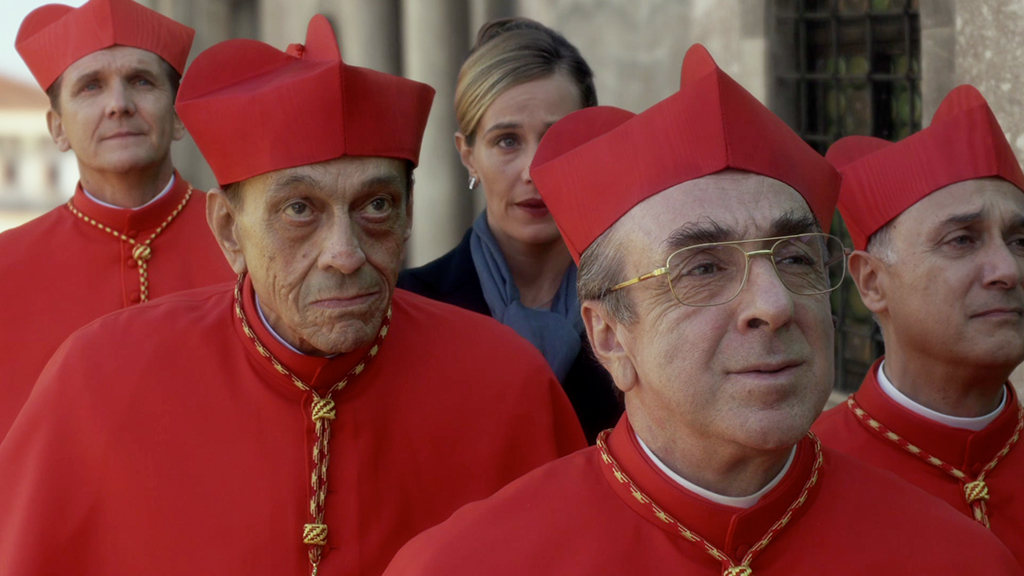 I’ll admit the ending was ambiguous to The Young Pope, and left me wondering what really happened. The camera lifts up from Lenny, collapsed and possibly dying, lifting farther and farther up until the earth is just a distant speck. Has Lenny died? I’m not sure if that’s the meaning we’re supposed to glean from this, but the title “The End” before the credits make it appear closed. The problem is I know The Young Pope was renewed for a second season. I’m curious what comes next. If Lenny has died, how will the story move forward without him? I’m not sure it can, so I’m inclined to believe Lenny hasn’t died. Perhaps he’s only had a near death experience. If so how will it change Lenny, or will it? It’ll be interesting to see what the show creators do with another season of The Young Pope.