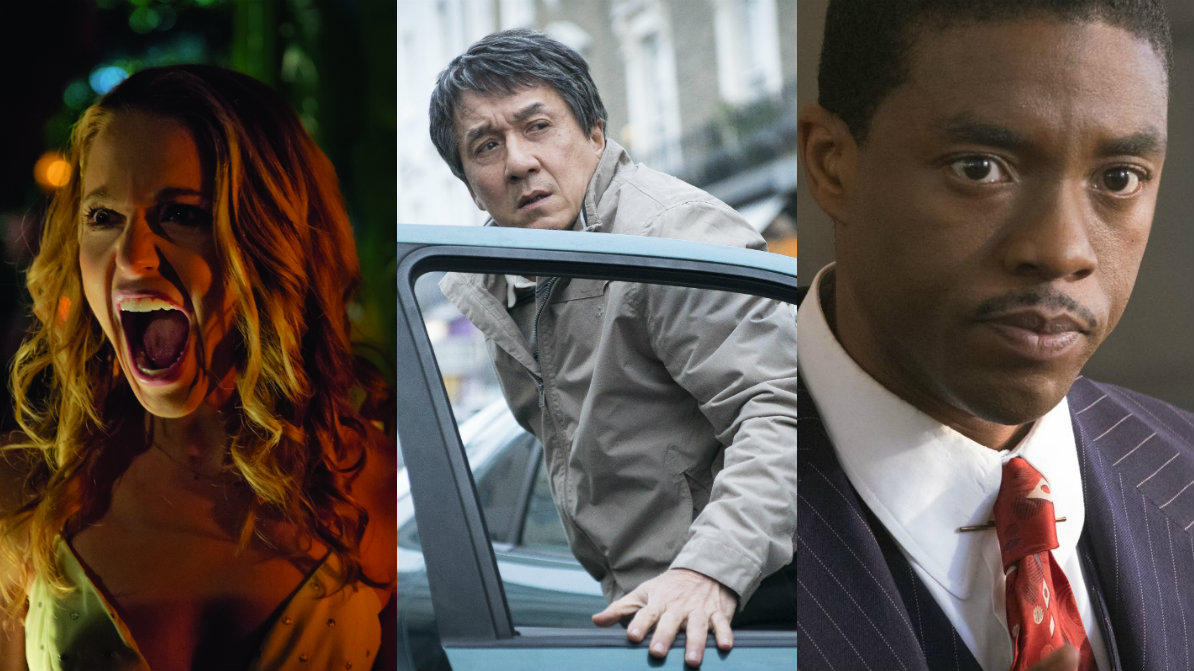 After last week’s attempt at a blockbuster event movie with Blade Runner 2049, October settles down into a lower-profile groove with three to four movies each week but only one with a true chance to break out.It’s sad to say but other than the odd Gravity or Argo, the month of October can be a dumping ground, just to get a few movies off the shelves before the more profitable holiday months of November and December. A breakout hit in October is rare… unless you have a horror movie. 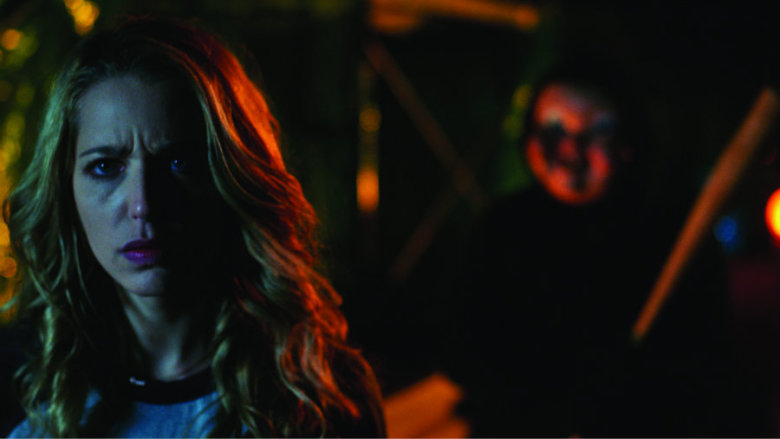 This Friday is the 13th, and not surprisingly, the big movie this weekend will be a horror flick called Happy Death Day from Blumhouse and Universal, a humor-filled suspense thriller about a college sorority girl played by Jessica Rothe (Mary + Jane) who keeps being killed by a masked man on her birthday, then having to relive the same day over and over. Yes, it’s exactly like Groundhog’s Day or the recent Before I Fall but given a horror/thriller twist and actually, it’s a surprisingly fun movie, much better than I expected.

It’s directed by Christopher Landon, writer of many of the Paranormal Activity movies and director of Paranormal Activity: The Marked Ones, working from a script from Scott Lobdell, a name that might be familiar if you’ve read comics in the past 20 years.

While the movie doesn’t have any big stars, Rothe is likely to be a huge breakout from her role that really puts her through the wringer both physically and emotionally. She’s actually very funny, too, which is not something you see often from the lead actress in a horror movie. It gives the movie a tone closer to Scream or even Scream Queens than a darker, slasher flick. I was surprised how much I liked this movie. It’s also a rare horror movie to be screened

It’s probably good to mention again that Friday is indeed the 13th, a day when horror movies tend to do big business as younger college-age moviegoers want to be scared, so Happy Death Day couldn’t have a better release date, although Twitter activity should be higher than it currently is.

Opening in 3,130 theaters — the most of any new movie — we can expect a big Thursday-Friday in the $8 to 10 million range, boosted by Friday the 13th, then a logical drop over the weekend, but it should still have enough juice from word-of-mouth to end up with more than $20 million its opening weekend.

Blade Runner 2049 will drop to second place with around $15 to 16 million, and we’ll have a good chance to see whether word-of-mouth is helping or hurting it after an “A-” CinemaScore.

Next up is a new action-thriller called The Foreigner, starring Jackie Chan and Pierce Brosnan, the latter reuniting with his Goldeneye director Martin Campbell for a movie based on a novel (called The Chinaman) STXfilms are trying to get out there with a lot of money coming from its Chinese production partners.

While Chan at one point was going to be a big star worldwide due to his Rush Hour movies with Chris Tucker, it’s been seven years since he’s been in a major live action release Stateside, and that was the hit Karate Kid, which grossed $176 million. Otherwise, Chan has mainly been doing movies in Chian while lending his voice to animated films like Kung Fu Panda and the recent The LEGO Ninjago Movie. The Foreigner isn’t going to do much for the kiddie audience Chan has generated, and his older fans might be cynical that he’s still got it as an action star.

Pierce Brosnan’s box office track record since vacating the James Bond role isn’t much better with most of his releases like The November Man and No Exit topping out around $27 million, whih is probably what’s going to happen with The Foreigner.

Reviews are pretty good so far, but I didn’t like it, because it was just a grim and dull movie in between Jackie Chan’s fights, and if moviegoers agree with me, the movie will disappear quickly before the end of the month.

There’s a chance that The Foreigner might open with more than $10 million for third place, but neither Chan nor Brosnan are really big enough draws to convince casual moviegoers that this is on par with Rambo or some of the other action films it’s emulating. (It’s also opening in just 2,500 theaters which doesn’t show a lot of confidence for a potential breakout hit.)

My Review of The Foreigner 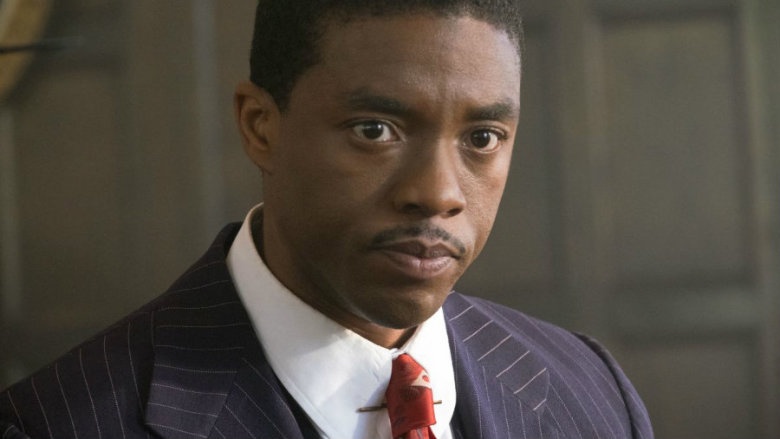 There are two new movies, both real-life stories, getting more moderate releases, and we’ll start with Open Road’s Marshall starring Chadwick Boseman as Thurgood Marshall, telling a story about the first African-American justice from when he was still an attorney for the NAACP, working with Sam Friedman (Josh Gad) to take on the case of a black chauffeur Joseph Spell (Sterling K. Brown) accused of raping and trying to kill his white employer (Kate Hudson).

So obviously this isn’t a comedy like Gad has often done, but more of a serious civil rights film in the vein of last year’s Loving, but this one has a decent cast, including Boseman, star of next year’s Black Panther, and a subject that should interest African-Americans, unlike the other two movies this week. Reviews are decent,  but social media awareness is well behind Kathryn Bigelow’s Detroit over the summer, and that ended up with just $7 million in 3,000 theaters when it expanded nationwide. It certainly help that Open Road decided to open the movie in just over 800 theaters, which doesn’t bode well for it to make more than $4 million this weekend, roughly half what Loving made last year.

Previously thought to be a limited release, Annapurna Pictures is actually releasing Angela Robinson’s Professor Marston and the Wonder Women, starring Luke Evans, Rebecca Hall and Bella Heathcote, nationwide into roughly 1,200 theaters. The nationwide release is risky for sure, but this is an amazing film that will definitely interest older fans of Wonder Woman by telling the story of its creator and origins, inspired by his amazing wife and their lab assistant, with whom the couple end up in a long-term relationship. Even though it’s opening in more theaters than Marshall, I think awareness is considerably lower, and this might have a hard time making $3 million its opening weekend, certainly not enough to break into the top 10.

There are some absolutely fantastic limited releases this weekend, many that I can recommend very highly, including two period pieces based on real stories. 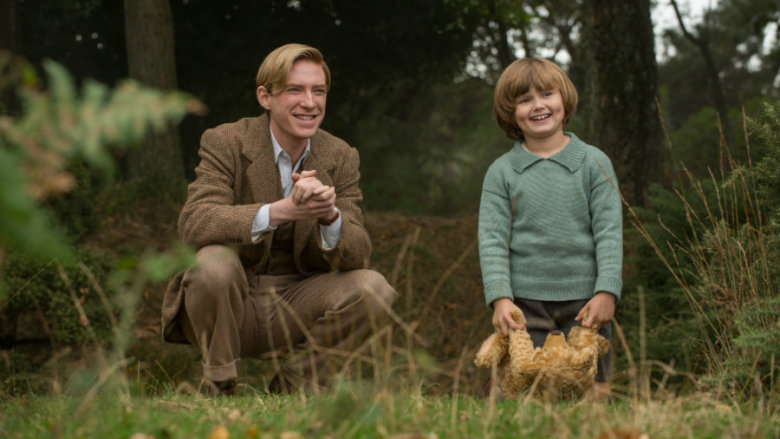 First up is Simon (My Week with Marilyn) Curtis’ Goodbye Christopher Robin (Fox Searchlight), starring Domhnall Gleason (Star Wars: The Force Awakens) as A.A. Milne, the creator of Winnie the Pooh, co-starring Margot Robbie as his wife. The two of them have trouble dealing with their young Christpher, so they hire a nanny (Kelly MacDonald), but Milne eventually has to connet with his young son (played by amazing newcomer Will Tilston) so he does by telling him the stories that would become (you guessed it) Winnie the Pooh. Fox Searchlight is giving this a limited release this weekend.

Andy Serkis makes his directorial debut in another period biopic called Breathe, distributed by Bleecker Street, and starring Andrew Garfield as Robin Cavendish, who contracted polio in the late ‘50s, and was left completely paralyzed, he’s put on a ventilator for life. Along with his wife (Claire Foy from Netflix’s The Crown), Robin struggles with his immobility until he helps develop a mobile ventilator and becomes an advocate for the disabled. Produced by the couple’s son Jonathan Cavendish, it’s a lovely story on par with The Theory of Everything with fine (possibly awards-worthy?) performances by both actors, and it will also get a limited release with possible expansion later this month.

Streaming on Netflix and in select theater is Noah Baumbach’s family comedy The Meyerowitz Stories (New and Selected), which I feel is one of the best movies of his career so far. It stars Adam Sandler, Ben Stiller, Dustin Hoffman, Emma Thompson and Elizabeth Marvel as the most hilariously dysfunctional New York family since Baumbach’s The Squid and the Whale. You can read my review here.

Netflix will also be streaming McG’s new slasher film The Babysitter, which I haven’t seen but I hear is pretty good.

A couple cool docs this weekend including Chinese artist Ai Wei Wei’s amazing Human Flow about the refugee situation across the globe, which will get a limited release by Amazon Studios and Participant Media.

Probably my favorite doc, maybe of the year, is Alexandre O. Philippe’s 78/52, which premiered at Sundance back in January. It’s an amazing in-depth look at the shower scene from Alfred Hitchcock’s Psycho with the likes of Guillermo del Toro, Elijah Wood, Danny Elfman and others analyzing and dissecting that short pivotal section of Hitchcock’s greatest thriller. I’ll have an interview with Phillippe tomorrow when IFC Midnight is releasing it in select cities.

An even lower-key doc release is The Departure from director Lana Wilson (After Tiller), an amazing film about Ittetsu Nemoto, a Japanese Buddhist monk who has made a career of helping suicidal people find a reason to live. It’s a job that starts affecting his health and ability to connect with his young son. It’s a wonderful film and I’ll have more to say about this over the weekend. It’s opening at New York’s Metrograph and will open in L.A. on Oct. 20.

I’ve also heard good things about Finland’s Oscar selection* Dome Karukoski’s Tom of Finland, to be released by Kino Lorber this weekend in New York, then in L.A. and San Fran on Oct. 20, so I’ll try to write something Saturday. (*This is huge since Finland’s primary export Aki Kaurismäki has a new movie out this year as well, but Dome directed a previous Finland selection in The Home of Dark Butterflies.)

The Orchard and Vitagraph Films release Jeremy S. Levine and Landon Van Soest’s doc For Akheem, which follows 17-year-old Daje Shelton, a black girl from St. Louis, through three years of her life.

Other odds and ends including Te Ata, a new movie starring Q’orianak Kilcher from Terence Malick’s The New World playing Te Ata Thompson Fisher, playing Chickasaw storyteller and actress who was friends with Eleanor Roosevelt. That’s being released by Paladin.

Josh Hartnett plays a hockey player stranded in a snowstorm in Momentum Pictures’ 6 Below: Miracle on the Mountain, directed by Scott Waugh (Need for Speed), and I’m not sure there’s more to say about that one or Lucky McKee’s Bloody Money, John Cusack playing a criminal stalking three people in the woods for Saban Films. They’re both VOD specials as is Vertical’s Secret Scripture. There’s also an absolutely awful frathouse hazing thriller called Haze by David Burkman, which I highly recommend you avoid at all costs.

Check back on Saturday morning for an update on how the new movies are faring, then I’ll have a full weekend box office report on Monday.