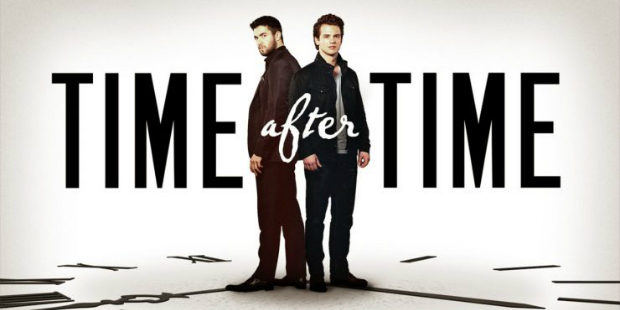 Last episode of TIME AFTER TIME, we left John drugged and strapped to a gurney and at the mercy of a sexyscary scientist lady who knew who he was, and so coming back to seeing him defenseless and confused is legitimately one of the most satisfying things I’ve seen on television in a long, long time. Admittedly I have a knee-jerk no stop this reaction any time a show offers me a lot of violence against women (particularly if this violence is even just suggestively sexual), but I have to give Time After Time at least nominal props for taking John’s shirt and making him stumble to the ground in a fetal position while Brooke looks on coolly.

What was a little less satisfying was returning to Jane and H.G., who ~kissed~ last episode. Jane brings up to H.G. that she doesn’t want to seem like a “harlot” by his Victorian standards which I guess is a reasonable fear, but is just such a weird conversation to watch? And then they also kept talking about “last night” and it’s…a little unclear whether Jane is being really significant about a little make out in deference to H.G. or if they slept together and that’s why she’s a little uneasy.

(Also, though, Victorians were super weird, so I’m not sure how alarming H.G. ought to find all this, especially given he acclimated to computers so quickly. Technology — great and easy to comprehend. Women are independent people with sex drives — baffling magicks. Frankly this seems a little more illustrative of modern day male confusion about women and sex than an out-of-time problem, but whatever.)

Jane and H.G. are interrupted from their somewhat lackluster romantic moment when Vanessa and Doug come in to talk about Chad, the serial killer wall guy who died in the previous episode. Jane and H.G. go to investigate Chad’s apartment, at which point comes the most delightful joke I’ve ever heard in my life. The woman who lets them into Chad’s apartment tells H.G. that she’s into Brits, and that her father was a Brit, and that he moved to the US after WWII. H.G. is like, “there was more than one!?” and totally confirmed that the most delightful part of this show is H.G.’s wide-eyed optimism despite being confronted with 2017 America, which is basically on fire.

In the apartment, they find a paper with the emblem from the letter H.G. wrote Vanessa in the pilot (spoooooky) with some coordinates on it. H.G. and Jane obviously follow the coordinates with the time machine back to Vanessa’s childhood home in the eighties. Jane insists on coming along because she’s a historian, but she also makes no effort to ensure that they’re in any way aesthetically prepared to step a couple decades into the past. When they get there, Jane unbuttons H.G.’s collar and pops it, saying she needs to make him look yuppie — really he just looks like a modern douchebag rather than an 80’s douchebag, but apparently nobody is paying attention to their utterly anachronistic clothes anyway.

At the garden party the Anders are having, Jane and H.G. meet a tiny, adorable Vanessa Anders, and then also casually witness her dad murdering Chad’s father. What doesn’t seem to be addressed at any point is the fact that, if Vanessa is H.G.’s biological issue, that means her (white) dad is probably H.G.’s kid or something, and so seeing him murder somebody should probably be a bit more emotionally disturbing to everyone involved. We get the buzzwords “Project Utopia”, referring to the files Vanessa’s father basically killed Chad’s father over, so that’s going to be important later, probably.

Meanwhile, John breaks out of captivity in what is maybe the most frustrating sequence of incompetence, ever. Brooke lets John walk around totally uninhibited because she has this security guard standing by with a tranq gun, only he doesn’t use it until John actually escapes the lab and runs into this human rage monster Brooke is keeping in another room. It’s a little unclear whether Brooke wants to study John to fix his crazy murderous impulses or to bottle them, and it’s also wildly unclear whether she thinks John is a superior being because he’s Jack the Ripper or because he’s time traveled. We do find out, though, that Brooke has done her research — John had a kid back in in his time he didn’t know about, in Paris. But when she goes to see to the human rage monster after he beats John up, John is left alone with the security guard and an open case of tranquilizers, which he obviously grabs and stabs the security guard with.

Important: where are these people hiring security from, and can we all make a note that nobody in any show should ever hire them again? This show has a real problem with giving idiot balls to literally everybody, and it’s very frustrating to watch. John would be a much more interesting character worthy of the awe he seems to inspire if he ever actually had to figure his way out of a situation cleverly, instead of just strolling through his problems whistling a jaunty tune because everybody around him has a two digit IQ on a good day.

Anyway, John escapes because Brooke won’t shoot him. John then goes to the party Vanessa is throwing in the present day to steal the time machine. And surprise! Brooke is there too. She’s Vanessa’s shady boyfriend’s sister, so now we know there’s definitely some larger conspiracy going on here, and Vanessa is being taken for a ride. Her shady boyfriend — whose name is Griffin Monroe, by the by, I just have a problem with nicknames — is shady, for the record, because “Project Utopia” was stolen from he and Brooke’s father (presumably) by Chad’s father, and then once Chad’s father was dead, was stolen by Vanessa’s father. There’s some serious extended family beef here, and while we kind of have the framework of the personal conflict here, we still don’t know what on earth it is, beyond an “ironic joke” for H.G.

As H.G. and Jane are talking about their trip to the 80s, Jane remembers she knows a document specialist, because instead of being useful, apparently Jane’s function now is to be a proxy for useful people. We need a gem! By golly, Jane knows a guy. We need to find out what Project Utopia us! Amazing, Jane knows that person too. To add insult to injury, Jane then goes off to get her phone to contact the document person, only to get cornered by John, who’s marauding the party with a kitchen knife. Useless AND damseling, the power couple. I really like Jane and think Genesis Rodriguez is very endearing and sharp, but apparently this is not something the writers really care about.

Luckily, it’s a rich person’s house, so there are security guards. Less luckily, they’re Vanessa’s security guards, and so they’re completely goddamn useless. John manages to stab a security guard, even though it’s like, literally the security guard’s job to ward against something like this. All this incompetence leads to John finding his way to the time machine, hopping inside, and traveling back to Paris in 1918, presumably in search of his long lost kid.

Overall, the episode is fine — it’s not painful to watch, the actors are all fairly enjoyable, we’re getting a bit more information, but there’s more stiff, network-y writing in this episode than one might like. At multiple points we’re basically given explicit recaps of what happened episodes prior for new viewers, and in a show that seems to have a lot of mythology and plot to cover, there’s a weird amount of dialogue that’s just cliches (“it’d be easier to find if we knew what we were looking for”, and such) instead of something functional. Also, adding time travel as something that regularly occurs as part of the show seems to just be asking for trouble — especially since in this episode we establish that the time machine can be controlled via a computer, now, which seems BAD since one of the people with seemingly unrestricted access to Vanessa’s house is shady mother-effer Griffin Monroe — logistically speaking… but we’ll see how that all breaks down next Sunday.