Flynn travels back in time to 1969 on TIMELESS to disrupt the Moon landing and find a woman who works at an aerospace company. Can Lucy, Rufus, and Wyatt foil his plans before he ruins this achievement, or will Anthony’s help assure the astronauts never return from the Moon?

Anthony hasn’t played a huge part in the series so far, but he lingers in the background of things all of the time since he’s the person who designed the time travel vessels and has clearly left to help Flynn do whatever he’s doing. How does a good guy go bad like this? What is it Flynn has told Anthony that Rittenhouse is going to do with his invention that’s got him so shook up he becomes a criminal accomplice? How could a scientist who reveres the men and women behind the Moon landing sabotage such a great achievement? 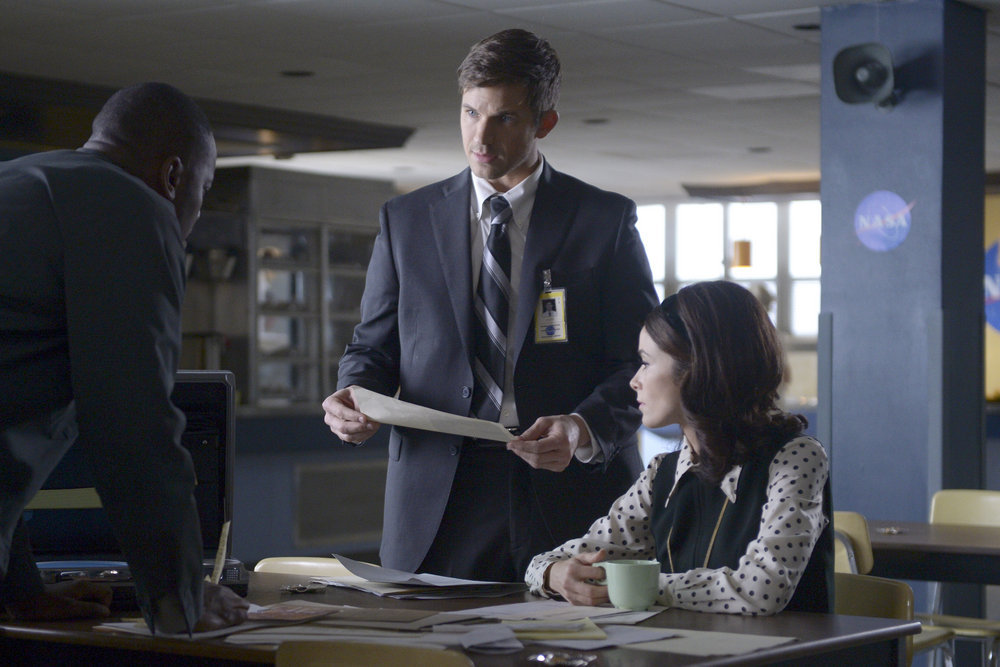 So far Rittenhouse’s intentions are unclear. We know they’re the guiding hand behind history since the founding of the country, but what is it they are going to do that is so bad? Flynn claims they killed his family after he alerted someone in the government about illicit payments from Rittenhouse to Mason Industries, but at this point we have to take his word for it. It’s possible he’s telling the truth, but on the other hand he could just be a deranged psychopath. His goal is to disrupt history and alter the course of events in the hopes that by doing so he could possibly destroy Rittenhouse. It’s hard to fathom what Rittenhouse could do that would be so disastrous.

In order to gain access to NASA on the day of the Moon landing, Anthony and Flynn pose as journalists writing a story about the event, and show up at a retired Guidance Officer’s house to find out about that day. What they want to know is about security, how tight it was, and what they’d need to get in unnoticed. He’s helpful, but doesn’t have the key card they need, so when they travel back to 1969 they land in his back yard, kill him, and take the key card to access the computers operating the Moon landing. Lucy, Rufus, and Wyatt follow after Flynn blind and unsure of what his intentions are.

The covers each of them are given are indicative of where each of their sexes or races were in the pecking order of things back then. Wyatt poses as an FBI agent, which gives him access to everywhere, but the best part is when he has to show his credentials and in a nod to the X-Files, we find out his name is Agent Mulder. Lucy must pose as a secretary at NASA and deal with the constant groping and sexual harassment that went with it. She’s able to stand up for herself in front of some of the other secretaries and give them the confidence to shake off the same kind of treatment. Rufus, being a black man, must go into NASA posing as a janitor, but turns out to be the person who saves the day in the end. 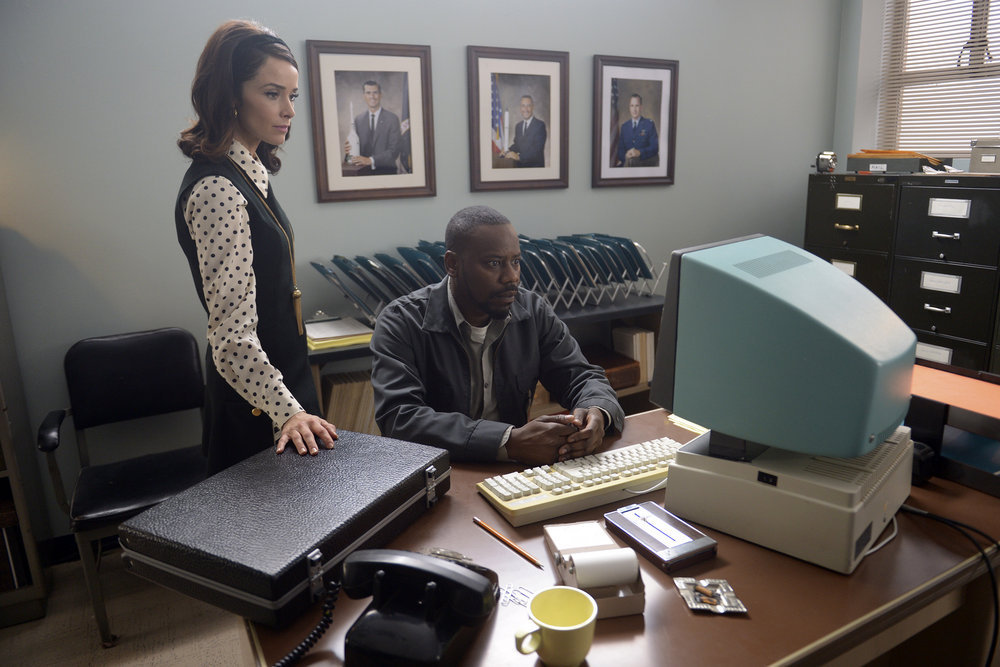 Timeless is not just a fun adventure television series, but historically they tend to shine a light on the unsung heroes of history. Katherine Johnson is not well known, but she should be. She was one of the best mathematicians at NASA, but you don’t hear much about her since she was a black woman. If it weren’t for her and her calculations, Apollo 13 would have never made it back to Earth. Because of her gender and race, she was relegated to working in the basement, but she was the smartest person there. So when Anthony sabotages the computers at NASA with a very rudimentary virus that breaks all contact with the astronauts, Rufus seeks her out to help him fix the computers and save the day. First he has to convince her he knows what he’s talking about, but after showing her some equations of how to get the astronauts back she believes him, and helps him fix the problem Anthony started. When Anthony confronts Rufus to stop him from correcting the computers, Rufus’s true colors shine. When we first met him he was scared of everything, and he even spared Anthony’s life once before because they were friends, but Rufus has changed. He kills the thug with Anthony, and before he can kill Anthony as well, some computer engineers interrupt them, and Anthony escapes.

Flynn follows a woman and her child while Anthony is preoccupied with his NASA excursion. Who is she, and what does Flynn want with her? At first it seems like he wants some technology she may develop in the future, but the truth comes out in a relatively short time when the woman finds Flynn injecting her son with something on the porch while Wyatt interviews her. This woman is Flynn’s mother, and he remembers her being so sad about the death of his half-brother from a bee sting, so he’s travelled back in time to save his brother so his mother won’t be sad. It works and he saves his brothers life, but it also hurts Lucy to see that this is possible since her own sister has been erased from history. If Flynn can prevent the deaths of his loved ones, why can’t they? Lucy would love to save her sister, and Wyatt his wife, but as long as Flynn is out there, the government won’t let either of them do this. 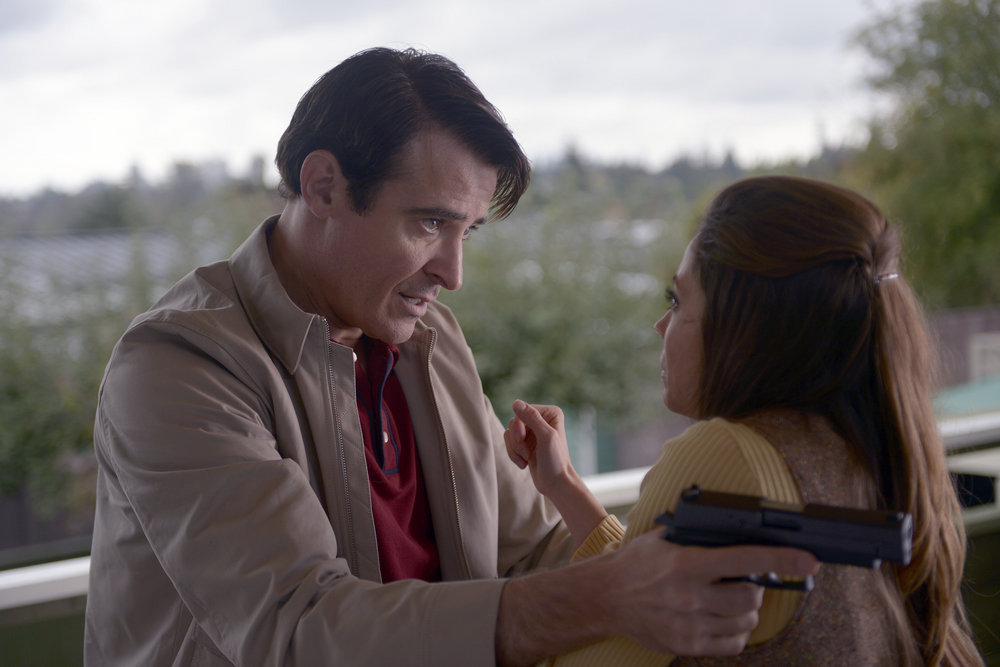 Timeless continues to entertain and teach a history lesson at the same time, all without a moment of dullness in the entire season. It’s quite a feat, and one its creators should be proud of. It continues to be one of the most entertaining shows on network television.