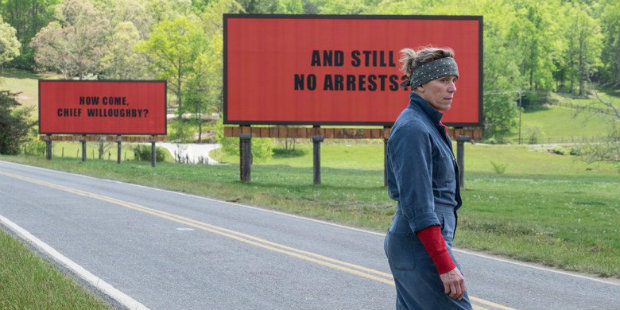 The 42nd Toronto International Film Festival (TIFF) comes to a close today, but not before TIFF announced its annual award winners. The winner with biggest interest each year is the Grolsch People’s Choice Award, because many of those winners have gone on to be nominated or even win the Oscar for Best Picture months later.

This year, the coveted award went to THREE BILLBOARDS OUTSIDE EBBING MISSOURI, the new crime drama from Martin McDonagh (In Bruges), starring Frances McDormand, Sam Rockwell and Woody Harrelson. McDormand plays a mother who is angry that the police haven’t found her daughter’s murderer, so she sets up three billboards outside the town to let people know she isn’t happy.,

The winner receives a $15,000 crash prize and a custom award, sponsored by Grolsch. Three Billboards will be released by Fox Searchlight on Nov. 10, and it was just pulled from the upcoming Fantastic Fest due to recent controversy.

Runner-up for the award was Craig Gillsespie’s I, Tonya, starring Margot Robbie, while second runner-up was Luca Guadagnino’s Call Me By Your Name.

The Grolsch People’s Choice Midnight Madness Award went to Joseph Khan’s Bodied, while runners up were Brawl in Cell Block 99 and James Franco’s The Disaster Artist.

The People’s Choice Award for documentary went to Agnes Varda and JR’s Fa, while Morgan Spurlock’s Super Size Me 2: Holy Chicken! and Jennifer Baichwal and Nicholas De Pencier’s LongTime Running were runners up.

The Toronto Platform Prize, presented by Air France, went to Warwick Thornton’s Sweet Country, which receives a custom award and a $25,000 cash prize. The jury for this section was made up of award-winning filmmakers Chen Kaige, Małgorzata  Szumowska and Wim Wenders.

The awards were given out at the festivals closing ceremony at the TIFF Bell Lightbox, hosted by Piers Handling, CEO and Director of TIFF who is stepping down after this year, and Cameron Bailey, TIFF’s Artistic Director. You can see the full list of awards winners on the Official TIFF Site.