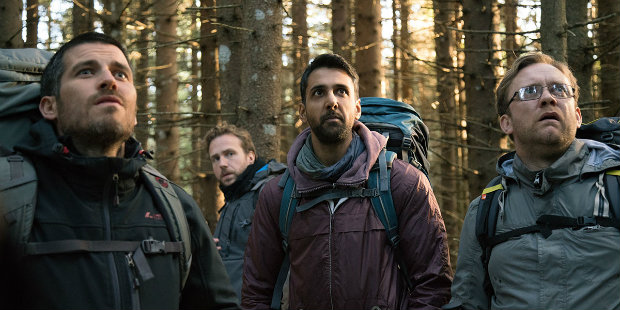 Although this years’s Toronto Film Festival is over, that doesn’t mean all its potential sales are finalized. In fact, film sales should continue to be announced over the next few weeks. The latest movie to be picked up by Netflix is David Bruckner’s The Ritual, which premiered in the “Midnight Madness” section on Sept. 8 and immediately drew interest from a number of buyers.

Netflix has reportedly paid $4.75 million to eOne for the worldwide rights outside the United Kingdom. That’s just less than the $5 million paid for Louis CK’s I Love You, Daddy and Margot Robbie’s I, Tonya by The Orchard and Neon respectively.

The movie was written by BAFTA-nominated screenwriter Joe Barton of Humans, adapted from Adam Nevill’s award-winning horror novel. It follows a group of four friends — played by Rafe Spall, Robert James Collier, Arsher Ali and Sam Troughton — who are hiking through the Scandinavian wilderness after the death of a mutual friend. They make one wrong turn and they encounter an ancient evil that starts following them through the ancient forest.

eOne produced the film with the Imaginarium and fully financed the film for the UK distribution rights. The Imaginarium producer Jonathan Cavendish, who was also at TIFF with Breathe the very personal story of his parents directed by his Imaginarium production partner Andy Serkis, developed The Ritual with co-producer Richard Holmes. Will Tennant and Phil Robertson from Imaginarium are exec. producers as are Serkis and Moonriver Content’s Xavier Marchand, who oversaw the production along with Lara Thompson from eOne.

Bruckner has directed segments for the horror anthology films The Signal, Southbound and V/H/S.

WME Global negotiated the deal for the filmmakers.

The Hollywood Reporter first contributed to the story.