The last two episodes of True Detective have unveiled an intriguing and satisfying conspiracy, revealing the puppeteer orchestrating the cover up of the Purcell children’s murder and kidnapping, and illuminating a connection to season one in the process.

The real pivotal point in this seasons investigation comes when Julie calls the tip line asking to be left alone, and insinuating that Tom did something either to the kids or was a bad person they needed to escape from. Julie also has no idea Will is dead, and refers to looking for her brother. She says that Tom isn’t her real father, which is why Blevins and Kindt ask Wayne and Roland to go after Tom hard in the interrogation room. Roland knows deep down that Tom had nothing to do with any of it, and actually likes Tom and has helped him in the aftermath of the tragedy of his kids. Neither of them wants to push Tom on this, but if they don’t do it, Blevins will bring in someone else to do it, and things might go worse. Wayne and Roland already know Kindt and Blevins pinned the Purcell kids murders on Woodard before, who was innocent but convenient, and now have Tom queued up to be the new patsy with the evidence about Woodard being questioned. The detectives can feel them itching to do the same thing to Tom. 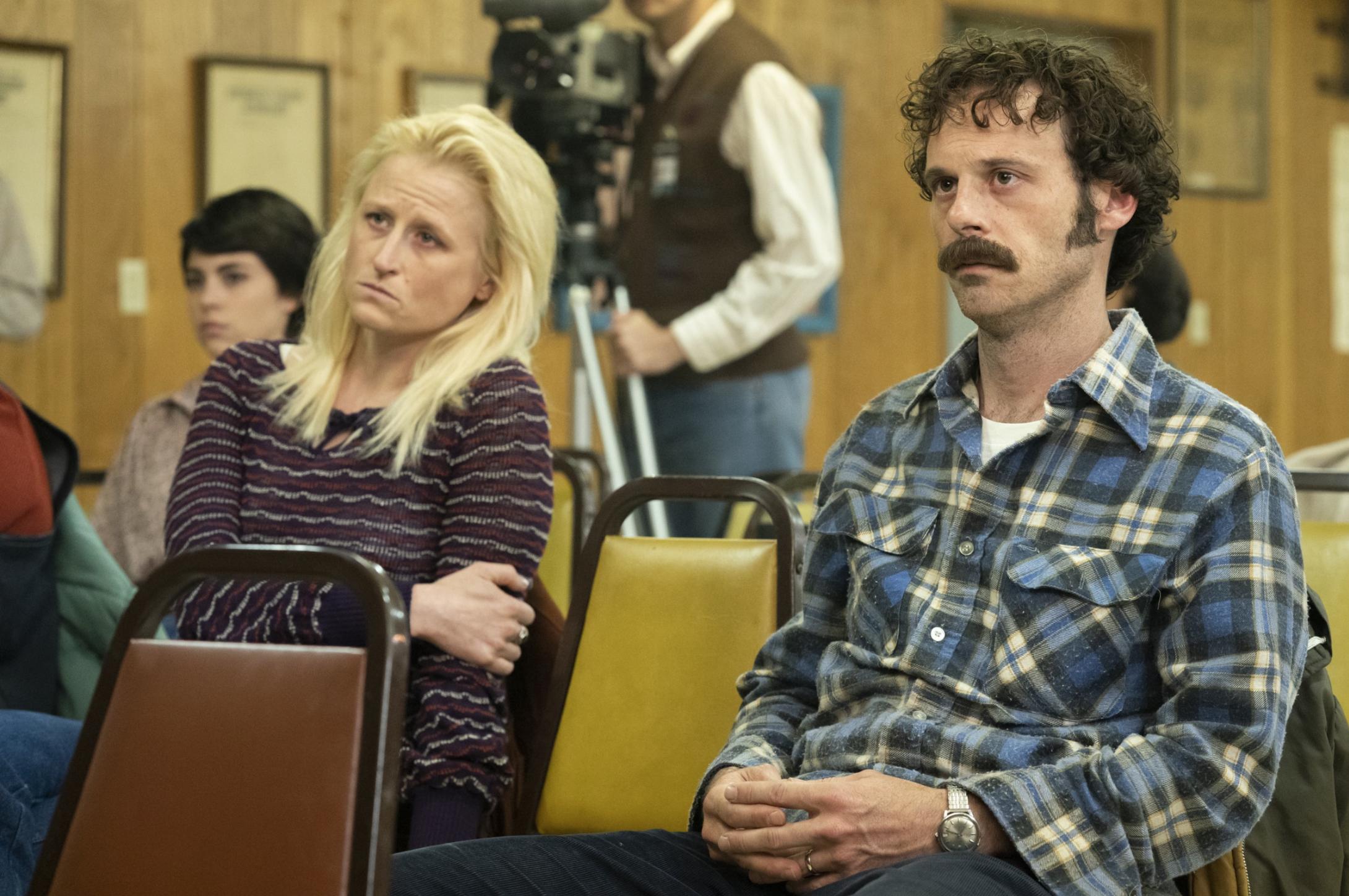 To further muddy the waters of fact and fiction, cousin Dan comes out of the woodwork to offer information about what happened to Julie if Wayne and Roland can get him $7,000. Dan tells them Tom had nothing to do with it, but implicates Lucy as an accomplice to what happened to Julie. Dan is paranoid and shaky, partly to do with being a junkie, but also out of fear of what the people responsible may do to him. He claims Lucy’s overdose death was staged, and she was actually murdered for asking for more money from whoever took Julie. It’s this bit of information that makes Wayne request the phone records for the motel room Lucy was staying in when she died, and it’s these records which will eventually lead Wayne and Roland to at least some of the truth of what happened.

Wayne’s relationship with Amelia is a contentious one. They’re either fighting or fucking, but never really connecting on an emotional level. It’s a shame, because Amelia has shown herself to be just as astute a detective as Wayne. If they could have pooled their resources, it’s possible they may have been able to solve the case, but Wayne built a wall between himself and Amelia shutting her out. When he finally reads her book, he finds things she discovered that could have helped him at the time. There are connections between her discoveries and his that push old Wayne to connect with Roland again to finally finish their case. The ghost of Amelia pushes Wayne to solve and finish this case, and presumably once he has, he’ll use the loaded handgun on his desk to join her in the afterlife.

Harris James has been a person of interest and mystery since Ms. Montgomery mentioned him during her interview with Wayne. He went missing after the 1995 reopening of the Purcell case, and it’s not just him. Nearly everyone involved intimately with the case are missing or dead. Wayne and Roland’s interview with James is an interesting moment. Not only is James a smooth talker with all of the answers, but he makes a comment about Wayne’s body before the two detectives leave, and it’s this comment that is just unsettling enough to raise more doubts about Harris James and what he may or may not know. His ascension to head of security at Hoyt, and the big paycheck that comes with it, seems odd to both Wayne and Roland. There must be more to the story than just luck and being qualified.

In the aftermath of Wayne and Roland’s interrogation of Tom, the Purcell father is pissed off, and storms up to Roland’s office looking to give him a piece of his mind, but instead overhears a couple of task force guys talking about Cousin Dan being back in town. It doesn’t take much for Tom to find Dan, and once he does, he beats the information Dan was going to give the detectives out of him. The only thing Dan had was a name, and that name leads Tom to Hoyt’s mansion where he breaks in and discovers a hidden pink child’s room at the end of a long, dark tunnel with fortified doors. What he finds astounds him, but Harris James comes up behind him. We don’t get to see what happened, but in episode seven when Tom’s body is discovered at the lookout tower at Devils Den State Park with a suicide note, it’s not hard to figure out what happened. James has staged Tom’s suicide to cover up his murder. Did he do the same thing to Lucy? 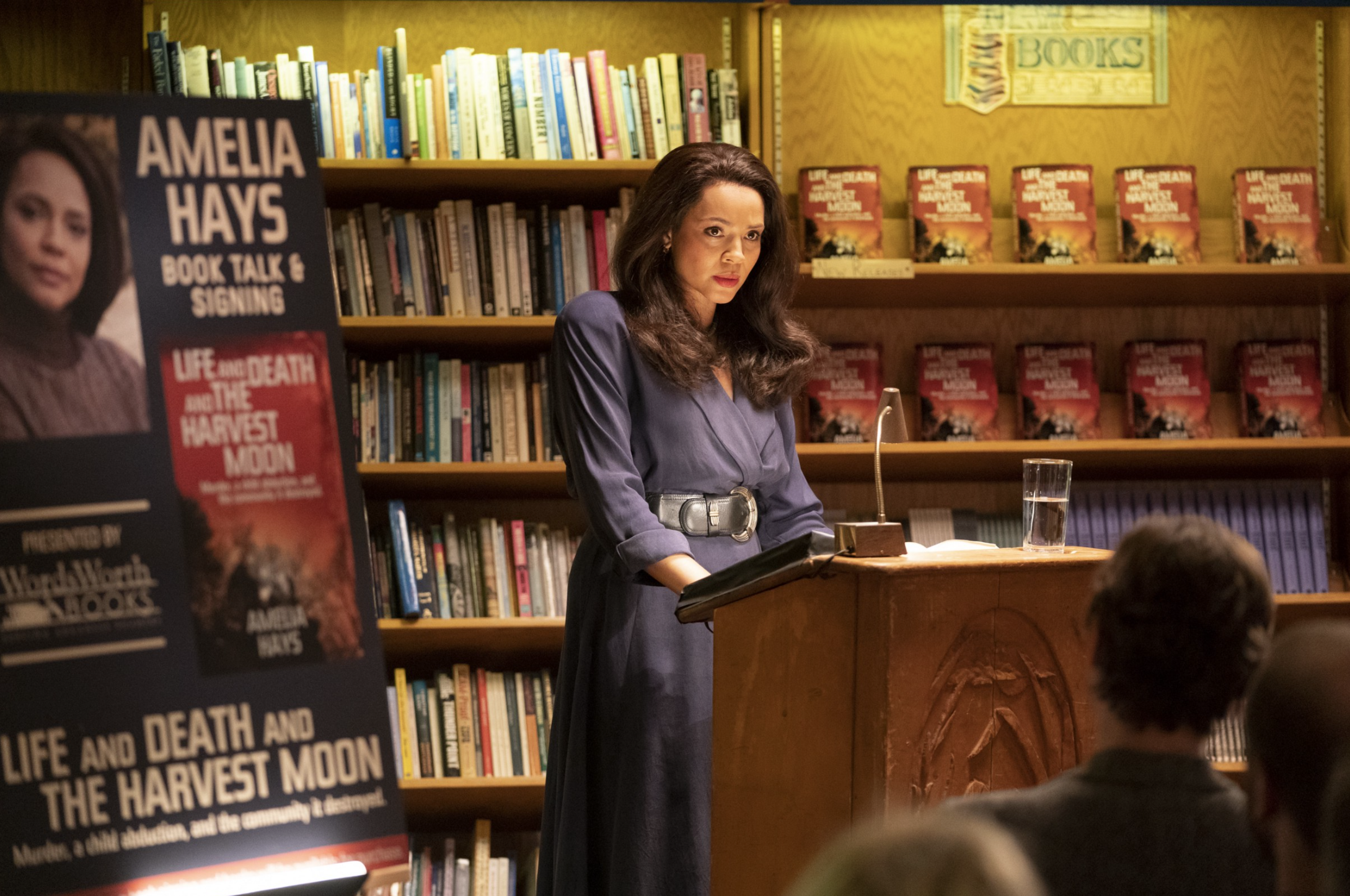 Amelia also has a run in with a one eyed black man at her book reading that leaves her shook. His demeanor and accusations unsettle her, and when she tells Wayne, it fuels his drive to finish the case and find the truth even though Kindt has now held a press conference inferring that Tom killed himself and left a note insinuating he was responsible for everything. Wayne and Roland know this isn’t true, but the case is closed once again, and just like last time, conveniently pinned on a dead man. Both Wayne and Roland feel guilt about what happened to Tom, as if they pushed him to suicide, only Wayne doesn’t think Tom would write a suicide letter saying he missed his wife, knowing Tom and Lucy’s contentious history and Tom’s homosexual secret. Roland wants to let things go, Tom’s death is especially hard on him since he’d helped Tom after the tragedies and grown to like him as a person. 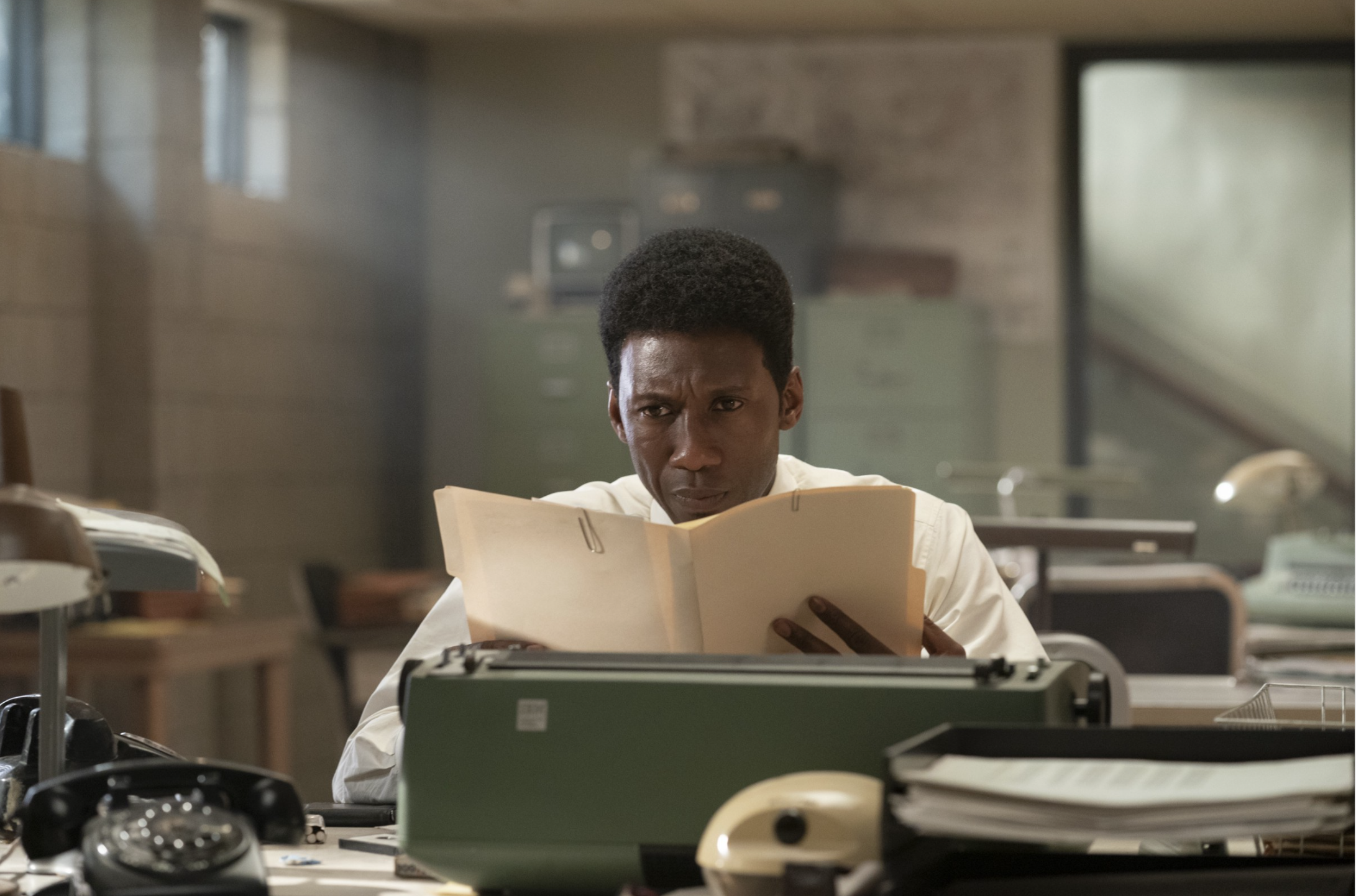 True Detective has been playing around with something bad Wayne and Roland did in the past. It’s something Wayne can’t remember in 2015, but we finally see what it is. As the Purcell case is closed once again in 1995, the phone records from Lucy’s hotel room come through. What Wayne finds there, ties Lucy to a group called the Ozark Trust, and Wayne uses the property records for the trust to tie back to Harris James. He then gets passenger manifestos for flights in and out of Las Vegas during that time period, and lo and behold, Harris James flew into Vegas the day before Lucy died, and flew back out the day after. He now has definitive proof Harris James was involved in Lucy’s death, which means he was likely involved with cousin Dan’s disappearance and death, as well as Tom’s. The big problem for Wayne will be getting Roland to go along with his plan. 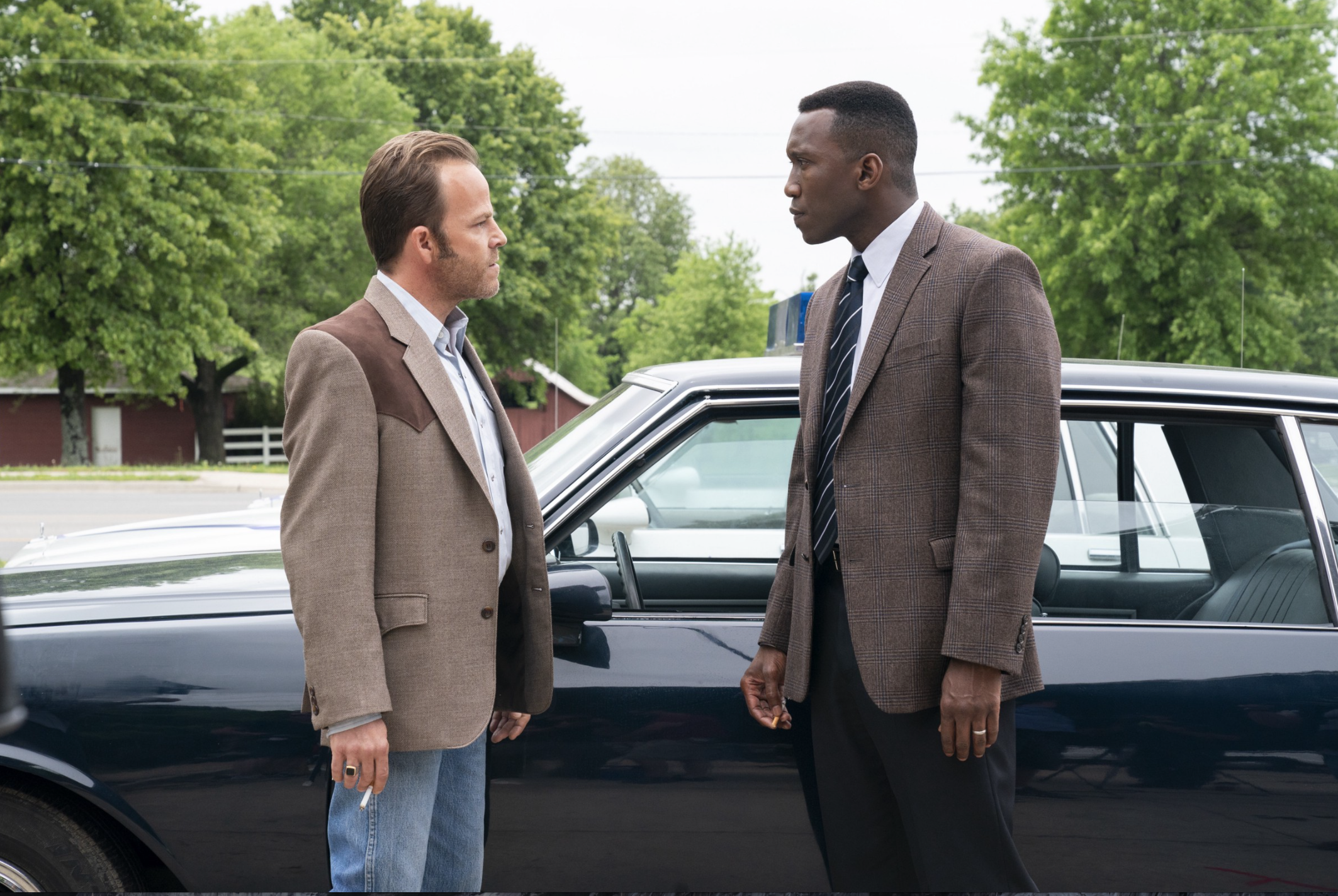 When Wayne reveals this evidence to Roland, Roland wants to give it to their superiors, but Wayne knows it will just get buried. He could probably take everything he has and give it to the FBI, but instead wants to capture Harris James, and take him out to the old barn where Wayne and Roland used to beat confessions out of people. Wayne guilts Roland into doing it for Tom. He knows he’s manipulating his partner, and this manipulation will be a bone of contention between the two for decades. Roland agrees and they scoop up James, but things go sideways fast. James feigns a willingness to cooperate and tell them the truth, but right as Wayne uncuffs James, he grapples with Wayne for control of his gun, and in the struggle Roland puts a few bullets into James, killing him. Now they may never find out the truth, and they must bury and cover-up the murder they committed.

There are several great character reveals in these episodes, with the first being Louis Gossett Jr. as the man with the fogged over eye who was seen talking to the Purcell kids before their disappearance. In the 2015 timeline, Wayne and Roland figure out that this man worked for the Hoyt’s and was possibly a child groomer and recruiter for pedophiles. Another big reveal is by Sarah Gadon’s interviewer. She connects the Purcell kids disappearance to the same pedophile ring Rust Cole and Marty Hart broke up in season one. This interconnectivity of these two seasons of True Detective is intriguing, and it’ll be interesting to see how this is handled in the season finale. The final reveal isn’t visual, but it’s the voice of Michael Rooker as Edward Hoyt. He shows up at Wayne’s house right as Wayne is about to tell Amelia everything for the first time, and calls telling Wayne to either come out to his car, or he’s going to come into Wayne’s house. 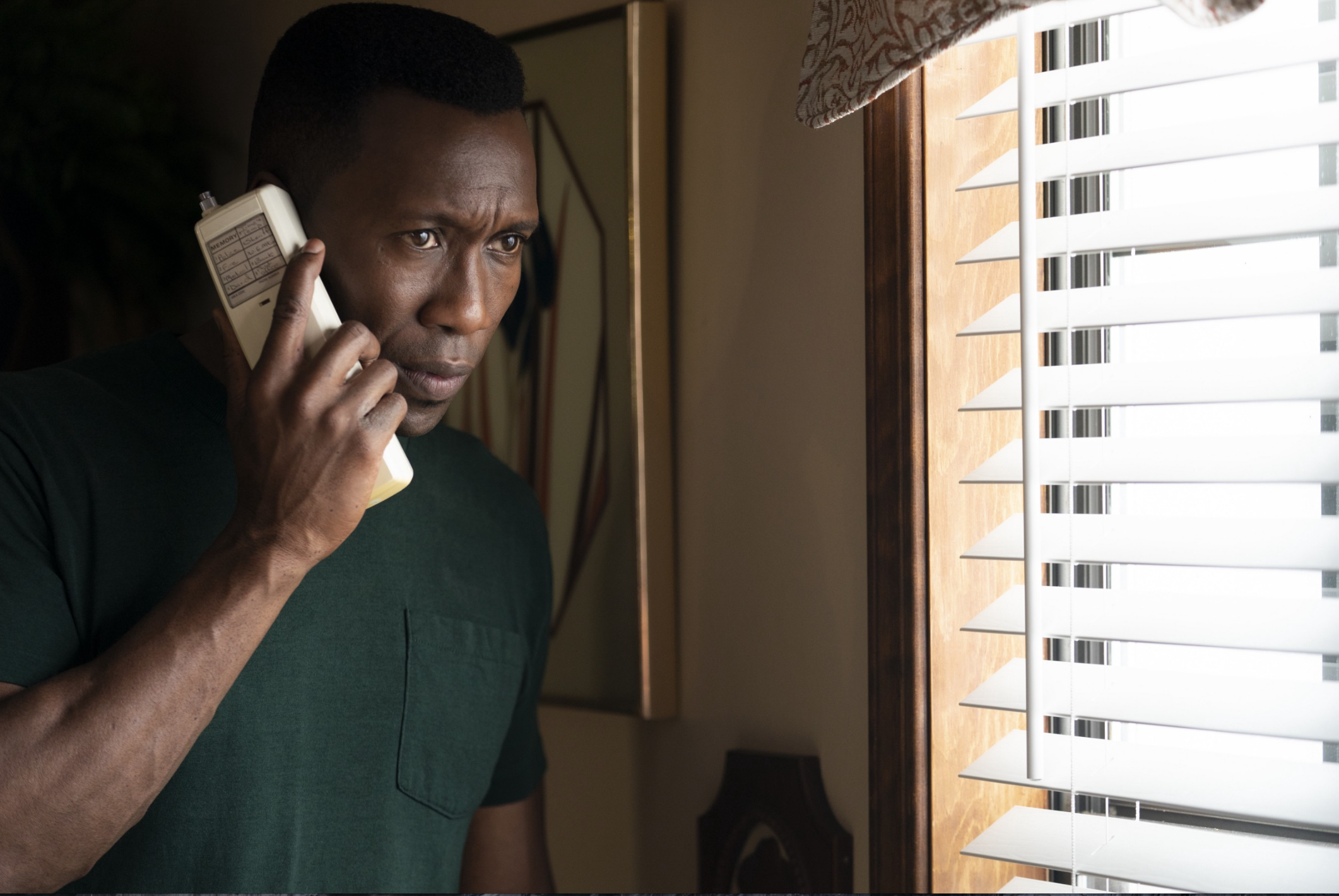 Hoyt’s call is menacing, and it’s unclear what he does to or threatens Wayne to back off. Hoyt is either a pedophile, or the pedophile ring is entirely misdirection. There’s a chance Edward Hoyt could be Julie’s real father, since we know Tom wasn’t her biological father. He could have met her at his family’s chicken plant when she worked there. Could Hoyt have paid off Lucy to let him have his child and make it look like an abduction? If so, this would be something he would have had to keep under wraps, hence the fortified pink room she was secretly kept in. If this is the case, how did she escape? Hoyt would have fed her stories about how he was her real father, and told bad things about Tom to win her trust, but at what point does she get away from Hoyt? Does Hoyt finance Kindt’s election to Attorney General in exchange for helping bury the evidence of what happened to Julie? How did Will die? There are so many questions left dangling, and this season has been so good, that it’s a little frightening that there’s only one episode left to wrap things up.