True Detective’s two-hour season three premiere is a tour-de-force showcase of Mahershala Ali’s incredible range, as well as this season’s preoccupation with time, memory, and the fluidity of both. True Detective appears to be a course correction in season three after its season two sophomore slump left the future of the series up in the air. 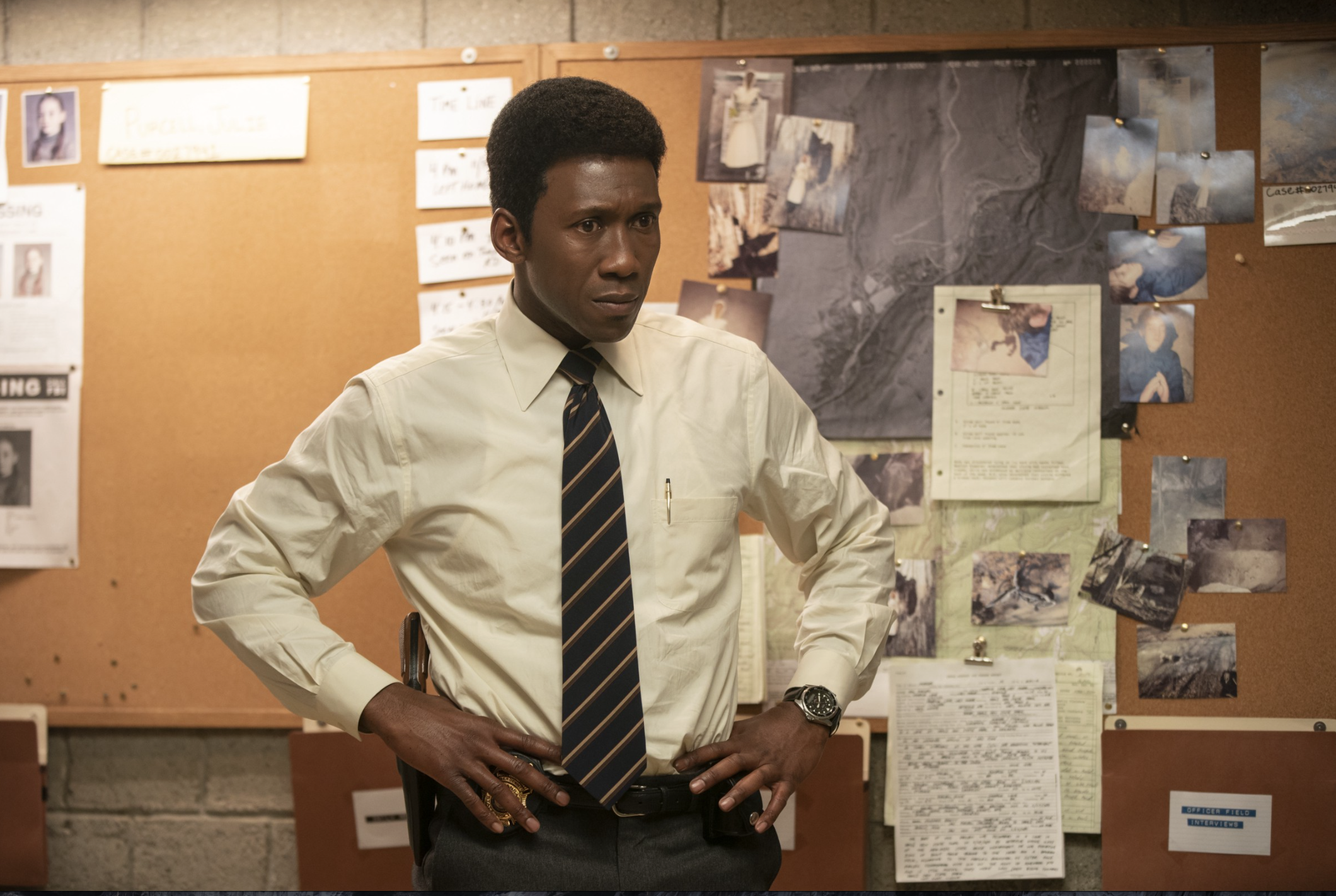 Ali plays Wayne Hays, a state police detective in northwest Arkansas who’s come back from the Vietnam War as a man who loves solitude. He’s taken a year to decompress from the horrors of war, and slipped into a job that suits his desire to be left alone, only to have the missing Purcell children’s case drop into his lap. The series takes place in three separate timelines, and we see Wayne as the Purcell case breaks in 1980 as a 35 year old man, again in 1990 when he’s 45 years old as evidence appears that Julie Purcell may still be alive, and in 2015 when he’s 70 years old being interviewed by True Criminal television show about his involvement in the case.

A large focus of the story is about the creeping nature of dementia and its affect on Wayne at 70 with gaps in his memory. Wayne is asked in both the 1990 timeline, as well as the 2015 one about how his memory is, which begs the question of whether or not he was having problems with memory that far back, and if its possible PTSD and dementia played any role in his handling of the case. We know at 70 he makes himself tapes to listen to each morning so he knows what day it is, and what he needs to remember (which reminds me a bit of Christopher Nolan’s treatise on memory, Memento), but he also makes his son take him around town to places important in the Purcell investigation in order to jog his brain and loosen lost memories of the case. 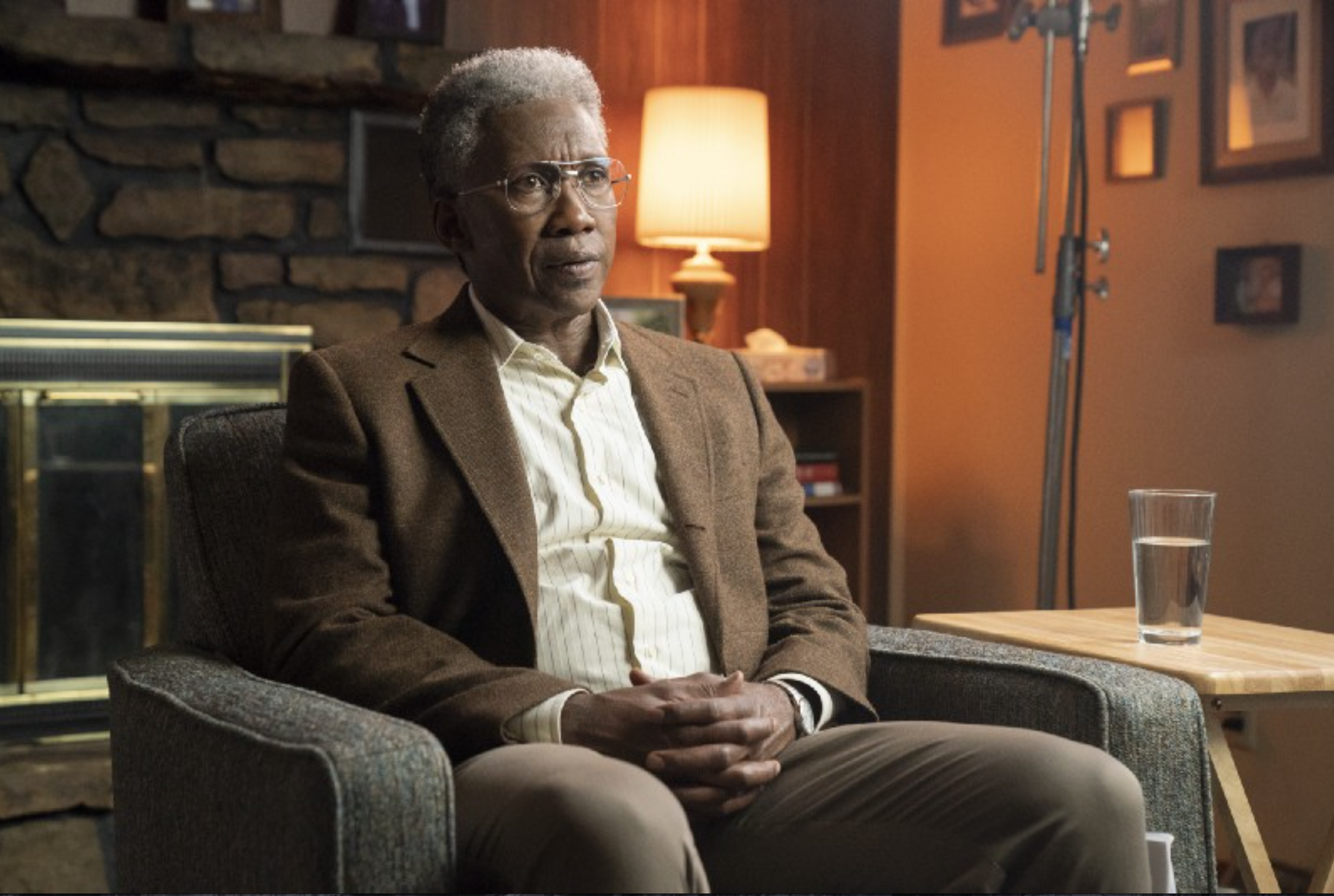 Ali has more range with his body language in his role as Wayne Hays, than most actors have using both physicality and words. Watching him play three different versions of a man, with three different grasps on reality (which sometimes bleed together, but we’ll talk about that in a moment) is an incredible treat. Wayne is a man that both doesn’t fit into the world he finds himself in as both a black detective in a rural southern state, and as an older man struggling over the control of his own memories. His partner Roland (Stephen Dorff) doesn’t believe the subtle biases of their bosses, but it’s a legitimate point Wayne brings up during the investigation. In the 1980 timeline we see Wayne more guarded and selective with his views about the case with his superiors, but by 1990 he doesn’t give a shit and speaks freely. The memory issue is incredibly important, because it is through our memories, and our vision of our past, that we paint the picture of what our life was, and who we were as a person. As bits and pieces of that narrative disappear, the edges of our mortality are erased leaving us feeling lost and rudderless, drifting on a sea of confusion and fear. Ali embodies this struggle wholly, and brings his character to life in a very enriching way.

The manner in which the timelines are handled is an intricate dance, with the time periods weaving in and out with the precision of a tapestry until sometimes they bleed into each other. These moments break the walls between timelines, at times feeling like a lucid dream, as one moment its 1980 and Wayne is working the Purcell case, and the next he’s being interviewed in 2015. A question intrudes on one timeline or memory and then pulls him out of the past and into the present where he finds himself confused momentarily before he collects himself and moves on. At first these are small instances, but when the second episode ends Wayne finds himself in 2015, standing on the corner of Shoepick Lane and Briarwood where the Purcell kids vanished from, in his robe looking utterly confused as to how he got there. It’s a moment that reminds me of sleepwalker (perhaps that’s what dementia is like) that’s been awoken. Wayne is frightened and confused, and it leaves both himself and the audience unsure how much worse these slips in time will become. 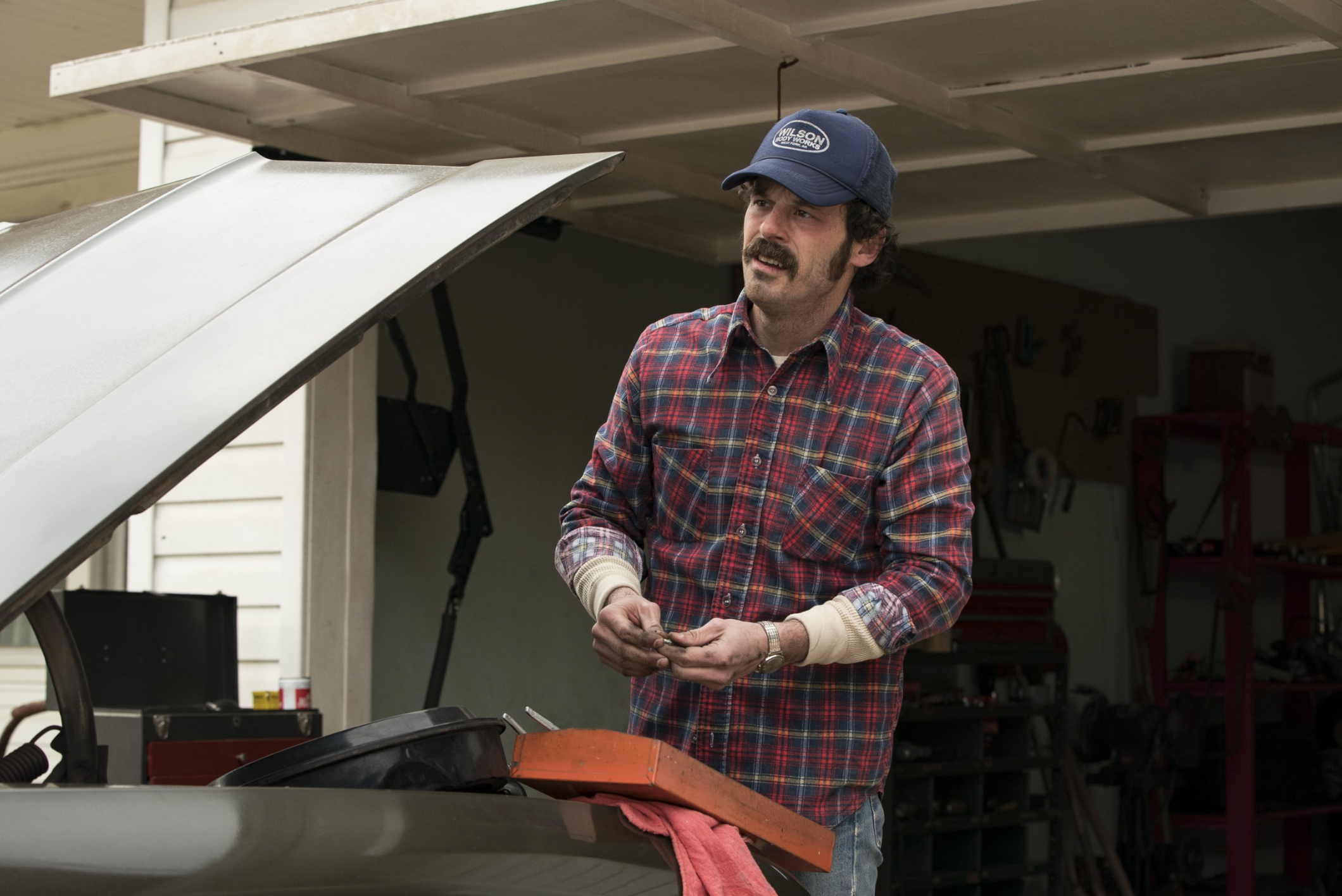 Another stand out performance in these first two episodes is Scoot McNairy’s portrayal of Tom Purcell, the bereaved father of the two missing children. McNairy is an actor who gives powerful performances in nearly everything he’s in (check out the last season of Halt and Catch Fire), and here his portrayal of Tom is so heartbreaking and sad that he steals nearly every scene he’s in. There are so many questions and possibilities about what happened to his children Will and Julie. Were they running away from the terrible circumstances of their parents constant fighting? Did his wife’s pedophile cousin Dan have anything to do with it? Or are the creepy straw dolls found near his son Will’s murder scene indicative of a satanic connection? The weight of not knowing if his daughter is alive or not hangs heavily on Tom’s shoulders, leading him to drink and despair. Does his life spiral out of control over the course of this 35-year period, or does he pick himself up and start over fresh. It’ll be interesting to see. 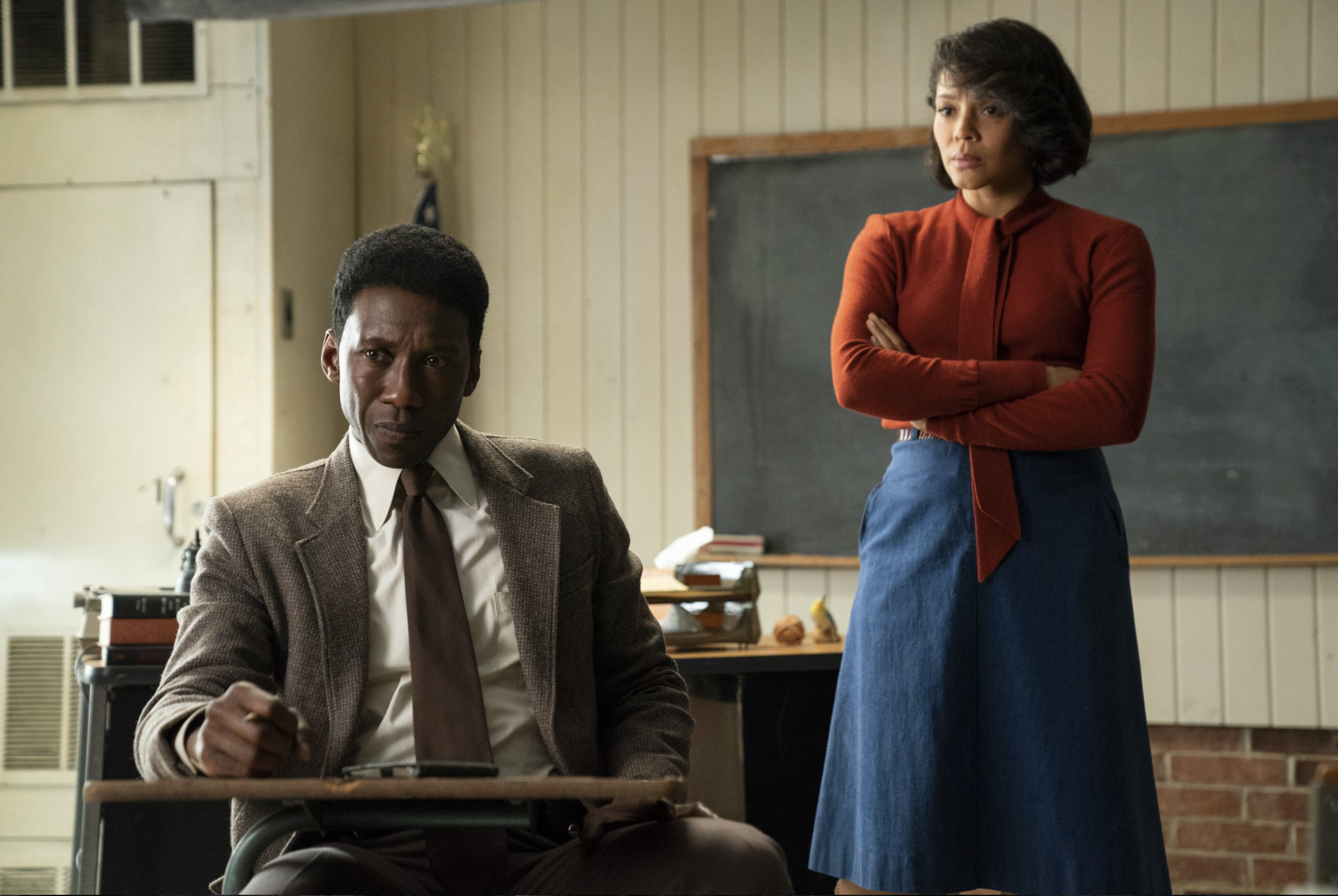 Much like how season one of True Detective used literary and philosophical allusions to enrich the story, there are several possible clues tucked into the first two episodes. Two Robert Penn Warren poems are recited by Amelia (who later becomes Wayne’s wife) when Wayne first meets her teaching Literature at the high school. The first is “Tell Me A Story” and the second is “IV. Love and Knowledge.” The latter is a poem written about how John James Audubon would kill the birds he was famous for painting, using their deaths as a way to expand his knowledge of the birds he so loved. The meaning of this poem specifically is pretty creepy, begging the question of whether or not Will Purcell was killed for a similar reason. In a Vanity Fair piece, it’s pointed out that a book seen momentarily in Will’s room as Wayne searches for clues entitled, “The Forests of Leng” that looks like a Dungeons and Dragons handbook, is a nod to H.P. Lovecraft’s Plateau of Leng which is a fictional realm he created where old monsters live. Is this a nod to season one, and how “The King in Yellow” played a prominent role in the narrative? Is it just a false lead meant to add atmosphere to the story? We won’t know until the end of the season, but it’s intriguing to think about.

There are many avenues the investigation could go, as well as several suspects who may have had a hand in the disappearance of the kids. One suspect in particular hits home to Wayne. Brett Woodard is a fellow Vietnam Vet who came home and found he couldn’t quite live in this world, but couldn’t leave it either. He’s lost his wife and kids, and now collects scrap metal out of people’s garbage in order to make a living. Woodard was one of the last people to see the kids, but his plight of being unable to shake his wartime experiences is almost too close for comfort for Wayne. There are questions Woodard struggles with that Wayne purposely doesn’t think about for fear of what it would do to his sanity. His solitary ways, lack of interest in marriage before he meets Amelia, and hunting hobby all play into a very regimented life he’s built for himself. His choice of profession is also a lonely one. According to Pizzolatto, “The existential isolation that’s endemic to the character of the detective in popular culture,” seems to mirror that of the 70 year old Wayne we see struggling with gaps in his memory about the Purcell case that’s the focus of the series. I would even argue that “the existential isolation” of the detective mirrors that of the Vietnam Vet struggling to find his place in society. Along with Wayne’s race playing a role in his feelings of being an outsider within his own police force, we find he’s not much different than Woodard. 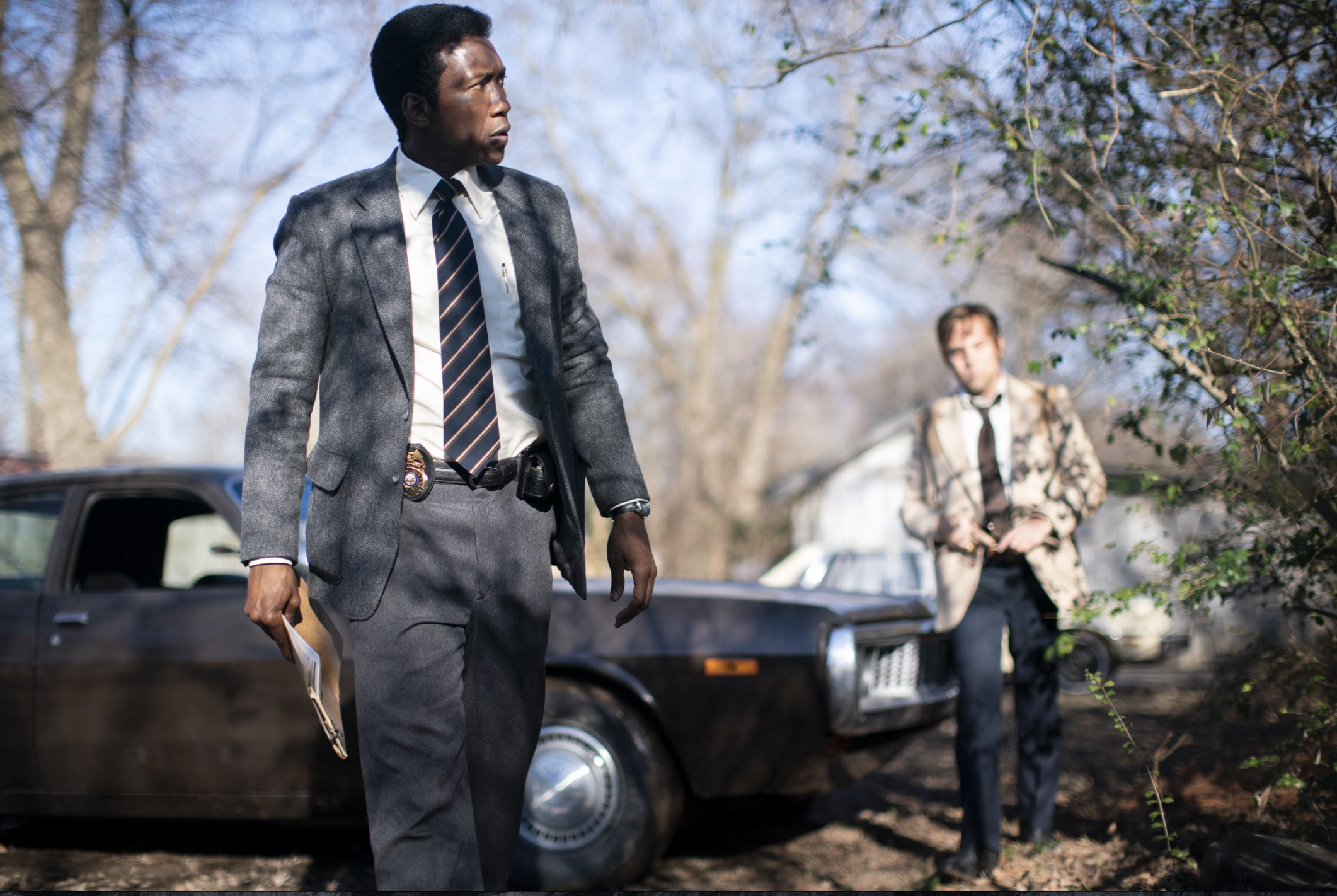 The look of this season harkens back to the Louisiana setting of season one, with the Arkansas Ozarks having the same golden, yet muted colors that were so gorgeously used to effect in the first series. There’s a wild aspect to the woods and swamps of Arkansas that gives a creepy decaying feeling to this world, sometimes suggesting the same paganistic bent the first season of True Detective did so well. The case takes place in November, just after Halloween, which is a time of harvest in rural areas like this, drawing a link to the children’s abduction (and Will’s death) as a form of harvesting. Let’s not even go into the fact that their disappearance takes place in The Devils Den State Park. There are shots of rolling hills, murky swamps, caves, and foggy plains that all add tone and emotion to the narrative as it unspools. Season three is a giant step in the right direction, and with an intriguing story, and outstanding performances, it’s exciting to see where the show will take us next.