Twenty-five years after going off of the air with a huge cliffhanger, TWIN PEAKS is back. The series broadens its mystery by introducing a slew of new characters before winding its way back to the town and the characters we’ve missed so much. Lynch and Frost have created a much darker series where patient viewing is rewarded.

I’m not going to lie, the new Twin Peaks is going to test even the most die hard fans patience in it’s first episode, but if you can stick out both hours you’ll be delighted. The first episode moves at a listless pace, and I’d be lying if I didn’t worry during its first thirty minutes that Twin Peaks had gone too broad by introducing so many new characters. We rarely glimpse any of the characters from the original series, instead Twin Peaks focuses on new mysteries that’ll somehow tie back into the story we’re familiar with. My wife, who’s a fan of the original series, actually told me if I hadn’t been reviewing Twin Peaks she’d have turned it off twenty minutes in. This would be a mistake though, since by the end of the second hour the new season really begins to soar.

Lynch is the master of the absurd, the long take, and sudden extreme violence. This version of Twin Peaks is missing the light comedy that made the darkness of the original series easier to watch. That balance between light and dark is what made the extreme nature of the crimes in the first run of Twin Peaks palatable for a 90’s audience, but now would probably seem silly to a modern audience where murder, incest, drug use, prostitution, and the surreal have become common place on television. This new series of Twin Peaks is more Fire, Walk With Me than the ABC television series of yore. If you think you can just jump into Twin Peaks without having seen any of the original, you are sorely mistaken. I’ve watched the series all the way through numerous times, and there were moments where I felt completely lost, so I can only imagine a newcomers take if this is their first Twin Peaks experience. 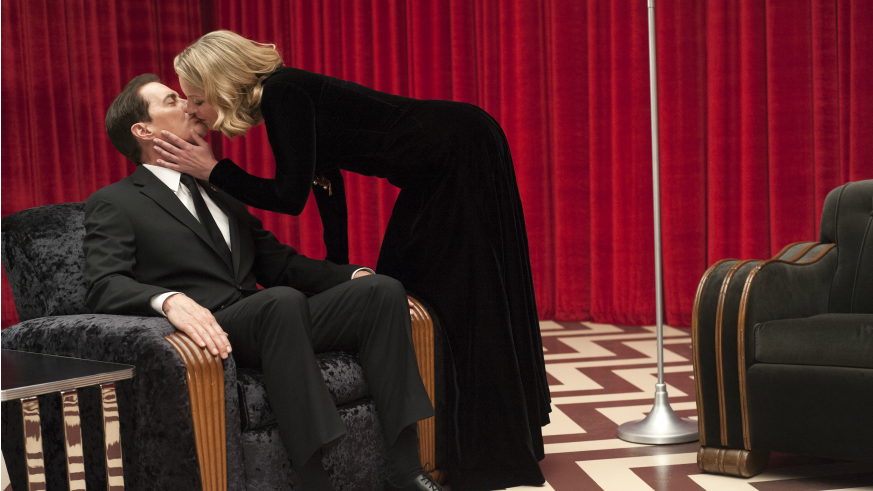 The revival begins where it promised to return to so long ago … Agent Cooper in the red room with Laura Palmer after twenty-five years. Twin Peaks updates it’s intro, which is a good idea since the old one felt incredibly dated. It’s shortened by the second episode, but if you’re prone to motion sickness you’ll want to look away from the television while the dizzying long version plays during the premiere. When Twin Peaks, the Red Room is in black and white, and the Giant has a new message for Cooper. “Remember 430, Richard and Linda, two birds with one stone.” Cooper says he understands and then disappears. It seems Cooper has been trapped in the Black Lodge the entire time while his doppelganger has run amok out in the real world.

Kyle MacLachlan does an amazing job playing both characters, but what’s especially impressive is his role as Mister C, the badass evil version of Cooper that’s taken his place. Mister C is a rougher, dirtier, more violent version of Cooper. It’s what Cooper would look like as an outlaw biker. What has he been up to all this time? He visits what appears to be a hillbilly brothel, only to take out their security guard, and grab two associates named Ray and Darya. Lynch’s awkwardness and absurdity in these types of situations is in full display with Mister C at the brothel. We won’t see Mister C, Ray, and Darya again until the next episode. Instead, Twin Peaks focuses on New York City and a small town in South Dakota.

Somewhere in New York City, there’s a mysterious glass box surrounded by cameras and lights, being watched by a college kid named Sam who’s being paid to sit in a concrete room waiting to see if anything appears inside the box. The man paying him is a mysterious billionaire. What’s the box for? If something does appear in the box, what is it going to be? Sam is the only person who’s supposed to set foot in the room, but a girl named Tracy visits him in hopes of spending some time alone with him. Since it’s forbidden, and a security guard sits outside of the locked room Sam watches the box inside, it doesn’t seem like it’s going to happen, but the next time she visits the guard has gone missing. Sam let’s her inside the room, where they begin making out. As their foreplay leads to sex, something appears inside the box, and frightens them both. This thing, because it’s hard to tell what it is, breaks through the glass box and attacks them both, seemingly killing them. What the hell was that?

The remainder of the episode focuses on the murder of Ruth Davenport in the small South Dakota town of Buckhorn. Ruth’s head has been severed from her body and left in her bed, but the body under the covers is not her own. Suspicion falls on a local school principal named Bill Hastings, who has no idea why he’s being arrested for the murder. Is Bob back, and possessing Bill to do his killing for him? It’s not clear. The interesting part of Bill’s arrest is his wife is concerned they’re having people over later that night and the arrest of her husband is inconvenient. How does this tie into Twin Peaks? None of these new characters or locales will begin to make any sense until the second episode.

Lynch and Frost don’t do themselves any favors for a new audience during the first hour, and in fact almost seem to be going out of their way to alienate viewers by focusing on new characters and locales. In the entire first hour we only see brief snippets of Dr. Jacoby, the Horne brothers, the Log Lady, Hawk, and Lucy. The only scene of importance for these characters is a telephone conversation between the Log Lady and Hawk. Her log has a message for him, “Something is missing, and you have to find it. It has to do with Dale Cooper. The way you’ll find it has something to do with your heritage.” Will Hawk be able to find the real Dale Cooper?

The second hour of Twin Peaks finds its rhythm, and this is where the show really begins to shine. The new characters and locations tie back into the main story and begin to make sense, and we spend more time with the real Agent Cooper in the Black Lodge. Laura Palmer appears and tells Cooper “You can go now” and then removes her face revealing a dazzling light, before putting it back on. Suddenly the curtains shake, Laura screams, and is pulled out of the Black Lodge violently. One-armed Mike is going to lead Cooper out of the Black Lodge. The strangest part of the entire series so far is a tree with lightning flashing through it, with a ball of talking, sentient bubble gum on top. Mike refers to it as “the evolution of the arm” and the tree tells Cooper, “Do you remember your doppelganger? He must come back in before you can go out.” This may be the crux of the entire season. In order for Cooper to be freed, Mister C needs to be sucked back into the Black Lodge, but he has other ideas, and is in no hurry to leave the real world. 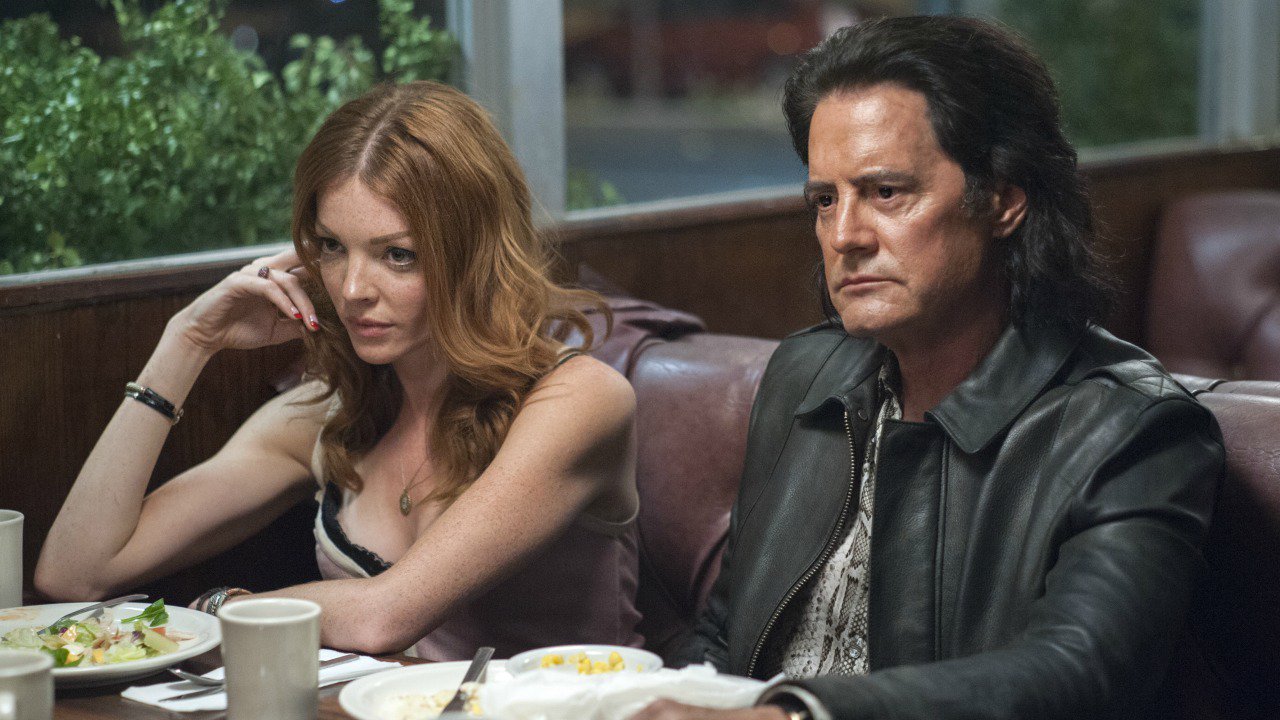 The murder of Ruth Davenport is connected to Mister C. Evidently Mr. Hastings has some coordinates that are of the upmost importance to Mister C and his ability to defy the Black Lodge and keep from going back. It seems Bill was having an affair with Ruth Davenport and his wife knew about it, so Mister C got her to frame her husband for the murder. Mr. Hastings secretary has the coordinates, but for some reason will only give them to Mister C’s associate Ray. Mister C isn’t someone who leaves loose ends, so he kills Mrs. Hastings and makes it look like her own lover did it, then kills Darya once he figures out she and Ray were paid to kill him. He doesn’t know who hired the hit on him, and he also doesn’t have the coordinates he needs. Will the coordinates lead him to the Black Lodge or to the mysterious glass box?

While the real Cooper is stuck in the Black Lodge, Hawk has hiked to the place in the woods where the entrance to the Black Lodge first appeared to Cooper. Is Hawk waiting there to help rescue Cooper, or is there a clue there to help him unlock the mystery of where Cooper has been for the past twenty-five years? Apparently the doppelganger disappeared right before Lucy and Andy’s child was born and hasn’t been seen or heard from since. Can Hawk, Lucy, and Andy find anything in Agent Cooper’s old case files that’ll point them in the right direction of solving this mystery? 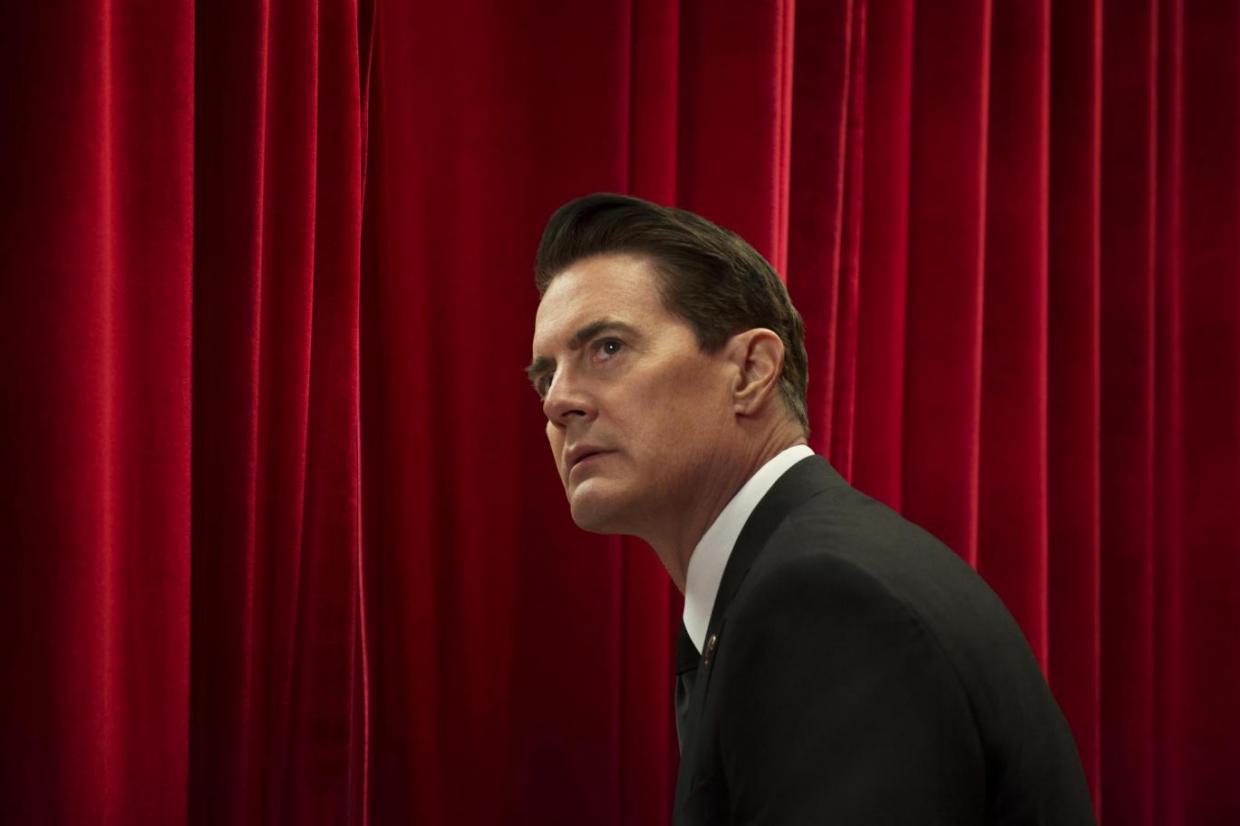 The way out of the Black Lodge is blocked for Agent Cooper, and Mike announces to the sentient tree that something is wrong. The tree tells Mike its own doppelganger is to blame. Cooper parts a curtain and sees a road in South Dakota and the car Mister C drives in. When he turns back, a doppelganger of the tree yells “non-existent” and shakes things violently until the floor opens up and Cooper is sucked into the glass box in New York City right as Sam has left to find Tracy there and the guard missing. Cooper floats in the air inside the box, but is sucked out into dark star filled blackness somewhere in another dimension. Is Cooper trapped outside of the Black Lodge?

The final scenes of the second episode bring us back to Twin Peaks and the characters we knew from before. At the Bang, Bang Bar a band is on stage, The Chromatics, playing a very Julee Cruise style song as James Hurley arrives to grab a beer and makes eye contact with Shelly Johnson. Is there something between these two? Balthazar Getty is at the bar and also makes eye contact with Shelly and points at her in a creepy way. Who is he, and how does he play into the World of Twin Peaks? The episode ends with The Chromatics playing “Shadow” on stage, which is a nice call back to Julee Cruise from the original series.