The finale of TWIN PEAKS ends much like the original series did, leaving the ending open to both interpretation and revisiting. Many questions are left unanswered, and new mysteries are presented as Cooper alters the Twin Peaks timeline and enters into another.

Anyone hoping for the finale of Twin Peaks to wrap up neatly with a nice bow on top of it has clearly never watched a Lynch film before. This isn’t a man that likes to explain his films; in fact he loves to keep clear cut answers at bay, preferring interpretation be left up to the viewers imaginations. We all went into this knowing how the original run of Twin Peaks ended, so why is a shock to some the new series finishes with an open ending? To me, Part 17 felt like the end of this season, with Part 18 the beginning of a new mystery altogether. Will we get another season of Twin Peaks or perhaps even a movie? It’s tough to say. I certainly hope so, because neither Lynch nor Frost has another 25 years in them to wait to come back to it again.

Gordon begins Part 17 by telling Albert and Tammy he’s been keeping something from Albert for 25 years. He, Cooper, and Major Briggs devised a plan to lead them to Judy (Jiao Dai, an extreme negative force Major Briggs discovered), but then Briggs and Cooper disappeared. The last thing Cooper told him was, “If I disappear like the others, do everything you can to find me. I’m trying to kill two birds with one stone.” One of the first things the Fireman tells Cooper at the beginning of the season is “Remember 430, Richard and Linda, two birds with one stone.” This information dump by Gordon comes into play by the end of the episode, with consequences in Part 18 as well. 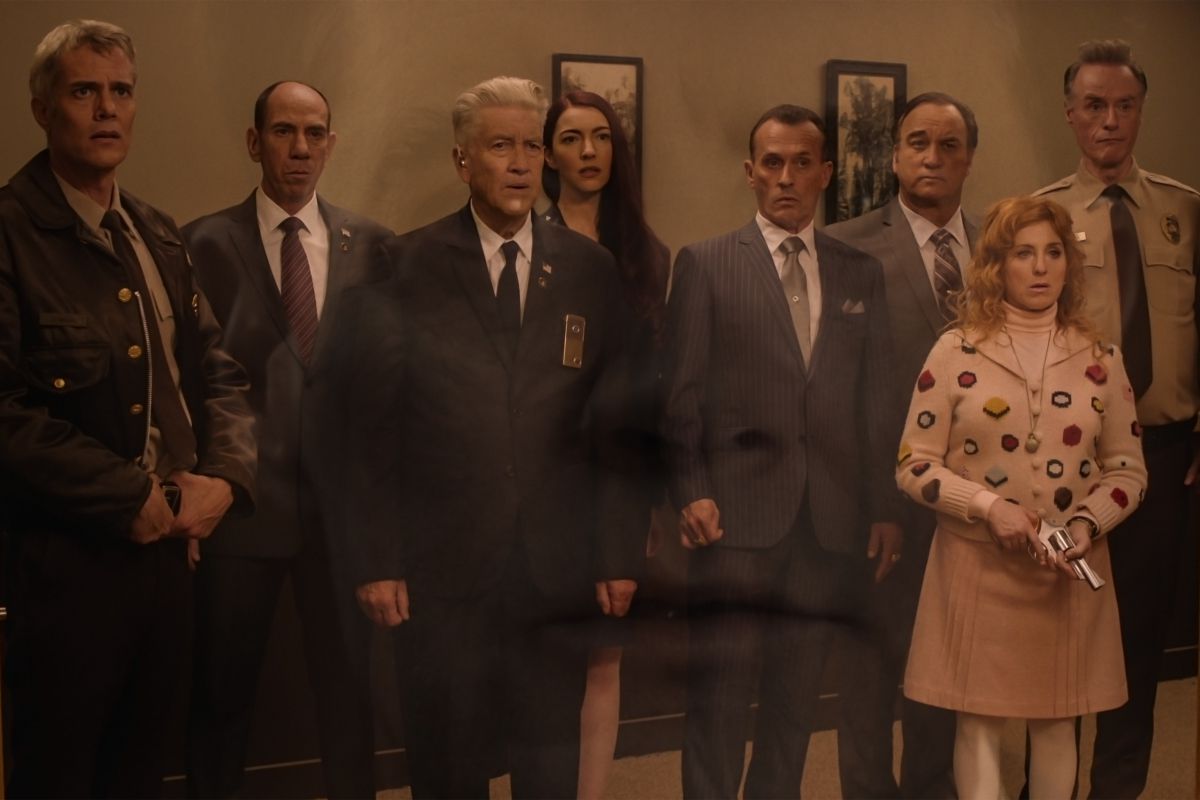 Part 17 is what the entire season has been gearing up for, a final confrontation between Cooper and his doppelgänger. All of the tension comes to a head when Cooper finally arrives at the Twin Peaks Sheriff’s Office and finds Evil Cooper has been shot to death by Lucy. Andy brought Freddie, James, and Naido up to the conference room where the same supernatural woodsman who resurrected Evil Cooper last time he died is attending to his body. Instead of coming back to life, a black orb bursts out of Evil Cooper’s chest with the essence of BOB inside of it. BOB attacks both Cooper and Freddie, but Freddie’s destiny is for his powerful gloved hand to bash the orb until it breaks into pieces, disappearing. I don’t think BOB is dead, I just think he’s been banished from this dimension. Cooper then slips the ring on Evil Cooper’s finger, sending him back to the Black Lodge.

Naido and Cooper touch hands, and it turns out Naido is the real Diane. A fire envelops her face, and then Diane emerges from it showing her true self. Major Briggs knew all of this would happen, and shared it with Cooper who was acting according to plan. The key to room 315 from the Great Northern Hotel, Cooper’s old room, is given back to him by Sheriff Truman. This key is important, and has been so all along, because it will lead Cooper back to the Red Room. He says his goodbyes to Diane and Gordon, enters the Red Room and is led by MIKE through the same route we saw Evil Cooper take to speak to Philip Jeffries. Jeffries sends Cooper back in time, to February 23, 1989 to save Laura Palmer. 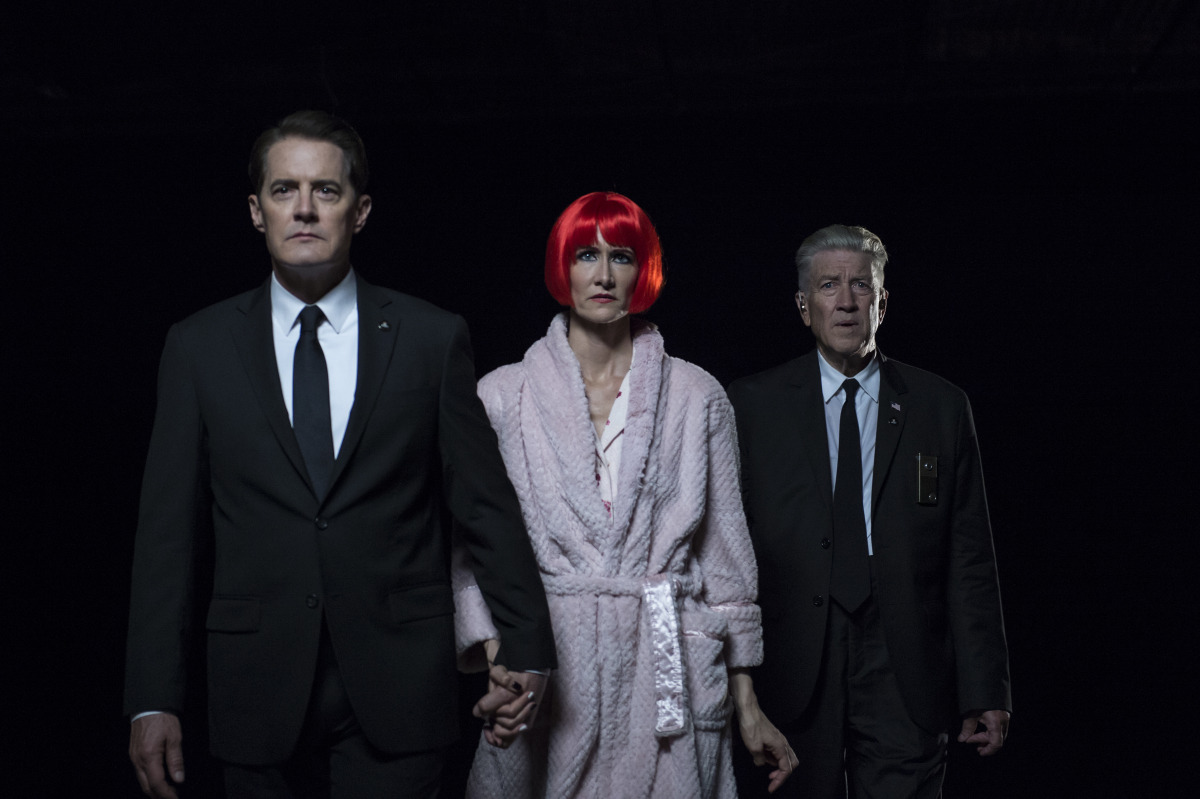 Lynch has used clips and scenes from Fire, Walk With Me several times during the season, but now Cooper is inside of these scenes, interacting with the characters. After Laura jumps off of James’s motorcycle and runs into the woods, she finds Cooper waiting for her. She remembers him from her dreams, and he offers to take her home. They walk hand in hand through the woods to the vortex by Jack Rabbits Palace Major Brigg’s sent Bobby to, but once they reach it Laura screams and disappears.

Cooper has changed the timeline of Twin Peaks. Leland is now unable to kill Laura since she’s left this dimension, and we see Pete Martell leave to go fishing just like he did in the original pilot of Twin Peaks, only this time the body of Laura Palmer is not on the shore. Will the altering of time have consequences beyond just Twin Peaks? Can removing Laura so she isn’t murdered really stop BOB? Back in the present, the being that’s possessed Sarah Palmer is furious, and stabs the iconic picture of Laura Palmer as the homecoming queen over and over. The episode ends with the last concert we’ll see at the Bang, Bang Bar. Julee Cruise sings “The World Spins.”

Part 17 felt like the end of the season, and could have been a superb end to the series. Even if this were the case, there’d be a lot of open questions still waiting for answers. Will we ever find out what happened to Audrey, and where she is? How about Shelly and Red? How is Becky doing? Why does Andy wear a Rolex watch, and get scoffed at by Chad for being a “good cop?” What type of entity has taken up residence inside of Sarah Palmer, and what’s its purpose there? I can live with these questions being unanswered, and in my mind this is the end of the season.

Part 18 begins with MIKE creating a new Dougie, who we see reunite with Janey-E and Sonny Jim. Cooper is back in the Red Room, where Leland asks him to “Find Laura.” Cooper leaves the Red Room and emerges in Glastonbury Grove where Diane waits for him. The love between these two is genuine and pure. Cooper and Diane seem to have had everything planned out for a really long time, playing a long game to right the wrongs that BOB created when he began his killing spree. Together they drive exactly 430 miles out into the middle of nowhere and stop, which matches the 430 the Fireman told Cooper about. There are huge electrical towers all over the landscape, and the crackling of electricity from the wires. Diane asks Cooper “Are you sure you want to do this? Once we cross over it could all be different.” Cooper is sure though, and they drive through a vortex into either another dimension or another time period, because it’s suddenly night. 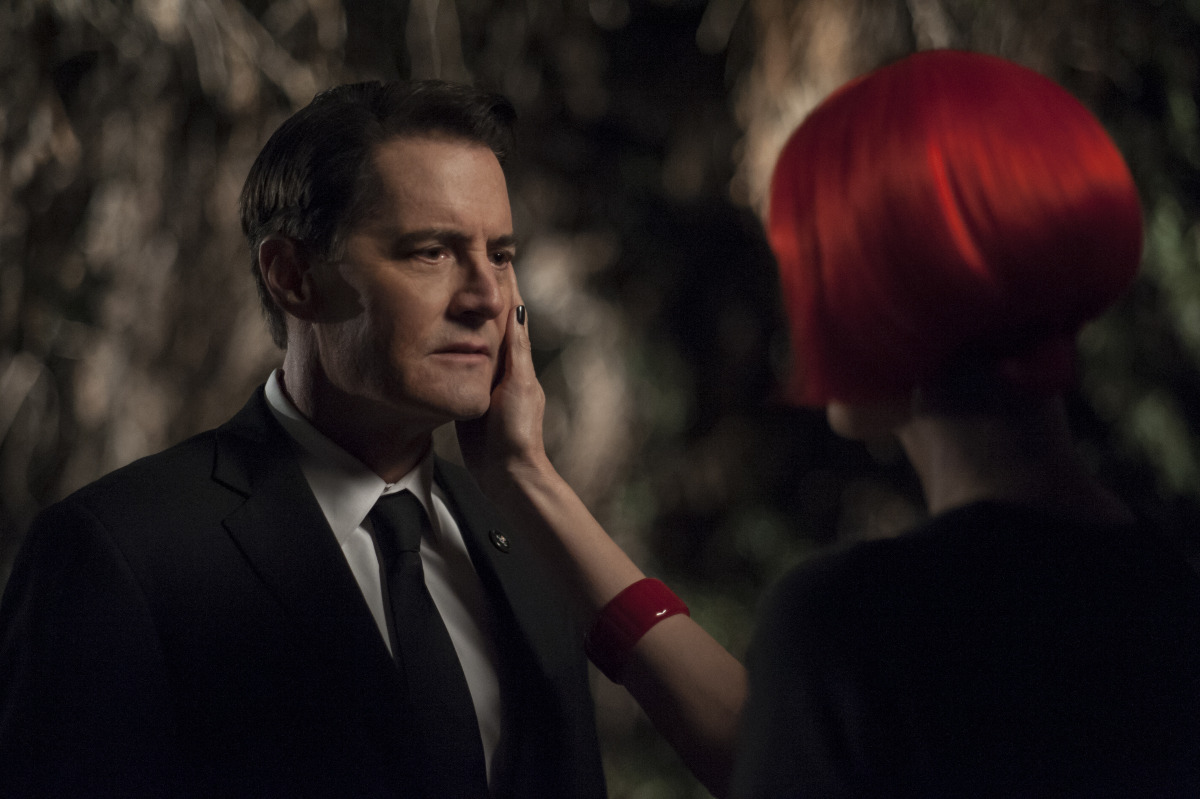 Things do change, and it seems like Cooper is no longer his chipper self, in fact it appears he’s somewhere between Cooper and Evil Cooper’s personality. When he and Diane stop at a motel for the night, Diane sees a doppelgänger of herself come out from behind a bush. For some reason, it doesn’t faze her. In the motel room Diane and Cooper have sex. It’s awkward, strained, and goes on far too long. Cooper seems to be taking no pleasure in it, and Diane covers Coopers eyes, unable to look at him, and unwilling to be seen by him. Is she remembering Evil Cooper raping her? Something happens during sex that changes everything. Diane is gone when Cooper wakes up, but she’s left a note addressed to Richard about their love being over, and has signed it Linda. This is the Richard and Linda the Fireman mentioned to Cooper.

If Cooper and Diane are really Richard and Linda, what does it mean? When they entered the vortex did they become different people? Which existence is real and which is a dream? Something shifts dramatically, because when Cooper leaves the motel it’s a completely different motel than the one he and Diane stopped at, and he’s also driving an entirely different car. Did their sex act as a sort of vortex that sent Cooper somewhere else? He’s now in Odessa, Texas, and drives around until he spots Judy’s Café. Not the Judy I was expecting, but that’s okay. He goes inside, manhandles some rednecks, deep fries their guns, and makes the waitress give him the address of the other waitress who’s off for the day.

Cooper isn’t acting like himself, and his display in the café is more reminiscent of Evil Cooper than of Dale Cooper. When Cooper knocks on the door at the address, a woman named Carrie Page answers the door, and she looks exactly like Laura Palmer. She has no memory of Twin Peaks, her life there, or her parents, but she agrees to be taken there by Cooper since she’s in some sort of trouble in Odessa. There’s a body of a dead man in a chair inside her home, but Cooper doesn’t even ask about it. He’s fixated on the white horse figurine on the mantel of her fireplace, which is a symbol from the original series. Carrie leaves with Cooper for what seems like an endless amount of driving. 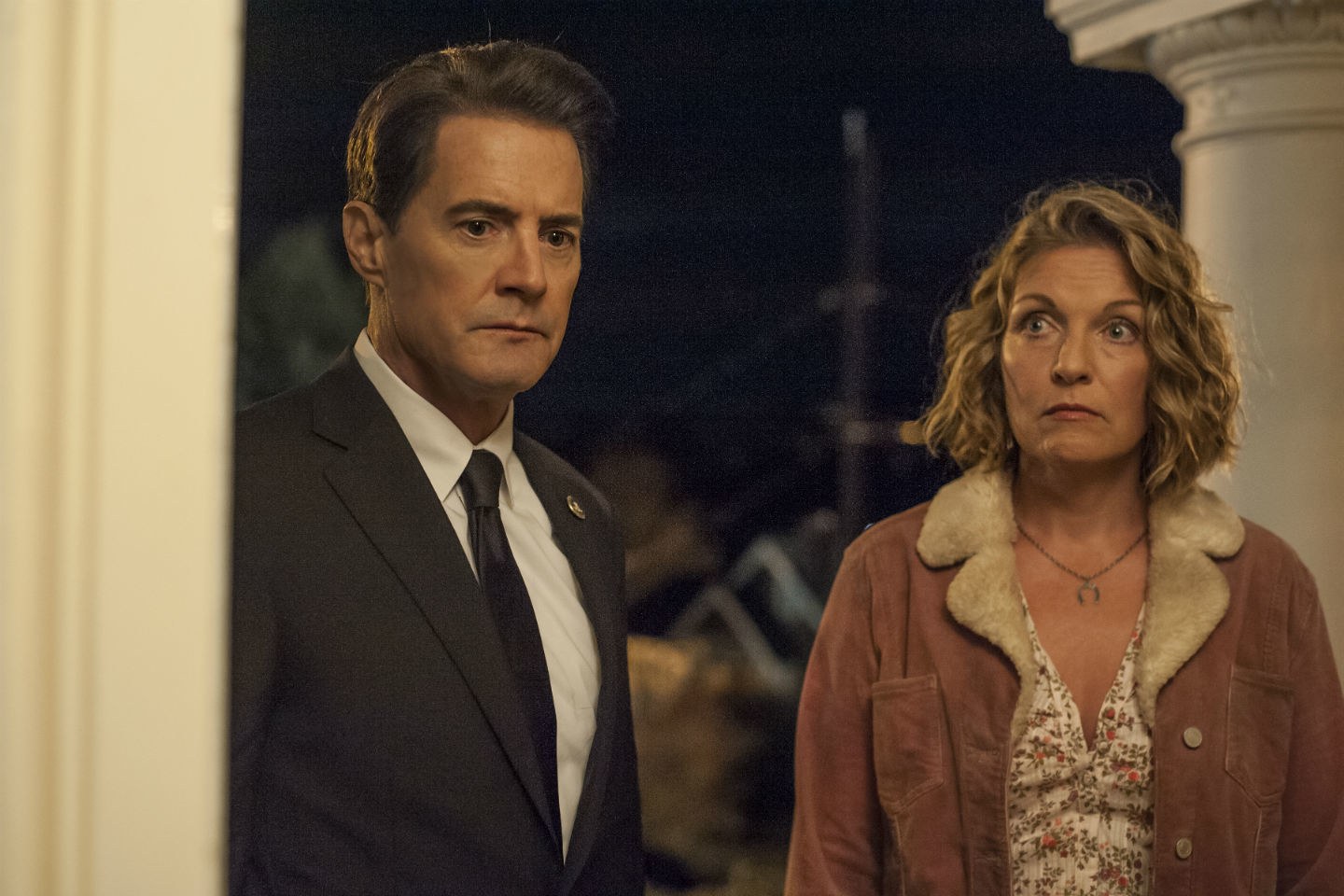 Once they arrive in Twin Peaks, Cooper takes Carrie to the house Laura grew up in. When he knocks on the door, a blonde woman answers who has no idea who Sarah Palmer is. She tells Cooper her name is Alice Tremond, and she bought the house from a Mrs. Chalfont. Both of these names are used by the supernatural grandmother character in the original series and in Fire, Walk With Me. This doesn’t feel right? Is this a dream? It seems the entire trip we spent an hour watching was in vain. Cooper and Carrie stand in the street looking at the house. Cooper’s confused and asks, “What year is this?” Sarah Palmer’s voice can be heard calling Laura’s name, and something clicks inside of Carrie. She remembers, and screams that terrifying Laura Palmer scream. The lights snap out in the house, there’s an electrical flash, and then everything goes black.

Something supernatural is afoot, and Laura now remembers who she is. This mystery is intriguing, and could be the start of an entirely new season if Lynch and Frost want to explore this further, which I hope for God’s sake they do. I keep going back to what Monica Bellucci told Gordon Cole in his dream, “We are like the dreamer who dreams, and then lives inside the dream. But who is the dreamer?” Is this all someone’s dream, and if so who is the dreamer? Twin Peaks definitely resides inside of a multiverse, with interdimensional beings playing roles in guiding or interacting with the world, but for what purpose? This can’t be the end, it feels too much like a beginning. I want more! I need more Twin Peaks!

Despite its slow paced final hour, Twin Peaks delivers one hell of a season, and in the process has produced some of the most interesting, perplexing, and challenging television ever created. Bravo to Showtime for allowing Lynch and Frost the creative freedom to produce this masterpiece.