TWIN PEAKS returns with a confoundingly beautiful episode that features one of the most experimental sequences ever witnessed on television, very little dialogue, a performance by Nine Inch Nails, and perhaps the birth of true evil into the world. It’s an episode open to interpretation, but it’s also a feast of nightmare images to haunt us until next week.

If you thought you’d seen Lynch at his weirdest during Part Three brace yourselves, because Part Eight crushes heads both literally and figuratively. Hats off to Showtime for allowing Lynch and Frost to go into completely uncharted territory. This iteration of Twin Peaks is unlike anything I’ve ever seen on television. It’s bold and experimental, much like the original series was at the time, and is a unique form of storytelling that takes its time and is unafraid of stillness and detours. I can’t imagine any network ever green lighting something so different than everything else on television and allowing the creators to have carte blanche at the same time. If you aren’t enjoying the series, or at least transfixed by the experimentation within a scripted series, you’re missing the groundbreaking nature of what Lynch has accomplished with his return to Twin Peaks. 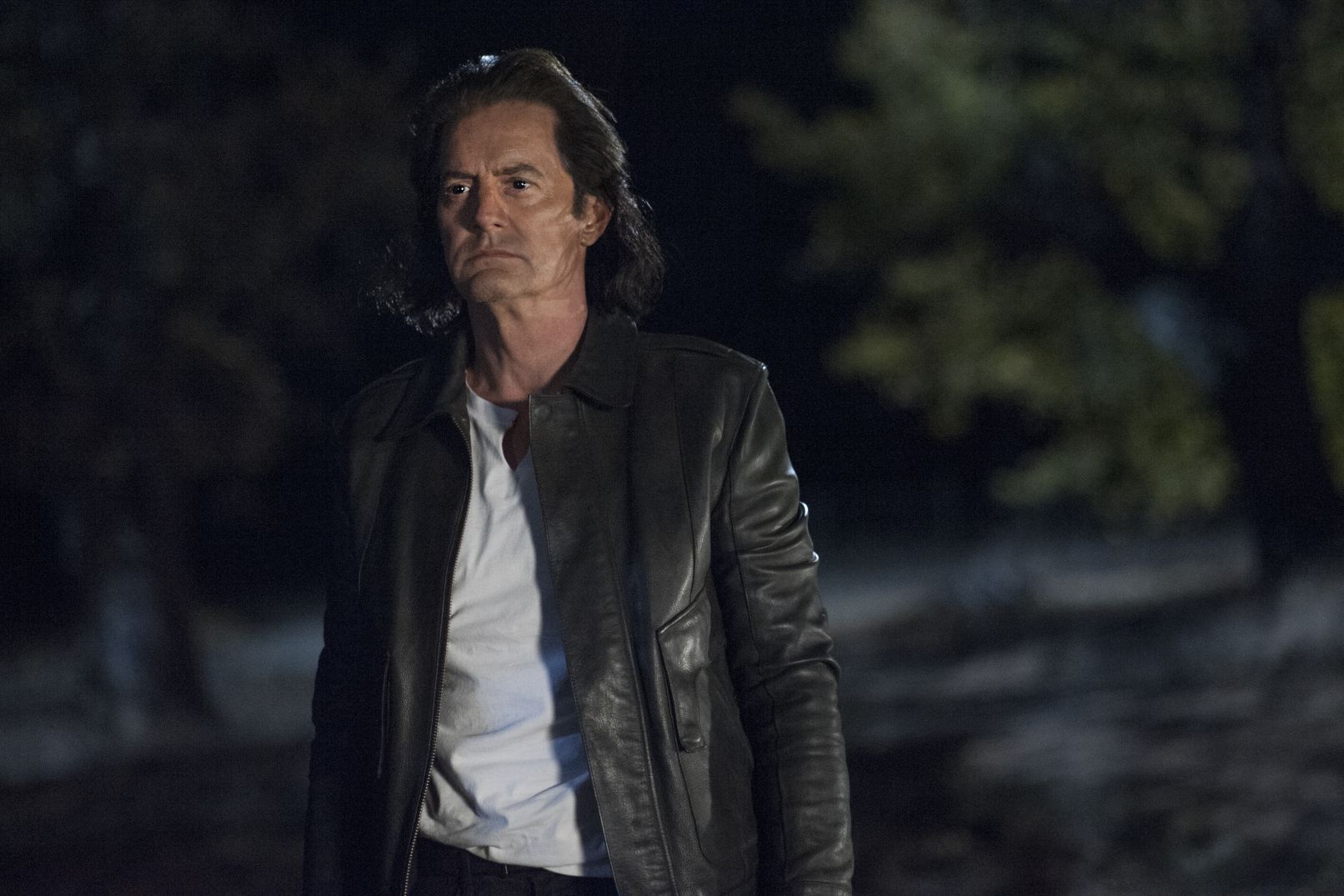 Last episode felt like the story, for all its slow building tension, was about to take off, but Lynch pulls the rug out from under our feet by offering us a glimpse of what happened to Evil Cooper after he escaped from prison with Ray, then radically changing course for the rest of the episode. Ray has something Evil Cooper wants, a code or numbers that are important to him staying in this world and not going back to the Black Lodge. It’s the only reason Evil Cooper took Ray along with him, and it’s clear once he has the numbers Ray will no longer be of any use to him. They drive out to the middle of nowhere as shots reminiscent of Lost Highway of roads only illuminated by headlights fills the screen. Ray stops the car to get out and urinate, and Evil Cooper takes a gun from the glove compartment and demands the information Ray has. Ray has a gun too, and when Evil Cooper’s turns out to be empty, Ray puts three shots into Evil Cooper’s stomach.

Immediately when Evil Cooper goes down, ghosts of logging hobos that look exactly like the creature in the cell next to Bill Hastings in Buckhorn, South Dakota appear and begin feasting on the blood and innards of Evil Cooper, dancing around him like the witches in Macbeth. It scares the hell out of Ray. We’ve seen another one of these strange men walking the halls of the police station when Lt. Knox shows up to find out more about Major Briggs’ fingerprints. Who are they, where did they come from, and what do they want? They smear Evil Cooper’s blood all over his own face, and in the shining bloody mess, Ray sees the face of Bob reflected in it and gets the hell out of there. Ray calls Philip and leaves a message about Evil Cooper. It seems Ray is working undercover for Philip Jeffries (David Bowie) in order to get to the bottom of what’s wrong with Cooper. This scene is followed by Nine Inch Nails playing their song “She’s Gone Away” at the Roadhouse, and as the song finishes, Evil Cooper sits up, revived from the dead. 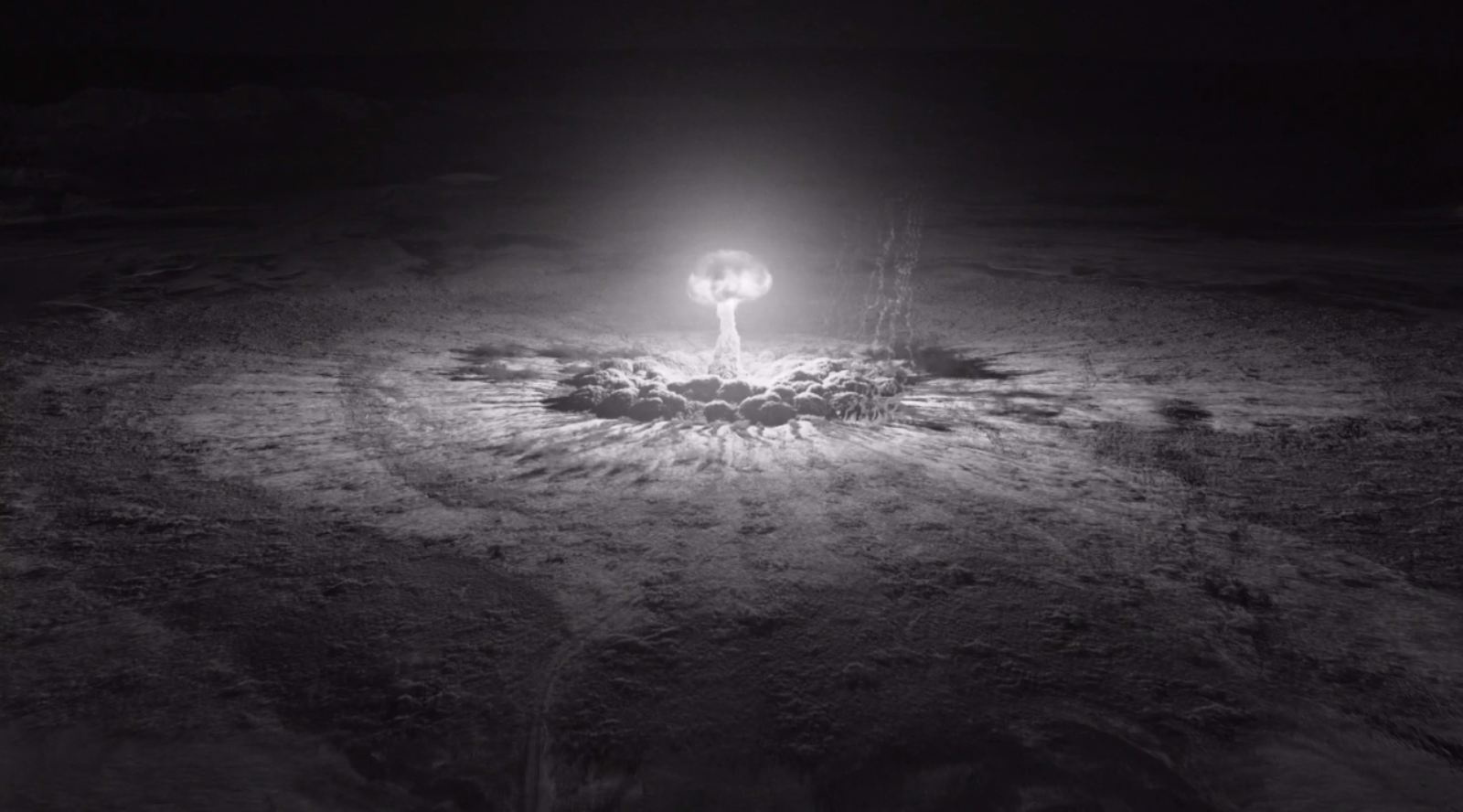 You know it’s an interesting episode of Twin Peaks when the appearance of Nine Inch Nails is the least interesting thing about it. For the next 32 minutes there is no dialogue whatsoever. We’re given something unique, a feast for the eyes and the mind as a title card reads: JULY 16, 1945 WHITE SANDS, NEW MEXICO. This is the Trinity atomic bomb test, the world’s first atomic bomb, and we see the explosion and mushroom cloud in beautiful slow motion as “Threnody For the Victims of Hiroshima” plays. As the music gels with the picture of the mushroom cloud we get closer and closer until we enter into the cloud. It feels like we’re watching something out of Kubrick’s 2001: A Space Odyssey. The way the music and the images work together would fit right into Kubrick’s film, and then once we go inside of the mushroom cloud things change from black and white into dazzling explosions of color. The images look like bursts of fire and electricity, swarms of bugs, bubbles dancing in water, and scratched and mutilated film as if it were a sequence put together by Stan Brakhadge for one of his experimental films. We’ve seen this mushroom cloud before on the wall of Gordon Cole’s office, so it’s clearly a significant part of the mystery of Twin Peaks. It’s perhaps the first time man has perverted nature, and the consequences are serious. 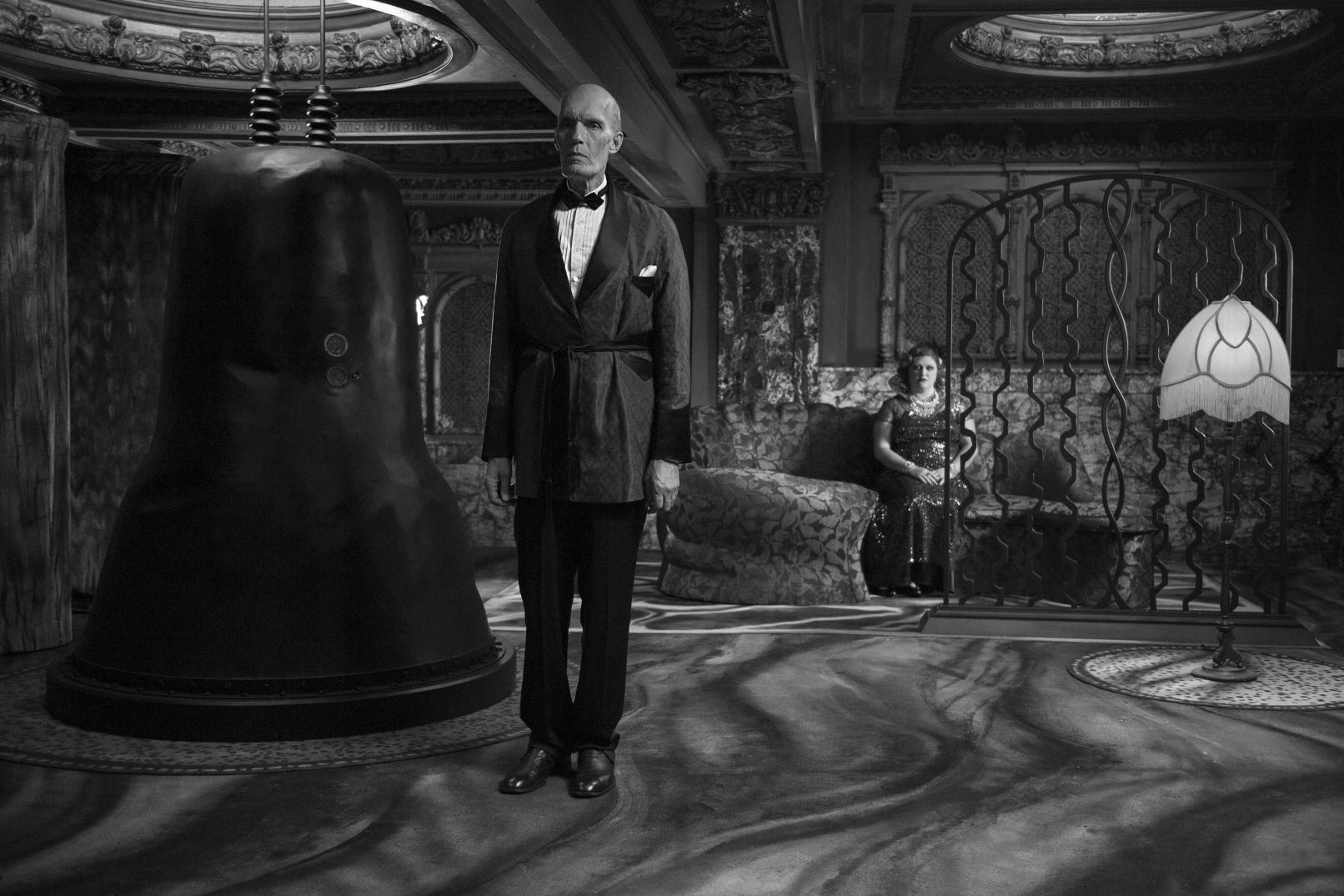 Once the camera pushes through the mushroom cloud, we see the purple ocean Cooper saw in Part Three. There’s a rocky outcrop in the middle of this ocean with a building on top of it. Inside the building is an old timey room, with a Victrola record player playing music, a bell shaped contraption we saw on top of the building in Part Three, and a woman credited as Senorita Dido listening to music when the bell’s alarm goes off. The Giant appears in a tuxedo, and turns off the alarm. He walks into a screening room and views the atomic bomb blast, just like we did, followed by shots of a convenience store (the one Bob and Mike lived above?) and more of the creatures we saw earlier with Evil Cooper walking around outside of it. The next image we and the Giant see is a figure floating in blackness who spews forth a stream of water, eggs, and Bob’s face. Are we witnessing the birth of Bob and the evil that is the Black Lodge? In response, the Giant floats into the air and issues a golden stream from his mouth that turns into a bowling ball size glittering orb with Laura Palmer’s face in it. The orb floats into a machine above the room, and drops the glowing orb onto the earth. Has the Giant created the White Lodge to counteract Bob? If man split the atom for evil purposes, could it be that the Black Lodge and the White Lodge are the consequences of perverting nature?

Another title card appears, and reads: 1956 AUGUST 5, NEW MEXICO DESERT. A man floats down from the sky, landing in the desert as a young boy and girl walk home together. The girl finds a penny, and the boy tells her he hopes it brings her good luck. Coins seem to be strange omens in Twin Peaks, and the girls luck does not go well. The same men who appeared when Evil Cooper was shot have descended to the earth like hobo woodsmen aliens, and attempt to stop a couple on the highway. The lead man (credited as the Woodsman) stoops into their window and repeats, “Gotta light” over and over in a metallic voice as he stares at them with a cigarette in his mouth. It’s a terrifying moment reminiscent of Night of the Living Dead, but the couple finally escapes nearly running over other woodsmen. At the same time one of the eggs we saw spew out with Bob, hatches in the desert and a creature with the body of an insect and the legs of a frog crawls out of it. The Woodsman wanders into town to the radio station KPJK, where he crushes the head of a secretary after asking, “Gotta light?” over and over, and then does the same to the DJ. With the DJ subdued, the Woodsman talks over the radio repeating over and over, “This is the water, and this is the well, drink full and descend. The horse is the white of the eyes and dark within.” The words have an affect on the populace, making them pass out. The girl who found the penny sleeps on her bed, and the insect/frog flies into her window and crawls into her mouth. Is this Bob’s first possession of a human? Are we witnessing the birth of Bob? 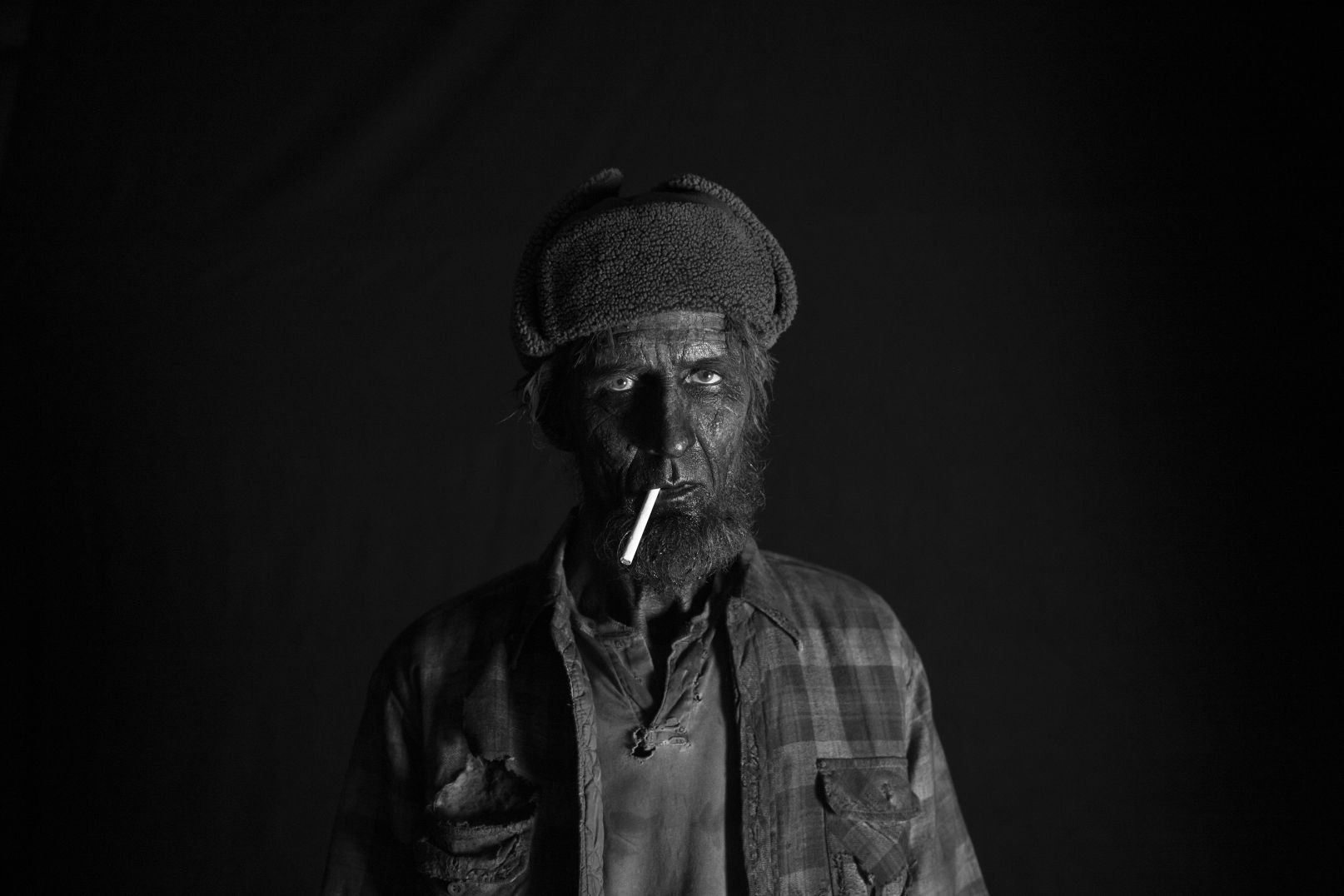