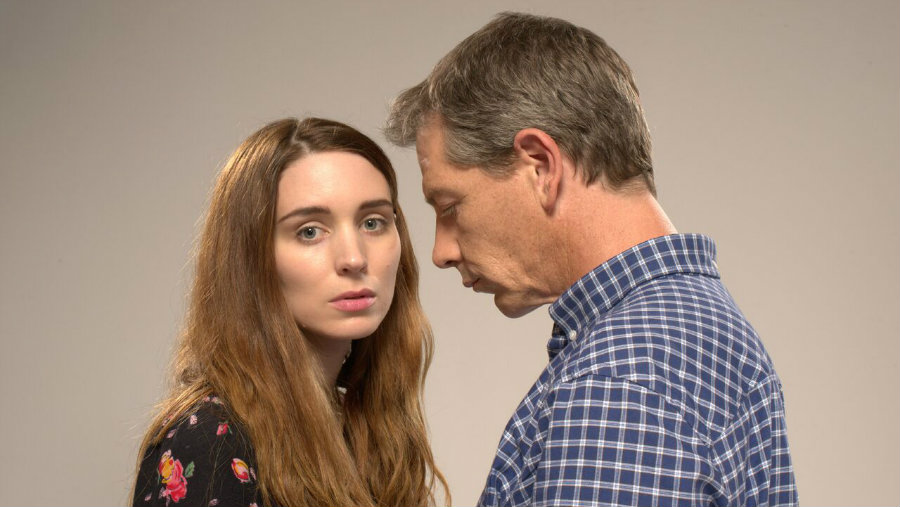 Make no mistake that Una is a difficult movie to recommend to everyone, but it’s also a movie that’s so thought-provoking in its subject matter, you’ll have a lot to talk about afterwards, especially if you (unwittingly) take someone special to see this on date night.

A little background: Una is a movie based on David Harrower’s award-winning play Blackbird, that Harrower adapted along with theater director Benedict Andrews, who makes his film directorial debut with the movie.

I probably should insert here that the plot of the movie is a difficult one, dealing with a subject that not everyone is going to be thrilled with. Basically, Rooney Mara plays Una, a young woman in her late 20s who decides to confront the man with whom she had a sexual relationship at the age of 13. That man is her former neighbor Ray, played by Ben Mendelsohn (Bloodline), and they haven’t seen each other in 15 years, since he was thrown into jail for committing that unthinkable act, even though the younger Una (played by Ruby Stokes) actually loved Ray. Even so, that kind of relationship is frowned upon and Ray has tried to set up a new life with a new job and wife and no one knowing about his past… until Una shows up at his workplace.

Even though Una is based on a play and it certainly is very much a dialogue-driven character piece, it never feels like filmed theatrical piece as Andrews takes advantage of what can be done in film to flashback to the original relationship that got both these adults into trouble. Even so, it’s still very much a single location film since most of the movie takes place in the warehouse where Ray is now working. Andrews has to find a way to keep the film interesting, and he does so by moving the two leads around into different spaces, and also adding Riz Ahmed (The Night Of), Ray’s co-worker Scott who gets caught in the middle of something he can’t figure out.

Mara gives a performance that’s powerful and vulnerable at the same time, Andrews clearly using his ability as a theater director to get something out of her we haven’t seen before, not even in Todd Haynes’ Carol. What Mara puts herself through in the film, physically and emotionally, makes this one of her very best performances.

Mendelsohn is equally amazing as Ray that you actually feel bad for him, that maybe what happened wasn’t completely his fault, yet he ended up paying for it. I’ve been a fan of Mendelsohn since I first saw him in the Australian crime-drama Animal Kingdom. In that movie, he played a bad person, and he’s played a number of movie villains including in last year’s Rogue One, but Una shows you that he has a wide range of emotions and personalities.

Even Riz Ahmed’s smaller role does a lot to move the story forward, especially when he offers Una a ride after hours of interactions with Ray, and ends up getting more involved with her than expected.

The key is that Harrower’s stage play script has been refined and improved upon for the movie, and when you have such a strong script and three solid actors, everything else is cake.

There’s a lot of interesting angles and avenues into Una, including conversations about whether the relationship at the heart of the movie is truly wrong or disturbing or just something that happened, as these things do. In other words, the relationship between 13-year-old Una and the older Ray is consensual, but still, Ray gets blamed for what happened.

The film’s flashbacks to show how this relationship came to be is handled in an extremely tasteful way so that you don’t feel as gross about watching it… and again, Mendelsohn is so good in those flashback scenes, as is relative newcomer Ruby Stokes, they bring a lot to the story, even as you’re taken away from the amazing Mara-Mendelsohn face-off that drives the film.

Either way, it’s a terrific example of how one can take a stageplay and turn it into something far more vast, while still remaining extremely intimate, sometimes to the point where it makes the audience uncomfortable. (But I also should add that the movie does have some humor that’s more situational, as you realize how awkward the whole thing is for Ray.)

Una is still playing at the Landmark Sunshine in New York (and if you go tonight at 7pm, you’ll get a QnA with Andrews and the two main actors), and then it will open in L.A. at the Arclight Hollywood and Landmark Regent next Friday with the actors and director answering questions.