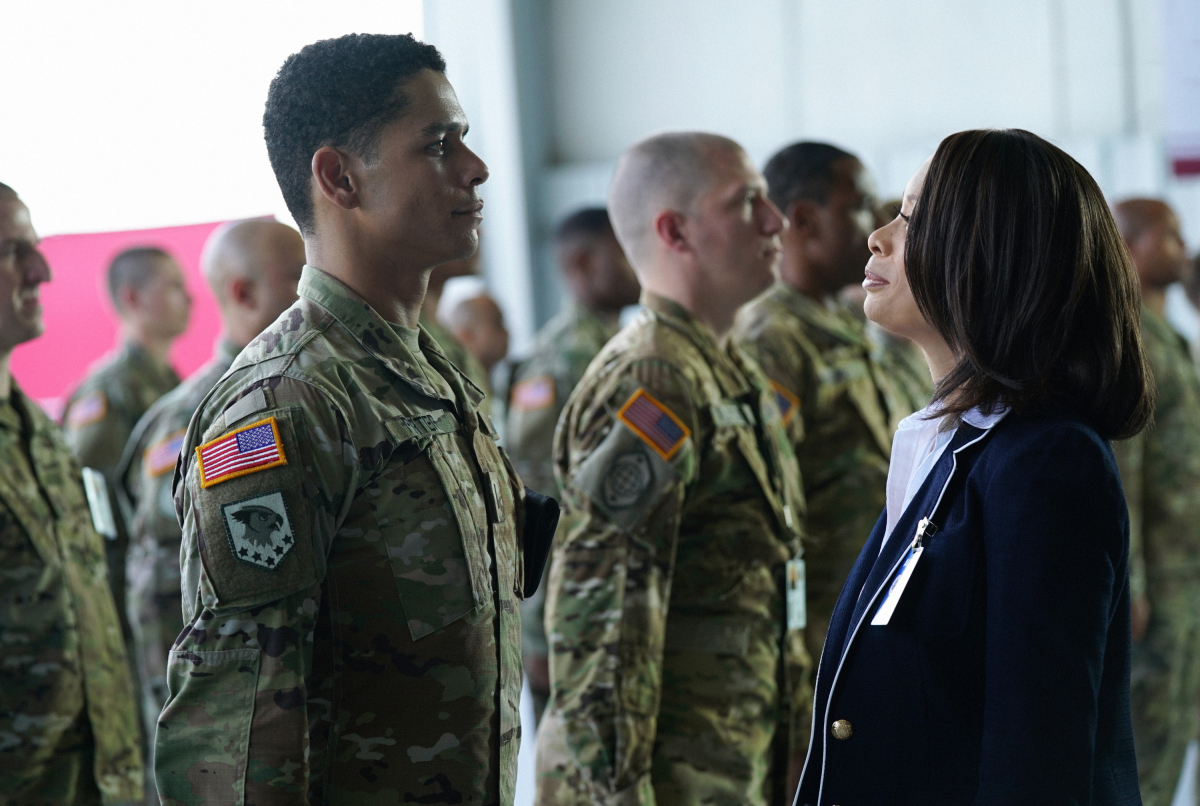 Week two of Valor isn’t all that much more enlightening or gripping than week one. We’re introduced to a new character and new conflict — Adam Coogan, along with a bunch of Delta Force guys, is brought in to help with this prisoner situation (hereafter referred to as ‘Perseus’). We immediately learn that Adam and Gallo aren’t pals. While Thea is briefing everybody on what we’re going to be up to this episode (namely doing a demonstration for Important People in prep for trying to extract the prisoners and leading up to a military ball the Important People will attend), Gallo and Adam throw glares at one another from across the room.

What’s actually the most fun part of this scene — other than the fact that these highly disciplined special ops guys can’t control themselves and remain professional during an important talk — is that Madani mimics Gallo’s body language the whole time. It’s a choice give their dubious romantic status, and a really enjoyable one at that.

When they leave the talk, Gallo tells Madani that he used to work with Adam, and that Gallo received a promotion and a girl that Adam had coveted. Yawn. I guess since we’ve got this scandalous secret conspiracy going on already, they didn’t want to shoehorn in another massive issue in flashbacks, but still. Could’ve gone with something a little more dynamic. 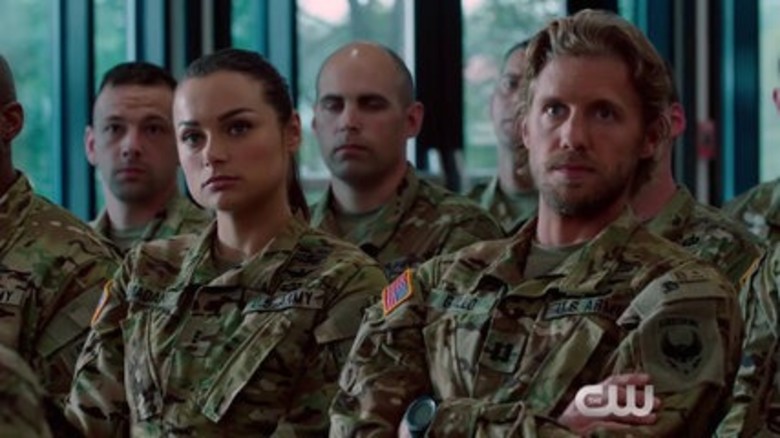 It feels especially flimsy as we move further into the episode, because a lot of the action is about the demonstration Gallo, Madani, and Adam will have to do for the congresspeople who are going to ride along. There’s immediate tension, because Adam insists on extra equipment that Gallo and Madani know will weigh the plane down and make it difficult to get the angle and range Adam requires to shoot at the targets. A solution (apparently) would be to fly lower to the ground, but Gallo is prohibited from doing so on pain of being removed from Perseus. This obviously can’t happen, since the whole mission is built around Madani and Gallo’s lie.

Speaking of which, we get more into the flashbacks this week, but what’s going on is still a little murky, and also… just not that interesting, frankly. After shooting Lasky, Gallo and Madani have to move on, knowing that they’re in a dangerous position if they stay where they’ve shot him. Gallo tells Madani that they should lie when they get back, and say that they don’t know what happened to Lasky and the captive. And they certainly shouldn’t let on that they know that the captive isn’t Somali at all, but an American soldier reported killed in action. This will give them time to research and figure out what’s going on, and also protect Madani from legal issues after shooting and killing another American.

So that’s it. That’s the whole thing. That’s the whole conspiracy. I find it pretty wild for people operating on a very high level in the military, which is a very structured, loyalty-oriented career path, to default to lying to uncover a conspiracy rather than assuming their commanding officers know what they’re doing. Like, yes, this is a TV show, this is definitely some kind of dark bad conspiracy and they can’t know who to trust — but that is such a bizarre assumption for Madani and Gallo to immediately make. I was hoping that the flashback would reveal some massive, red flag irregularity or something more elaborate and complicated that made their deception sympathetic and understandable, but as stands, it just seems… kinda crazy, honestly.

Anyway, back in the present, Madani and her dreamy boyfriend Ian continue to struggle. Ian isn’t okay with Madani holding out on him, but Madani can’t tell him what’s going on for fear of obligating him, as an Intelligence Officer reporting regularly to Thea, to rat her out. It’s a precarious position to be in, and Madani doesn’t seem to properly appreciate it. Instead of placating her boyfriend who’s in the position to, with or without specific information, really mess her life up, she spends a lot of time flirting with Gallo so that Ian can see from a distance and look brooding. Meanwhile, Thea continues to flirt with him every time they interact, and while he doesn’t necessarily parry back, he’s certainly not blocking her, so, uh. This isn’t going to go well.

In the first test run on target practice, Gallo and Ian get in a spat after Gallo and Madani aren’t able to get him the angle he wants because of the heavy equipment. When they do the actual run — complete with, surprise, Ian’s mother as a congresswoman, riding along with Madani, of whom she disapproves — it goes off without a hitch, but only because Gallo flies lower than he was meant to. His commanding officer is mad, but the congresswoman is impressed, which is all that really matters in the end. She announces her excitement to have both he and Madani on operation Perseus, so they’re out of the woods for now. That said, it’s likely to be temporary, since Gallo will no doubt do something stupid in the course of fighting with Adam, and Madani is still taking drugs in order to get through flights. 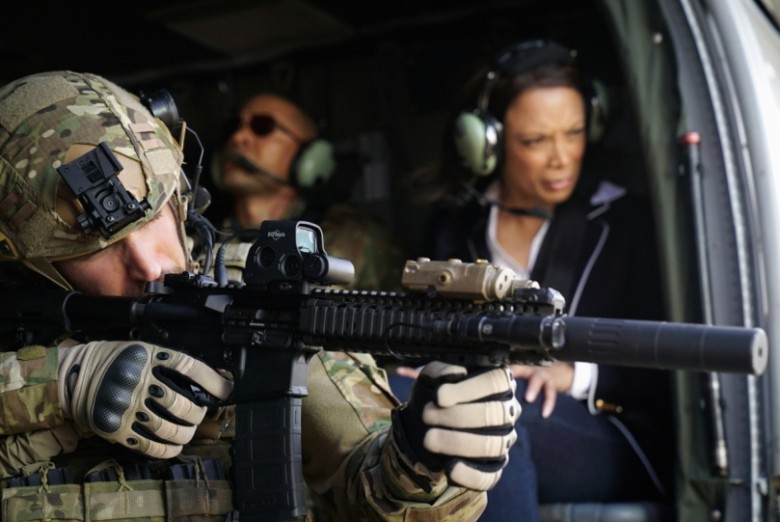 They move on to the ball, and Madani and Gallo flirt some more. It’s really ridiculous, honestly. I know that we’re supposed to be on their side, and they are sufficiently charming I suppose, but you really just end up feeling horrible for Ian, who’s just trying to do his job with zero support or empathy from his girlfriend, toward whom he’s being ridiculously patient and compassionate. His mother vocally dislikes her, though, so this was all probably doomed from the start.

At the ball, Madani has a pointed exchange with Thea, where Thea reveals that she was close to one of the guys on the mission in Somalia, and that she has a personal stake in getting to the bottom of what’s going on. Later, Madani and Gallo are sidelined by a woman from the archives who has a bit more information on David Goundry — the soldier who was reported dead, but Gallo and Madani actually picked up in Somalia. Between her insight and side investigations that Gallo and Madani do on their own, they glean that David Goundry was reported dead by Lasky after parachuting into Somalia — so he was likely part of some deep cover mission. Again, it seems crazy that they’re not immediately assuming this is something above their security clearance, but we’re in CW land, where the points are made up and the rules don’t matter.

Sidenote, they do this shady investigation into something that they claim to have already told everything they know about in uniform. With name tags. It’d be so easy for the guy they talk to to trace this back to them and out them as knowing there’s something more going on — this is so, so sloppy coming from special ops people. Honestly.

Valor is vaguely disappointing, but not truly awful? It’s watchable, but not enriching in any way. They can’t seem to find a balance between personal drama and the actual conspiracy, and so it all ends up feeling vaguely out of place and a little ridiculous.