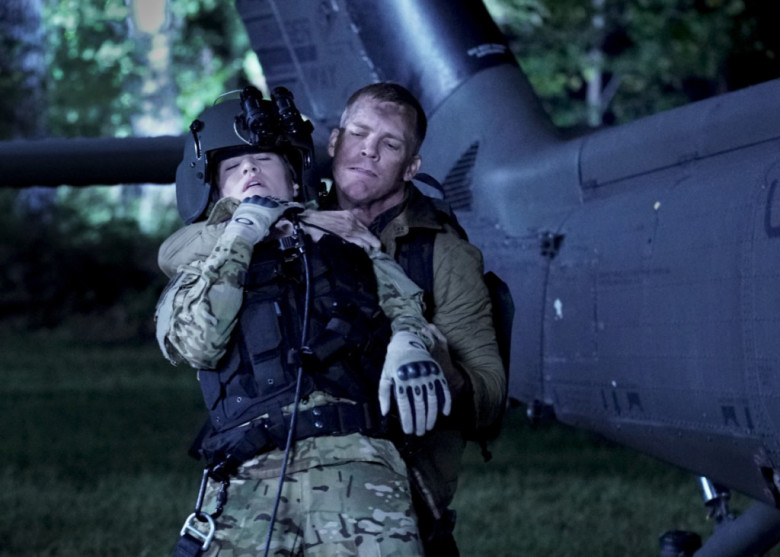 This week on Valor, we’re finally tying our separate plot threads together — not that they weren’t, obviously, all vaguely connected anyway, but this is the episode where they start directly interacting. Nora and Gallo are asked to be the only helo on a mission to retrieve Davis Goundry from the park Nora and Ian tracked him to. This is, uh, highly problematic at best because obviously Nora and Gallo have been trying to hide the true nature of their exchange with Goundry when they initially were meant to retrieve him, but obviously they can’t do anything but go along with it.

Jimmy, meanwhile, still in captivity, finds a temporary ally who agrees to get Jimmy a way to make a call back into the US, while the ally hightails it to the US embassy for protection after effectively defecting from Khalid. The defector knows that somebody working for Khalid has made it to the US with some kind of weapon made out of the missing uranium and intends to cause some serious damage — his conscience won’t allow him to be part of it, so he goes to tell Jimmy he’s leaving (along with all of this highly sensitive information), which is when Jimmy turns him. Of course, after the fact, we find out the defector was caught and killed before reaching the Embassy. But Jimmy manages to get a call out to Jess (I get it, she’s his wife, of course she’s who he wants to talk to, but he really should’ve called… literally anybody else since Jess can’t be helpful in any official capacity) and tells her what’s going on. Jess’s phone line is tapped, so the army now knows that Goundry is potentially armed with some kind of bomb.

Nora is trying to get fully on board with moving in with Ian, but he can sense her hesitation. Ian is consistently the loveliest man on this show, so I really need this Nora and Gallo love story to actually play out so we can let poor Ian off the hook. Further complicating the already messy personal-professional situation going on here, Ian is asked to be the one to make a call on the mission if they need to take Goundry out — the head CIA guy is concerned that Thea has a conflict of interest and will hesitate to give the order. I’m not wildly fond of one man telling another man that even though it’s not really his jurisdiction he gets to make the tough call that the woman might be too emotional to make. Little patronizing, little gross, little weird since Thea has been nothing but effective this whole time.

She does, however, have a conflict of interest. We find out that Thea recruited Goundry to the CIA in the first place. We also finally get an explanation for the dominoes, which is really… blasé and not at all a reveal? Like, having people possess this domino that clearly indicates they’re part of something larger and all connected somehow was a potentially interesting thing if there were, as I assumed, some kind of conspiracy beneath the official CIA line… But we find out the dominoes were just for people involved in the operation to buy uranium and destroy it to just get it off the market to identify each other. So Thea, Khalid, Goundry, and so forth. We’re still missing two dominoes, as Goundry points out in a flashback, so there’s still a reveal to come, I guess. But I was disappointed that the answer to “super secret domino club” was more “official government operation” as opposed to “Illuminati”, y’know?

The most interesting information we get from these flashbacks and from digging into Thea’s connection to Goundry a bit, as far as I’m concerned, is that Thea is dead sure that Goundry is a patriot, and so there’s some motivation for his actions that they’re missing.

Unfortunately, there’s no way to ask him. They find him, but Goundry climbs into the helo and holds Nora and Gallo at gunpoint as they argue. But during the scuffle, Ian sees him physically threatening Nora and makes the call — a sniper takes Goundry out. So we get no answers, but at least Nora and Gallo are technically safe from Goundry revealing their secrets, though they’re not completely safe; Thea comes back from the mission extra certain that Nora and Gallo are hiding something, so we can expect her to double down on surveillance of them in the future. Zoe might also have heard something while Goundry, Gallo, and Nora were arguing, but that doesn’t play out just yet.

What she’s likely to find isn’t what she thinks, however. Earlier in the episode, Thea asked Gallo who he thinks he’d see before he died. (She also intimated that “normal” people would know the answer to that question, whereas Gallo didn’t. Is this true outside of TV land? Like, unless you’re in love or have children, I’m not sure there’s an easy obvious answer to that question, but okay, Thea.) Gallo reveals to Nora that when he thought Goundry might kill them, the only face in his head was Nora’s.

In my favorite moment from the show to date, Nora responds with, “I don’t know what to do with that.” Girl, same.

So we’re edging back into the Nora and Gallo definitely into each other plot line which will no doubt reach its climax soon (pun intended), timed perfectly with Thea’s “they’re up to something” plot line. It would be hilarious if Nora and Gallo get to keep their secret because Thea thinks their secret is that they’re together.

Ian and Nora move in together, and have this baffling interaction where Ian is upset over having given the order to kill somebody, and Nora cries and tells him that she’s not okay either. He says that now that they live together, there’s no hiding anything, but then… doesn’t ask her why she’s not okay? Clearly her crying isn’t a common occurrence, and Ian has been adamant the whole season that she’s hiding things from him, and so his response is to… go to sleep? Super functional relationship there, kids. 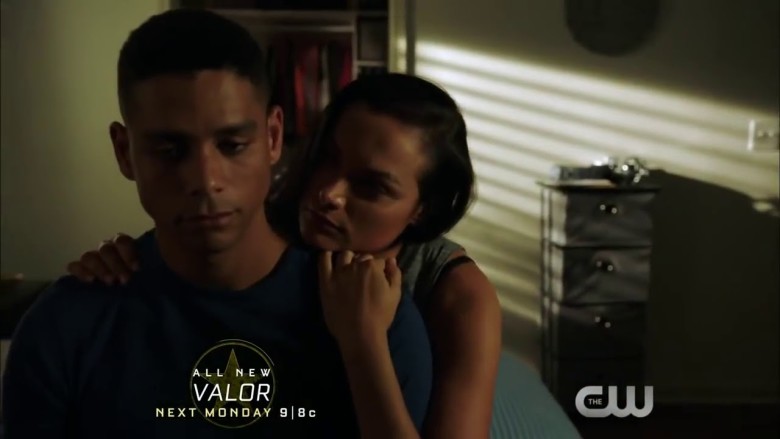 Lastly, we end the episode with Goundry’s sister showing up on Gallo’s doorstep with a VHS tape Goundry asked her to deliver if he didn’t return by a certain time. She knows that he’s dead since he hasn’t returned, and Gallo confirms. So next time it looks like we’re going to get another layer to this conspiracy — probably some information as to how what Goundry was doing was actually in the best interest of the country, so maybe we’ll get some double crossin’ going on with the CIA operatives involved — which will give Valor another chance to come up with something a little more engaging. Here’s hoping.