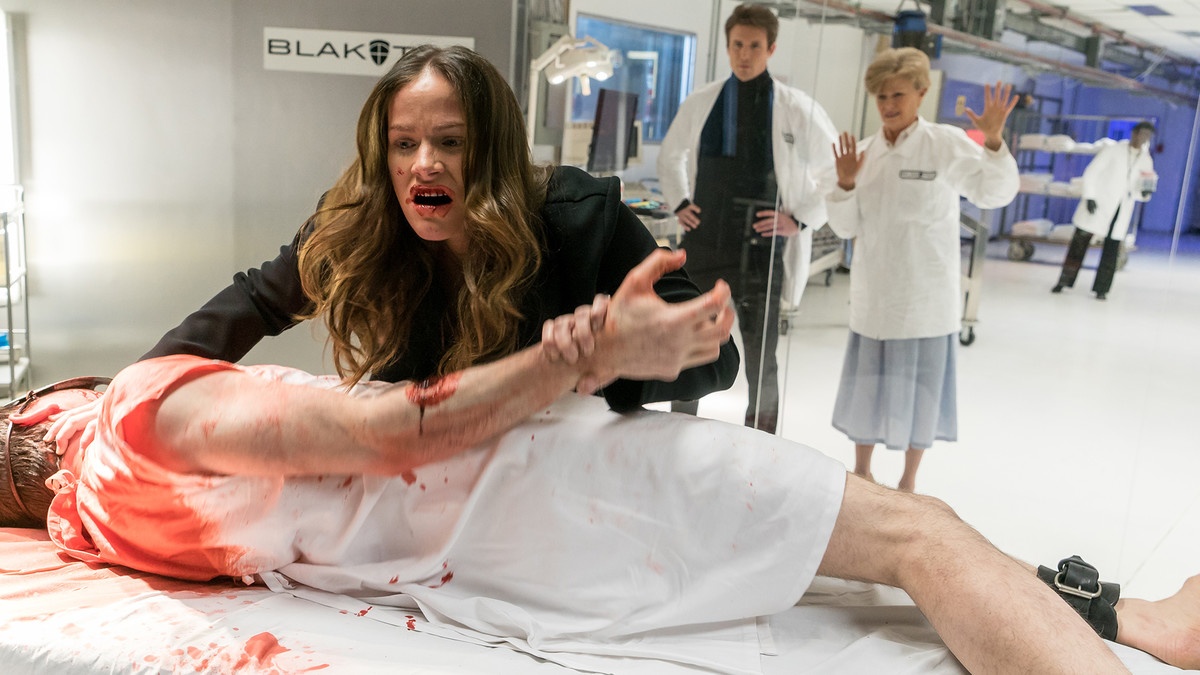 Van Helsing returns to the show and opens a whole new mystery in “Base Pair.” The teaser featured some unknown survivor following the message and map on the red balloons to the mountain citadel. He gets a little confused when he comes to a fork in the trail not indicated on the map. He chooses the western trail but gets attacked and snacked by a feral a mile down the road. Yes, this is long form narrative, but this red-balloon gag still appears weak. I’d rather see what happened to Julius, is he really gone?

Van wakes up in a nice private room, it’s set up more like a hotel room than a prison. She attacks the woman in a “Blak Tek” lab-coat, Abigal, who is thrilled to see she’s awake and heads off down the hall. She’s in a huge well-lit, well-powered complex. Van pounds on a couple guards and runs into Dr. Bruce Harrison. He wants her to settle down so she pounds on him too. Van makes all the way to a huge bay window looking down on the snowy peaks of other mountain tops. Gotta be way up there, no vampires, no happy people either. Big points for the snowy mountain lair, near impossible to infiltrate or escape from. Abigail arrives again with a sandwich. She’s already my hero. Abigail says she knows Dr. Bruce is a little off, she didn’t like the way he gassed Van’s friends. Van just wants to get back to them but Abigail asks her to stay and help them with their cure research… and save the world. 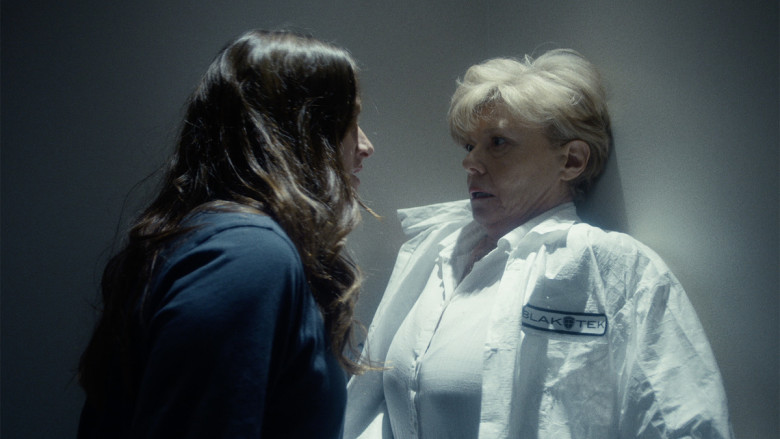 This whole episode is a maze of deceit on top of a web of danger. The big question is, who does Van trust? The second question is, who does the audience trust? They wrote in some great layers to play with. Van doesn’t trust anyone at first. They have observation rooms with quiet vamps, vamps that have survived surgical procedures, and noisy ferals. Dr. Bruce shows Van a vamp that’s very important to his research. Martin volunteered to get injected with anti-vamp serum, but it didn’t work, it turned him vamp too. Bruce wants Van to save him so he can run before and after blood work to isolate the curing agents in her blood. She doesn’t agree at first, she asks to sleep on it. Easier said than done, the guy in the room next to Van’s whispers cautions to her in the night. “Don’t trust anyway, there’s more going on at the lab than just research for a cure, and follow her nightmare visions.”

Abigail claims she knew Van’s mother back at the farm. She says her mother always believed the vamps were coming, long before anyone else did. Her mother tried a serum before she knew she was pregnant with twins. Then, she tried to protect them after they were born special. Abigail is full of great information. Van sneaks into Bruce’s office and finds a book her mother gave him chronicling the history of vampires. He also has a file on Dmitri. Van keeps thinking about her memories of the farm and realizes Bruce looks a lot like the guy who would observe her and Scarlett in the play-room. 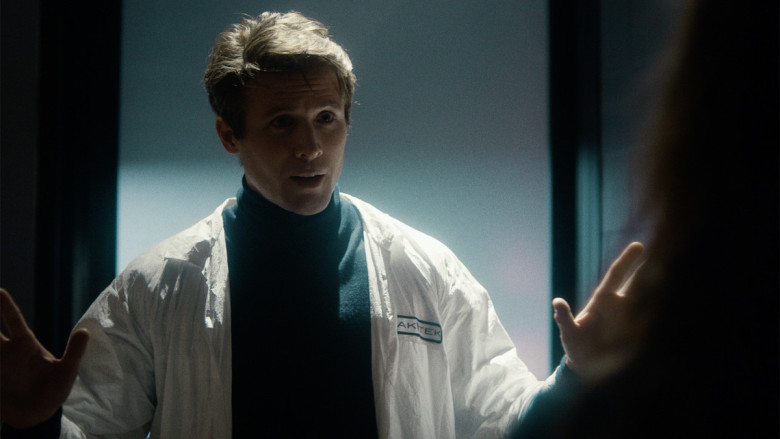 Van agrees to help Martin and they agree to send a search party out for Axel and the rest of the team. That’s what Van wanted and it sounds like a good thing. Martin breaks free and attacks some labbies but Van does bite him, he vomits out his vamp virus and appears to get better. He thanks her for saving his life and explains why he volunteered in the first place. He hopes Van is the key saving everyone.

Later, Van breaks into Bruce’s office again, this time she finds and old photo of him with a team of researchers holding a book written by him, “Dying to Live.” Now, Van is sure he’s the guy from her memories, he hasn’t changed a bit. Van challenges Abigail’s trust of Bruce but also discovers Abigail is the name of the woman who gave Bruce the vampire history book, Abigail Van Helsing. Van is thrilled find her mother and Abigail is thrilled to learn Scarlett is still alive. She thought she died in the house fire Mr. Harker staged. That guy may not have been father of the year, but way ahead of the curve when it came to protecting his daughter. 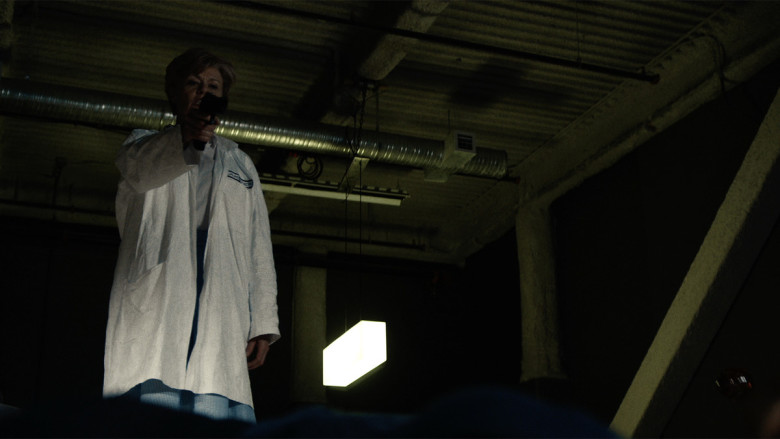 The lies fall apart faster than they were presented. Bruce and Abigail both want Van to lead them to the elder. Bruce isn’t looking for a cure so much as a map the vamp DNA, isolate, and separate certain features. He hasn’t aged in thirty years, but he needs constant injections to stay that way, he wants a permanent fix. Van grabs Abigail and tells her they need to break out and find her friends. She finds Abigail doing an autopsy on Martin, but claims he died in the middle of the night. Van wipes out a squad of security guards and opens all the observation cells to keep the others busy while she and Abigail find a way down the mountain.

Abigail turns on Van before they get out of the building, she isn’t her mother after all and she probably knew Bruce was whispering to Van through a speaker in her air vent. Abigail shoots Van, now that she knows Scarlett is alive and has the key (Dmitri has the key, but Van doesn’t know that,) she doesn’t need Van anymore. The thing I wonder is this, do Abigail and Bruce really mistrust each other? This was a nifty little story trick.