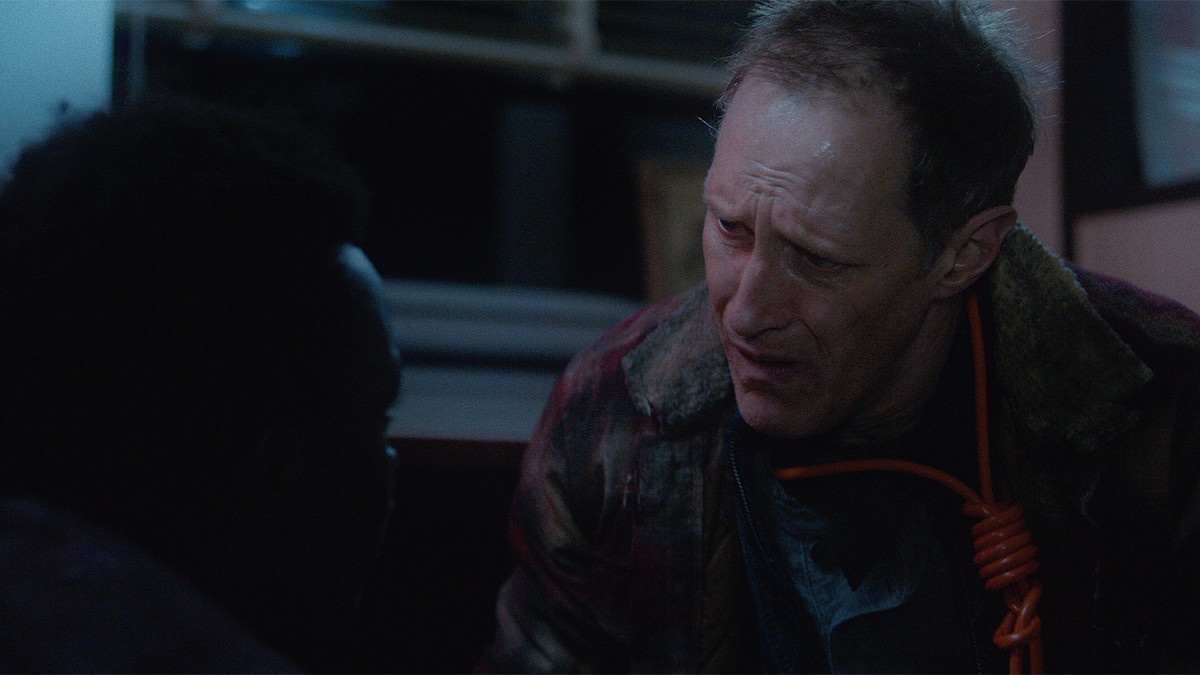 Van Helsing is missing from the narrative this week while we see the entire arc of two of the show’s most compelling characters in “Be True.” Good shows have deep character benches to supplement and keep story fresh. This has been one of the best Van Helsing improvements this season. “Be True” begins in 2018 at the moment in the vampire rising when Mohamad meets Sam for the first time. He doesn’t know Sam is deaf but he respects the big guy’s skill at slaying ferals. For Sam, this skill runs deep, planted and nurtured in his brutal childhood. Sam’s father was a minister, whippings, beatings, and other kinds of abuse were common from the man with the collar.

A few days after he sees Sam for the first time, he sees him again through an office building window. Sam is prepping a noose to hang himself. Mohamad rushes to stop him and uses a spear to cut the noose loose. They share a fantastic scene, creepy and intimate at the same time, where they pledge friendship. Sam doesn’t communicate his hobby of murdering and making finger chains at this point. They move out together, tight as Butch and Sundance. What a difference a few years and several serial murders make. 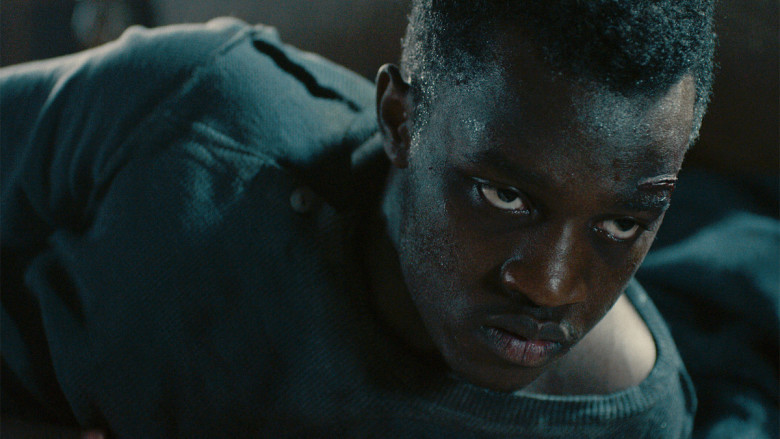 Sam drags Mohamad to his campsite lair to let him rest and heal up. This is same campsite his father worked at, the same chapel where he preached and abused on young Sam. There is no good reason for abusing and whipping a young boy, right? Mohamad’s wounds are not healing well, the room fills with the stench of necrotic flesh. Sam planned to bite Mohamad and turn him vamp, but Mohamad explains Van already bit him, his blood would be toxic to Sam. We’ll circle back to that a little later.

Sam has several people tied up and he bleeds them for nourishment. He also keeps a few more in the cellar for food. He brings up Cara, a young woman to look after Mohamad. These scenes are very tense, Cara is a fighter and she can see Mohamad is important to Sam. Cara tells Mohamad she has to cut the necrotic flesh away from his wounds all the way back to the healthy flesh. If that does sound brutal enough, she doesn’t have a knife, Cara uses a bent tin can lid. Mohamad doesn’t like the sound of the procedure, but he isn’t ready to die either. She cuts away the dead stuff but also uses the time to get to know him. 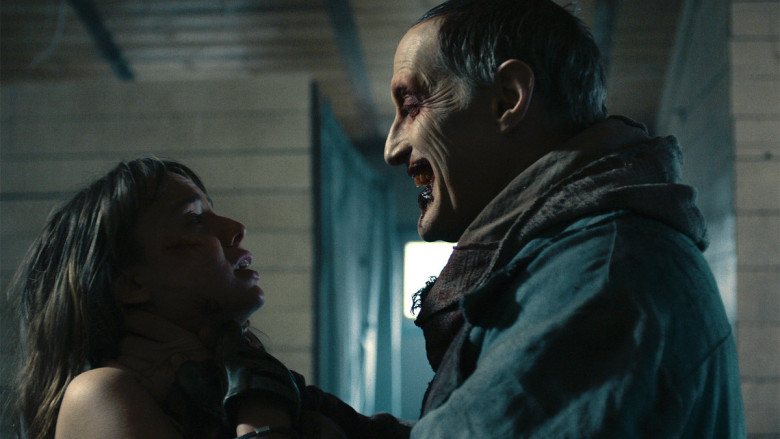 Cara explains she only has two options, die at Sam’s hands, or try to escape. She’s been using water to rot the floor boards in hopes of breaking through. Mohamad suggests a third option, they could kill Sam. Meanwhile, we learn one of the blood taps is Sam’s own father. Sam’s father beat him for killing squirrels and other small animals. Sam gauged out his father’s eye and his father retaliated by blowing out Sam’s hearing. These are tough, dramatic scenes and it’s no wonder Christopher Heyerdahl has so much work on his plate. That said, his best stuff is yet to come with Mohamad.

Sam discovers Cara trying to chip through the rotten wood boards and Mohamad attacks with a chain garrote. Cara stabs Sam several times and the chain garrote breaks. Mohamad is still too weak to fight so Sam focusses his abuse on Cara. Mohamad begs to let Cara go and Sam immediately agrees. He lets her go and talks with Mohamad about the nature of their friendship, homicidal connection, and love for each other. Cara doesn’t stop to help anyone else, she runs as fast and far as she can.

Mohamad reminds Sam he saved his life, but Sam explains he was going to kill Mohamad first and chose to let him live. Mohamad has a list of mean and hurtful things to say about Sam; no one ever liked him much less loved him. It appears he’s trying to provoke Sam into killing him to buy Cara more time, but Sam leaves to hunt the girl and locks Mohamad in his stinky room, with the rotten boards. 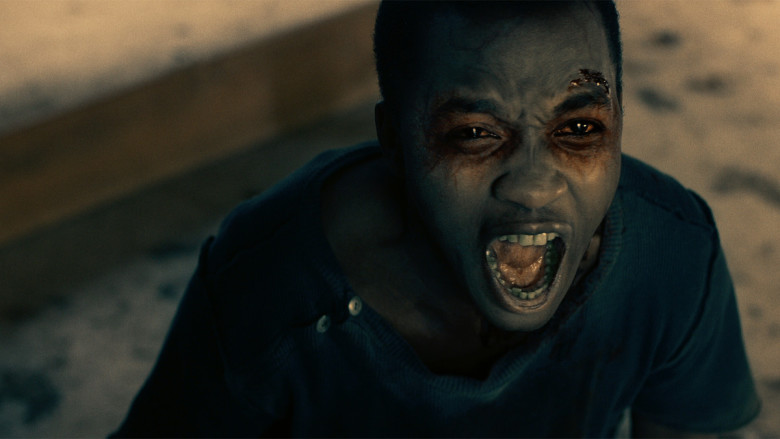 It’s a race against time, Mohamad desperately punches and scratches at the soft wooden boards while Cara tries to keep away from Sam. He’s too quick. Sam catches up to Cara and brings her back to his feeding-draining boards. Mohamad breaks free at this time and tries to save Cara but Sam is already taking a bite. Mohamad snatches some scissors from Sam’s pocket and stabs Cara. Still alive, she asks him to make sure he completes the job, and he does. Sam rubs Mohamad’s face in his own homicidal tendencies. Then, Mohamad uses the scissors to commit suicide.

In the final weird twist, Sam bites Mohamad as he dies. Maybe he thinks Van will kill him too, a Romeo and Romeo ending, but it doesn’t. He carries Mohamad into the chapel, sets him on a bench, and hangs himself. I’m not even sure vamp Sam can die by hanging. Then he hears some moans and Mohamad gets off the bench. He isn’t human nor does he seem full vamp. He some blue toxic form of feral. Next week, Scarlett arrives at Crooked Falls.