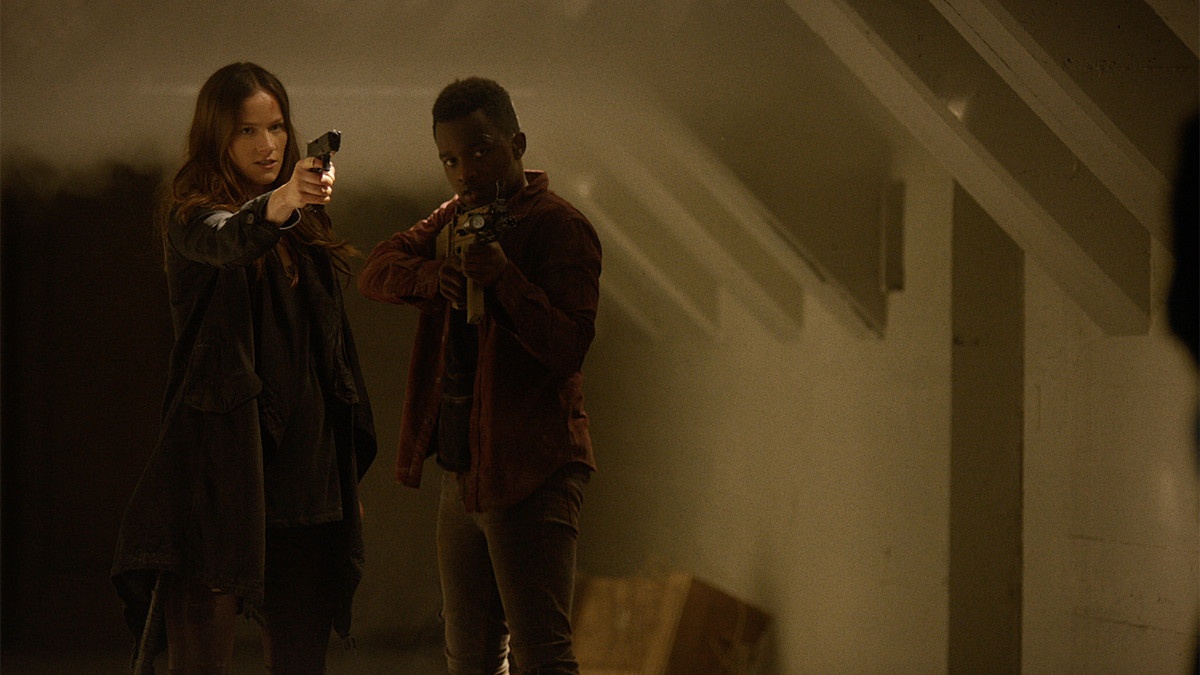 Van Helsing returns for the second season and finds her vampire daughter in, “Began Again.” The episode opens on a couple tucked away safely in the mountains. Jesse ties maps to red balloons, showing survivors how to reach safety. The man on site doesn’t like the idea, but Jesse sees the importance of giving people hope. We don’t see these people again, or Sam, or vampire Axel for that matter. However, most of the others are back.

We find Van Helsing, Phil, Dmitri and the others right where we left them, battling for supremacy in The Citadel. Mohamad finds his sister Sheema pinned under rubble. He tries to free her, but she says the debris is crushing her body. Sheema begs Mohamad to find Dmitri or Rebecca, she can’t wait to go full vampire. Mohamad won’t help her do that, instead, he suffocates her. At first, this seems shocking for this kid, but Mohamad has done this sort of thing before. There are no lines left for him to cross and no real mission to drive him. 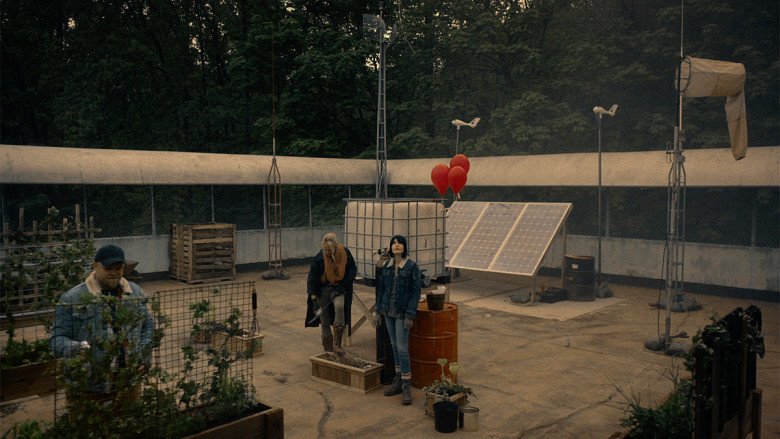 Vanessa faces a different Dylan than the one she lost during her coma years. Dylan is all vamp and full of teen crank. She accuses Van of abandoning her and claims Rebecca rescued and cared for her. Van attacks Rebecca and drags her into morning light, her face starts to burn, but Dylan beats Van with a handy statue and escapes. When Van regains consciousness, she immediately goes looking for Dylan, but she finds Mohamad by Sheema’s body. Van is still grudging on Mohamad’s betrayal and warns him not to follow her.

Rebecca drags what’s left of her out of the sunlight and crawls down the hall where she finds Dmitri negotiating with Taka about their future. At first, Taka considers letting Dmitri go for considerations, but Rebecca calls from the doorway. Taka is distracted by his changing options for a moment then, Antanasia arrives and drives a silver dagger through one of Rebecca’s few working organs and kills her. Dmitri uses his last bit of energy to attack Taka and rip his throat out. They introduced Taka late last season when they should have spent more time with him, his legend, and his duplicitous nature. Imagine John Connor betraying the human rebels. They did a poor job pacing their story telling last season. 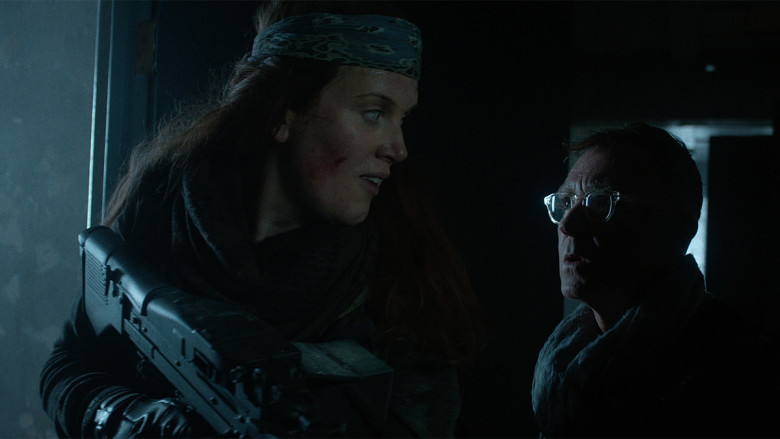 We know Van wants her little girl back, but what does Dmitri want? His Citadel is crumbling, his troops are decimated, and Julius is hiding someplace else safely with his own group of vamps. Antanasia convinces Dmitri to feed on what’s left of Taka, and escape with her to repair and prepare for their return. Dmitri still has plans for Dylan. But we really don’t know what those are anymore.

Phil searches the labyrinthine halls of The Citadel for Van, but doesn’t find her. Someone new and formidable finds him when he needs it most. Lucky is a new character to the show. Her mission is to blow up the power generator but she takes Phil with her and promises to help him find Van after he helps her place explosives.

Phil and Lucky stumble across Dr. Sholomenko. That slime ball convinces them he was Dmitri’s victim and agrees to help Phil and Lucky find the boiler room. Instead, he tricks them and locks them in a stairwell, which happens to lead to the boiler room. Phil and Lucky shoot their way past the vamp security team, she plants her explosives and blows the power building. Phil and Lucky catch up to a squad of her buddies discussing how Brandan and Taka died like heroes. Phil gets a different picture from the clues. He follows Dmitri’s blood trail through the secret door and down the dark maintenance tunnels. The squad walks right into a trap set by Antanasia, everyone but Phil and Lucky are crushed by an industrial crusher. It happened. Someone wrote the sequence and a group of talented people put it together and shot it. 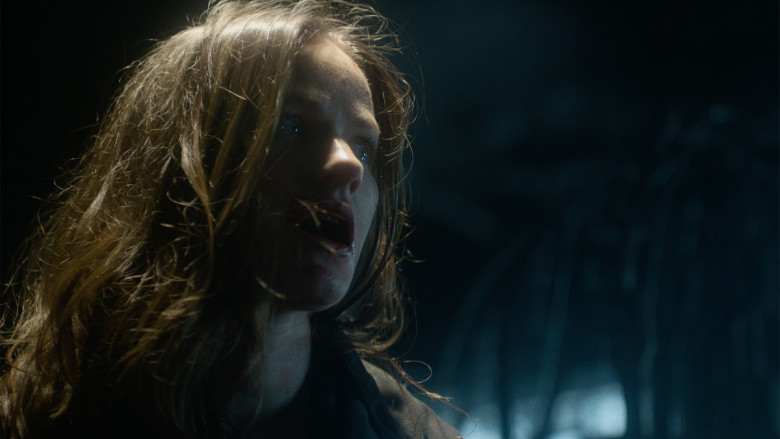 Meanwhile, Van nibbles on Mohamad. His blood charges her special senses, and she follows Dylan’s scent. Dr. Sholomenko is escaping with Dylan when Van catches them. There is a talky showdown, Sholomenko admits he’s been experimenting on Dylan. She’s not the same as other vamps and Van can’t reverse her with a bite. Dylan bites Sholomenko and Van fills him with hot lead. I’m glad this guy is gone, he was too creepy and his scenes were always a little bumpy.

This was an excellent return for a show that really struggled for pace and story in its first season. They got rid of Rebecca, who I considered a stronger story character than Dmitri. Taka, the treacherous rebel leader, Dr. Slime, and weirdo Sheema are also done. With the death of Sheema, Mohamad lacks personal character purpose. However, I like the chaotic energy he brings. Now that Van has Dylan, she’ll probably search for a cure and have to defend the cranky teen vamp from those that want her hybrid blood and others who just want her dead. Axel could still return, maybe Van could even fix him if he doesn’t hold a grudge. Finally, there must be a good reason for those red balloons in the teaser. The little mysteries didn’t always light up the board last season, maybe as Jesse said, “there’s still hope.”