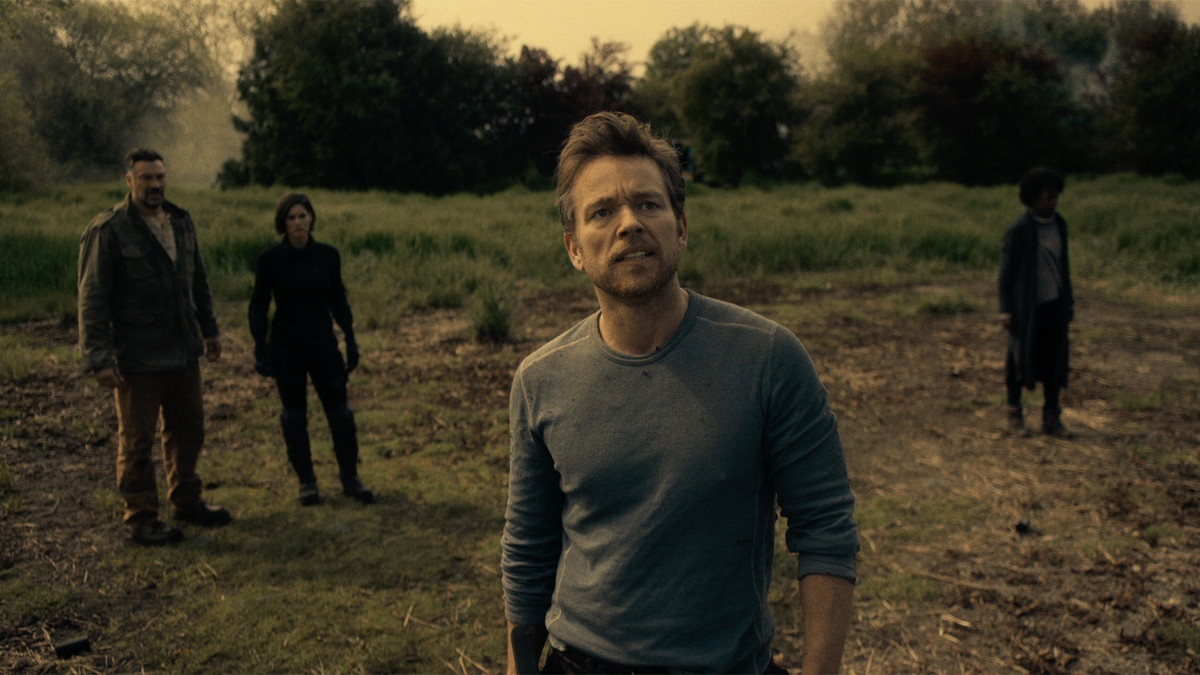 Van Helsing delivers an excellent episode without the title character with “Big Mama.” Now that we have Axel back there is plenty of charisma for Scarlett and Julius to hold an episode without Van. Axel wakes up after the helicopter flies off with Van to some secret location. He thought they headed North, but Scarlett claims she fell after Axel and she saw them head South. I don’t believe her 100%, but Axel does. Team Scarlett turns Wanda South, but they don’t make it too far before they are pulled over by a pair of police cars. Sheriff Walt Turner, Deputy Dan, and two others stop Wanda for a little chat.

Axel admits they’re headed for Denver, someplace above the clouds. Sheriff says a local place; Crooked Falls is just as good and not as far. He invites them to his fort, in town, get a hot meal, shower, and gather other supplies before heading on. Axel is interested, he’d like to eat and he doesn’t want a gunfight on the road with humans. Scarlett sniffs out the creepy side of Walt and thinks it’s a bad idea.

The Sheriff’s fort is legit. It’s a well secured, solid building, capable of housing up to 300 people plus staff, not that they have those kinds of numbers. The only hitch is, they have to turn in all their weapons on the way in. They can get them when they leave. Julius is the first to hand over his rifle, but they all do. Scarlett keeps one baby knife hidden up her sleeve, God bless the well prepared. The place is nicer than he said, lots of lights, water, food, beef jerky, games, television and Blu-ray players for entertainment. Again, the dudes and Doc love it, but Scarlett is suspicious. 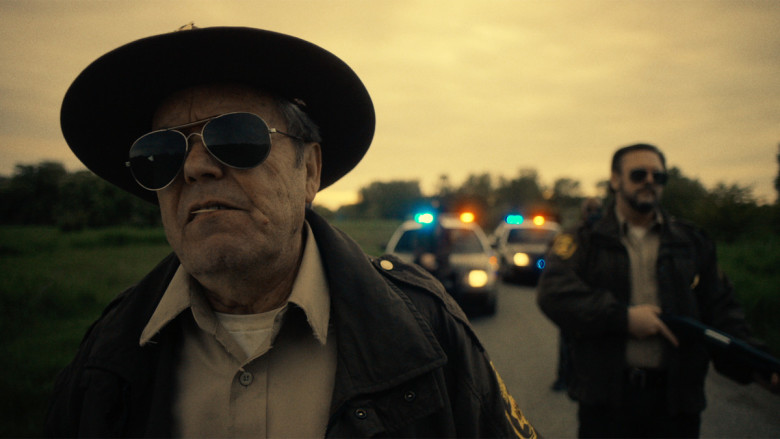 The fortress has a huge armory of weapons, when Axel asks if they can have some ammo, Walt answers firm; not a single round. They can stay as long as they want, eat what they want, but they don’t get to walk out with any other armaments than those they had on arrival. This all seems fair enough.

Meanwhile, Phil and Lucky continue to track Mohamad and Sam. Phil hasn’t given up hope of saving his old friend, then he comes upon another group in need. A string of people, some he knows from the triage center and Callie he knows from before. Scab, Dmitri, and the creepy vampire coven, The Sisterhood, are using this group for food as they hunt Scarlett. They feed on one of the bigger guys as Lucky and Phil watch from the trees. Phil gives up his search for Mohamad to try and save these people. 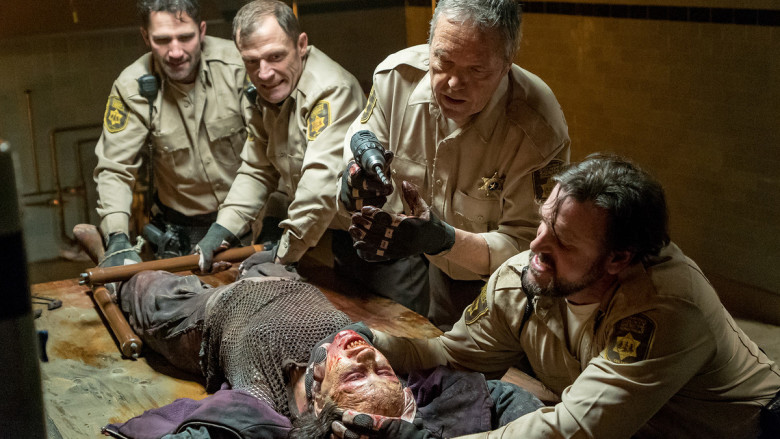 Dmitri calls a break in the night, for the sake of his human livestock. Scab doesn’t respect the call, but he doesn’t have the biggest teeth in the group. Phil and Lucky sneak in and release as many people as possible until Scab discovers them. He starts to chase, but Dmitri reminds him Scarlett is the priority. Phil and Lucky did pretty well on their bold endeavor.

Back at the fortress, Axel gets a hot shower and realizes he has a crush on abrasive Scarlett. She still wants to leave ASAP and Axel agrees, but first he wants to eat and raid their Armory. That’s a decision even she can respect. Julius loves the beef jerky but big mama is ready for the main bar-b-cue. She sends Walt and Axel to the cellar to bring up some meat. Scarlett volunteers to go along. Yes, this is when things go off the rails.

Walt’s team converted the entire basement to smokers and grills. They keep the meat chained up in a storage room, ferals. They’ve been cooking up vamps for years. Walt says they’re delicious, better than chicken. They even built UV slow roasters for the best result. They shock the feral into submission, nail it to the prep table, and drill a hole through the frontal lobe. That’s the messy part. Now Axel is ready to leave. 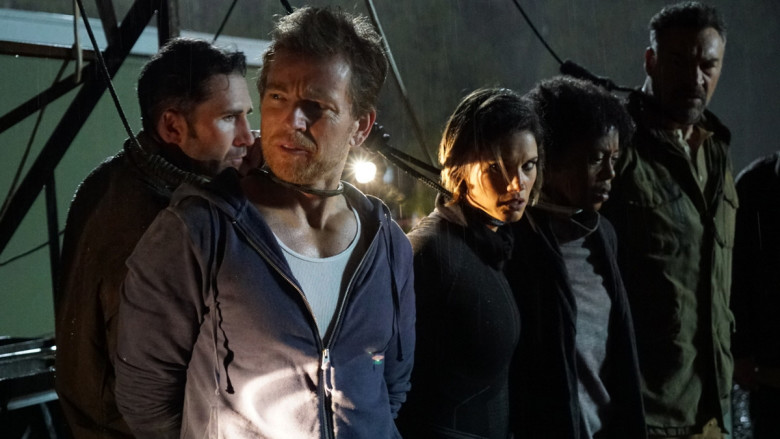 Axel and Scarlett tell Doc and Julius to meet them at Wanda in a few minutes. They explain the weird cannibalism and head to the armory for a quick raid. Doc grabs a couple rolls of TP on her way out. That’s what I’d do. Julius goes to the cellar to put the slow roast out of its misery. When Big Mama discovers Julius ruined her meat, she attacks with a skillet, but he kills her with a knife. Doc is the first to Wanda, Axel and Scarlett make it no problem, but Julius arrives with the law on his heels.

Sheriff Walt wants to know which one killed Big Mama and why. He isn’t going to like the answer. He brings them back in for some torture and start by shooting Axel’s knee. Julius explains he couldn’t stand to see the vampire suffer because he was a vampire too. Doc and Axel add their names to the prior vampire list. Walt moves them to the roof to hang them, Salem style, but The Sisterhood arrives before he gets the job done. Scarlett warns him to cut them loose and not mess with The Sisterhood but Walt won’t pass up a chance at more meat. He leaves Deputy Dan to watch Team Scarlett while he heads down into a Sisterhood ambush.