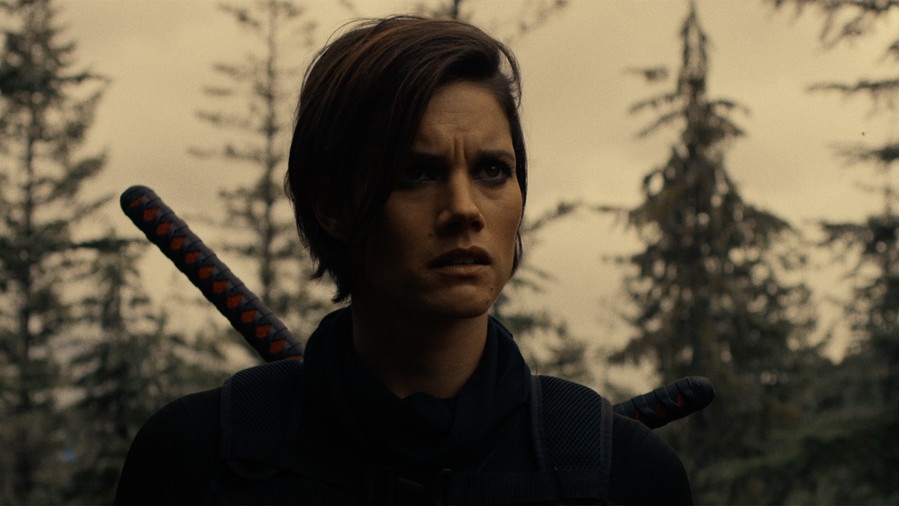 Team Van Helsing faces new challenges when Scar arrives with a whole new kind of feral at “Crooked Falls.” We lose a few more series regulars this evening, pay off a gag that started at the beginning of the season, and open a whole new plot for the vampire slayers. Season two began with a hopeful couple releasing red balloons with messages and maps tied to them. They offered sanctuary from vampires above the ashy clouds. The Crooked Falls compound is fairly safe from vamps during the day, but still needs security measures from ferals at night.

Scarlett wakes after a nasty nightmare sent to her by the elder. He has the power to reach out to the Van Helsing family, manipulate, and communicate to them through their dreams. Elder led Van Helsing to the farm and he wants Scarlett to set him free. I always assumed that Dmitri and the elder were part of the same game plan but that might not be the case. Crooked Falls is led and managed by a tier one alpha most refer to as, Boss. She manages all aspects of the complex and makes her security patrols alone. Boss does not seem like the same woman that released the balloons at the beginning of the season. 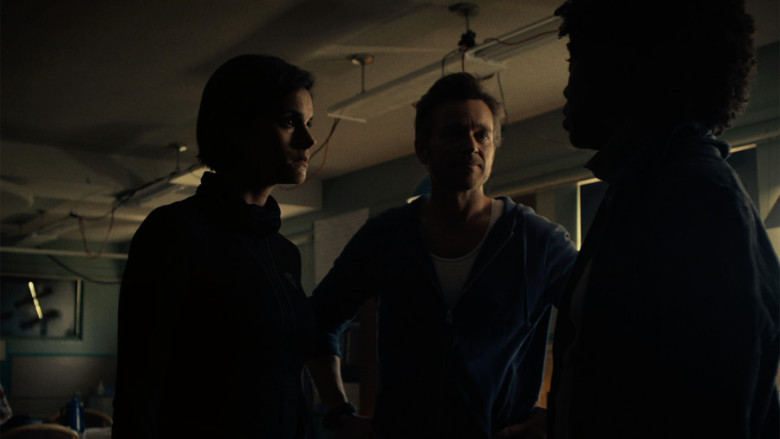 Axel and Scarlett haven’t given up on Doc and Julius but Boss searches for them solo. She finds Doc hiding in a SUV and saves her form a feral. Boss judges Doc as a survival novice and can’t figure out how she lasted this long without being bitten. On their way back to Crooked Falls, they discover a body mauled by ferals, and bait for a trap that almost kills Doc. Boss has never seen ferals set traps before. Nasty as they are, a trap is a form of advanced planning, more civilized activity than wild.

Scarlett is happy to see Doc but disappointed when she hears she doesn’t have the key, it’s with Dmitri now. Axel wants to know where Julius is. When Doc explains Dmitri killed him, Axel assumes Doc abandoned Julius to die. Doc is sick of Axel’s judgment but both of their positions are understandable. Axel hears the sound of gunfire by the security gate; Team Phil is on their way up with a group of ferals close behind. Axel rushes to their aid and arrives in time to help Phil, Lucky, Callie, and Jolene into the compound, but unpleasant Dennis chases out after his dog. The one nice thing he does. 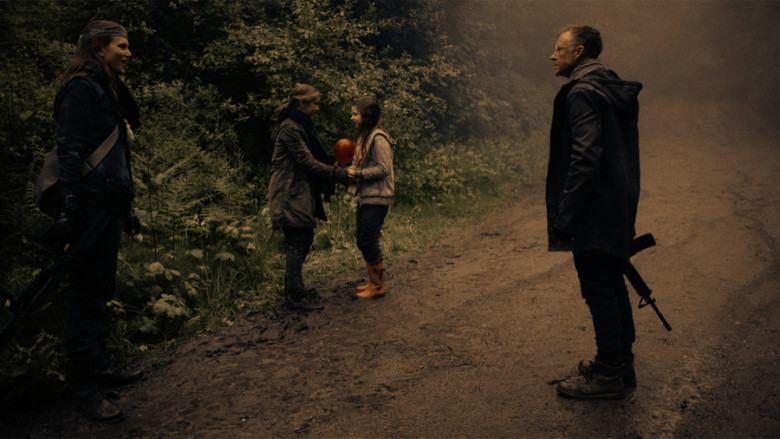 Scar and some other ferals trap and turn Dennis. Weird they don’t rip him apart like ferals usually would. His friends don’t want to kill him, but Scarlett isn’t emotionally invested, she pops him with a headshot. Boss grabs Dennis’ body to do some lab work on. She fights, she kills, and then she returns to science. Boss is full of surprises. Phil updates Scarlett, he’s lost his vision connection with Van too. Phil notices a maternal side to Lucky when she deals with Callie, but she gets emotional when he brings it up. They’ve been fighting side by side for a while and growing more intimate, but they still don’t know much about each other pre-rising. Later, Lucky tells Phil she thinks she’s pregnant. He doesn’t know how to respond but his response sets her off. Lucky says she’ll get rid of it. This is a sweet little plot point for these two. Phil’s been the moral voice for two seasons and Lucky is a great match. I feel like we’re scratching at the surface of something great with their relationship.

Lonely Jolene doesn’t waste any time cuddling up to Doc, which is perfect timing, Doc deserves a little kindness. Doc hints at something we’re all thinking about; there’s something deep and sinister about Callie. She keeps surviving while all the adults around her die. Doc knows it. Callie says she has skills; she isn’t the little girl everyone sees. I’m sure she’s hiding something, and I’m positive she’s no regular little girl. Boss invites Doc to check out samples of Dennis under the microscope. His cells, mutate, repair, and even regenerate at an alarming rate. Boss concludes these new ferals benefit from more engineering than natural mutation. Doc offers her own blood for testing too, Boss may be able to isolate the Van Helsing signature. 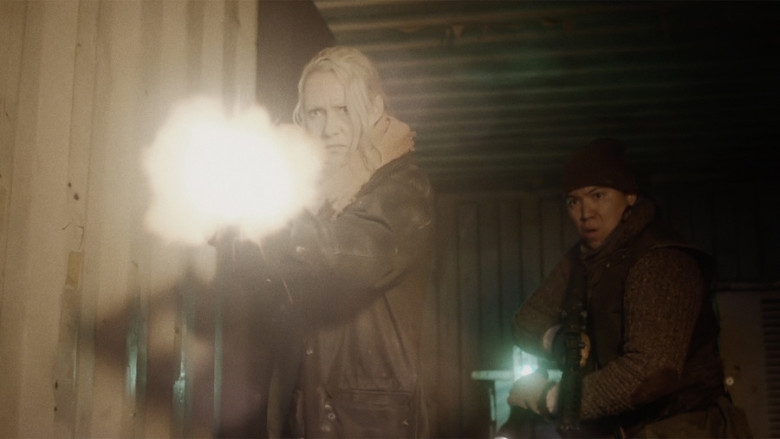 Scar and his ferals knock out the power to the complex. Axel and Scarlett create a distraction while Boss leads a team to restore power. Again, the ferals aren’t tricked by Axel’s distraction, they learn fast. Boss gets power back to the complex and their security gate but their safety is declining fast. Meanwhile, Dennis wakes up and unzips himself from his own body bag. Jessie freaks out when she see him wandering the halls. Feral Dennis is much less an A-hole than human Dennis, he walks right outside peacefully. These new ferals are an interesting bunch. they have a lot of questions about themselves.

Phil and Lucky follow Dennis outside to kill him a few more times, this time, Scar’s team surrounds them. They want to know how and why they are immune. As evidence, Scar has Julius, weak, but alive. Phil and lucky fight the group as best they can but Lucky gets bitten. Scar tells the others to back off to see if Lucky turns. The brief pause gives Phil a chance to tell Lucky he loves her. When Scar is satisfied she isn’t changing, he lets the others attack to feed but Phil has a hidden live grenade. He blows them all up. I love they brought Julius back, but I’m bummed Phil and Lucky are gone. They were a bright spot in that crazy world. 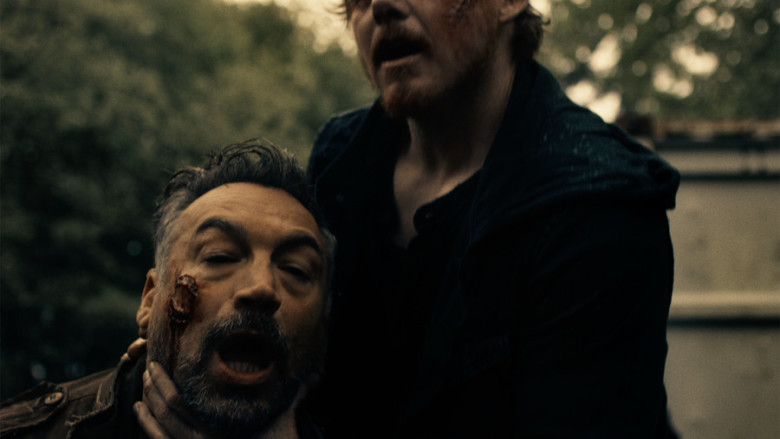 Axel gets Julius out of the courtyard. Julius confess Dmitri took the key from him, but he also sets Axel straight about Doc. Julius knows she tried to save his life. Boss overhears Julius and Scarlett talk about the key, she also knows all about it. The next morning, Boss takes Scarlett up the mountain. She says she knows where the elder is hidden and how to use the key, even though they don’t have it at this point. Boss claims she was the woman who told Scarlett and Van about the key in the first place. Would that make this woman their mother? Doubtful, she’d just announce herself as Scarlett’s mama.

Back at Crooked Falls, skillful Callie fixes their radio and makes contact with someone outside; she sends coordinates to the stronghold’s location. A moment later, Axel hears the sound of helicopters on their way up the mountain. This second season was a great improvement over the first, look for a strong finale next week.