VEEP continues to impress with a very funny episode that finally Amy rejoining Team Meyer. She’s left behind her hapless fiance to work on Selina’s presidential library and this episode showed why she’s been missed. She’s a voice of reason that Selina so desperately needs, even if she doesn’t necessarily want to listen to her. Ben’s held this role before, but he’s firmly ensconced in Jonah world, which goes even further off the rails this week, although Congressman Ryan once again seems to have failed upwards.

Selina attends the funeral of a Supreme Court justice, where she delivers this amazing soundbite to a reporter about the deceased–“He was a friend to all people, especially corporations, who he legally considered to be people.” Six seasons in and Veep is still capable of delivering biting political satire in throwaway one liners. That should be the end of her interaction with the press, but Mike jumps in to deny rumors that Selina’s being considered for the open Supreme Court seat. He habitually denies everything these days, but of course this jumpstarts a rumor that Team Meyer’s actions accidentally accelerate. The show has also done a great job satirizing cable news shows–Jane plugs a segment with the following: “Reading? Could it be made for your child’s self esteem?” There’s a funny running sight gag involving the ridiculous amounts of bronzer the makeup lady uses on Dan. Dan helps kick the Supreme Court rumors into overdrive by addressing it on the show, encouraged by the fact that Selina’s name was on the callsheet for a Senator on the judiciary committee (she was trying to get him to ally with Sherman Tanz, who we finally meet this week, to insure that he’d donate $5 million to her library) and Richard telling him that Selina is in a closed door meeting. But “closed door meeting” is really code for “Selina is in the hospital”.

Selina has a minor heart attack this week. In typical Selina fashion, she’s more excited to learn that her hot flashes and chest pains weren’t related to menopause (Selina hates women, so she’d never want to be slowed down by something that like, but Selina seems to hate everyone, except, inexplicably, Richard), then she is worried about this news. However, Gary is so worried that he too has a heart attack directly after hearing the doctor–his rival from the season five premiere–tell her what happened. The scene is framed hilariously. Selina is celebrating in the foreground, while Gary clutches his chest and drops out of view, partially obscured by a door frame. 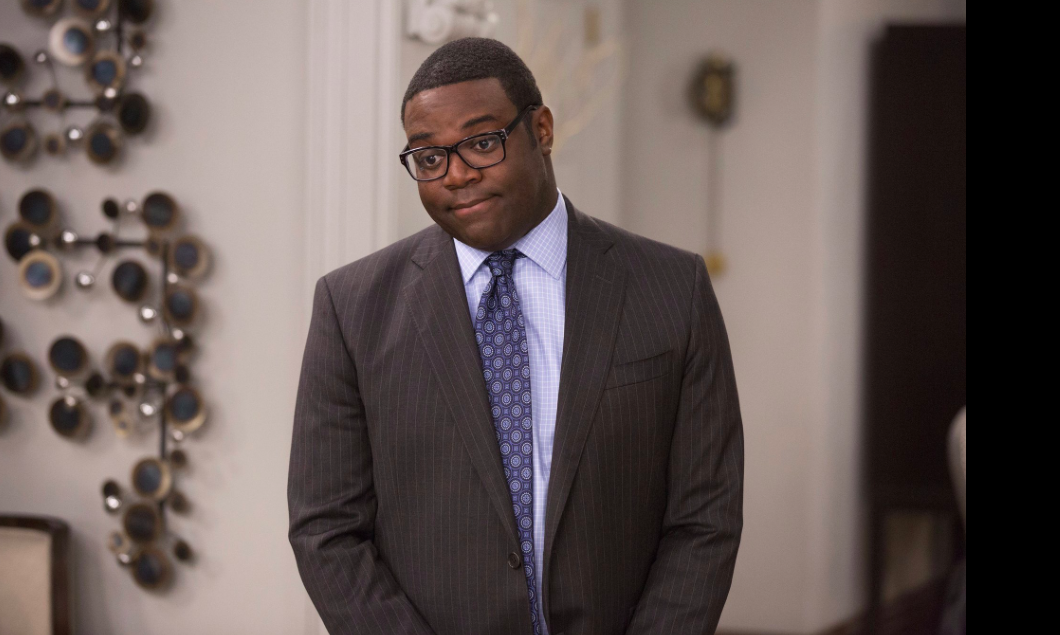 Selina may not respect Gary, but she does actually care about him. She’s floundering a bit trying to navigate post White House life, but she doesn’t know what she’d do without him. She waits by his hospital bed until he wakes up–partially because she doesn’t know her phone password, but partially because she wants to see that he’s okay. She tries to brighten his spirits by telling him how much he has to live for. He’ll get to buy her book (no free copies) and he has a birthday coming up. Selina’s grasping at straws here–everyone has a birthday every year–but Gary thinks she’s remembered that next year is his 40th.

After learning how hilariously tragic Gary’s life is–he’s a 39-year-old man living with three roommates in Hoboken who wakes up at 4 am to be at Selina’s at 6 am–Katherine invites him to stay in the brownstone until he recovers. Selina acquiesces, as long as he stays in the basement. She goes down there to visit him, bringing a plate of food she made just for him–pasta mixed with a cut up leftover chicken sandwich, bun still on. He oohs and awws over it like a proud parent and the two end up falling asleep in the same bed. Gary wakes up first, putting his arm around her, but she extracts herself as soon as she can. Gary and Selina’s relationship is so twisted and co-dependent, but it’s also what brings out her most human side, even if only for short periods of time. Amy tells Selina that Montez is ready to announce her pick. Selina gets a call from the White House and quickly learns that it’s not her. She had brushed aside the plan to get Tanz to donate the $5 million for the library when she thought she was going to be nominated, but now she needs that money more than ever. But Tanz can no longer donate the whole sum. He’s putting his money towards helping Jonah. Jonah insulted him by showing up an hour late to their original meeting–he forgot about Daylight Saving Time–but then impressed him by giving a truly unhinged speech to a reporter about how the government needs to stop babysitting people with nonsense like forced time changes.

Tanz sees in Jonah a brash voice willing to flaunt conventions. He’s got himself the perfect puppet, as Jonah doesn’t even read the bill Tanz had his people draw up repealing Daylight Saving Time and has no qualms about shoehorning in a reference to private prisons in his speech introducing the bill on the House floor. Whenever Selina is down, Jonah miraculously rises up. At this rate, he’ll be president one day. This episode doesn’t really give any hints as to what Selina’s story arc for the season going forward will be, but it demonstrates that Veep still has some of the talented, funny actors and writers in TV.