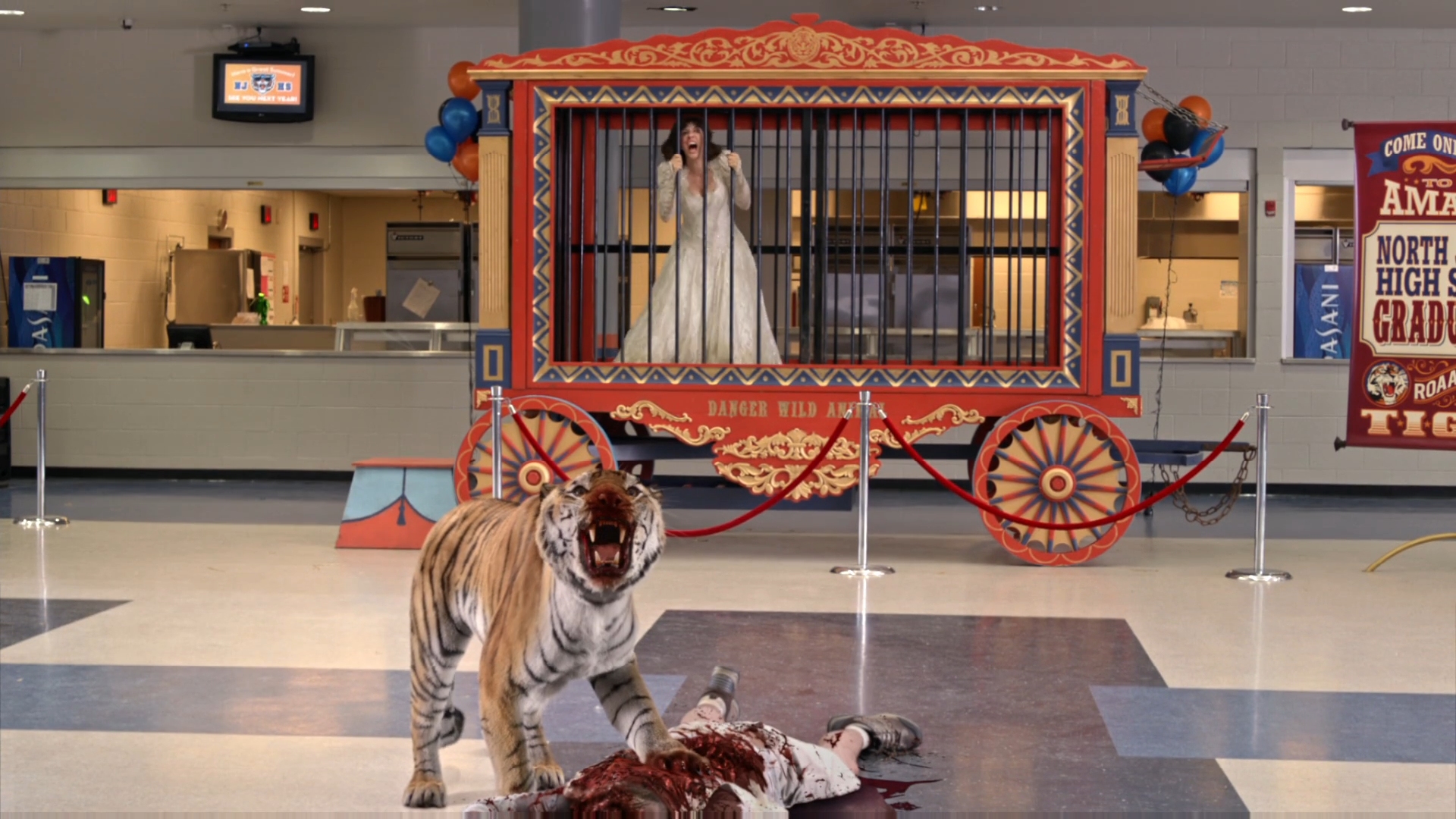 The best series finale I’ve ever seen for a comedy was undoubtedly Eastbound & Down’s. But man, this came very close. I would like to begin this review by letting everyone know that I was right. The villain behind it all was not Lee Russell, but actually Ms. Abbott, and boy, is Abbott an amazing villain. The series did a really good job of laying down the track towards this episode. At times, the series staggered or lulled. Some people even gave up on the show because it felt like repeated beats in the middle, and I will say, for being pitched, sold and delivered as a miniseries, there really should’ve been something more in the second season. The first season, much like Eastbound & Down’s first season, felt extremely thought out and preplanned. But the second season, outside of the first few episodes, was more freeform. Regardless, the finale made up for a lot of the mediocrity felt throughout this season. 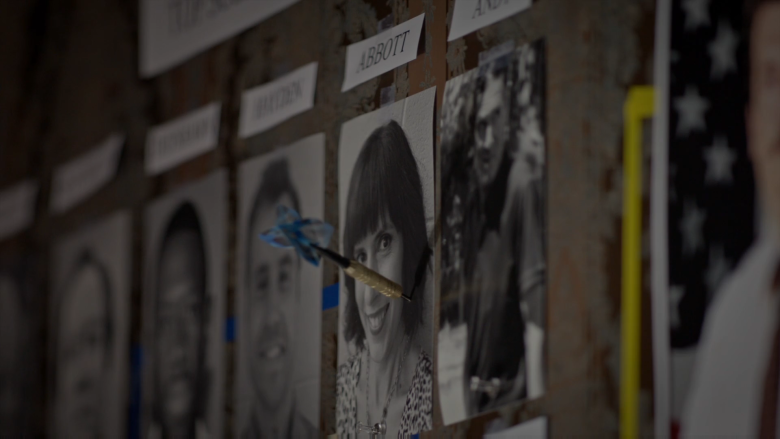 We begin where we left off: Neal Gamby is the interim principal, and he’s trying his best to keep order after the forced resignation of his friend (and surmised shooter) Lee Russell. Russell on the other hand is determined to clear his name. As he says himself in a bizarre confrontation with Belinda Brown, “All I have is my word, and you know my word doesn’t mean shit.” It’s true. Everything we’ve seen from Russell’s past has led us to this moment: him having to defend himself while everyone knows he’s nothing but a liar and a manipulator. It doesn’t take Russell long to realize that Abbott was the one behind it for all the reasons I discussed last week. She’s unstable, jealous, crazy, ruthless, and willing to kill people – not to mention, she was the last person seen near Russell’s car.

By the time Russell arrives at Gamby’s house it’s too late. Standing there in a wedding dress is Ms. Abbott, gun behind her back ready to kill Gamby. Instead, in a moment of frustration, she shoots Russell, presumably to his death. But this unceremonious end is not how Russell will go out. After Gamby persuades Abbott towards a trap that he accidentally falls into, she bitterly laughs and swears to kill the next object of her disaffection, Amanda Snodgrass. Gamby fears for his girlfriend’s life, but stuck in the hole in the ground that was intended for his shooter is not only demoralizing, it’s impossible to get out of alone. Luckily for Gamby, Russell is alive, the bullet just grazing his forehead. The two of them, after apologizing to each other, join forces one last time. 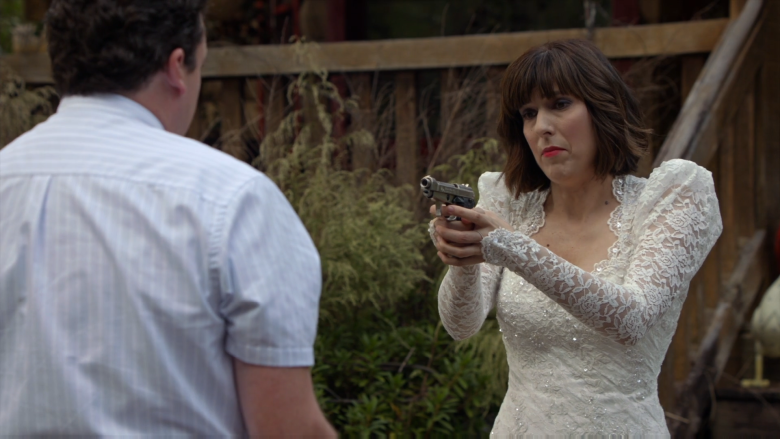 By the time they reach the school, Abbott is well into sticking Snodgrass’ head in the toilet and trying to kill her with a handicapped parking sign. After that backfires, Abbott pulls out her wild card: it turns out that Lee Russell paid $25,000 of school budget money to have a real-life tiger at North Jackson’s graduation. Abbott decides to let that tiger loose. Immediately, the tiger kills its dickish handler and then prowls the lunchroom as Snodgrass cleverly locks Abbott in the tiger’s cage. To Neal, Russell, Snodgrass, and Dayshawn the image is striking. As they hide behind the lunchroom lockup screen, they see Abbott, dressed in white, screaming in unison with the tiger Lee Russell forced upon the school. It’s easy to say his rebranding effort did not work.

After some clever maneuvering, Abbott manages to pull the fire alarm as the students, parents and teachers are being escorted out of the school. The alarm overrides the lockdown to the lunchroom, effectively setting the tiger loose. In a moment of amazing stupidity, Lee Russell tries to connect with the tiger he always thought he was: prideful, strong, Asiatic. Naturally though, this is a damn tiger, and so when Lee Russell reaches out to pet it, it bites his fingers off. When Gamby finds Russell, he’s bleeding out on the floor. In a truly emotional scene, the two of them come to terms with each other, and thank the other one for making this the best year of their respective lives. Russell even gets Gamby to admit that he loves Russell. As the tiger approaches, Gamby decides to be the man he always wanted to be. He stands up to the tiger and roars back, intimidating the animal enough to give him the time to carry Lee Russell to safety. 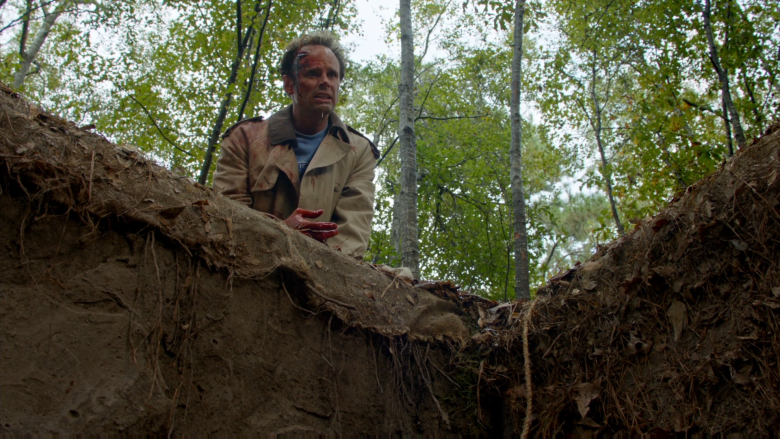 As the police swarm in to subdue the situation and make the proper arrests, Abbott puts on a devilish grin looking at the chaos she’s created. Again, she really is an amazing villain. Gamby is the hero, comforting his girlfriend, protecting the students, faculty, and parents from Abbott’s threats. He’s finally the principal he always thought he was. But in this moment, none of that matters to him. All he cares about, all his eyes are fixated on, is Russell – being loaded into the back of an ambulance. After all this, he only cares for his friend.

Three months later and Gamby drops his child off for her first day at North Jackson High. Thing is, he’s not the principal of North Jackson High (and their new mascot – the Shamrocks) – that honor would go to Nash. He’s the principal of a nearby Middle School, and enjoying his position away from the place that made him – and almost broke him. Lee Russell is a manager of a boutique store in a mall, a job that could not be a better fit for him. And Snodgrass, still a teacher, reads her new book out loud to a small audience of eager listeners. The Union of The Wizard and The Warrior. The Wizard, evil, ruling over naught the kingdom he sought, but the kingdom he deserves. And the Warrior, a beacon of justice, protecting the youth until they’re ready to brave the dangers of the next world. 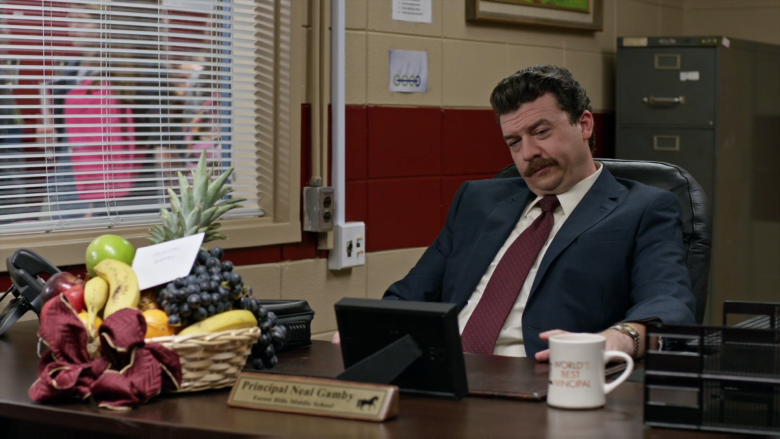 As Snodgrass recaps the reading to Gamby in a food court, his eyes happen to catch Lee Russell’s a few tables away. The two of them smile, make faces, and leave each other in peace. Maybe one day the Wizard & the Warrior will ride again, but today is not that day.