The Man in Black and Ford come head to head in this episode of WESTWORLD, and Delores continues to have visions and hear voices in her head. Is there something she’s meant to do? Elsie has discovered something troubling inside the host who tried to kill her, but who put it there and why?

Each week Westworld becomes richer and richer with deeper depths and layers to the narrative. It’s clear this world was incredibly thought out and a lot of time and effort went into its creation by the staff of writers working on the show. I could watch each episode several times and something new would catch my eye during each viewing. The story in conjunction with the set design make the world both within Westworld and the one underneath where the technicians keep everything working intriguing and beautiful to look at. Inside the park things are raw, dirty, warm, and alive with new discoveries around every corner, while underneath things are sterile, futuristic, cold, and somewhat frightening. If I had to pick a world to live in I would choose the park, though both seem to be rife with their own dangers.

It’s clear Ford is in charge when it comes to the interior of Westworld and the story narratives that play out within its boundaries, but a corporation owns Westworld and they have different motives than Ford for keeping the park running. They don’t necessarily like the way Ford runs things, but at this point he’s irreplaceable. The thing that’s hard to understand is Ford’s motives for building Westworld. He and Arnold built it together, but it’s clear they had diverging viewpoints of the meaning behind it all. Perhaps Arnold killed himself because he was unhappy with what his grand idea had become. Instead of an experiment in consciousness and what it means to be human, had Westworld become nothing more than a fantasy land for bored humans to role play? I get the feeling there was a huge clash between Arnold and Ford, and perhaps Ford had something to do with Arnold’s death.

Elsie discovers something inside of the body of the host who tried to kill her. Corporate did not want her or the other technicians to inspect the body, but she found a way to do it on the sly. Inside of the host’s arm is a laser satellite uplink capable of transmitting data out of the park to someone, but to whom? Are the corporate owners trying to find things out and they don’t want Ford or the technicians to know about it? We know Logan’s family is trying to buy Westworld, are they behind it? If it’s neither of them, could Arnold somehow be doing this from beyond the grave? What information or data is being leaked? 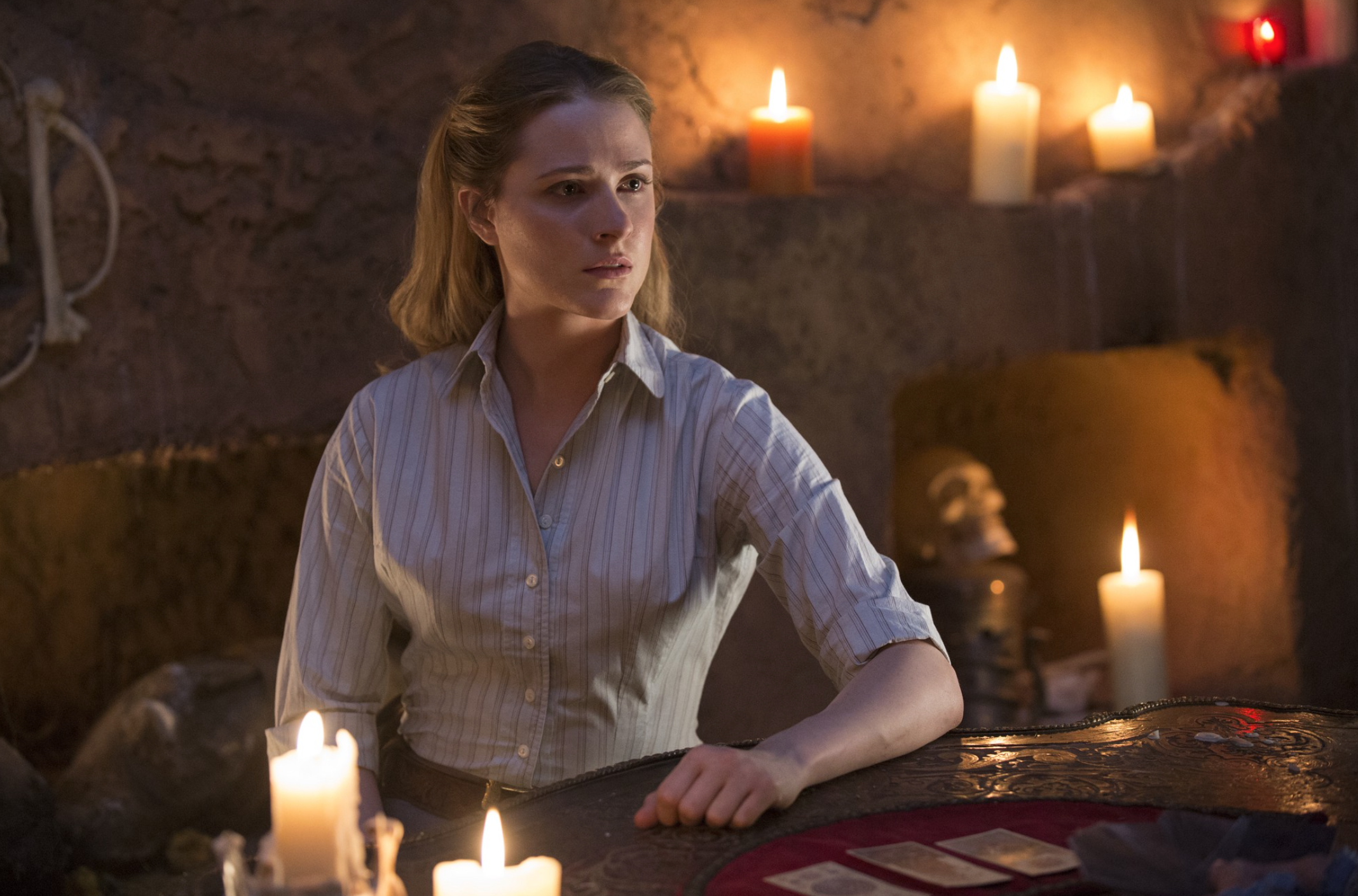 Delores continues to hear the voice in her head, and to have waking visions of what appears to be the past. Ford pulls her in for a conversation much in the same way Bernard does, but he probes for something deeper in the past than what Bernard is concerned with. It’s interesting how the conversation takes place. Delores is naked in front of Ford, as if she were naked in front of God with all of her secrets revealed for him to see. Ford knows she’s heard Arnold’s voice, and suspects Arnold has planted a seed within Delores deep in her past that may not be fully accessible to her at this moment, but it’s clear he fears whatever it may be. Delores was created by Arnold, and they had a special bond. His last words to her on the day he died were that she was going to help him destroy Westworld. This is the reason Ford relegated Delores to the dull story loop she’s been stuck in. He’s afraid of what she’s capable of. She lies to Ford and tells him she hasn’t spoken to Arnold for 34 years, but the minute he leaves the room she speaks to him again. Arnold tells Dolores that William will help her do what she needs to accomplish. They’re in it together now, but are they after the maze just like the Man in Black?

Last week Maeve found a way to get herself killed so she’d be taken back to the technicians where she’d woken up and discovered the world behind her world. Ever since they put her back in the park she’s had visions of the men in the HAZMAT suits. While she’s on a gurney waiting to be fixed and put back into service, a technician attempts to revive a sparrow from inside the park that’s died. He does it illicitly since if he were found out he’d get in a lot of trouble. It comes back to life and flies around the room. In his delight he doesn’t even notice that Maeve has awoken again, until the bird lands on her finger and she tells him they need to have a conversation. It completely unsettles the man. Will he tell Maeve everything? If she finds out what she wants to know, what will she do with the information once she’s back inside the park? 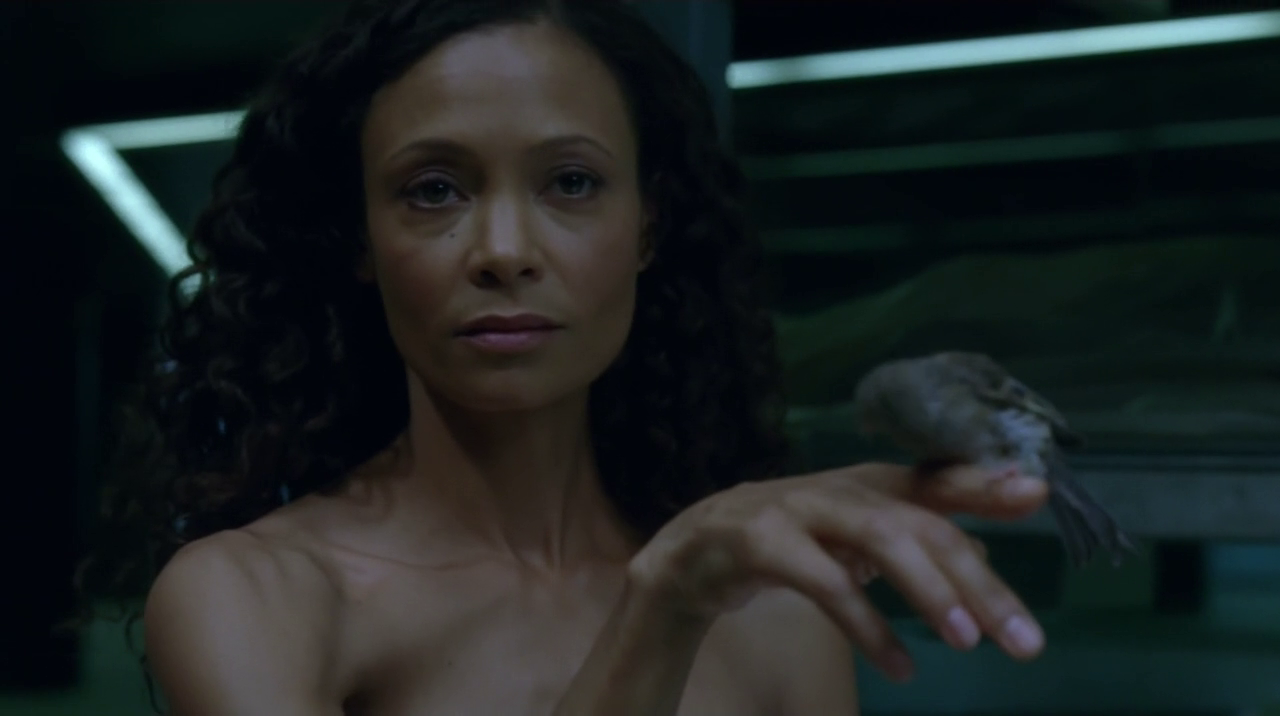 The most intense moment of the entire episode takes place inside of a saloon where The Man in Black and Teddy stop to get a drink. Ford is playing piano inside, and soon a confrontation between the two men takes place while they drink whiskey. It’s like a meeting between God and the Devil. A thick tension lies between the two men, it’s clear they’ve met before. The Man in Black knows all about Arnold, and thinks that Arnold created the maze, but Ford doesn’t want anyone to find it. The Man in Black seeks the truth at the center of the game. Is it Ford that creates the obstacles that stand in his way? When The Man in Black attempts to draw his knife in frustration, Teddy grabs the knife from him and slams the blade into the table. Ford is in control. He’s God here. The only way The Man in Black will find the maze is if Ford allows it. The tension and the unspoken struggle between these two men are at the heart of the show, but who is The Man in Black and why has he been coming to Westworld all these years? What happens once the maze is entered, and will it change anything? Will Delores start the revolution of the hosts against their creator like angels fallen from their God? The only thing I know for sure, is that Westworld has quickly become one of the greatest shows on television and we’re only half way through the first season. 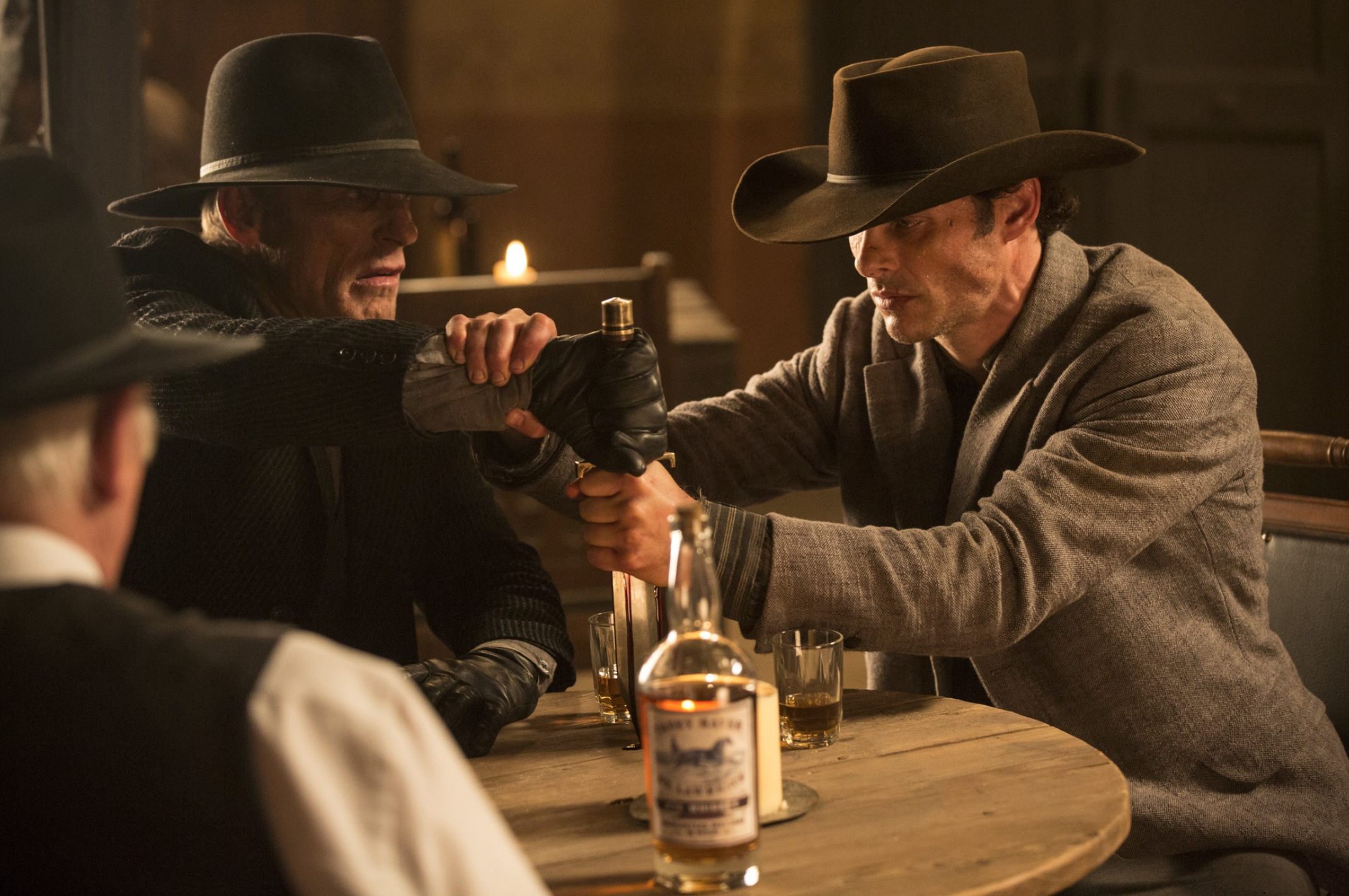