The premiere of WESTWORLD was a stunning visual and narrative feat, setting the stage for an intriguing series. The show explores what makes us human through the lens of artificial intelligence gaining consciousness for the first time. It also shows us mankind at its basest animal form when allowed to run wild without consequences. Without a doubt this is going to be one of the most talked about shows of the season.

If you enjoy science fiction of any variety, than you are going to fall in love with Westworld right away. The show is loosely based on the Michael Crichton novel of the same name, and was written and developed for television by Jonathan Nolan and Lisa Joy. J.J. Abrams is executive producing the show through his company Bad Robot for HBO. Westworld is a simulation, or game where humans go to live out their fantasies with the aid of artificially intelligent “hosts” who are there to give the human visitors anything they want. If you want to be a hero and save the day, or have sex with someone without consequence, or just want to soak in the experiences of western life in the 1800’s, it’s all available to explore. People come to live out and interact in one or several of the hundreds of stories playing out within the Westworld universe. Think of it as a video game you actually get to experience. The “hosts” are programmed to not be able to hurt any living thing, which is why when flies crawl on their faces from time to time, they do nothing to shoo them away. The visitors can sure as hell hurt the hosts though.

In one of the first scenes of new visitors arriving by train to Westworld a man explains to his travel companion that the first time he came to Westworld he brought his family and went “full white hat” while there. The next time he came alone, and for the next two weeks he went full on evil. It was the best two weeks of his life. There’s no morality, no right or wrong, no punishment for rape, murder, or destruction, anything goes in Westworld. Whether your fantasies are light and heroic, or dark and depraved, all are welcome as long as you’ve paid the entrance fee. 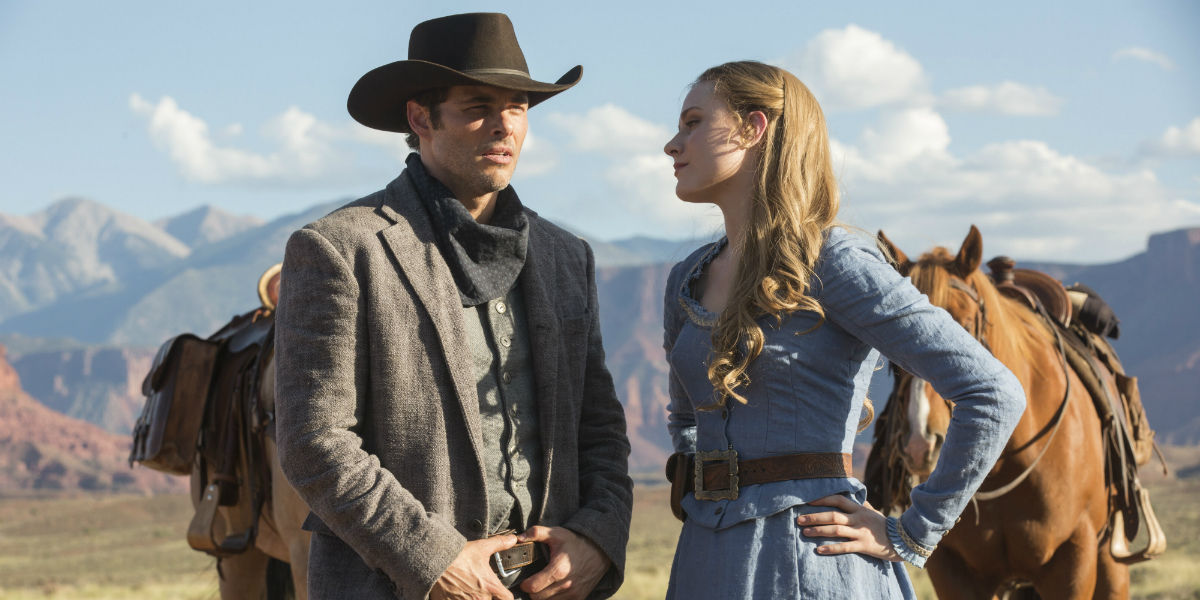 We first enter the world through the eyes of Teddy, who appears to be a visitor returning to Deloris, played by Evan Rachel Wood, after a long absence. Wood absolutely knocks it out of the park playing Deloris with all of the nuance and emotion of an artificially intelligent being who doesn’t realize they aren’t human. Once Teddy and Deloris reunite they head back to her farm to see her father, but something is wrong. They hear gunshots. A group of bandits have killed her mother and father, but Teddy shows up and shoots two of the bandits. It seems like he’s gotten the upper hand, until a third man appears. Ed Harris plays a mysterious gunslinger dressed all in black, and it’s only when Teddy tries to shoot the gunslinger and nothing happens, that we realize Teddy is a “host” as well. Teddy’s bullets can’t harm the gunslinger since he’s a visitor, but there’s something off about him. He knows Deloris, calls her by name, and tells her he’s been coming there for 30 years and she still doesn’t recognize him. The gunslinger kills Teddy, and drags Deloris off to rape and possibly kill her.

The West is a harsh place, but each morning Westworld resets itself like a strange version of Groundhog Day, and all of the “hosts” memories are wiped. There are myriad possibilities of how the day may play out, and no two seem to ever be exactly the same. We’re shown how this world resets through the eyes of Deloris, who is clearly our main character. Something has gone wrong with the reset though, and some of the “hosts” begin to act strangely. The creative director of Westworld is a man by the name of Dr. Robert Ford (played wonderfully by Anthony Hopkins) and he’s put an update through all of the “hosts” operating systems that allow them access to impressions of past memories before they’re overwritten. He calls it reveries, which allow the “hosts” more natural movement and gestures, but has some strange consequences. First a “host” playing the sheriff on a manhunt stops talking midsentence as if he’s having a seizure or stroke, then Deloris’s father finds a picture of a woman from the real world in the dirt of his farm and can’t let it go. It bothers him so much that he stares at it all night. When Deloris finds him in the morning he’s gone crazy and assures her he knows answers to questions he’s not supposed to know. He also remembers all of the harsh things people have done to her even though his memory is supposed to be wiped away.

Management of Westworld isn’t just providing a service for the rich, they have another agenda that’s not clear at this point, but feels sinister. When a “host” is retired, they’re brought to a storage facility underneath Westworld and put into deep freeze. There’s a whole army of “hosts” down there just waiting to be awoken. Is Ed Harris’s mysterious gunslinger the one who will awaken them? He’s there trying to figure out a secret about the place, and we see him torture a card dealer from the saloon trying to get answers about Westworld’s mysteries. We later see him carrying the top of the same man’s skull, but inside is a strange symbol. Is it a map or a clue? 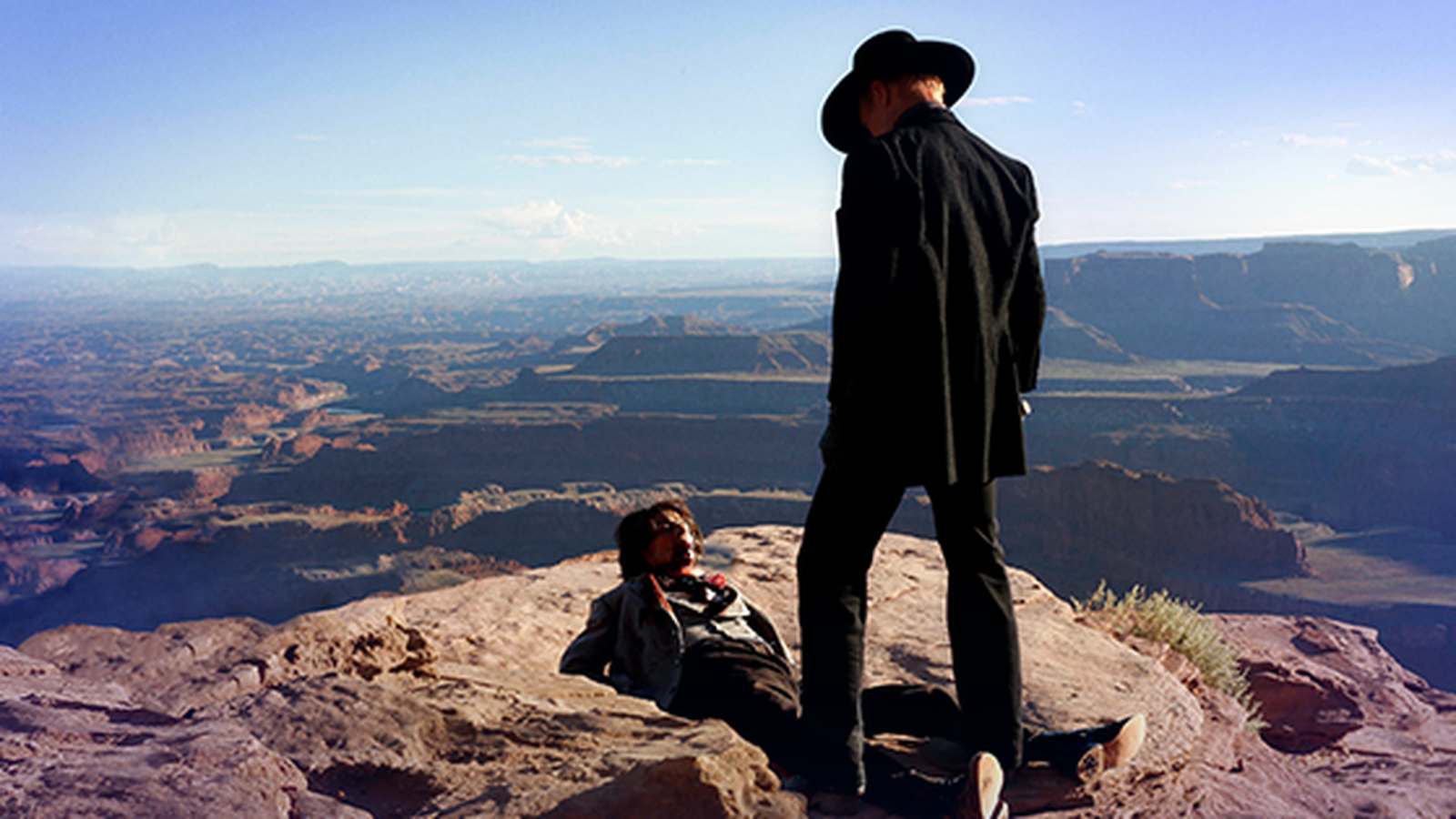 Dr. Ford and Bernard Lowe, the head of the Westworld programming division played by Jeffrey Wright, seem to fix and pull back the update which made the “hosts” act bizarrely, but is it too late? Deloris is returned to her role inside Westworld, but now her father has been replaced by another “host’ and she doesn’t seem to notice. She tells her programmers she will do no harm to any living thing, but we see her swat and kill a fly while standing on her porch. 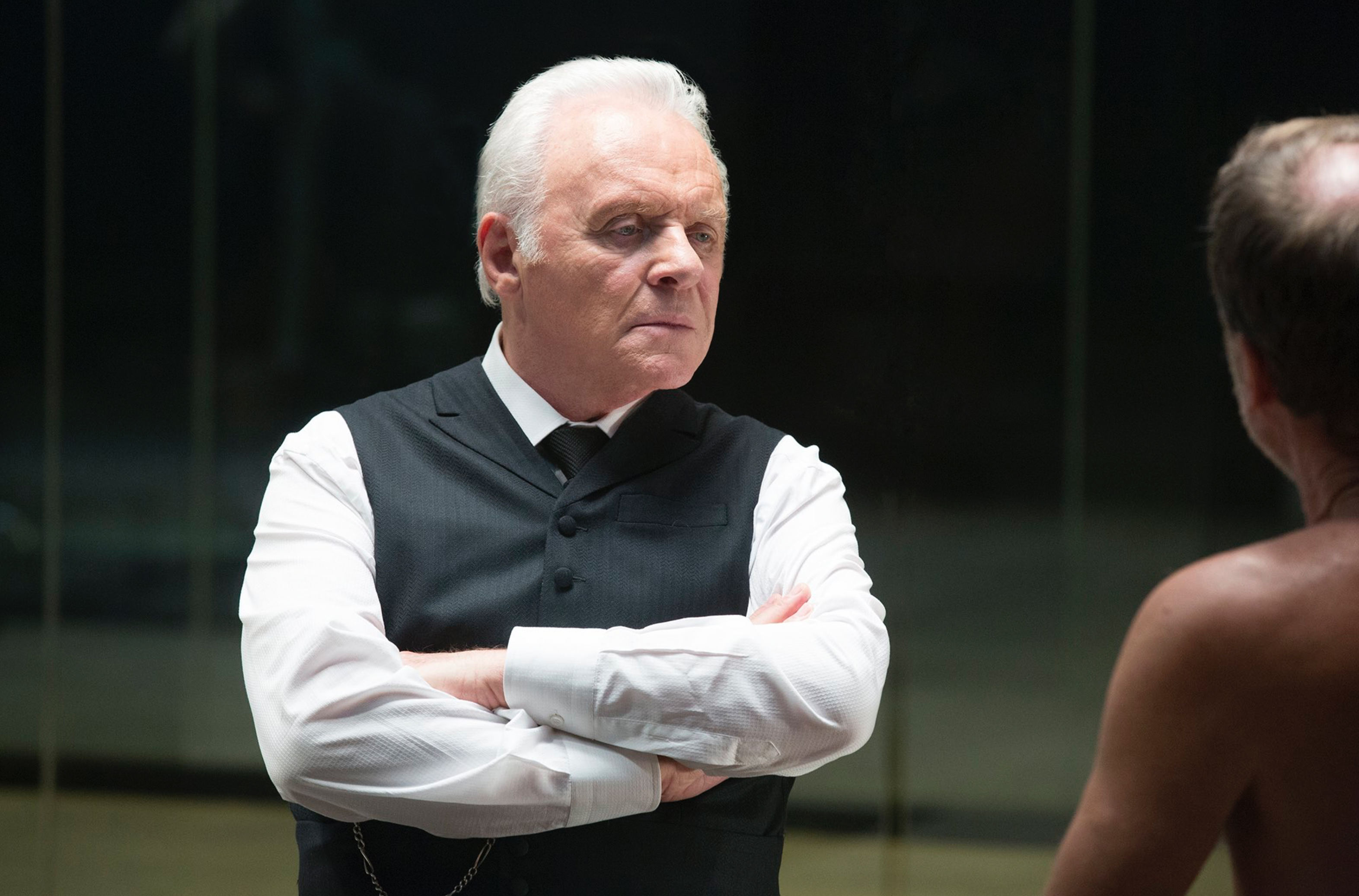 Viewing the pilot episode is like watching some of the best cinematic depictions of the American West ever to hit the screen. The cinematography is absolutely gorgeous, and the harsh differences between the cool, futuristic world of the managers and creators of Westworld, juxtaposed with the warm natural look of the west is a wonderful reminder of the artifice of this place. Jonathan Nolan directed the pilot, and it seems he’s just as talented a director as his brother. There’s some great use of music in the show as well. Two instances stand out in my mind; the first is a player piano playing a version of Black Hole Sun by Soundgarden, and the second is during a huge shoot out and massacre as an orchestrated version of Paint It Black by the Rolling Stones sets the mood perfectly. Westworld is television at its finest, and I cannot wait to see where they take us.