We delve into the history of WESTWORLD in the third episode, and learn who worked with Ford to create the park and its hosts. Ford’s partner is dead, but has he somehow programmed himself into the code that runs the hosts, or are outside forces altering the consciousness of the parks hosts? 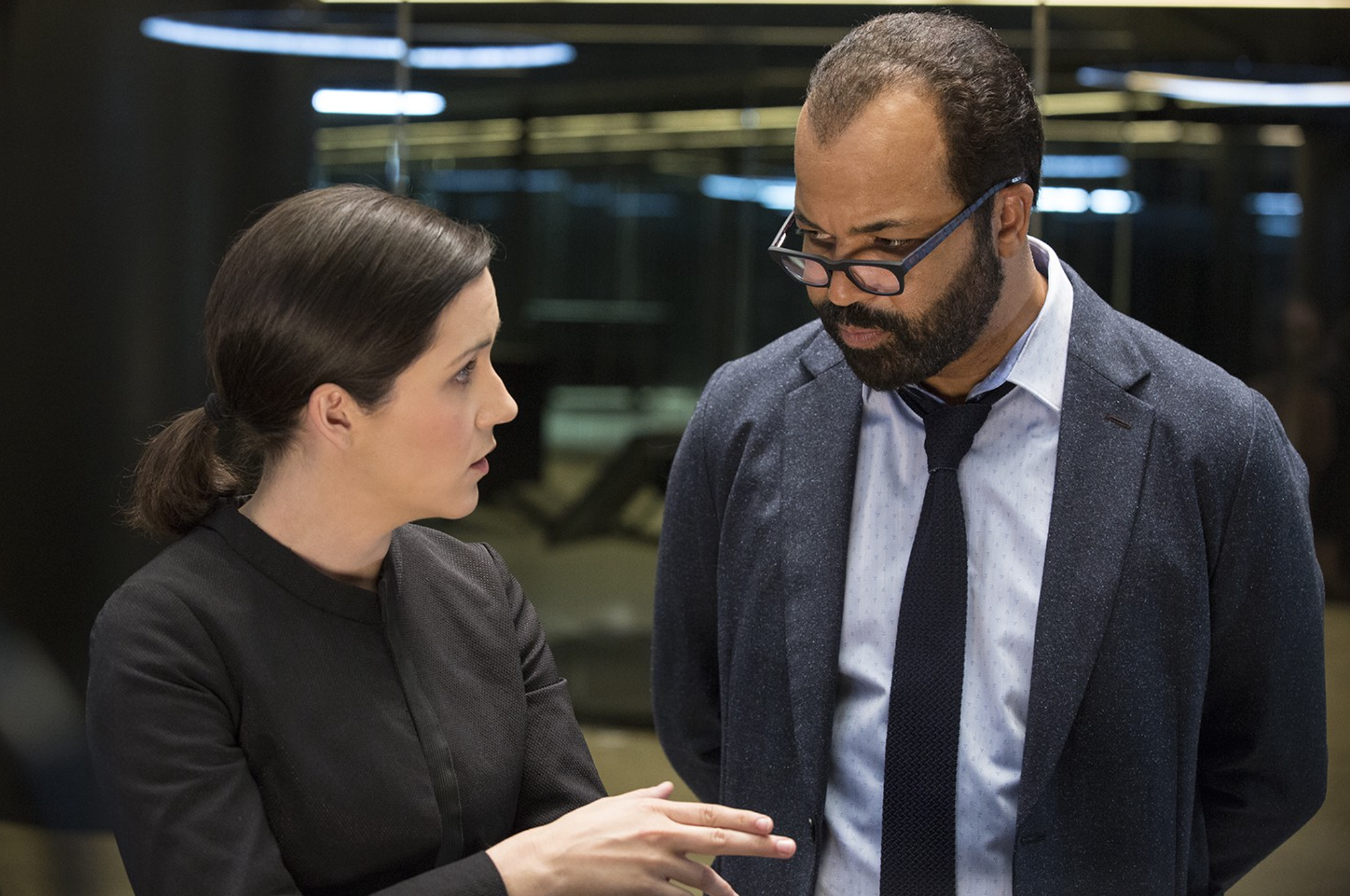 There’s something wrong with several of the hosts who seem to have malfunctioned, and Elsie has found a pattern that connects several of them. She’s troubled by the fact that in two of the instances hosts appeared to be holding conversations with an imaginary person named “Arnold”. The fact that both hosts talked to the same person who wasn’t there raised some red flags for her, as does the fact that one of the hosts goes on a rampage and kills six other hosts that in the past had killed him as part of their storylines. It appears the host was holding a grudge based on these past incidents for which he should have no memory of. Elsie brings this peculiarity up to Bernard, who takes the information to Ford.

Bernard has his own strange behavior with Delores to contend with. He’s fascinated by her and the way she thinks. The private conversations we’ve seen the two have are not meant for others to find out about. What is Bernard doing with Delores? Is she a surrogate for his own son that he mentions having read books to? He’s interested in the ways Delores has changed, and seems to push her to acknowledge the changes or at least inventory them for him to discuss with her later. He knows something is different about her consciousness, but wants to see how things play out with her as she evolves beyond her programming. Is Bernard responsible for these changes within her in any way, or is he just an intrigued observer?

When Bernard brings up Elsie’s findings about “Arnold” to Ford, he finds out things about Westworld he never knew before. It’s a tricky thing to fill in the back story of a show or character, and there are a lot of pitfalls that can make the sharing of this information clunky and awkward. Luckily Westworld doesn’t fall into these traps. When we learn about how the history of the park was scrubbed and the real story covered up, it seems organic and not forced. Maybe some of that has to do with the fact the information is delivered by Anthony Hopkins, or maybe it’s the delivery coupled with wonderful writing? Let’s just say it’s both. Hopkins is a perfect match for the God like sensibilities of Ford when it comes to the park and the hosts within it. When he tells about his former partner Arnold’s role in developing the hosts and their consciousness, he does it with authority and without any nonsense, which makes it completely believable. Arnold became too preoccupied with the hosts, and Ford makes it sound like he eventually took his own life before he could finish his work. 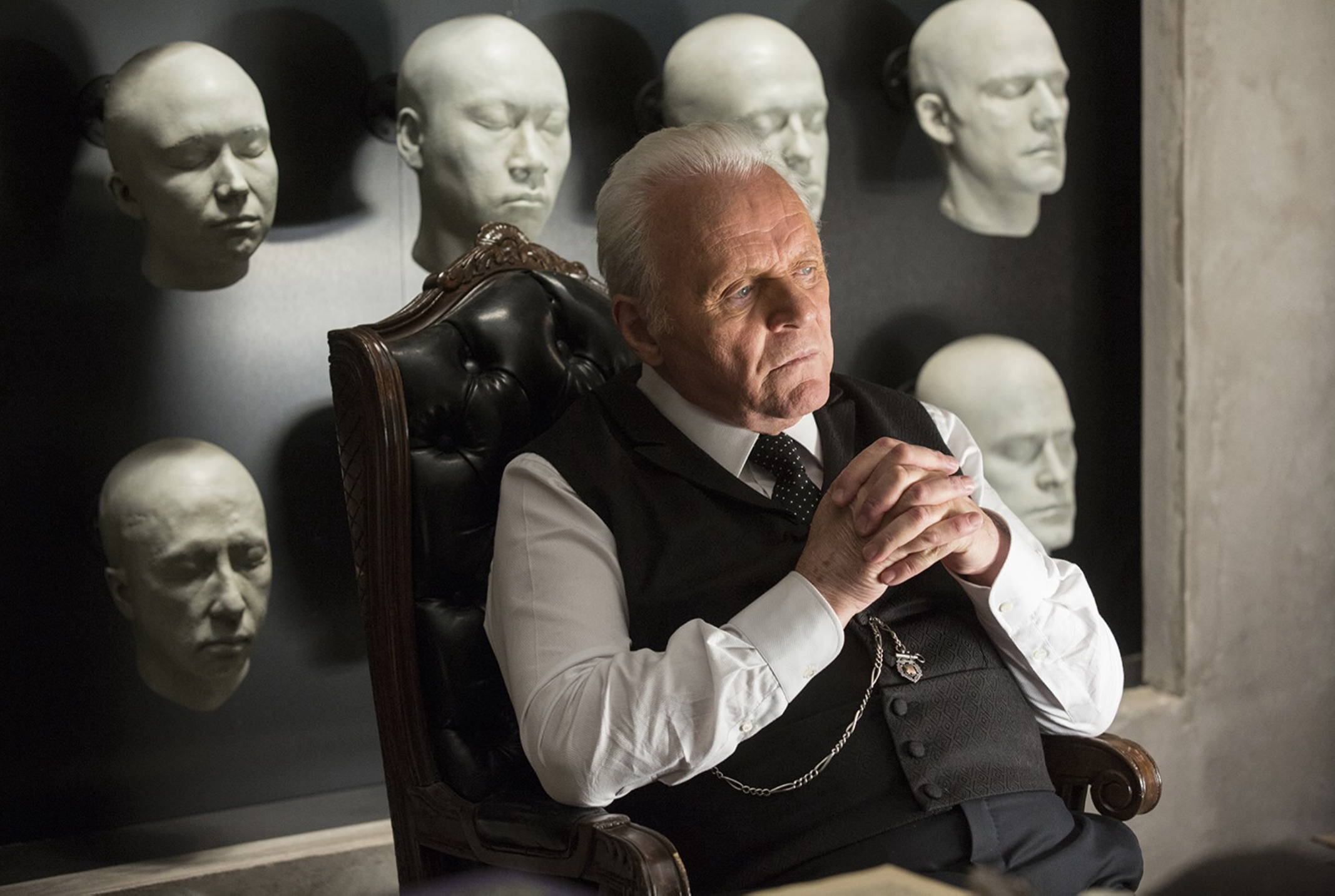 Arnold was trying to build on what they had already discovered when it came to making the hosts intelligent. He and Ford started with memory, added improvisation for believability, layered self interest into the mix, and were on the verge of figuring out the final piece to the puzzle of believable sentience in the hosts when he took his own life. He was working on developing a bicameral mind philosophy and experimenting with the hosts, but the experiments went poorly. The voice in the host’s minds drove many of them mad. Did his failure drive Arnold mad to the point of taking his own life, or is there more to the story than this? Is the fact that hosts are carrying on imaginary conversations with him mean he isn’t dead, or has he programmed his own consciousness into the park? Is he what the man in black, Ed Harris, is looking for in the maze? Could Arnold be the man behind the curtain in Westworld ala The Wizard of Oz?

There’s a quick scene of the beginning of the park and the construction of the first hosts, and in it we see Ford as a young man. I’m not sure how they did it, but they made Anthony Hopkins look like a way younger version of himself and it’s believable looking. Imagine The Elephant Man era Anthony Hopkins, and you get an idea of how young they made him look. CGI has come a long way in a few years. I remember how awful and unconvincing the younger version of Jeff Bridges in Tron: Legacy looked, and Westworld blows that out of the water. It truly looks like they went back in time and shot scenes with a younger Hopkins, so hats off to whatever FX company made that a reality.

Ford has a new narrative planned for the park, and in it Teddy’s back story is filled out. He joins a posse hunting for a man from his past named Wyatt, but is lead into an ambush by Wyatt and his men that seems almost supernatural. Wyatt’s men appear unable to be hurt by bullets, are dressed strangely, and have some bizarre animal sounding call as they attack. How will they play into the narrative of the story Ford is building? What purpose does this all have? There’s a part of me that believes that instead of revitalizing story lines like corporate wants, Ford is just creating a giant F you to his corporate overlords that may take the entire park down. 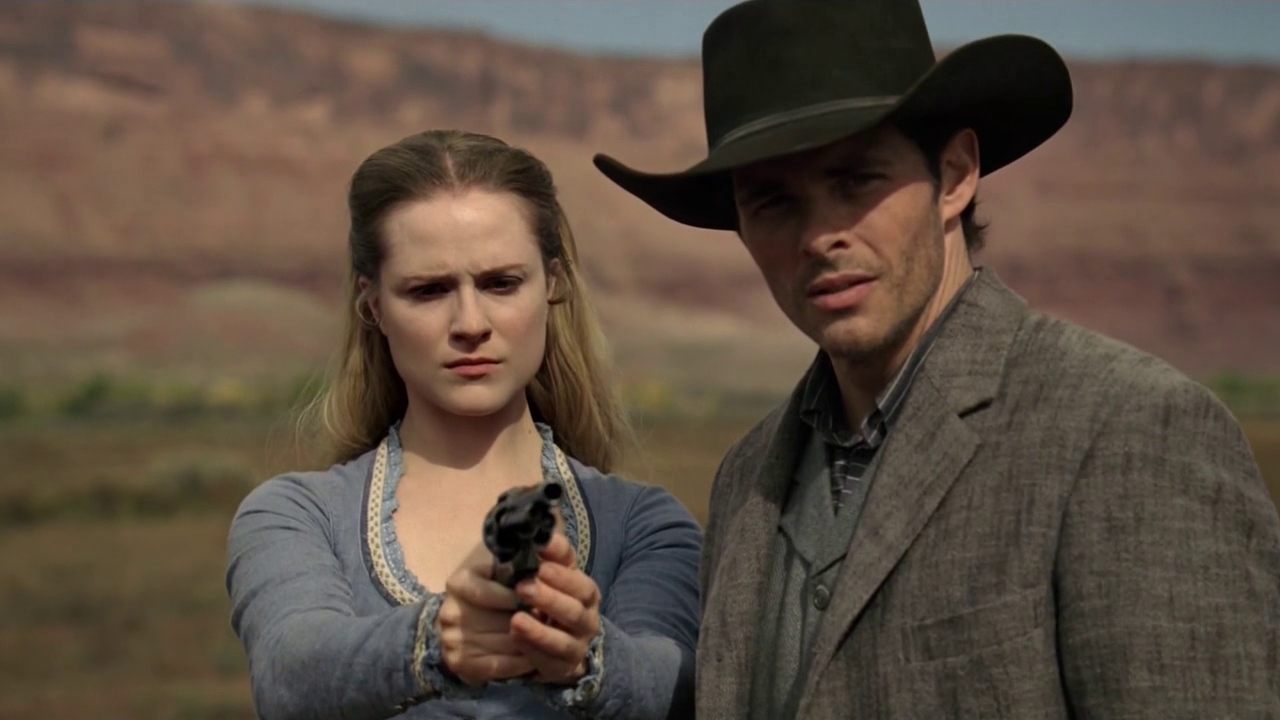 The hosts are programmed to interact within their own story loops and to not deviate much from their preset roles. We already know the hosts are programmed to not be able to hurt the visitors to the park, but when Teddy tries to teach Delores to shoot a gun and she can’t do it, we also learn there are characters who are programmed to be unable to handle weapons at all. At the end of the episode when she’s back in her own story loop of the killing of her parents and her raping at the hands of an outlaw, a voice whispers to her to kill her assailant. She pictures him to be the man in black, and she’s somehow able to overcome her programming and fire the gun, killing him. Is the voice Arnold’s?

Elsie and Stubbs track down a host who has gone off grid, and in the process learn he’s been carving animals out of wood. Every carving has the constellation Orion carved on its back, but he wasn’t programmed to be interested in stars. When they finally find the host stuck in a ravine, he’s put in sleep mode but still attacks Stubbs and then confronts Elsie. It seems he’s going to crush Elsie with a huge boulder, but instead smashes his own head in over and over killing himself. What drove him to this? Was he driven by the voice of Arnold or was it the virus that’s taking hold of the hosts allowing them access to memories that were supposed to be erased? Now that some hosts can go against their programming, does it mean they’re evolving, or are they merely pawns in Arnolds scheme?