Bernard struggles with the revelation he isn’t human and what it means moving forward, while Maeve uses her newly acquired powers to alter life within the park in an attempt to manipulate her way to freedom from WESTWORLD. Teddy and the Man in Black search for Wyatt but come to blows in the process. Who is the Man in Black, and why has he come to find the maze? 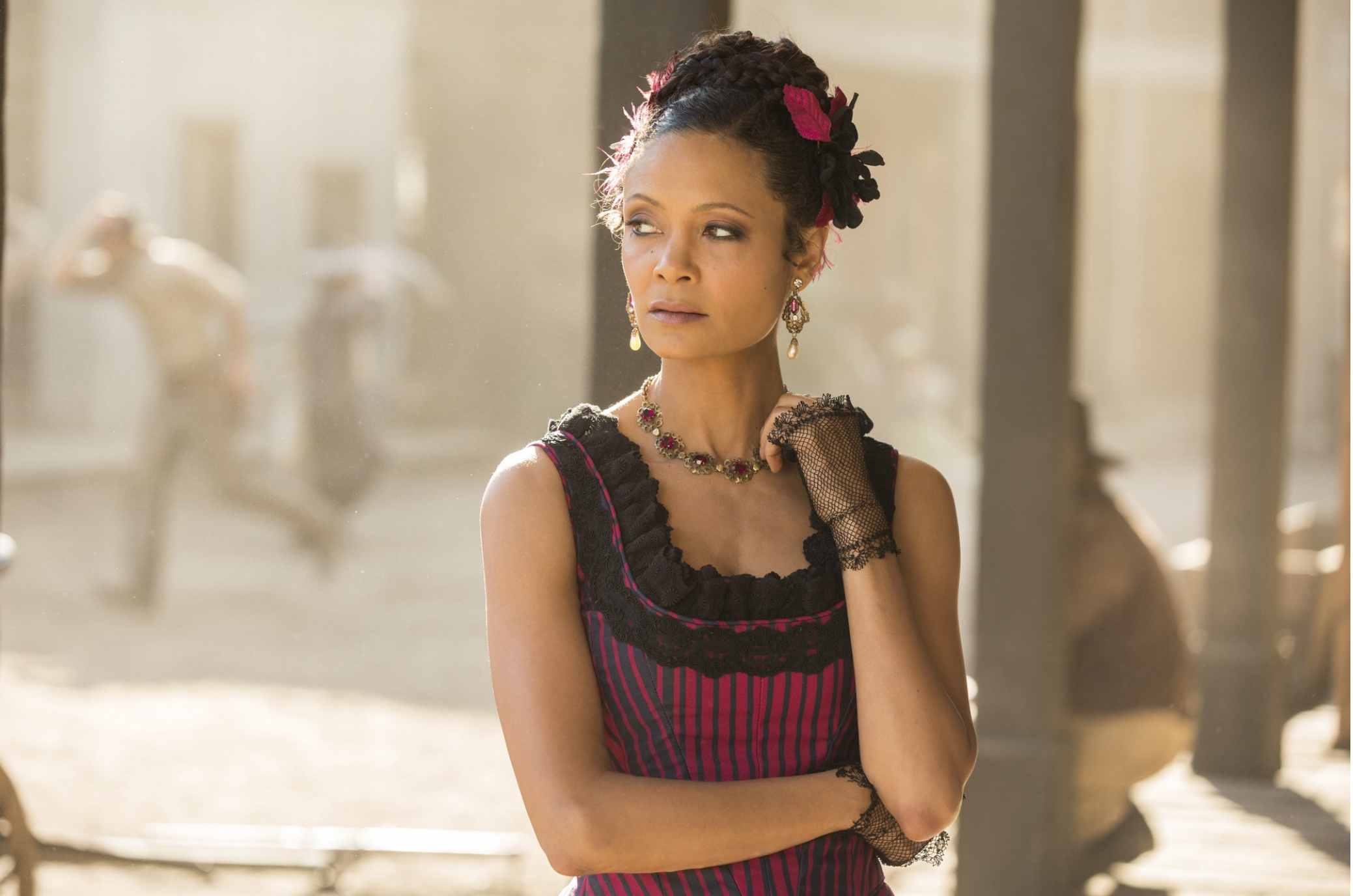 Maeve has been one of the most transformative characters on Westworld. When we first met her she was a hard around the edges Madame of the brothel in Sweetwater, but as the reveries unlocked her past, she’s become one of the strongest characters in the entire show. The revelation of her true nature, instead of driving her mad, has reinforced her independence and desire for freedom. She’s figured out how to compete in a rigged game, and she’s hell bent on getting out of Westworld. There are some problems that keep her from achieving this goal though. Some of it is programming and some of it is construction. She’s manipulated Felix and Sylvester into helping her with the code and changing her programming so she functions at the highest levels. The real problem is the explosive device implanted in all hosts in their vertebrae that’ll detonate if they leave the park. The removal of this will be a trickier matter.

Once Maeve’s back out in the park she suddenly has the ability to manipulate other hosts, much like the human engineers can do. They bend to her will in ways that surprise even herself. She said she wanted to rewrite her story and break out of Westworld but would need an army to do so. Can she manipulate the hosts to become the army she needs? We know she can hurt humans now, since she slit Sylvester’s throat only to have him healed before he died, but has her power corrupted her ability to get out of the park? She draws too much attention to herself, and soon the engineers have arrived to take her away. Is this part of her plan, or has she made a big mistake? 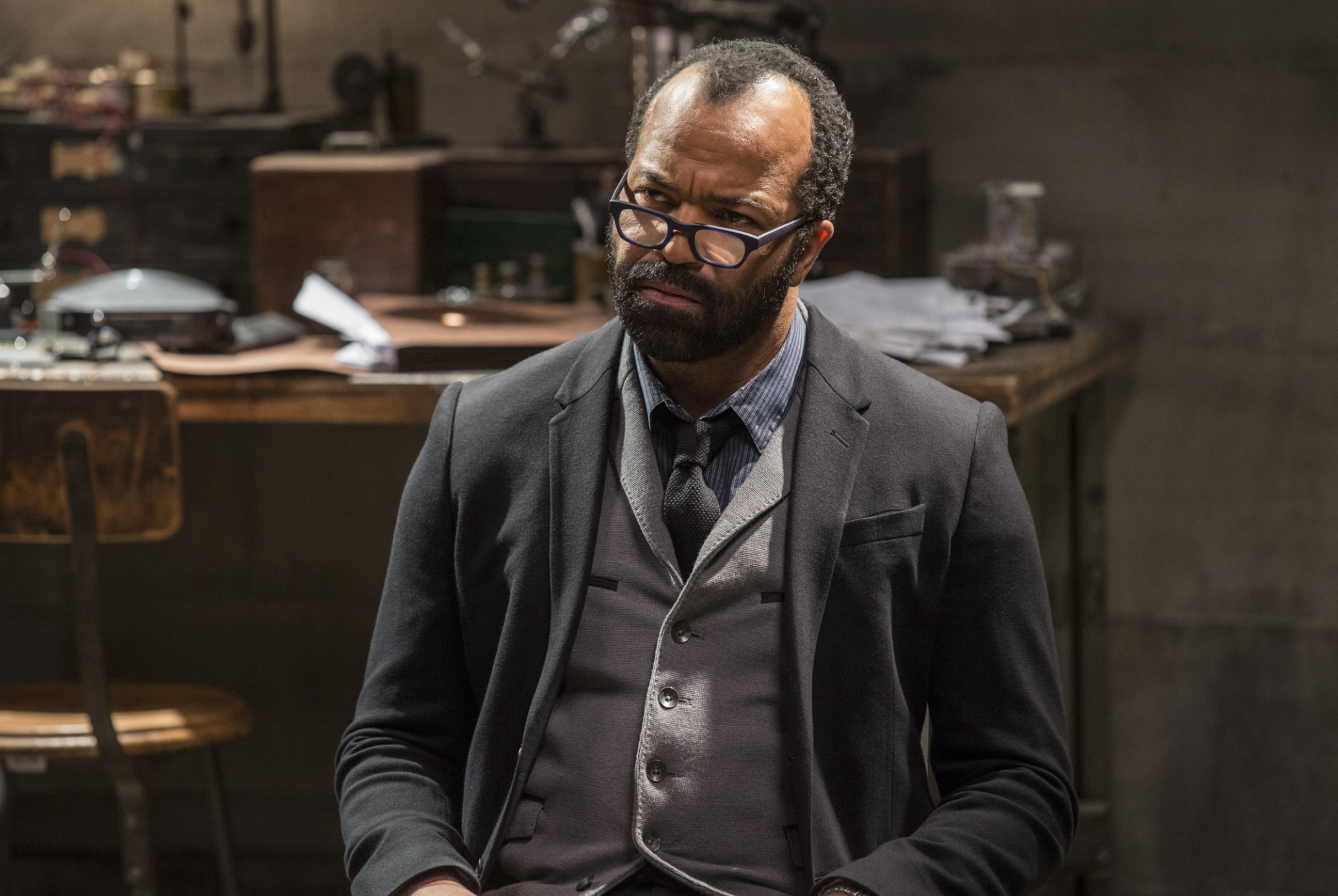 Bernard is inconsolable in the aftermath of what Ford made him do to Theresa. Beyond being distraught at killing the woman he loved, he’s also struggling with the realization that he isn’t a human like he’d thought. The memories of his wife, and his son’s death are all back story implanted to give realism of character. He feels pain and loss just like human emotions, and he questions Ford on what makes his feelings any different than a humans. Ford doesn’t believe in consciousness as being real or an entirely a human construct. In his estimation humans live their lives in just as tightly constraining loops as the hosts, but the hosts have more freedom since they don’t have the burden of memory. This question, the difference between human and nonhuman consciousness is what apparently drove Arnold mad. His and Ford’s viewpoints seem to have been in conflict with each other and threatened their working relationship and the park. Did Ford have Arnold taken care of in the same way Theresa was just taken care of?

It’s clear Bernard is special, more refined, and more fully human than the other hosts, which is something he and Ford worked on together. Ford built Bernard because he couldn’t find a human engineer that could help him create all of the shades of emotion he wanted the hosts to display. There were intimations and clues Bernard wasn’t fully human earlier in the show, but it was still shocking to see him beating Theresa to death. Ford orders Bernard to cover up all evidence of his and Theresa’s relationship, interactions on the day of her death, and any clues that could lead back to Bernard and Ford. In return Ford will erase the feelings of guilt and sadness from Bernard so he’s no longer burdened by them. Theresa’s death is made to look like an accident where she fell off of a cliff trying to illegally uplink data to a satellite out of the park. In her absence Bernard is reinstated to his job. Before Ford erases the memory of what Bernard did to Theresa, Bernard asks Ford if he’s ever made Bernard hurt anyone else before. Ford lies and tells him no, but Bernard has a flashback of murdering Elsie. How many times has Ford used Bernard to take care of his dirty work? Has their entire relationship been like this?

In the search for the maze, Delores and William are at the far reaches of the park where The Ghost Nation holds sway. It’s a dangerous place, and they run into the remnants of a massacre of soldiers who were waiting there to kill Delores and William. Delores is having intense flashbacks to either another time, or a future of what’s to become of her. She sees herself floating dead in the river momentarily and then the vision vanishes, but once she sets foot in the remnants of a town she calls home, visions of a life long past flood into her mind. It’s like she’s living in two time periods at once, bouncing between the two. She nearly shoots herself in the head, caught up in a memory of what Arnold wants her to do, but William saves her from doing it. She’s losing her mind, unable to tell what’s real and what isn’t anymore. William wants to take her back to Sweetwater, but they run into Logan and some soldiers. Logan has switched sides and now actively works against William. Their relationship was never solid to begin with, but does William end up killing Logan inside the park and taking over his job in the real world? 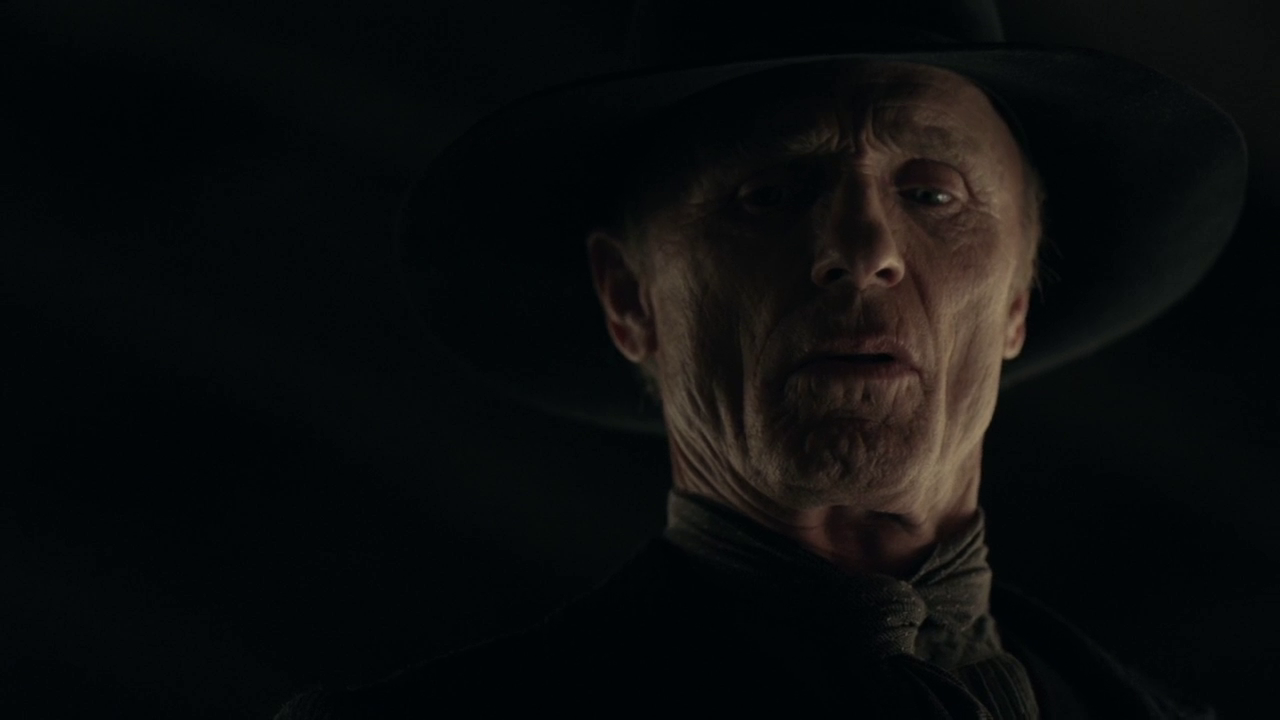 If the Man in Black is William thirty years later, he’s had a hard and terrible life once his true nature is revealed to him in the park. We find out a lot about the Man in Black while Teddy has him tied up after he remembers what the Man in Black has done to Delores. In the outside world he’s a titan of industry, a philanthropist, and has a wife and daughter. The problem is no matter how many good things he does in the outside world to build a wall and hide his true nature, his wife and daughter could always see right through it. His wife killed herself by taking too many pills, and his daughter blames him. He has nothing else to live for, so he’s come to Westworld to find truth and the entrance to the maze, only Teddy has drawn them into a trap set for them by Wyatt. It’s unclear if they will make it out with their lives.

Ford has been clever, and has been able to turn the tables on Charlotte’s attempt to overthrow him for now. The board wants him gone no matter what, so she recruits Lee to help her smuggle data out of the park using a retired host as the hard drive that contains all of the code Ford has kept from the board’s hands. If she’s able to get the code out of the park there’ll no longer be any use for Ford, though they’ll have a hell of a time getting him to leave. Another problem arises when Ashley, the head of security, notices something off about Bernard. He knows about Theresa and Bernard’s relationship, and when he offers condolences to Bernard, Bernard denies the whole thing. It doesn’t sit right with Ashley. If Bernard is found to be a host, it could ruin everything for Ford. Is his world about to crumble around him, and if it does, will the new narrative give him the ability to fight back and keep what he’s created under his control?

For six months out of the year, Jeff is holed up in his home with nothing to do but shovel snow, watch television, write, and dream of warmer climates.
Follow Jeff on Twitter: @OfSoundnVision
Keep up with all of Jeff’s reviews here.