This week’s Wisdom of the Crowd tackles the difficult subject of teen suicide – and the effect it has on those left behind.

When Cavanaugh and Ruiz examine the last video that 15-year-old Evan recorded before jumping to his death they struggle to make out his final words. Meanwhile, at the Hive a group of Sophe users have noticed something in the background of Mia’s last video – a black sweatshirt hanging on the back of her door. Just as Tanner tells Sara to move the image to the front page of the site, Cavanaugh arrives – he wants the team’s help to decipher Evan’s last words. 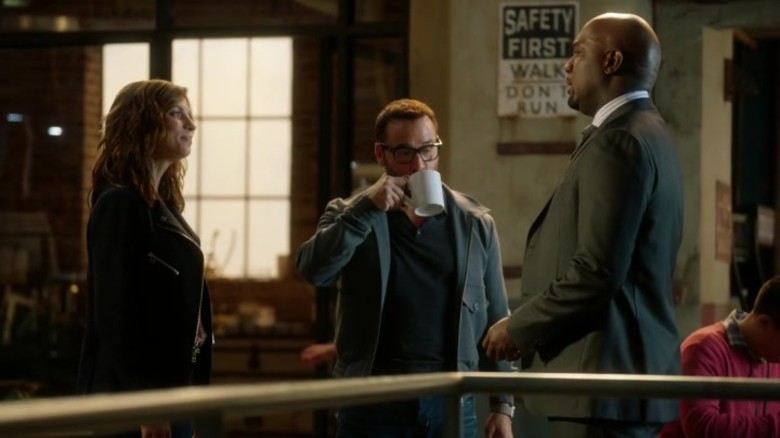 It doesn’t take Sara and Josh long to come up with an answer: turns out Evan was speaking Russian and what he said translates to ‘the 10 golden steps’. When they look up the phrase online they discover a disturbing connection: the suicides of multiple teenagers in several similar cases in various countries throughout the world. Tanner calls Cavanaugh to let him know, but he already knows that Evan’s death wasn’t an isolated event – another body has been recovered.

When Josh can’t figure out how the game is accessed Tanner suggested that Tariq and Cavanaugh go and talk to Evan’s parents, but Sara is adamant that she should be the one to go. When they get to Evan’s home his parents reveal that their son didn’t share much with them, but they agree to let Sara take his sticker-covered laptop. 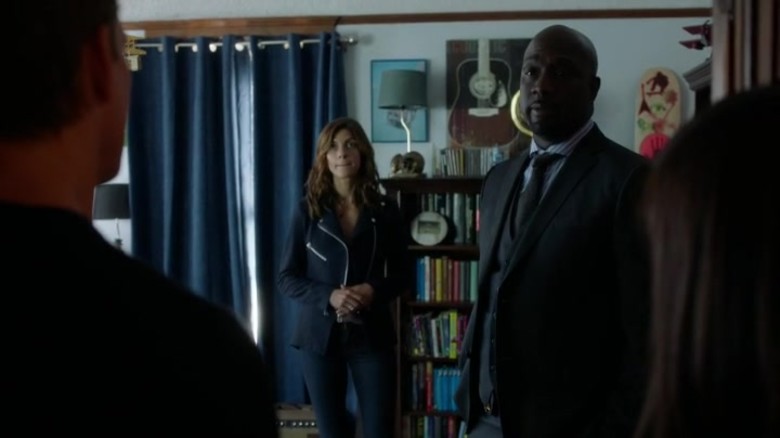 Back at The Hive, Tanner video chats with a therapist who also happens to be a Sophe user. He’s worried that putting the case on the site will give kids the wrong idea – but she assures him that it won’t. When he gives Tariq the green light to post there is an immediate new evidence alert – on Mia’s case. Users have figured out that the sweatshirt was a male size XL; and there is no record of it at the scene or amongst in the trial evidence – finally proof that there was another man in her apartment the night she died.

Sara gets a message from a teacher, reporting that a student fell from the scoreboard on campus – and that she had the same self-harm marks as the other victims. Sara and Cavanaugh immediately go to visit the girl, Zoe. She tells Sara that she doesn’t know anything about the 10 golden steps, and claims that she was just doing it for the thrill. When Sara looses her temper, Zoe’s mother intervenes. Before she leaves, an emotional Sara tells Zoe’s mother that she needs to tell her daughter that she loves her; she needs to let her know that she isn’t a burden. Outside, Sara notices a sticker on Zoe’s car – the same sticker that Evan had on his laptop. She realizes that it’s not just a sticker, it’s a QR code and when she snaps it on her phone she immediately receives a message asking if she would like to play a game. Back at The Hive the team reply to the message – and to the sender, who calls himself The Gamemaster. But Tariq quickly looses patience and one of his responses causes The Gamemaster to abruptly end the chat. When Tanner follows a furious Sara into her office we learn the reason that she is so personally affected by the case – her own brother committed suicide 15 years earlier. 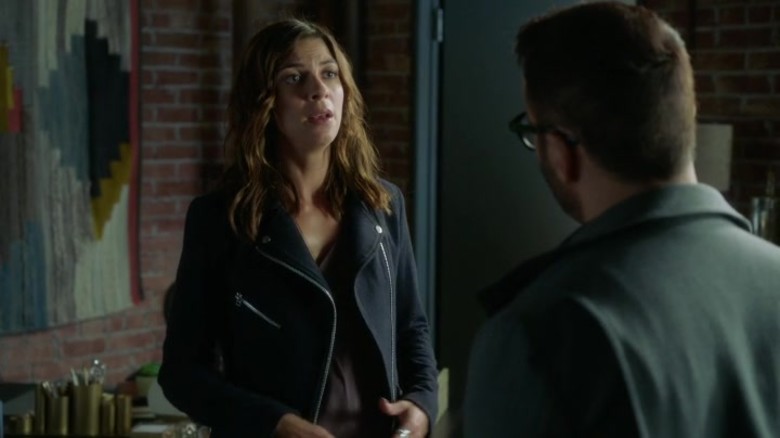 Outside, Josh has a realization – the stickers are the key; he can narrow down The Gamemaster’s location if he can figure out where the stickers are. He asks Sophe users to snap pictures of them and geotag their locations, but when Cavanaugh visits a cafe with a sticker stuck on the window he finds a stack of them inside; it isn’t The Gamemaster who has been putting the stickers all over town – it’s teenagers themselves. Josh is frustrated when he realizes that his plan won’t work. He tells Tariq that he could have been one of those kids – he was lonely and isolated, the perfect target for the game. 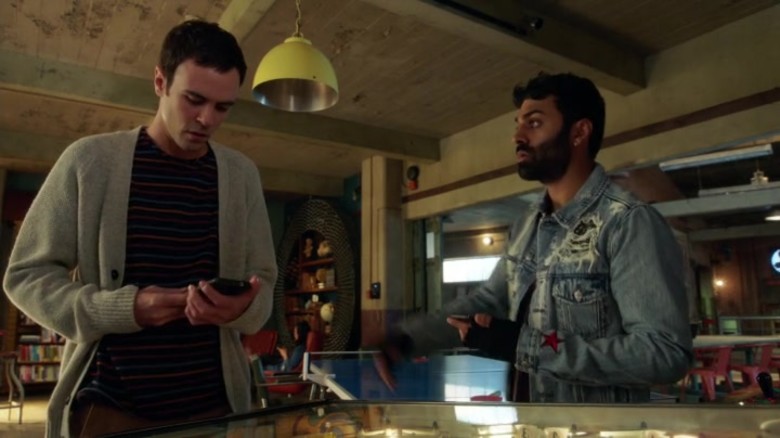 Sara gets a message to her own internal channel – from a user who claims he can help. When the team start a video chat with the user his voice and identity are disguised, but he follows through on his promise to help. He tells them to scan the stickers, this will show a unique printing pattern and allow them to find where they were printing. The plan works and soon Cavanaugh and Ruiz are showing up to arrest The Gamemaster at his home where the stickers were mailed. It turns out that The Gamemaster is a very normal looking kid called Jason, who sees the detectives coming and locks his phone. When they take him into custody his arrogance reaches quite spectacular levels. He claims that the stickers were an art project, it’s not his fault that kids actually chose to commit suicide – if anything he was providing a public service. He claims that he knows his rights, but is shocked when Cavanaugh produces a warrant for his fingerprint – which can be used to unlock his phone.

Once the phone is unlocked the team at The Hive identify three users who recently received the tenth message – but panic when they realize one is in Portland. Josh gets on the phone with the boy who is upset that he doesn’t have the courage to complete the game, but Josh tells him that he knows what it is like to feel different and promises him that it gets better. Then Tariq discovers that the message had also been sent to another user two days earlier: Zoe – and when her mom checks her room she’s gone 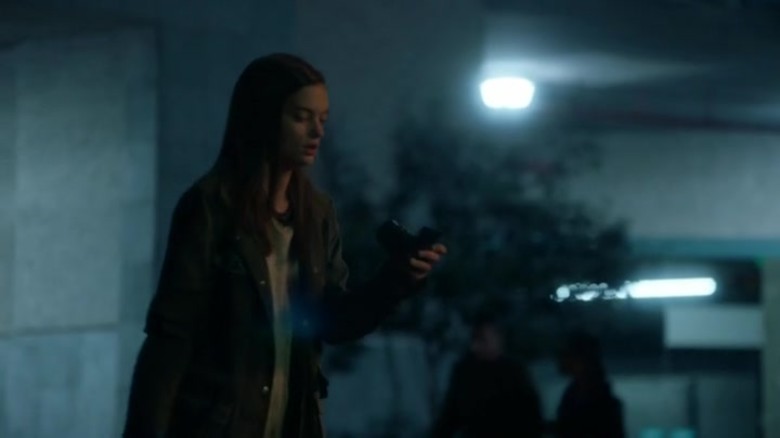 Josh puts an emergency alert on Sophe, asking users to help find Zoe. It doesn’t take long for her to be spotting in a nearby parking lot, and the users follow her up onto the roof. Seeing her standing on the edge, Josh calls the user and asks for the phone to be given to Zoe. This is where Sara steps in. She tells Zoe about her brother and the anger she feels when she thinks about the memories his death robbed her of. She begs Zoe not to rob her own brothers of those memories and reminds her that people need her. Zoe steps down from the ledge – just as her mom arrives at the scene.

With the case closed, Tanner and Sara get hot and heavy back at his apartment – until they’re interrupted by the sound of a new evidence alert. Users have identified the sweatshirt, it’s a limited edition that was only available at one boutique. Throughout the city Sophe users get the same alert. One of them is a mystery man – who is wearing the sweatshirt. Seeing the notification, he takes the sweatshirt off and throws it in the trash; before disappearing into the crowd…

Suicide is a heavy subject, but it is so important that we talk about it – and I have to give props to the Wisdom of the Crowd writers and cast for how they handled this episode. The subject matter was treated sensitively throughout, and the PSA at the end felt like the perfect way to wrap the episode up.

I was also glad to see more of Josh and Tariq this week, and it was great to learn more about Sara – Natalia Tena really stood out in this episode, especially when she spoke about the emotional impact of her brother’s death. And for the second week in a row we got a revelation about Cavanaugh! This time it was he has a 14 year son who lives in LA – the surprises just keep on coming with that one.

That all being said, “Trojan Horse” abandoned practically every plot that was set up in last week’s episode. There was no mention of the possibility of Carlos’s stabbing being connected to a high-level cover up; no mention of Allsourcer’s right to stop Sara working for Sophe; no mention of Alex; and no mention of Josh’s possible new girlfriend. This felt strange to me, is this all just going to be picked up next week? A lot of these plotlines seem too big to just forget about for a whole episode, and anyone who has been watching the series would no doubt have picked up on this. The new evidence in the Mia case is great, but if viewers start loosing track of the threads of the story they’re going to start finding it hard to follow – and they may start loosing interest.