WIZARD OF LIES, like most HBO movies, is full of faults. It’s too long, it utilizes a horrible framing device, and, at times, it doesn’t seem like it knows what it wants to be. But if you try your best to look through it all, you have a wonderful movie in its place. Although it’s kind of like comparing apples to oranges, Wizard of Lies is without a doubt the best HBO original movie I can remember seeing. When it’s at its best, the movie is Scorsese-esque: drops of comedy mix with an omnipresent aspect of dread to create a capitalist dystopia. When it’s not at its best, it’s almost always interesting.

We begin near the end. Bernie Madoff (Robert DeNiro) meets with his kids, Andrew and Mark, and his brother, Peter, to tell them the bad news. The scene is dour and bland and I was worried. I was about to be straight panicking when I was then introduced to the framework: a tell-don’t-show interview between an incarcerated Madoff and an unnamed woman with a penchant for being too on the nose. Fortunately, as the movie went on, the weight of the framework device was alleviated. DeNiro does a very good job with Madoff, and by that, I mean he doesn’t try to do too much with it. Michelle Pfeiffer, as his wife Ruth Madoff, is by contrast all over the map, and at first this was pretty distracting. But as the movie continued I begun to empathize with Ruth and understand why Pfeiffer decided to play the character so erratic; it’s a choice that patient viewers will appreciate.

What I thought this film did unexpectedly amazing was its portrayal of a flawed system. The flawed system not being Bernie’s ponzi scheme, but rather the institution of capitalism, mixed with our culture. Wizard of Lies tries to sell you on the concept of Bernie Madoff, before taking that away from you. In some ways, it’s a setup for what’s to come: the last thirty minutes of this film depicts Bernie as nothing more than the King of Dirt. But in other ways, the film hammers home the problem with capitalism as an American virtue. Bernie runs his business as a family business. Some families are cobblers, some are bakers, some don’t work with each other at all. The Madoffs are finance gurus, thanks mainly to their father being the most respected and well-liked financer in America. The irony of it all is that Bernie’s reputation almost carried him to the head of the SEC, the same department that led the investigation against him. Why was Bernie this respected? Because, as the movie subtlety argues, capitalism is a flawed system. Capitalism allowed a man like Bernie Madoff to not only thrive but exploit the very system and the people in it. Bernie’s penchant for hording wealth and earning his investors growth in fake projected income allowed him to run rampant with a scheme that earned him heaps of praise from every capitalist institution and agent. In no other economic styling would Bernie’s ponzi scheme be allowed to thrive. As Bernie is quick to point out, it’s not his fault the checks-and-balances never punished him. Misguided and underpaid government agents that should’ve found Bernie out much sooner simply did not.

The failings of capitalism are apparent throughout the film. There are consistent money problems and characters talking about money. When Bernie’s sons decline to sign his bond, all Bernie can muster is a surprised, “But it’s not going to cost them any money.” When he remembers seeing Ruth for the first time as a lifeguard, he’s quick to tell his interviewer that the pay was good. But the system seems to even grate on Bernie. He’s mean to service people and controlling over his family, while looking at other rich people, who do the same thing, and calling them, “fucking parasites.” At one point, Andrew makes a powerful statement for why this case would never go to trial. “I’m not a conspiracy theorist,” Andrew begins, as he goes on to talk about how their father’s clients would call the most powerful banks and rich men to the stand, something that would never happen. Even Bernie literally calls himself a victim of capitalism at one point; lamenting on the failures of a system whose very nature is to destroy the weak. It should be noted that Bernie says this while happily taking his sister-in-law’s life savings. It’s almost like it’s a compulsion: Bernie is obsessed with capitalism and it controls him. There is also an air of superiority about him, that you hear is common amongst the 1%. In a way, they’re our noble class and so casually taking the money of others to add to your own is seen by nothing but your birthright. The entire concept of the 17th floor can only be construed by someone who believes certain people deserve money and others are lucky to have it come their way. 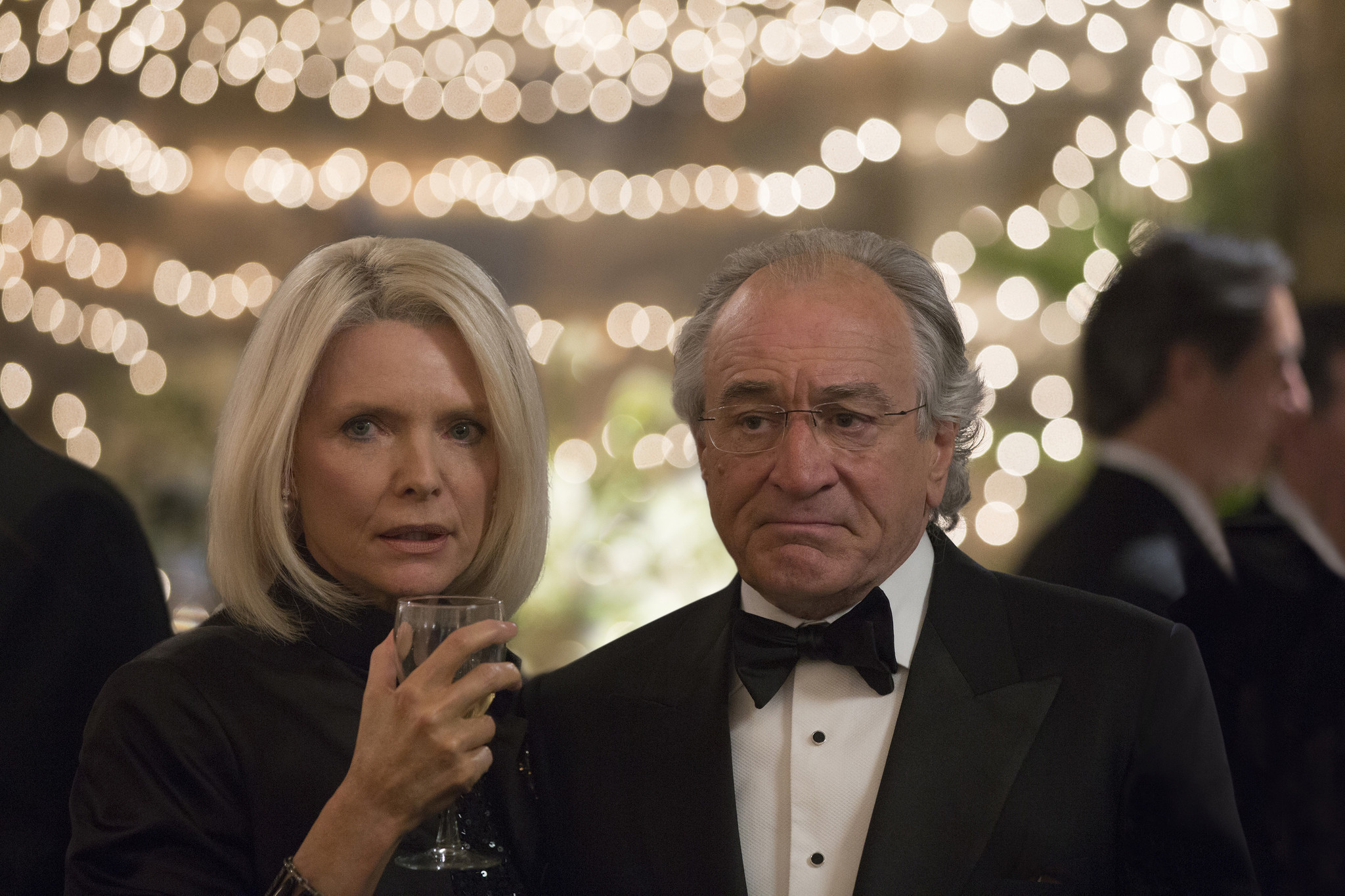 If you’re not familiar with the 17th floor, it was a secret floor in Madoff’s building ran by a man named Frank (Hank Azaria) that controlled all aspects of his ponzi scheme. What’s interesting is who Bernie decided to staff it with: a bunch of people from the lower class, with relatively no education and no family ties to the upper echelon of American wealth. The exact opposite of Bernie’s chosen front office, staffed with friends, family, and the rich. This isn’t to say that the 17th floor wasn’t rich, they were absolutely rich. But they viewed money in a fundamentally different way than Bernie that allowed them to not only turn a blind eye, but stay loyal to Bernie Madoff. As one 17th floor worker states in a FBI interrogation, “I felt lucky.” When the FBI agent equates this feeling to winning the lottery, the worker smiles and agrees. Even Frank, the head of the operation, saw Bernie as his beneficent boss, as he held out hope that one day Bernie would “make it all right.”

The movie also choses to investigate misogyny, although they abandon this midway through. Though there is one particularly long scene where Frank compares different vaginas to car models, the most striking way misogyny comes through is in how the family chooses to treat Ruth. Bernie won’t tell her a single thing, believing that this will protect her. He sees Ruth as something that needs to be protected, but not grow, kind of like a baby. When Ruth tragically admits that she’s never created anything in her life, never had a meaningful job and never contributed to society, Bernie doesn’t suggest she change any of this. He listens, frowns, and adds some two cents. Her sons also keep her at a distance, which never seemed fair to me. If they were in the same boat as their mom, why would refusing to talk to her help the process? Throughout the movie, Ruth is never taken seriously, and there are many other instances of women not taken seriously. Bernie even likes to greet women by grabbing their ass. In a lot of ways, this is the world of finance, a male dominated culture that would not exist without capitalism, without people like Bernie Madoff. It harkens back to the age-old question: Hate the player or the game? At this point, I think it’s fairly easy to hate the game, but there is near equal evidence to see Bernie as nothing more than a rogue agent. His actions pushed one son to suicide, and his wife to attempt suicide. His other son died due to cancer, but before he consciously never made any efforts to speak to his father before his death. The countless lives of the middle class who dreamed of being rich, only to be swindled are also mentioned a number of times in the film. There’s also something to be said on the nature of Bernie during the trial. Instead of being remorseful, worried or nervous, he’s calm and confident, often defending his actions or calling himself a victim of circumstance. But Bernie casually went to prison, while Ruth contributed to society and volunteered with Meals on Wheels, and Andrew spoke at colleges. It’s clear Wizard of Lies wants you to make a choice. The last line of the film shows a broken Bernie asking, “Do you think I’m a sociopath?” An important question whose answers will speak to many of your world views.

Wizard of Lies airs on HBO