Young Sheldon discovers his love for comic books in this week’s episode, “A Therapist, a Comic Book, and a Breakfast Sausage.” The show is really starting to come into its comedic voice, offering jokes that land really well in single-cam comedy. It’s also starting to embrace its identity as a prequel to The Big Bang Theory much better, dedicating storylines to explaining different aspects of Sheldon’s adult personality and how they came to be.

This week’s episode dedicated its origin story explanation to Sheldon’s love of comic books. At the beginning of the episode, Sheldon has, very characteristically, written off the idea of comic books as “picture books for little kids.” I really like this detail in the show, because as soon as I heard it I was like, “Oh yes, of course. That does sound very much like something Sheldon would say.” Which, as we all know, is a conundrum with Sheldon’s adult character, as adult Sheldon LOVES comic books.

Of course, explaining how we get from there to Sheldon loving comic books is the entire story of the episode. But it adds another dynamic layer to Sheldon’s character that I feel, in some respects, redeems a small bit of some of The Big Bang Theory’s crimes against nerds and fandom. For a little background reference for those of you who might not be aware, The Big Bang Theory has been, for many years, a sore point and well-discussed topic for debate on the subject of depicting nerd culture. In many ways, the show has been criticized for its shallow representation of what it means to be a “nerd” and like “nerdy” things, making nerd culture the butt of the joke and laughing at us, rather than with us. 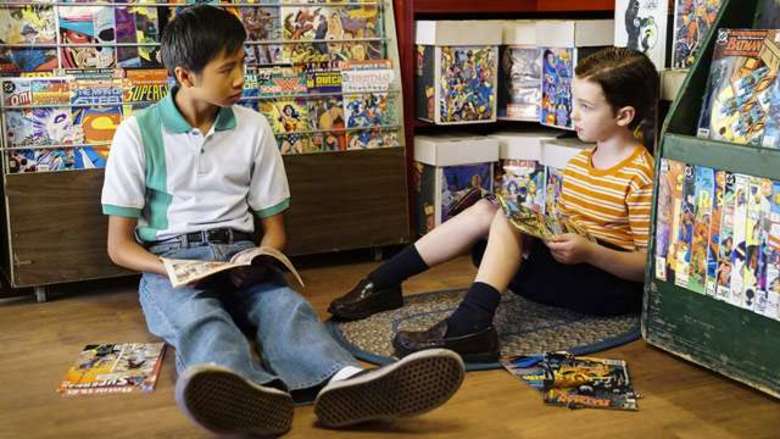 In that same vein, the depiction of Sheldon’s – as well as the rest of the guys – love of comic books in The Big Bang Theory has always come across as just a tropey given characteristic of being an all-around nerd. Comics in a lot of ways have been depicted as childish, making the juxtaposition of these grown, genius men loving these books the point and punchline of many jokes in TBBT.

But Young Sheldon changes that narrative slightly. The show demonstrates Sheldon’s connection to comic books through his identification with the X-Men. Like many of us who love to read – not just comic books, but any books – Sheldon finds a story outlet with which he can relate, and it actually helps him cope with the challenges he faces in the real world. Being able to identify with characters in the X-Men helps Sheldon actually process the real world better, and manage his less socially normal characteristics. It’s actually a really relatable and honest depiction of why so many people do connect with stories, comic books or otherwise, and it’s done in a charming way. 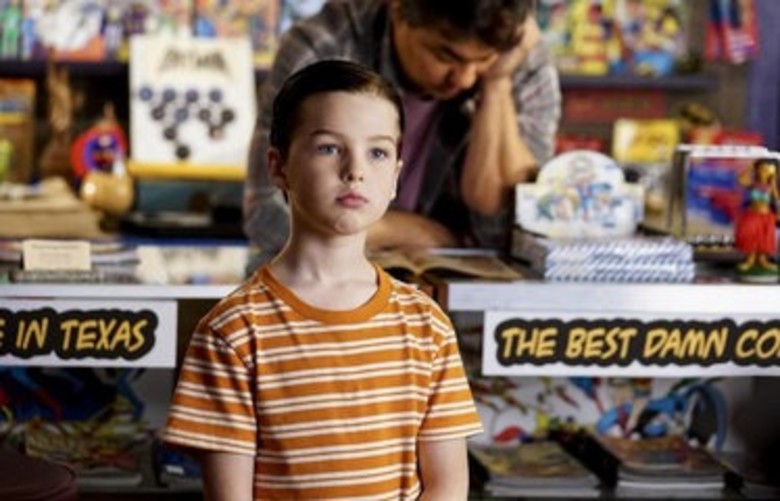 I also need to give a quick shoutout to Tam, Sheldon’s only friend. Honestly, this episode was made 1000% better by Tam’s comedic timing and incredibly deadpan delivery of all of his straight-character lines. If you haven’t seen the episode, or don’t plan to, just watch the comic store scene. That’s all you really need. The cut away shots between Tam and Sheldon while Sheldon attempts to eat a Red Vine (the first solid food he’s had in five weeks) are pure gold. I was genuinely laughing out loud, and it was entirely due to Tam.

The basic gist of the episode is this: Sheldon almost dies choking on a sausage (a sexual innuendo joke that, while it could have been funny in an adult show, misses its mark in this show) and becomes too scared of solid food to eat anything. As a result, he spends over a month just eating blended meals he can drink until his parents decide it’s time to take him to a therapist to try and see if he can’t work out his issues and get over his fear of solid food and choking. 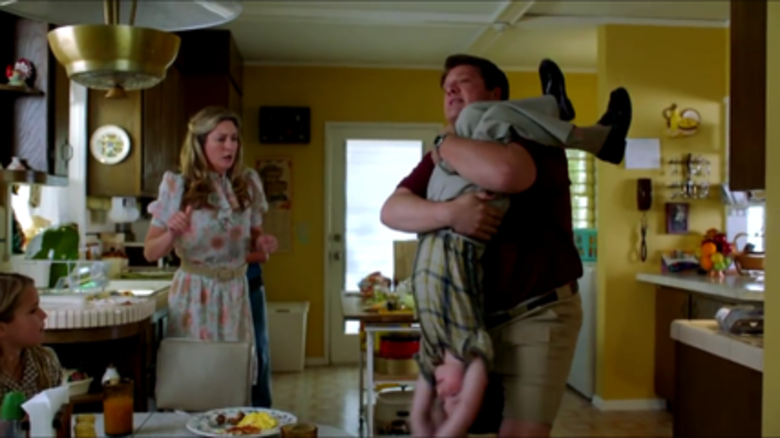 Going to the therapist works, but not for the reasons his parents expect. In the waiting area of the therapist’s office, Sheldon begins to read an X-Men comic and discovers how much he relates to the characters. He leaves the office without telling his parents, on the hunt for a comic book store where he can pick up the next book in the series and finish the comic story.

At the comic book store, he runs into Tam, who happens to be snacking on Red Vines while he reads comics. After a little creative inspiration from the comic books, Sheldon decides to take Tam up on his offer and tries a Red Vine; the first solid food he’s eaten in over a month. And thus ends Sheldon’s fear of solid food and begins his die-hard love of comics.

The show is shaping up to be genuinely promising in terms of story, humor, and redemption for nerd culture, but will it continue to build on the positive gains its made thus far? We’ll have to keep watching to find out.