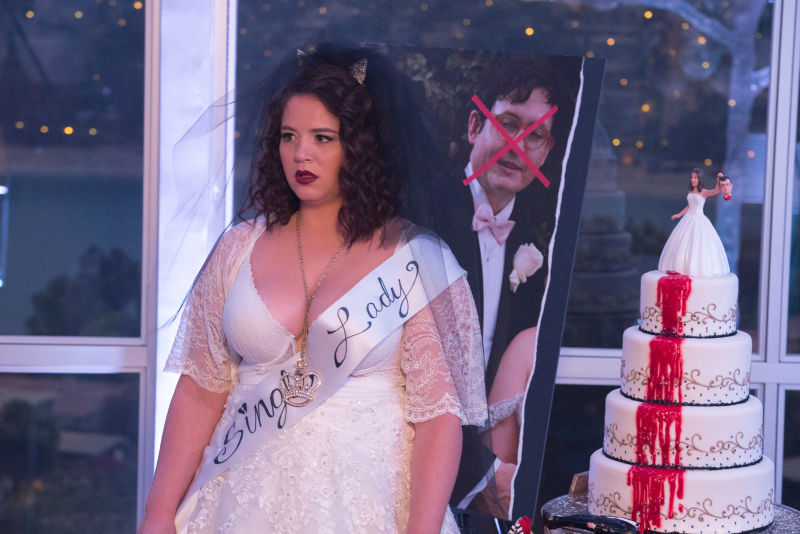 I’ll try to forget about last week’s beautifully depressing episode of You’re the Worst because Gretchen is back in LA. “A Bunch of Hornballs” begins with  Gretchen catching up with Lindsay, who’s still sore about her work “friends” ditching her last week for karaoke. Even though she’s down, Lindsay cheers up when she gets her final divorce papers in the mail. Gretchen has a hard time ditching Boone for the night, who Lindsay teases her about officially becoming her boyfriend.. Uncomfortable with the idea that she may be involved in a new relationship,  Gretchen distracts Lindsay by promising to throw Lindsay a divorce party. Lindsay’s excited — this is just another opportunity to show her work friends how cool she is.

Jimmy’s trying to pick up the pieces in his own life – he’s attending an Erotica Expo at the request of his marketing team. 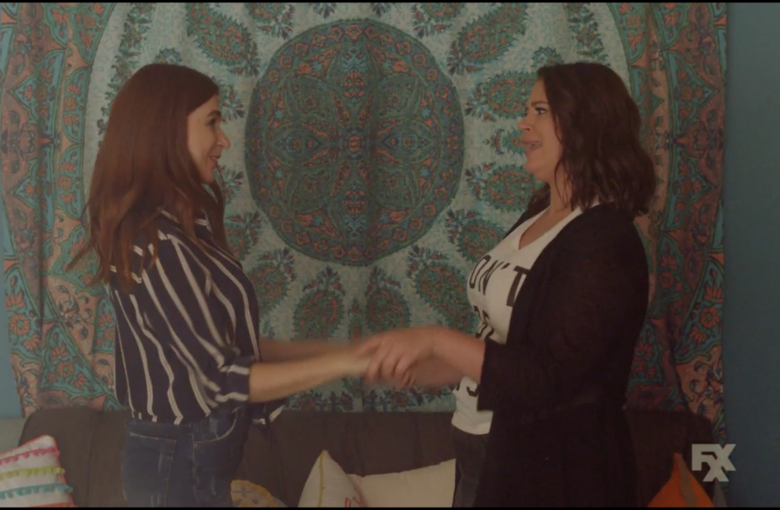 Annoyed that she agreed to throw a party for Lindsay, Gretchen ropes Edgar into planning the entire thing.  Admittedly, Edgar and his bougie friend Max put together a pretty sick party (better than any birthday party I’ve been to). Throughout the party, Gretchen tries to ignore flirty text messages from Boone, trying to distance herself from any resemblance of a relationship.

Stuck in his hotel at the expo, Jimmy finds a friend in another author, Adrian, who understands Jimmy’s saltiness at having to disgrace his “literature” at this expo. She encourages him to try and have fun this weekend instead of pouting.

Back at the party, things have gone sour. Lindsay’s upset that no one from work has shown up (except Carl, who doesn’t count because he shows up to everything), and Gretchen, who’s been pretending to be sick, is shocked to find Boone at the front door, annoyed that she lied to him. Gretchen apologizes, getting Boone to come in for one drink.

Lindsay’s party goes from bad to worse when she reads text messages on Carl’s phone that reveal how terribly her co-workers talk about her. It’s pretty hurtful, petty, and childish to be honest, and I would’ve completely understood if Linsday lost it right there. But no, Lindsay picks up her ego and tries to give a positive speech about being finally free of her husband. That is until a roaring fit of laughter draws everyone’s attention to a man in the back of the party. That’s right, Paul, Gretchen’s ex-husband, has crashed the party. The two of them argue, Paul ruining the who point of the night and claiming that Lindsay blames everything on everyone else, leaving Lindsay with an emotional hangover. 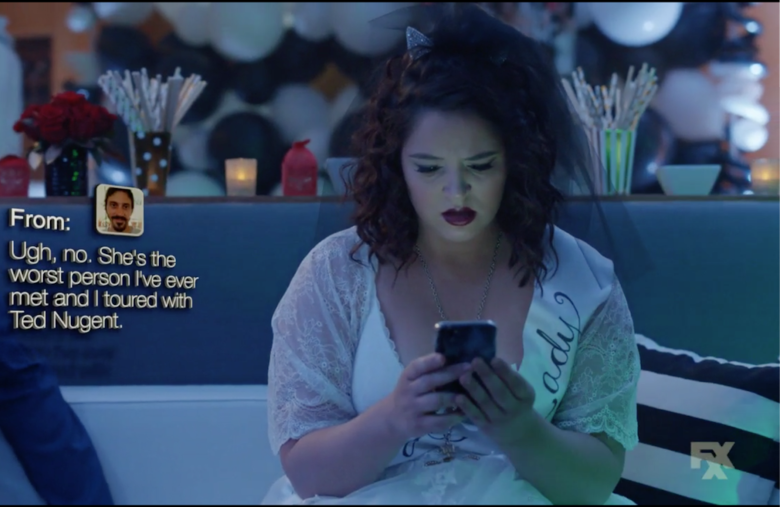 Back at the expo, Jimmy takes Adrian up on her advice and brings a group of his fans back to his hotel room. During a rousing game of spin the bottle, things get hot and heavy between Jimmy and Adrian, whose chemistry is clear to everyone in the room – including one of Jimmy’s super fans who looks pissed.

I think I’ve forgotten to mention that Boone’s daughter has been waiting in the car while Boone has “one drink” in the party.Without the permission of Boone, Gretchen brings Olivia into the party, having heard how unsafe the neighborhood was on Next Door. The thought is cute, but Boone doesn’t seem too pleased.

Things have moved to the next level with Jimmy and Adrian, and the two are about to get down and dirty when Adrian lets out a blood-curdling scream and throws up, over and over and over. Something has to be wrong.

The party is over, and Max brings Edgar the bill – a whopping $6,000. Edgar nearly blows a casket and realizes that he’s never spent as much money in his life as he has with Max. Max is that “keeping up with the Jones’ “ friend. It becomes clear that Edgar’s so desperate for male companionship, that he’ll put up with anything.

Boone confronts Gretchen about bringing his daughter into the party. He explicitly stated that he wasn’t ready for Gretchen to meet her yet. Boone expresses that he doesn’t want his daughter getting attached too quickly to anyone, especially someone he actually likes. Boone tries to break up with Gretchen, but Gretchen stops him, telling him that she has feelings for him and wants to go for it. And he agrees. They’re officially a thing.

Jimmy tries to console Adrian, who lays on the bathroom floor ashamed of herself. She cries and cries, and even admits she’s a fraud – an erotica writer who’s never even had an orgasm! Before Jimmy can make her feel any better, he gets a call from Gretchen.

It’s a simple phone call, Gretchen just calling to fill Jimmy in on the party. But it’s so sweet because it’s the first time all season we see the two of them happy to be talking to one another. I know I’m contradicting myself, but I want them to get back together now. There, I said it. 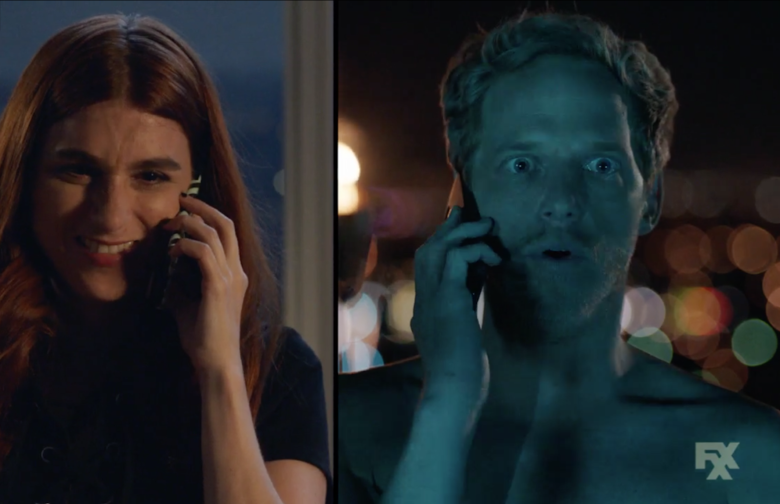 The ending of this week’s episode was enough to earn the entire thing a high score. Here they’ve set up Gretchen completely earning Boone’s trust by meeting his daughter, something he was skeptical about in the first place, only for her to fall back to Jimmy. And no, this episode didn’t promise any sort of romance between Gretchen and Jimmy, and things may indeed work out for her and Boone, but let’s be real. What makes it smart to me is the fact that it touches on something very real – wanting what you can’t have. As soon as Grethen realized she’s sealed her fate with Boone, it seemed to dawn on her that she was about to take the first big step in saying goodbye to Jimmy forever. Calling him was almost a way to solidify that he’s still an option if need be – an option she’d very much like to take in her heart of hearts.

It’s brilliant, because I’m already sympathetic towards Boone, who’s obviously a very caring father. Also, I already feel a sense of dread about Gretchen and Boone’s relationship from that one phone call between Gretchen and Jimmy. Will Olivia end up hurt? Will Gretchen end up in an unfulfilling relationship out of obligation? I’m not sure, but this episode set up some really heartbreaking drama.

Also, Lindsay’s workplace conflict has gone from a little one-off to a full-blown existential crisis. It’s sad, because episode one of this season showed her so put together and optimistic, and by mid-season she’s ended up where she is. Seeing the texts from her coworkers was certainly the hardest part of the episode for me, and it’s undeniable that Gretchen needs a serious wakeup call in her own life and how she views reality.

Coming off of a Gretchen centric episode, I’m glad to see everyone back together. Even more so, I had completely given up on Gretchen and Jimmy, so it was actually a pleasant surprise to see them  interacting in a way that wasn’t evil. That phone call was all I needed to keep my hope alive for two people who so obviously don’t need to be together. Curse this show.