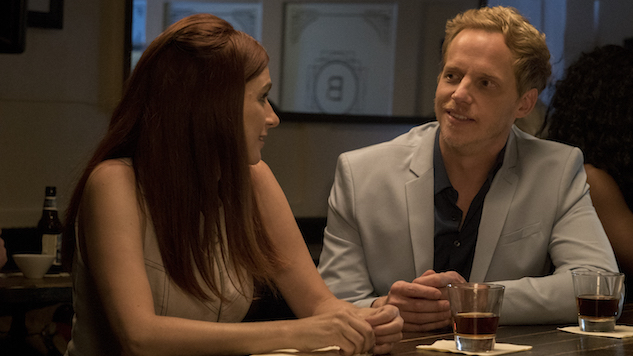 This episode left me with a lingering feeling: what’s the point? To clarify, I was struck with the realization that Jimmy and Gretchen aren’t going to change for the better, and that all we’ve built up during their separation truly doesn’t matter. When push comes to shove, Jimmy and Gretchen don’t want to change, no matter how much we want them to. It’s easier for them to stay the same, therefore easier for them to choose each other (I’m referring squarely to Gretchen right now). Moving on is tough when it requires you to become a better person, and becoming a better person is work. So, here we are…

This week’s long titled episode starts with Boone inviting Gretchen to the International Night he has with Olivia. All Gretchen has to do is pick a country, bring some food representing that country, and then do a little presentation. It’s simple and a fun way for Gretchen to connect with Olivia, something Boone desperately wants.

Even though it’s not mentioned much during this season, Gretchen has a job, and this week her job is getting Sam and S***stain to do a collab in the studio with Ben Folds.

Meanwhile, after Jimmy get an invitation to appear on an NPR game show called Tip of My Tongue ( a game show styled after Wait, Don’t Tell Me), Gretchen tries to stem her saltiness that Jimmy invited everyone else except her, deciding to focus her attention on Interntaional Night with Boone. 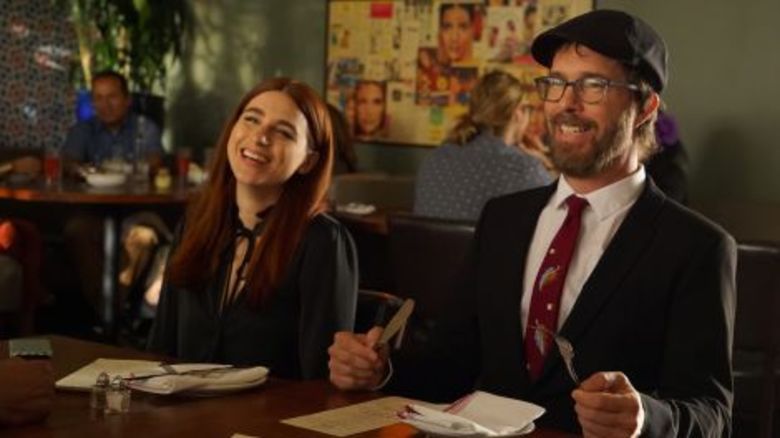 Jimmy throws himself into prepping for the show, struggling to figure out how to wow his audience and remain funny. As Edgar and Max coach him through his interview, Edgar tries to bring up his experiences in Iraq, prompted by a bad Iraq joke from Jimmy, but Jimmy ignores him. Max picks up where Jimmy left off, offering himself as a listening ear for Edgar that Jimmy no longer is.

Later on, It’s clear that Max has bitten off more than he can chew  as Edgar begins a spew of terrible, terrible things that’s happened to him in his life (including pooping his pants, ending up on skid row, etc). Once Edgar finishes baring his soul to Max, Max gets awkward and cold, leaving Edgar alone but thanking him for the”gift of sharing.” Later, Edgar gets a call from his boss, and learns that Edgar will be working on high concept sketches alone from now on, and that Max has been moved over to episode development.

At the radio interview, Lindsay decides to shoot her shot with host Steeb Corniglia, hoping to improve his “tragic look.” Shooting herself in the foot, Lindsay admits that Jimmy was the one who’d made a comment to her about Steeb’s look. Yikes. As game show begins, Steeb begins giving Jimmy  the cold shoulder. As the jeapordy-like game continues on, Jimmy struggles to win the affections of the audience, Steeb making sure to throw Jimmy under the bus as the other contestants (clearly pros at this game) outshine Jimmy. 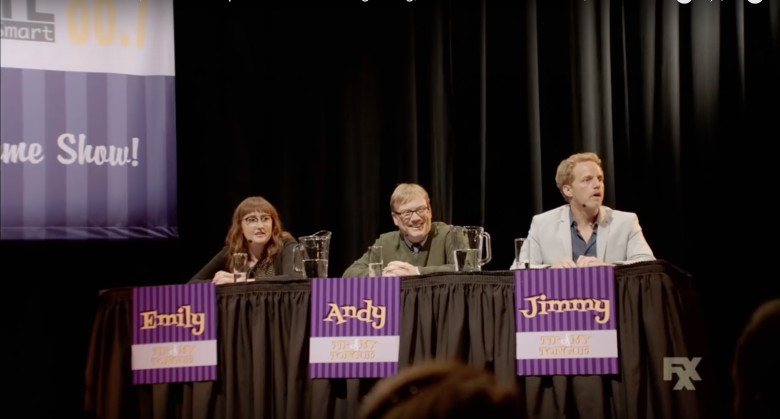 As the taping goes on, and Jimmy continues to flounder, likely seriously starting to question his talent as a writer, Lindsay gets a call from Paul, who begs her to get him out of jail after bicycling under the influence. Clearly still inspired by her visit the the lemon grove,, Lindsay excitedly runs off to be there for someone who needs help. After dragging Paul into her place, the two of them reconnect. Paul admits that he’s struggling with the loss of his almost child. This touches Lindsay, but the end of their storyline ends ambiguously.

Meanwhile, at International Night, Gretchen struggles to maintain her cool with Boone and Olivia. When it’s her turn to present her country (France) things get real weird when Gretchen begins a strip tease for Boone (yes in front of his daughter), prompting Boone to immediately stop the performance. For whatever stupid reason, Gretchen storms out, caling bs. I gotta admit, there’s nothing that justifies her behavior to me, and I’m so over her. Once Boone confronts her about it, Gretchen admits that she doesn’t know how to act around Olivia (even though simple common sense tells you not to do a strip tease in front of a kid but… okay). After coming down, Gretchen is able to finally connect with Olivia over an instagram dog, only to be interrupted by a text from Jimmy, who she rushes to go see, pretending she has a work emergency.

Funny thing is, she does have a work emergency. While Gretchen meets Jimmy at a bar, Sam and S***stain call her incessantly after Ben Folds shows up a drunk, bloody-headed mess to their recording session.

At the bar, things have settled back into a familiar pace: Gretchen and Jimmy enjoying being terrible people together. After bonding over cursing out a bar patron, the two begin making out. Cut to black. 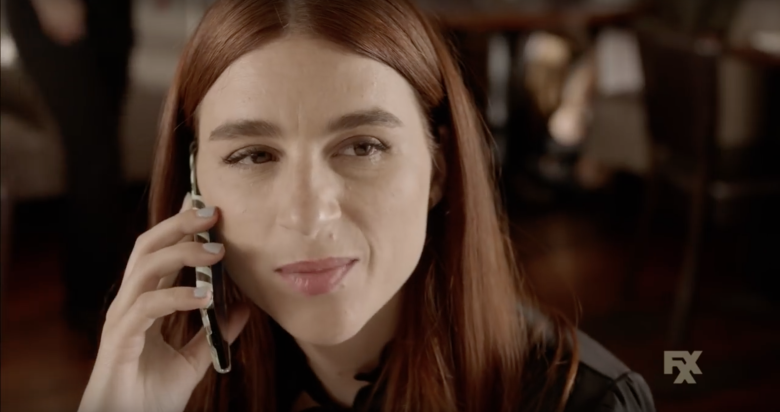 So the most important part of the episode to me was Edgar’s struggle with finding someone that can hold his emotional weight. Now, his entire character makes sense. He plays the funny, lighthearted guy because that’s what keeps people around. Being funny and carefree gets you way more friends and attention then showing your true emotions. But Edgar’s had a dark and seemingly tragic life, and no amount of laughing it off has healed him from it. It appears as though Edgar’s been waiting for a moment where he can find someone he trusts enough to open up to. He’d hoped that person was Jimmy, and Max seemed to be a promising friend… until he wasn’t. Now isn’t that a  dose of realness. Something I’m sure we can all relate to is feeling as though you have to hide or transform your true self in order to gain and keep friends. It’s so much easier to play happy, to say “I’m fine!” because in all actuality, finding people who will be there to listen to you and accept you for who you truly are is tough. The tragic thing about Edgar is that usualy by his age, people have at least ONE person in their life that they feel comfortable with. Yeah in your 20s you weed out the fake friends, but by Edgar’s age, you’re supposed to have a solid foundation of people. But he doesn’t. And now that the floodgates are starting to open from him, it’s going to be interesting to watch how Edgar copes with the loss of someone he finally trusted his life story with. In my opnion, this entire episode could’ve focused on Edgar and I would’ve been satisfied.

But it didn’t, instead we got the thing I thought would make me happy – the kiss. After an entire season of the two demonstrating how much it’s time to move on, the message of this episode seemed to be that sometimes, we’ll make the bad choice because we’re afraid to change. Maybe moving on isn’t in the cards for them two, which is sad considering her relationship with Boone is clearly blossoming. I want to be wrong, because if this is the case, I’ll kind of feel like I’ve gained nothing from the season. What was the point if they’re going to end up how they were from the beginning? However, I’ll argue again that this show plays on the truth of reality. We all have that friend, that no matter how much we beg them to move on, to change, to get better, they’ll always go back to their old ways. Why? Because it’s easier. It’s easier to find someone that accepts you and all your terrible-ness instead of being with someone who calls you out on your bs (Boone). So we’ll see.  Either way, the slightly murky  ending of the episode wasn’t my favorite, and I wan’t left feeling much excitement about the possibility of the two hooking up. I will say, it certainly got me interested for the last two episodes,  where Gretchen either has a devastating choice to make with Boone or a hard one with Jimmy