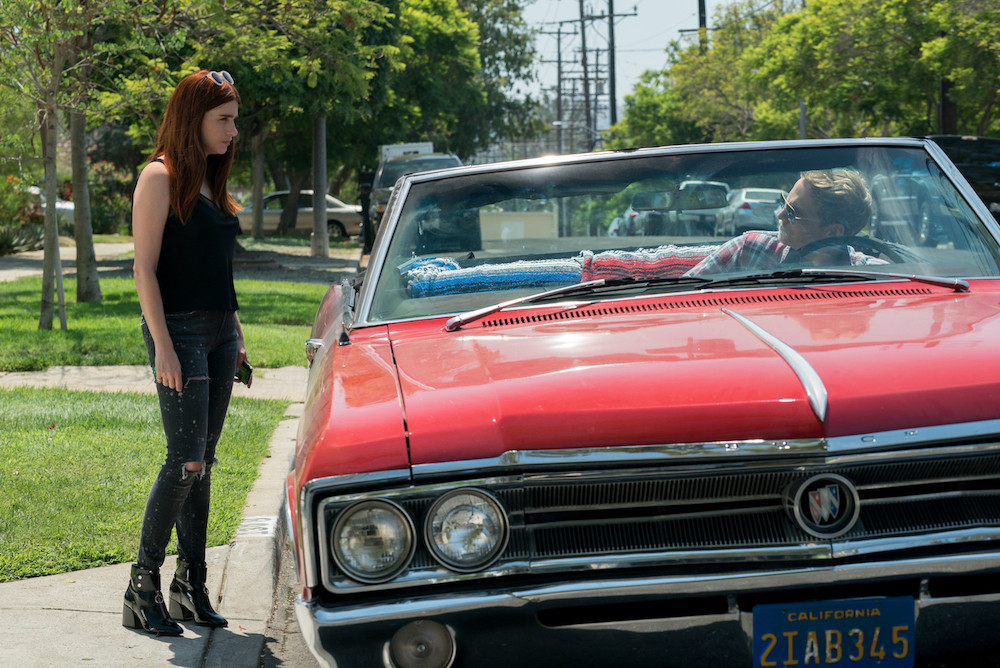 It’s the two part finale of You’re the Worst, and per usual, things got sloppy so I’ll just dive on in.

Gretchen wakes up in a hotel bed alone, calling out for Jimmy and  panicking when he’s no where to be found. After working through her tears, Gretchen stalks out, only to find Jimmy pulling up in the hotel roundabout with breakfast for the two of them. Gretchen breaks down, pissed that the PTSD Jimmy’s disappearance has caused her has made her so distrustful – he can’t even get breakfast without her freaking out. She tells Jimmy that no one fights for her, and it’s for that reason that she can’t be with him the way she wants to. Jimmy fights back though – he’s apologized and feels sick of Gretchen throwing it back in her face. Gretchen storms off, the two ending just as terribly as it’s began.

Gretchen makes it back home and is pleasantly surprised to find that Olivia has texted her to invite her to taco night. Linsday tells Gretchen that she’s going to have to make a decision, and that the damage she might cause Olivia by playing around isn’t fair. Gretchen explodes, claiming that for once, she’s putting herself first…for once though? Okay girl. 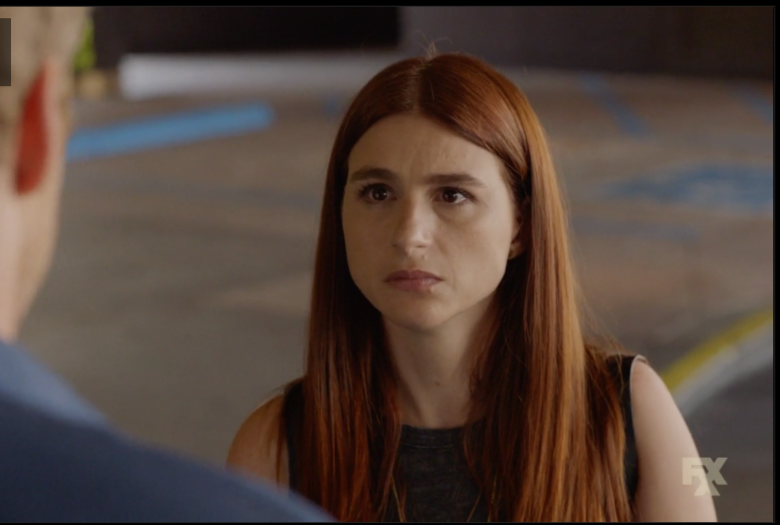 So, Lindsay shows up at Taco Night to “minimize the damage Gretcehn can do to her.” At the end of the night, Lindsay hides in Boone’s trash, telling Boone that he must break up with Gretchen because she might hurt Olivia. After Boone tries to assure Linsday that he knows what he’s getting into, Lindsay drops the bomb – Gretchen’s not over Jimmy. This prompts Boone to rush back to Gretchen and passionately propose that Gretchen moves in with him. She agrees.

Edgar isn’t coping with his split with Max very well,l fam.  Max blows Edgar off, claiming work has kept him MIA and that he doesn’t have much time to hang out. Instead of chucking his losses, Edgar follows Max to a dinner party (after Max said he’d be working late) . He finds Max hanging out with receptionist Dutch, convinced he’s replaced him. Max assures Edgar that he’s only hanging out with Dutch for work purposes and that they’ll continue their friendship in no time…

Spiraling in his own haze of emotional repression, every act is punctuated with Jimmy being…. Terrible Jimmy. From bothering innocent park goers to drinking in a near empty theatre alone, it’s clear that Jimmy’s struggling to cope with his emotions. With no one else to turn to, Jimmy calls Edgar who swoops in like the friend he’s always been for Jimmy. Jimmy tells Edgar that he’s been offered a multi-book deal, and plans on moving out of Los Angeles. While Edgar tries to be there for Jimmy, he tells him he’s used to people “going away.”

At his wits end, Edgar shows up at his boss, Doug’s door, demanding to know why he split him and Max up. Doug deflects, offering Edgar a promotion to be an on-set writer to a sketch happening in Downey, right now!

Part one of the finale wraps up with Gretchen sneaking out of Boone’s house, and Jimmy, about to flee, finding his red car on fire. They’re back folks. SMH. 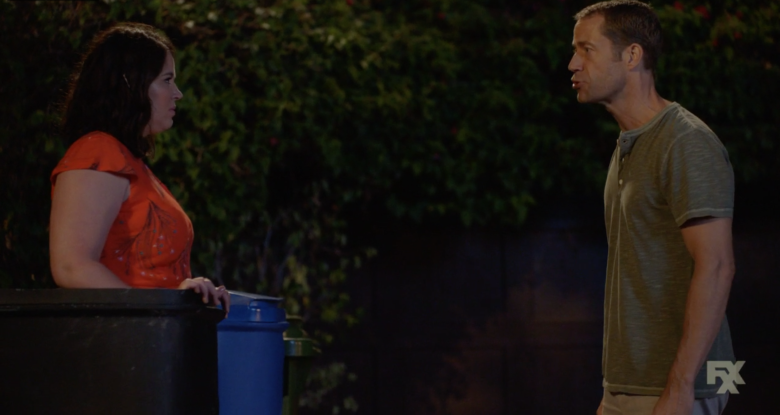 Um, “It’s Always Been This Way,”  certainly started out with a bang. Vernon, who’s been on the verge of a nervous breakdown all season, has fallen asleep on the surgery floor, killing a patient in the process.

Edgar returns home, complaining to Linsday that being an on-set writer seems to be more of a punishment than a promotion just as Vernon rushes into their home, running from the hospital cops and passing out on the couch.

In light of the murder thriller happening with Vernon, it was hard for me to remember the love story thing happening.  Jimmy picks up Gretchen in his burnt up car, and the two spend time driving and reconnecting.

So this epsidoe was all about confrontation. While Becca confronts Vernon about killing a patient (without malpractice insurance), Paul arrives to ask Lindsay for a letter of recommendation for an adoption agency. Meanwhile, Edgar arrives at Doug’s house where he finds Max and Dutch. Max admits that he told Doug he doesn’t want to work with Edgar anymore after Edgar triggered him. He’s a trash friend. Perhaps the worst confrontation is between Gretchen and Jimmy, when Gretchen admits that she’s moving in with Boone because “he asked” and was the one person who said he wanted her. Jimmy admits he’s planning on leaving to Cape Coral and just wanted to say goodbye.

Then, after all the confrontation comes the resolution. Linsday, now the “helper” figures out a solution to everyone’s problem: Paul will pay Becca and Venon to act as their surrogate, which helps Becca because she was the happiest when she was pregnant, and also helps Vernon because he can use the money to pay for the inevitable lawsuit coming from the death of his patient. Jimmy drops Gretchen off at Boone’s house, driving away into the night without another goodbye. Just as Gretchen settles into her new life, Jimmy storms into Boone’s house, declaring his love for Gretchen. Boone tries to drag Jimmy out, and Jimmy scrambles to get out an apology. The two argue over Boone’s shoulder, Gretchen telling Jimmy he confirmed that she’s unlovable. She snaps at Boone, who she believes only asked for her to move in because Lindsay asked her not to, and Jimmy for being… well Jimmy. At the end of the argument, Gretchen chooses, herself, walking out on them both.

Just kidding, she finds Jimmy down the road and hops into his car, choosing him as Olivia and Boone watch on.

Down the road, Gretchen proposes to herself for Jimmy. They’re getting married in October. 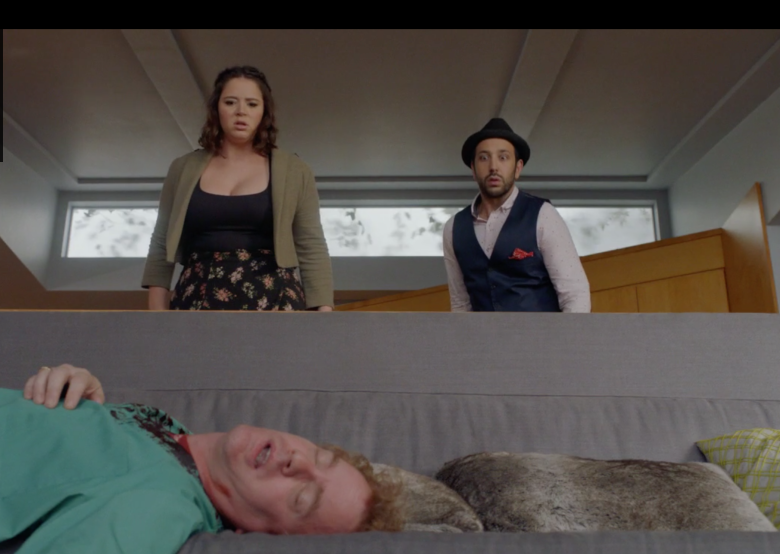 You know I, like a lot of other fans of the show, struggled a bit with season 4 over all. It’s pretty hard to break up an ensemble cast for most of the season, and even harder when the cat and mouse chase between the two leads slowly loses it’s excitement after a while (at least it did for me). Even though it was pretty inevitable that Gretchen and Jimmy would somehow get together, I will say that I did enjoy watching them attempt to really move on “this time” in the terrible way that only they can. I think that this season portrayed the idea of growth in a painfully realistic way this season, even if it didn’t stick with our two leads. Well, yes, they finally came to grips with their emotions, but they still chose to make the choice that they know is harmful. Call it immaturity, but I’ll call it “following your heart.”

But besides their relationship, I thought there were moments of introspection that  both Gretchen and Jimmy had. I would say the filler episode where Gretchen went back to her home town was actually one of my favorites, and a strong reason why this season wasn’t as bad as many people feel that it was. What do you do when you break up? You do random stuff, figure things out, your life s discombobulated for a while. That’s definitely the vibe I got this season. Did you think that after the breakup, these characters wouldn’t be a hot mess? Did you forget what show this is?

But no matter how you felt about this season, I think we’d all have to agree that this was a strong finale – particulary for Gretchen and Jimmy. Even though it was satisfying that the two got back together, Gretchen returning back to her roots of being a terrible person and ultimately abandoning Olivia was painful to watch, but I thought it was a strong choice to end the season.

If anything, I think Edgar didn’t get the justice he deserved in this finiale. After epsidoes of struggling with PTSD and finding someone to open up to, I thought he could’ve had a stronger resolution besides Jimmy telling him just to forget about Max. Maybe it’ll come, but we’ve set up a whole lot of emotional issues for Edgar that I wish we explored more.

So the wedding date’s in October, Gretchen’s got a sad little girl and a likely pissed off Boone someowhere in her past, and Jimmy’s got a new wife and the new pressure to learn to express his emotions correctly. I just heard that next season is their fifth and final season, and that could mean that Gretchen and Jimmy end up for better….or for worse. See what I did there?