As penultimate episodes go, “.exe” is quite a good bridge to the end but it is most definitely a bridge. PERSON OF INTEREST is only moderately serialized, so episodes without narrative closure are rare. Here, we’re given a lot of setup and plenty of moral hand-wringing but no real payoff. I presume that’s for the series finale next week. That said, the episode is thoroughly enjoyable, so my only complaint is that I can’t immediately cram the next one into my brain.

Three threads are running simultaneously in “.exe” and only mildly connect. All the bodies Fusco found earlier in the season that were killed by Samaritan are finally discovered and Fusco is faced with a Samaritan operative. I have no clue how any of this ties back into the “take down Samaritan” plot, since rehashing Samaritan’s crimes seems like it’s belaboring the point at this juncture. But it must be relevant somehow next week or they wouldn’t waste the time on it. That one I reserve judgment on. Shaw and John get a number that turns out to be Greer (aka “Head of Samaritan”) and their mission collides with Harold. Shaw and John are always fun action heroes and they don’t disappoint here, deadpan snarking while they eventually (inadvertently) saving Harold. But Harold of course is the main focus here, which is appropriate since last week was all about the team saving the world sans Harold. This week he gets his philosophy, and it’s fabulous. 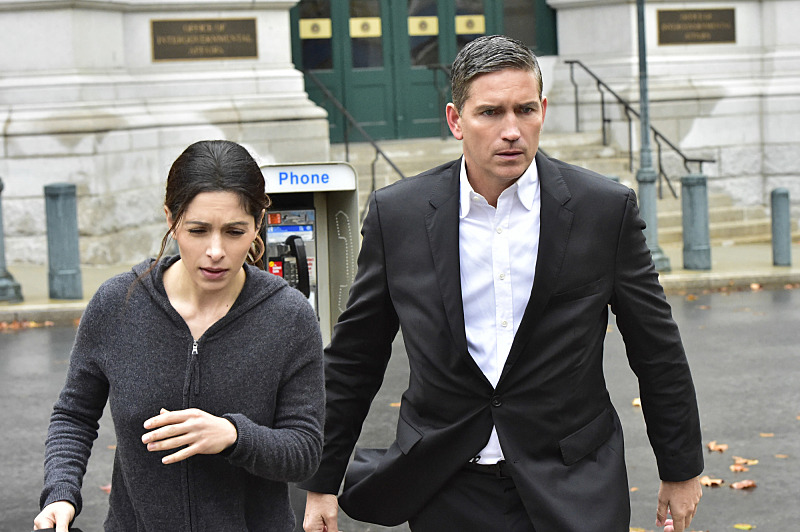 My favorite part, predictably, was the It’s a Wonderful Life-style Machine-less scenarios that the Machine runs to convince Harold that his course of action is just. They’re all perfect in warm-fuzzy, satisfying ways. Carter’s still alive, Fusco is an alcoholic booted from the force, Shaw is an unquestioning ruthless CIA operative whose partner is still alive, and John threw himself in the river in despair after his girlfriend left him because he was too “dark.” Of all the outcomes, John’s  strikes me as both most ridiculous and somehow most poignant. He’s a complete grey rock at this point which is why he’s so enjoyable to explore.  That his tamped down emotions would send him over the edge plays very true for me in a bizarre way. His ex-girlfriend Jessica was always the sliver of humanity from his past. In the Machine-less world he saved the girl, but lost her at the same time.

My favorite scenario is of course Root’s. I’m beginning to suspect Root might be my actual favorite character in this series (I’m slow on the uptake sometimes, hush.) When we first met her she was a sociopathic serial killer ardently devoted to the Machine. It makes perfect sense that she’d throw herself into loving Samaritan with as much abandon, but Samaritan—in no way altruistic or respectful of human life—would only enhance her sociopathy instead of humanizing her. Here’s my Person of Interest story: I 100% only watched this show because Amy Acker was in it. That Root turned out to be such a wonderful example of so many of my favorite character archetypes was a bonus. That the show itself is a weird, philosophical treatise on technology a la a 1950’s sci-fi novel is a serendipitous joy. That Root in a Machine-less world would be a misanthropic fanatic has all the more impact for me because I miss Amy Acker’s face. But more than that, I love that it’s Root’s potential fate that steels Harold’s resolve to go through with his virus plans. As rich as all of the relationships in this series are, Root and Harold is probably my favorite. They’re like the push-pull of viewing technology suspiciously v. optimistically. They come to love each other in a perfectly non-romantic, touching way that keeps them both human. Of course thinking of Root as a Samaritan mook would bolster Harold’s determination. Nothing could be more affecting. The Machine won over Root to Harold’s worldview, but then Root always served as the Machine’s voice even before she literally became her voice. I’m rambling, but the dynamics here are pleasing to me. As for Harold’s actual in-real-life plotline, his spy caper was fun but the majority of his plan feels overwrought. I’m fonder of his opportunities to constantly converse with the Machine about morality and probability than with his plans to plant this virus etc. Moreover, I do love Harold’s devotion to his moral principles and free will, but expounding them over and over again at grumpy Greer just lessens their impact for me. They’ve constantly hinted at how nefarious Samaritan is because, oo ah, it kills people who are “inefficiencies” and “inconvenient” but for me to believe Harold v. Greer is a heavyweight showdown I need to know what Samaritan is actually doing, you know? All in good time, I hope. But Greer talking about filters and humanity being awful is too vague for Harold’s insistence that humans are good and deserve a chance to change to carry as much weight as it should. I’m literally sitting here nitpicking moral arguments in a theory-heavy sci-fi show that by all rights should not exist. I’m going to stop now.

Small notes: I loved Shaw pawing at a copy of Sense and Sensibility earlier to foreshadow the “Dashwood.” Is that a thing from earlier in the series? I feel certain it was but I can’t remember. The other thing is that the wifi router John and Shaw are sent to find is Edward Snowden’s. This show was all low-key with its sci-fi premise for years until surprise! The NSA is legit spying on everyone illegally! Then Person of Interest had to ramp up the artificial intelligence angle so that it was still fiction. I adore that this has always been a pretty crazy sci-fi thing masquerading as normal and, as such, could make serious commentary on current events (as sci-fi should!) But this is legitimately the first time they’ve even referenced Snowden at all in the series. It’s amazing that he hasn’t come up before, but also weird. I’m now trying to cram all the pieces together and I’m not sure they fit. Was Snowden’s leak about the Machine? Obviously the NSA knew about it if Samaritan is housed in the building now. Etc. etc. I’m too tired to theorize at the moment. The reference is nice anyway.

I’ll see y’all back next week for one last jaunt with Person of Interest. Hopefully it’s a gigantic exclamation point to a really superb series and we can leave it in peace.