Welcome to the fall. In a bizarre turn of events that only CASUAL can rationalize, the show about casual relationships has indulged itself by morphing into a show about love. If anyone has been in “love,” whether it be a deep crush or actual, bonified, real love, they can tell they’ve done stupid things for it. One time, already late to a birthday party, I walked my now girlfriend fifty blocks back to her place because she didn’t want to spend the money on the subway and I emotionally could not let her walk back alone. Was it stupid? Sure. Did I miss the entirety of the party? Almost. Did it significantly alter my life? Of course not. But sometimes love makes us do things that DO significantly alter our life. So, when we open on a hesitant Leah, looking into the eyes of a calm, collected, Leon, we can only assume Leon is going to get his heart broken again. Instead, Leah proposes to him, with a live musical ensemble to back her up. Don’t worry, they’ve been going out for a solid seven weeks, so I’m sure this is going to go swimmingly.

As sarcastic as I want to be, the thing is, all signs point to Casual eating up their own crazy hype. What I mean is, consistently throughout this season, Casual has set up Valerie as the antithesis to the morality of the show. When Valerie is confused why Leah would propose to a man seven weeks into a new relationship, we probably should be on Valerie’s side. But this is the same person that coerced her sex-addicted boyfriend out of rehab, and tried to pit her half-brothers against each other for her affection. So, all signs point to, Valerie is wrong and this is a good marriage. Leon is well adjusted and Leah is not, but there’s no reason for us to think that these side characters will ever be enough of a plot to show their relationship falling apart. It’s not about them, it’s about how the other characters react to crazy news. Valerie acts poorly and it only gets worse. Alex on the other hand, uses this opportunity to grow. 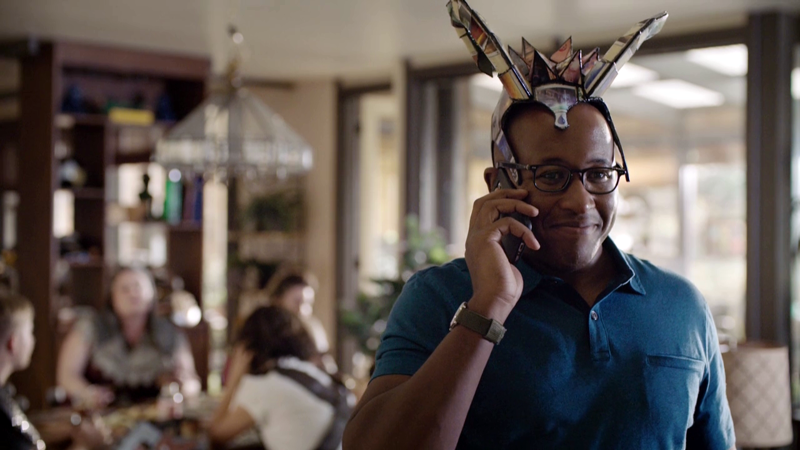 If there’s ever a character that represents humanity on this show, it’s usually Alex. An all-around good guy with some major flaws, Alex is surprised when Rae tells him that Leon is getting married. He then immediately assumes, “Oh, I’m going to be his best man, awesome,” but of course Leon has different plans. You see, Leon is a great friend and Alex is not. He often uses Leon to get to the bottom of his problems and then has little use for Leon in any other situation. Again, Alex isn’t a bad guy, he’s just a man of habit and twisted routine, and when he floats away from the script, he faces an existential crisis. So, when Leon denies Alex the opportunity, even going so far as to deny Alex ANY groomsman position, Alex steps into a mini existential crisis.

First he shows up at Judy’s house with two pints of ice cream, uninvited. Judy is creeped out because even though their relationship is going well, she has a kid and that comes before Alex or pints. Alex doesn’t put up a fight, he gives her one of the pints and shows himself out. Later he even apologizes to Judy by sending her a plant and giving her a welcomed phone call. What breaks Alex from his mini crisis is when he talks to his roommate/manic-sage-dream-girl Rae. Without even hesitating Rae says, “When you really care about somebody, you pack the Uhaul,” proving that she’s what happens when a book of proverbs wishes upon a star. Alex totally gets what this means and he goes about redecorating a room in his house to be used as an office for Leon, so Leon doesn’t have to keep working in a coffee shop. He’s touched and Alex learns to want for nothing in return.

At the engagement party, Alex and Valerie meet up and it’s awkward. The weird thing is it’s awkward in the same way you would greet someone you had sex with that you shouldn’t have had sex with. Welcome to the running theme of the season. Valerie is starting to fall out of lust with Jack, and actually ends up leaving him at the party when he refuses to listen to her every beckon call. Once you break through the sex and excitement you are left with two people who don’t love each other forced to act like they do during an event to celebrate two people who really do love each other, and for Valerie that is a hard pill to swallow. Meanwhile Laura is pushing her Juno narrative to new heights: hooking up with a pill-addicted, self-described vampire woman to drive her to Sacramento. All she needs is $100 bucks for gas and tolls and the like. She ends up not only selling her stuff to a wisecracking Craigslist Dude, but also the table that Valerie loves for a paltry $700. Not only that, but she gets a check from her father. With this she is going to try to find Casey in Sacramento and start a new, illegal, life. The plot is based in nothing but shock, and that’s frustrating. There really is no reason for Laura to chase after Casey, especially after last episode. But Laura wants what she wants, home-skillet.

The big takeaway here is that Valerie’s life has completely fallen apart. The man she seduced out of rehab is not the man she wants him to be, her brother won’t talk to her, her assistant has a better grasp on love and relationships than she does, her daughter is running away to start an illegal relationship with an older woman, and, maybe most importantly, she lost her favorite wooden table. As I said earlier, welcome to the fall.