This was a good episode of CASUAL. After going through a pretty poor spell these last few weeks, Casual managed to bounce back by finally addressing all of the elephants in the tiny, tiny room. We finally received a resolution to the horrible plotline that’s been Alex and Sarah. We finally got some real understanding behind Valerie and Jack’s relationship, and why everyone seems so invested in it. And we finally got real character growth from Laura. And although Casual does have to make a couple of reaches here and there, for the most part it all worked.

This entire crux of not only the episode but this entire season is delivered in the climax. You know, in hindsight I still don’t think I would say that the confusing or problematic emotional leaps that this show has made in the past are forgiven, but the climax this episode definitely put into a much better context. I think this is a general problem with our current TV era. Sometimes shows are thought of less as a TV show and more as a movie. It’s a dangerous course, because unless you’re literally Netflix, where everything is released day one, weeklong gaps between episodes doesn’t allow you to have a bad “setup” episode. It’s a growing problem, one that Casual suffered from, but if this episode is any indication, I would say we’re out of the “Setup Woods.”

Laura’s character has been the most steady throughout the show. She has no idea what she wants, and yet she’s so adamant that she does. So in one episode she kisses her girlfriend. But when her girlfriend starts becoming her “girlfriend,” Laura bucks. Hurtful words are exchanged and Laura sincerely tries to look within. She’s always been fascinated with Spencer because, to put it bluntly, he has terminal cancer. And Laura is afraid of commitment. In her mind she’s too young to be committed to anything, and she is right to an extent. So over time she starts getting closer to Spencer because Spencer allows her to do whatever they want without fear of commitment. And Spencer is a good guy, which makes the whole process much easier. But then there’s a switch. And what becomes an exercise in exploration becomes more concerned than that. All of a sudden instead of pursuing sex, Laura begins making breakfast for him and watching sappy teen movies involving terminal cancer (there are a lot of those!) And it becomes far less about exploration on a physical level, and much more of one at an emotional level. The sad thing is that when Spencer dies, Laura will inevitably be devastated, and it could reinforce her idea that emotional attachment is stupid. But even if it does, to be able to see this growth from her has been a pretty interesting ride. 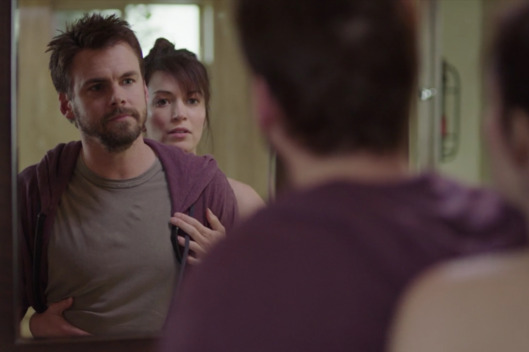 Laura’s plot, though important, takes a back seat to Valerie’s and Alex, who are indirectly at odds with each for much of the episode. Alex’s inexplicable downward spiral and mistreatment of Sarah has gotten to the point where he can’t deal with it anymore. He needs help. On the other side of the battle lines lies Valerie, who has convinced herself (with Jack’s help) that she needs to focus on her own problems and stop taking on others.  She makes an exception for her daughter, but outside of that everyone is on their own, including Alex.

When Alex tries to get Leon to help him, he instead tries to get Alex to understand how much of a mistake he’s made. He ruined his ex-girlfriend’s engagement, not because he wanted to be with her, but just so she wouldn’t be with his former boss. And on top of that he sleeps with her, still, despite the fact that he kind of feels nothing for her. It’s refreshing to see the show call Alex out through Leon. For a minute there I was beginning to think that Casual was going to portray Alex as the victim – but they don’t. In fact, no one is blameless, even Valerie.

Her and Jack lie and say that they’re on their honeymoon. They convince a couple and the concierge of this. They get sympathy from the couple and a free upgrade to the honeymoon suite from the concierge. Valerie likes Jack because Jack is the perfect romantic. He makes you think that the only thing that matters is the moment, which is so different than literally every aspect of Valerie’s life. It’s like when people say after a long day of work that they need to chill out. Well Jack is that thing you can do to chill out – literally. They have a lot of sex. A lot. Not much else is revealed between them though. They clearly have fun with each other and enjoy each other’s company. There is a constant question of how serious each of them are to each other, which gets addressed at a high school reunion that they crash. The couple from earlier ask them when they first fell in love. Jack immediately regales the rooftop date they had where Valerie told a rather dark story that really resonated with him. Valerie is really touched by this and it seems like in that moment, it’s not a game for her. She’s seriously into Jack.

Alex decides to take desperate measures. Unbeknownst to even Sarah, her parents come over to stay with Alex, hoping to convince Sarah to leave him. It’s all too much and so he decides to text Valerie from Laura’s phone, pretending to be her. When Valerie rushes over to the house assuming there’s an emergency with Laura, she’s incredibly angry to find she’s been duped. It’s here that everything is laid out. Alex tries to explain that he’s “helping” her, and Valerie can’t believe it until Alex says that he met with Jennifer. And Jack did the exact same thing to her. Valerie’s not special, she’s just one of many for Jack. It makes sense now why Jennifer was so hesitant before, and why she still harbors resentment. But when Valerie tells him that she doesn’t want to fix his problems anymore, Alex counters with some much more overarching problems. The fact that Valerie has been living in his house and more importantly that she slept with Alex’s girlfriend from Season One. He loved her, and Valerie destroyed that. Sarah overhears this all, and just like that, everything is out in the open and everyone is left to pick up their own pieces.

It’s hard to see where the show will go from here, but in this case that’s a good thing. We’ve finally reached a point of pure conflict where everyone is fending for their own self-interests and emotions, save for Laura. I can’t rationalize having a horse in this horse, but I tend to lean towards Alex, somewhat. If for nothing else, because he took Valerie in and she broke up his relationship. Alex doesn’t have anyone in his life who has unconditionally been there for him… except for Sarah, who he pushed away.