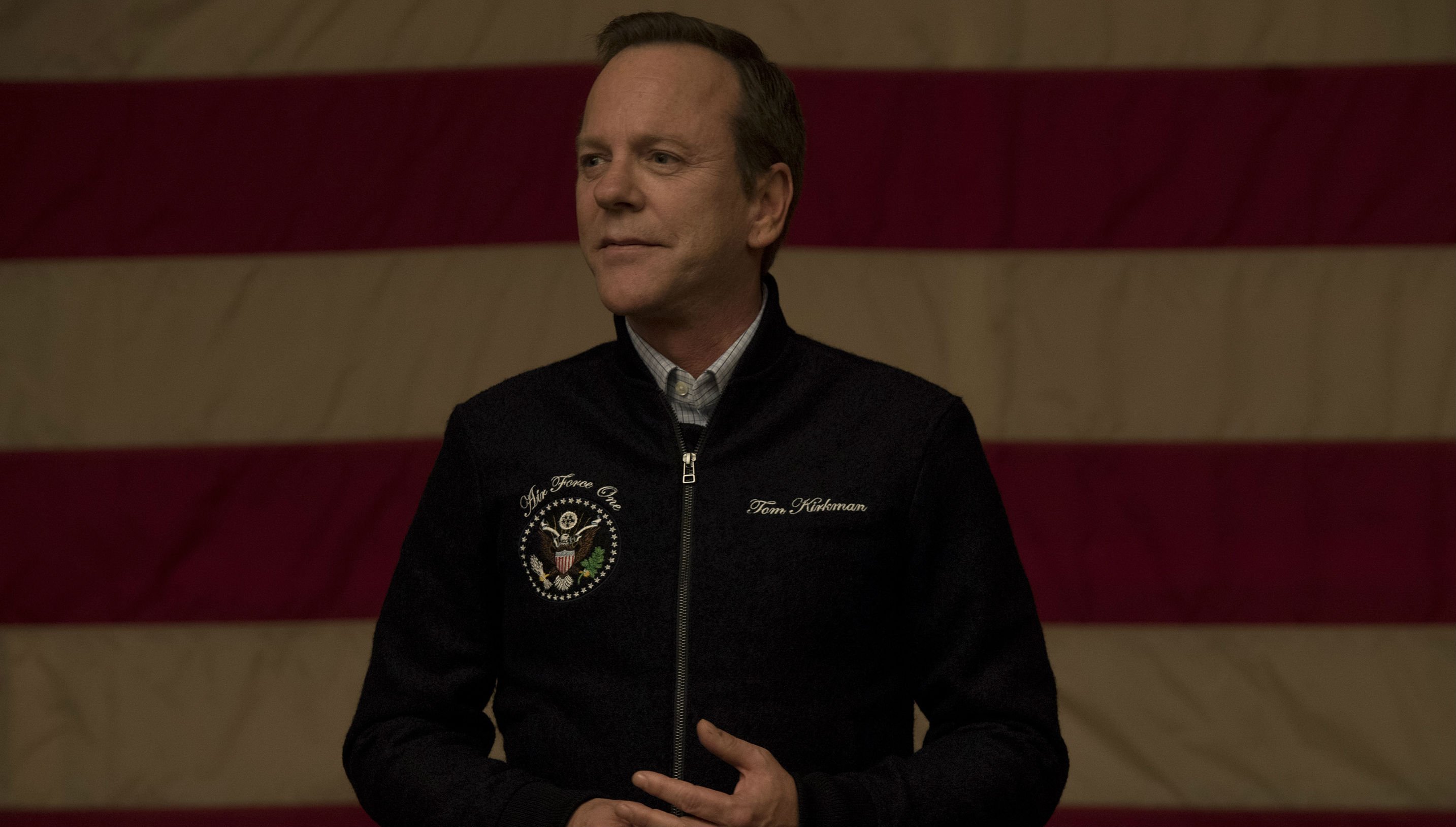 This week, President Kirkman ducks the press and flies to Afghanistan for a special visit with the troops there. Meanwhile at home, Seth is arrested for possession of illegal prescription drugs. And in a third plot, Lior is revealed to have a wife nobody has ever heard about, which surprisingly turns out to be potentially damaging for the White House. All this kept my interest, but we are given so little of what feels to be the most important plot of the season: who killed Eric Little, and who is setting up Alex? Even though those two things should logically be the most pressing thing to our characters, it feels like the writers were like “Eh, we need to save that stuff for a big mid-season finale, so… here’s some other random stuff!”

We open with Kirkman on Air Force One at night, sitting by himself. Somebody comes in to inform him that they are thirty miles out and will now be going dark. Nobody knows that the President has left D.C., much less that he is going to Afghanistan. How they managed to do that this day and age would have been interesting to see, but I guess we have to get into the story quickly. They land in Kabul and quickly arrive at a military base. The entire trip is just so that son of a gun Kirkman can show his gratitude to the troops. What a guy. He gives a speech and helps serve them all breakfast. 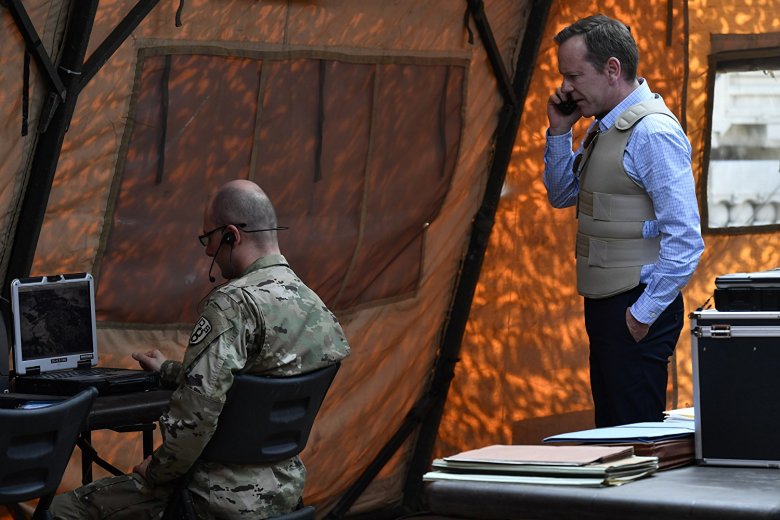 But soon he moves on to some pressing matters. Turns out Agent Welles has come to Afghanistan, too, and is working alongside CIA operative Kevin Dean. They brief the president about the lay of the land in Afghanistan–it is home to about twenty terrorist organizations, and much of the land is ruled by warlords. The two biggest and most powerful ones, Mullah Fayad and Mullah Bahri, are set to meet individually with President Kirkman. Kirkman at that point will decide which leader the U.S. will back. However, intelligence has come in that one of them is planning an attack on U.S. soil. They do not know which one, however. Kirkman will have to feel them out. And if he can’t “We can be responsible for our nation’s next 9/11,” he tells his crew.

Hold up, doesn’t this take place in a world where basically all the U.S. government was blown up like a year ago? Why are we referencing 9/11 and not that? Am I missing something?

At home, Seth is taking his little brother, who just nailed the MCAT exam, out for dinner, when he is pulled over by a police officer. He is soon arrested for having two-hundred pills in his car without a prescription. They are essentially nothing more than the pharmaceutical equivalent of caffeine. This could mean the end of his career if the press finds out. Emily benches him, and actually sets Lior to be Press Secretary (he’s not good at this, he has a knack for being immediately condescending). But Lior has his own issues–it turns out he has been married for six years and was misfiling his income taxes; he owes the government $826,000. Emily asks him to get an annulment and Lior agrees.

Kirkman meets with the two leaders. Bahri, “The Young One” as his people call him, talks about changing hearts and minds together. Using technology, they could start a new Arab Spring. Reduce extremism. And the U.S. could monitor him online. If they want a future, they can’t look to the past. Yadda yadda. Fayad, the older man, comes in and speaks about how his country is rooted in tradition, how Bahri is an infidel and a liar. Knowing that Kirkman met with his enemy Bahri, he storms out saying he’s not sure he can trust the U.S.

That’s when a suicide bomber takes out four soldiers, and operative Kevin Dean is kidnapped from a safe house outside Kabul. Which leader is responsible for this? Kirkman brings both leaders back in for an investigation to hear what they have to say, while Welles (accompanied by Kirkman’s faithful bodyguard Mike) set out to the safe house to try and hunt down Dean. Of course both leaders blame the other. Bahri says that Fayad is the one who has a chemical plant, a chemical that was used in the bombing. Fayad claims he manufactures the chemical for medical purposes and storms out. Meanwhile, Welles and Mike avoid a land mine in the road, exchange some gunfire with some bad guys, and eventually find Dean. Fairly anticlimactic. 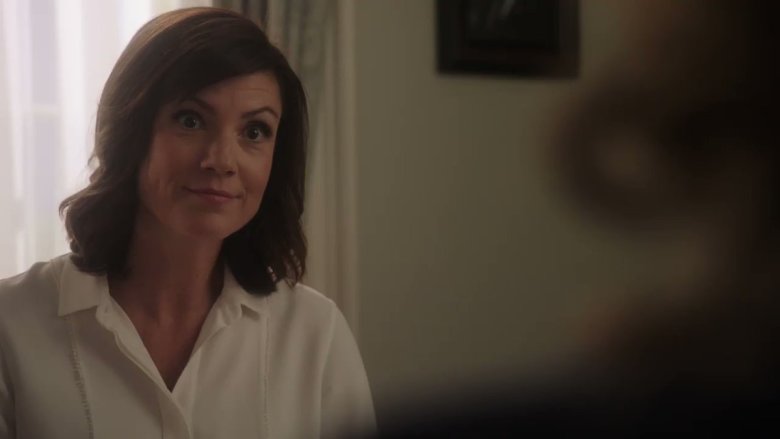 At home, Kendra gets Seth off the hook for the drugs as the arresting officer has fourteen illegal searches under his belt. And that annoying reporter Tiffany has figured out that Seth got arrested, then got out of a drug wrap. He asks her what she wants. She wants to know where the president is (she has also deduced that he is not really in the Oval Office). He tells her to give him twenty-four hours and he’ll give her an exclusive.

In Kabul, Kirkman eventually gets intelligence that it was in fact Bahri, The Young One, who sent the suicide bomber to the market, killing the four American soldiers. He invites him under the guise that he will be partnering with him, then tells him that he killed Americans and will never see sunlight again. Bad ass. He flies home the next day and on Air Force one he asks for the contact information for the families of the four men lost.

Overall, the episode held my attention, but everything was neatly squared away by the end, and I’m just waiting for the real meat of this season to be dealt with. On the winter finale next week, it should be.