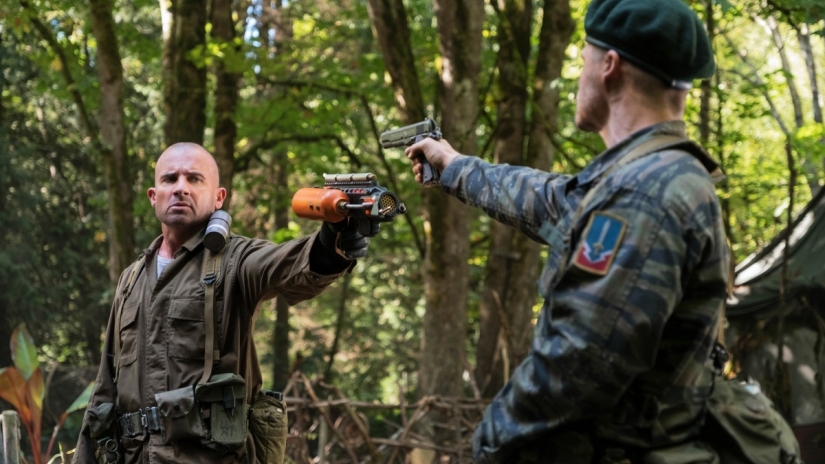 Have ya’ll ever cared about learning more about Mick and his family? Was learning about the Vietnam war the only part of your US History class you actually found interest in? Well, I’m out of teaser questions for you so just keep reading.

After last week’s battle with Darkh, Sara’s out for the count and in a Gideon induced coma, so the team is on their own this week. While Amaya copes with the fact that Kuasa is her granddaughter, and Jax urgently pesters Stein about his progress on separating Firestorm, the team finds an anachronism in 1967 Vietnam – the height of the Vietnam War — where a mysterious beast has been attacking US soldiers in the jungle. Once on the ground, the team splits up: Zari, Amaya, and Ray follow a young woman who promises to lead them to the monster in the jungle, and Mick and Nathan go off on their own way. When Nathan questions Mick on why he’s more jittery than usual, Mick begrudgingly lets him know that his father fought in the Vietnam War and he doesn’t want to run into him. Lo and behold, who comes gallivanting  through the jungle but Mick’s father, a carbon copy of Mick. After Nathan tries to convince Mick that connecting with his past is a good thing, Mick informs him that he let his father die back in the day – watched him burn to be exact (but I’m sure all of ya’ll comic book fans knew this already).

Meanwhile the search for the monster in the jungle gets weirder and weirder. Following the young woman, Zari, Amaya, and Nathan learn that she refers to it as Ong Tro Moi, and claims it isn’t a monster, but enlightenment. Mick, his father, and Nathan also stumble upon something strange when US Troops who appear to be in a trance attack them. Zari and the gang are led to a small camp, where US soldiers and Vietnam soldiers are living/working together, something that makes no damn sense. The young woman leads the group to the “monster’, who turns out to be a giant gorilla named Grodd who welcomes them to their kingdom. 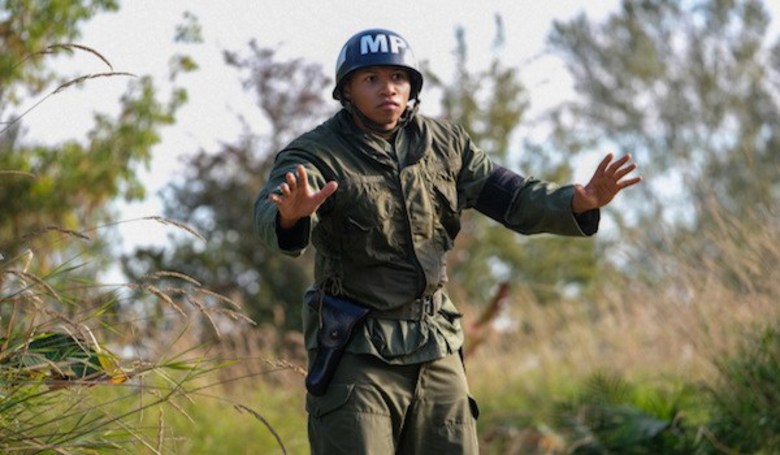 While Amaya treis to figure out a way to use Ray’s shrink gun to take care of Grodd, Mick connects with his father. It’s a sweet little moment where his Mick thanks his father for saving his life when the US Troops attacked them, and his father shows his humanity by showing Mick his girlfriend and swearing he’s going to make a better life for his family one day. This sends Mick into an existential crisis – seeing the humanity in his dad makes him feel guilty about letting his father burn to death, wishing it were him that had died.

The anachronism on the ground as grown to a level 10, where Stein and Jax learn that Grodd’s existence in the past has cause World War 3 with Russia. Zari struggles to go along with their plan when he learns that Grodd’s just a displaced mutant who will be jailed.

When Amaya goes after Grodd,, a powerful Grodd stops her showing her his true intentions. A montage of the horrors of war and general human life on earth allows Grodd to point out that humans suck, and that he’s not the true enemy. He shows her how he was experimented on, and how he’s not after revenge, but getting humans to achieve peace. Sometimes I wonder, why do bad guys always think total destruction equals peace? Well… to be fair, have you seen the state of the world? Is he really wrong – sorry.  Anyways.

Almost forgot to mention that Jaz learns that Stein isn’t as confident as he’d portrayed, and that splitting up Firestorm may be a bit of an issue.

So back on the ground, Zari learns that the young woman they’ve been following, Ang Lee, is about to assassinate President Johnson (who’s just landed on the island), on Grodd’s commands. Before Zari can talk Lee out of it, Lee’s mind is captured by Grodd, who takes Zari down.

Jax, sick of being on the ship, tells Stein that he’s going down without him. Jax is sick of waiting for Stein to figure out how to break apart Firestorm, and that he needs to learn how to be a hero without Stein. As Jax leaves, Stein looks a little salty, perhaps getting a taste of being FireStein made him regret his decision? 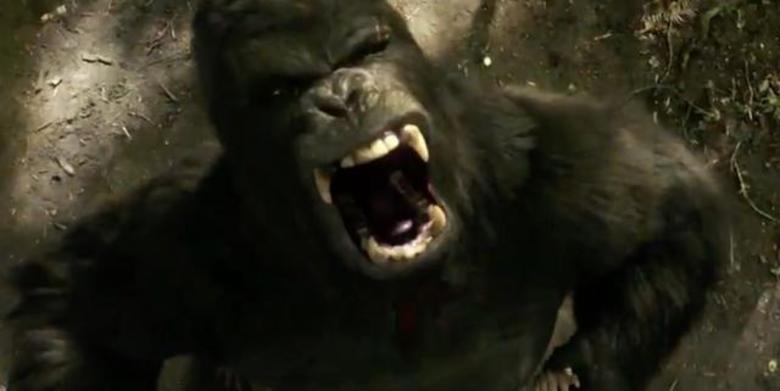 Out of weapons and chances, the team tries to reason with Grodd to get him and his camp to stop the assassination attempt on the President – which would start WW3. Amaya reaches out to Grodd, promising to take him home. When Grodd informs them he doesn’t want to go home, Amaya promises that they can take him to a time where he lived in peace. Activating her totem, Amaya is just about to make a connection with Grodd when Mick’s father and his team storm the encampment – guns toting.

Done listening to the team, Grodd let’s them know he wishes to annihilate all humans, and turn earth into a gorilla run planet. As Grodd goes after the Wave Rider, Nathan (who’s been turned by Mick’s father) and the rest of the team is captured. Having gained the trust of his father, Mick is able to talk his father down from killing the team, promising that if he does, the moment would burn in his mind forever.

Stuck on a minefield, Jax tries to lead the President back to safety. Stein struggles with getting the Wave Rider to safety when Grodd finds his way on the ship. As Stein tries to figure out how he can save the Wave Rider, a telepathically controlled Sara wakes up from her coma to attack Stein. Stein’s saved by Galileo ( or one of the geniuses he’s brought back from the past to help him crack Firestorm’s problem).

After troops descend on the Wave Rider to take Grodd away, Mick leaves his father without trying to change him for the better. Meanwhile, Grodd lands in Central City, where he meets Darkh, recruiting for his team. 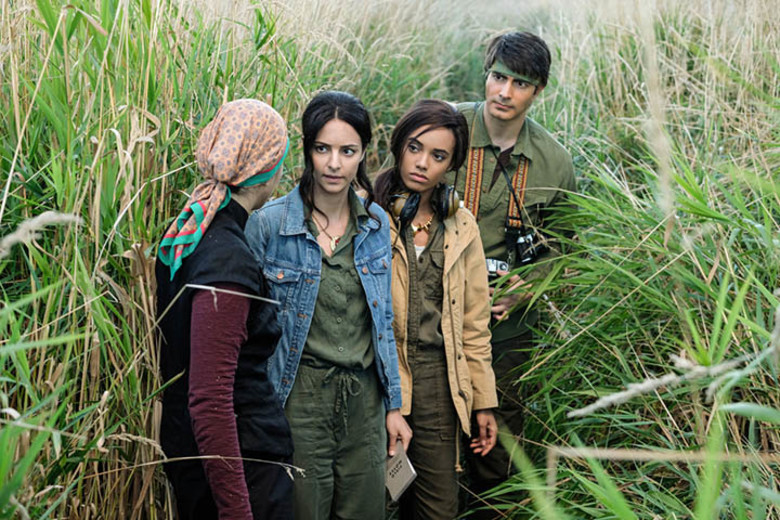 So I really enjoyed this episode of Legends, even if the connection to the larger season arc wasn’t necessarily clear from the jump. I can’t tell if it was the overall setting of the Vietnam War, or me trying to figure out wtf Grodd’s problem is, but I thought something about he pacing of this episode felt more explosive than the past episodes this season have been.

Can we also get a round of applause on the character development this episode? Seeing Mick interact with his father and feeling borderline suicidal was a great color to see for his character – especially since he’s been a background player for most of the season. Similarly, I feel that there will be some interesting tension brewing between Jax and Stein. Stein, who doesn’t seem as gung-ho to separate from Jax anymore, and Jax who’s ready to be his own man for once in his life.

Honestly, my main gripe about this episode was going to be the fact that we really don’t have time for any more filler episodes. I worried that, like last season, the resolution of the season arc was going to feel rushed or unfinished because they were going to jam pack it in the last two to three episodes. However, once we got to the very end of the episode and I realized Grodd’s joining Darhk’s team, I was pleasantly surprised. First of all, spending an entire episode on Grodd and learning about his general hate towards humankind sets up how great of an adversary he’ll be for the Legends now that he’s on Darkh’s team. Furthermore, so far all of the big bads up against the Legends this season actually possess the power to be unstoppable for the Legends. Really, the Legends only made it out of this one by the skin of their teeth (god that’s a terrible phrase). All this to say, I think it’s time that we as an audience are clued into what Darkh and co have in store for them. Why are all these powerful beings being recruited, and who is the evil spirit that seems to be gathering them all. While I loved learning about Mick’s backstory and I really really enjoy just watching the team, I think I’m ready to understand what the back half of the season has in store.