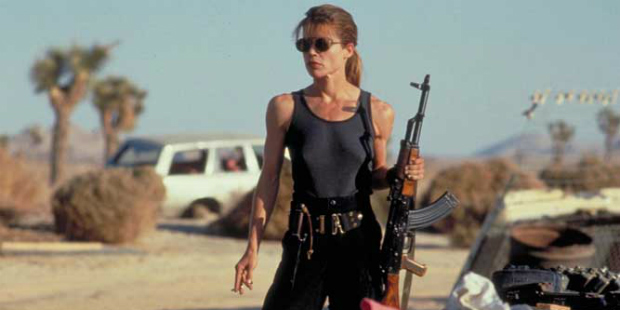 Original TERMINATOR star Linda Hamilton is returning to the franchise after saying “hasta la vista” 26 years ago. The 60-year-old actress played Sarah Connor in The Terminator and Terminator 2: Judgement Day. Sarah Connor is known for her transformation from a damsel in distress to a hardened badass mom, which has made the character a pop culture staple. It will be a Terminator reunion as Arnold Schwarzenegger and James Cameron are set to return.

Hamilton’s story isn’t the only news about iconic leading ladies returning this week. Jamie Lee Curtis confirmed she would be reprising her role as Laurie Strode in a 10th Halloween film after a 15-year absence. There have also been rumors that Sean Young has filmed secret scenes for Blade Runner 2049, after starring opposite Harrison Ford in the 1982 original. Harrison is a great example of a seasoned actor who continues to reprise famous roles. He returned to Star Wars in 2015’s The Force Awakens, Blade Runner 2049, and is currently working on another Indiana Jones film.

This proves to be exciting news as Hollywood tends to let male actors play action stars well over the age of 50, while females are tossed aside for a fresh young starlet. A 71-year-old Sylvester Stallone continues to appear as Rocky Balboa. Yet the studio decided to kill of Talia Shire’s Adrian offscreen at the age of 51, while Stallone has continued on. Yet when Sigourney Weaver was attempting to make a return as the iconic Ellen Ripley, the plan was discarded in favor of the Michael Fassbender-led prequels.

Carrie Fisher, who returned to her role as Princess Leia was a major draw for fans. Maybe her brief but important role in the latest trilogy was the spark for this latest trend?

What other actresses could get another chance as their beloved characters? Could we see Weaver in another Alien film? What if Michelle Pfeiffer came back to comic book films as the famous feline friend? Bruce Willis and Samuel L Jackson are returning for the sequel to Unbreakable in M. Night. Shyamalan’s Glass, why not bring Robin Wright back too?

There’s a major disconnect between men and women over 40, which should be discussed more in the film and tv industry. While getting Hamilton, Curtis, and potentially Young isn’t enough to fix the problem, it’s a good place to start.

Hamilton is represented by Innovative Artists.