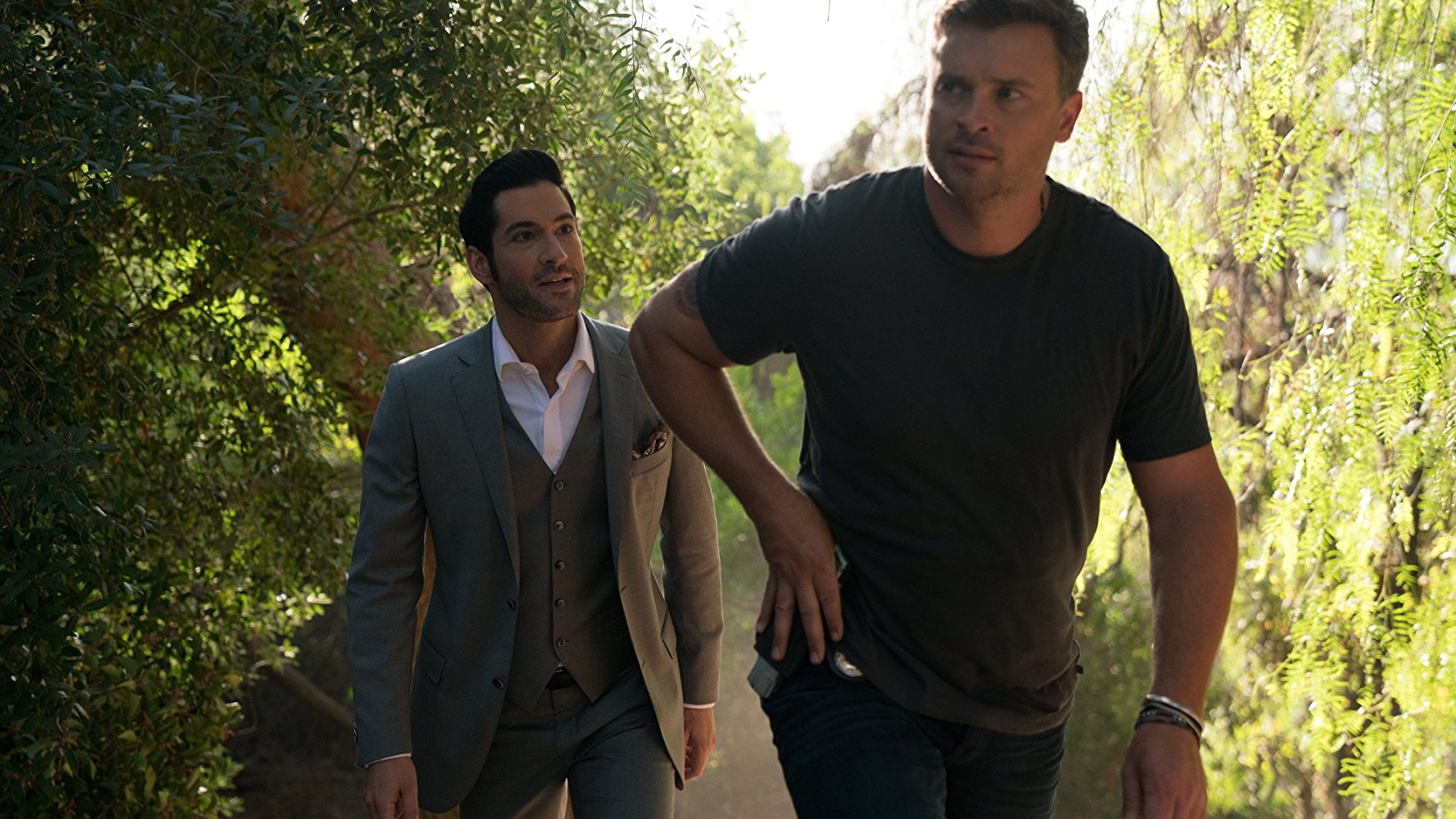 Lucifer wraps the Sinnerman story and unveils something much more interesting from “The Sin Bin.” We’ll call this a trick ending, it certainly tricked me. The Sinnerman story ended with a bit of a fizzle but opened an intriguing plot at the same time. As a plot, we’ll call it a fancy assist. Charlotte and Trixie drive a cute little subplot tonight. Det. Dan’s usual babysitter, a very nice elderly woman, passes away, forcing Dan to bring Trixie to work with him. It’s a bad time, he can’t hide all the crime scene photos or other psychologically damaging material in the office. No place for young Trixie.

Dan runs into Charlotte at the coffee shop, Trixie likes her immediately and Charlotte agrees to babysit. Charlotte takes Trixie to her new office which is boring but otherwise harmless. She doesn’t have custody of her own kids anymore and hasn’t been able to see them for months but Trixie gives her some pointers. By the time Dan returns to pick her up, they’re good friends, Trixie negotiates a dinner date for Dan and inspires Charlotte to call and set a visit with her kids. 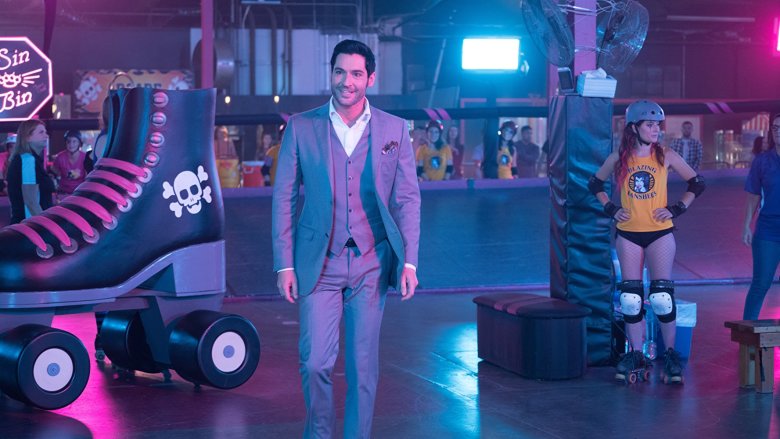 Sinnerman is in a good mood after carving out his own eyes, maybe it’s painkillers. Everyone else at LAPD is anxious. Lucifer still wants to question Sinnerman about his desires, but he doesn’t know how he’s going to accomplish that without Sinnerman’s eyes. To make matters worse, Lt. Pierce won’t let Lucifer in the interrogation room with him again. Chloe questions him about his motive for kidnapping Lucifer and killing his other victims. Ella rushes in when Sinnerman’s phone starts to ring. There is live footage of another victim chained to concrete at a location with rising water. She’s alive now, but won’t be for long.

The victim’s name is Maggie “The Slayer” Cole. Chloe recognizes a pin from her driver’s license photo, she plays on a local roller derby team. Chloe and Lucifer question a teammate she had an argument with, Helena Basket, but she has a solid alibi. Chloe and Lucifer check out her car, it’s rigged with a grenade and explodes right in front of them. They’re no closer to finding Sinnerman’s accomplice and Maggie needs help soon. Chloe agrees to sneak Sinnerman out of LAPD so Lucifer can do his interrogation trick. They plan a heist around a fake bomb threat. It’s a fun mini-Ocean’s type sequence. Lucifer and Chloe sneak Sinnerman into the bomb disposal van thinking they outsmarted Pierce, but he’s waiting in the driver’s seat. 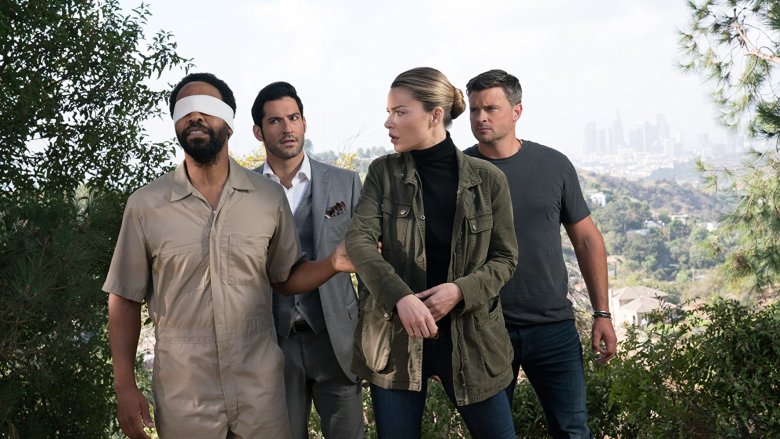 Pierce agrees this is the best way to save Maggie, it’s also a major piece to a huge twist. Sinnerman directs them through the woods until they hear Maggie’s screams. Chloe and Pierce rush to save her as her head goes under water. Pierce lifts the concrete weight while Chloe unchains her. They save her, but the accomplice makes off with Lucifer and Sinnerman. Pierce and Chloe try and get a description from Maggie and she mentions the grenade. Then, she confesses her whole role in the kidnapping. She wanted Sinnerman to help her advance on her roller derby team, which he did by killing her competition. The favor she owed him was kidnapping herself by the specs he provided. There’s no accomplice, Lucifer took Sinnerman himself, but where?

Lucifer takes Sinnerman to his hilltop property, a beautiful place. He lets Maze, the real professional, torture him for information. The only thing Maze learns is that Sinnerman is completely human, nothing demonic or divine about him. Lucifer decides to kill him but Maze won’t help, it’s against the rules for angels to kill humans. Lucifer finds killing Sinnerman harder than expected, he offers him a final meal but Sinnerman pushes Lucifer to get on with the execution. 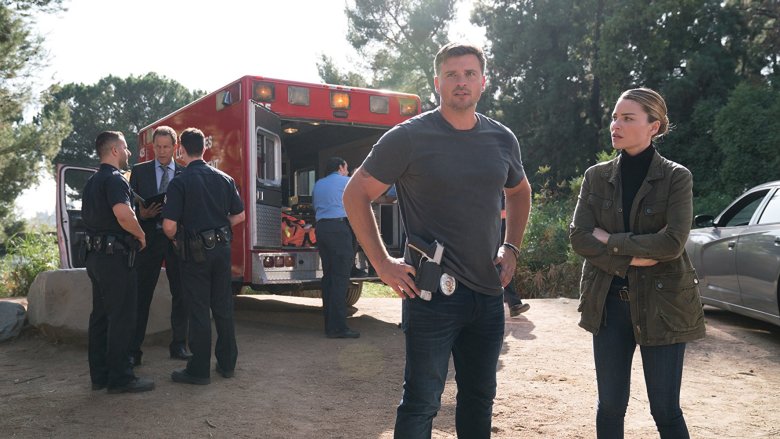 Lucifer decides Sinnerman is making it difficult by making it so easy, he’s been smiling for most of the episode. Even when Lucifer is about to cut his head off, he keeps pushing. That’s when Lucifer realizes Sinnerman has manipulated the whole abduction. Sinnerman actually says, “It has to be you.” Sinnerman grabs hold of Lucifer’s knife but Lucifer struggles for control to keep it away from him. Pierce rushes in, sees them struggling over the knife and shoots Sinnerman dead. Lucifer is glad he’s dead, but the mystery of is motive remains. Lt. Pierce tells his story and clears the shooting as quick as possible.

Lucifer goes back to LAPD and sifts through Sinnerman’s evidence box where he finds a torn photo of a young Sinnerman with another man’s arm around him, a man with a birthmark shaped the same as the tattoo on Lt. Pierce’s ten-gauge bicep. How cool is that? It gets better. Lucifer calls Pierce to Lux to confront him, if he’s the guy in the picture, he isn’t aging like a human. Pierce laughs off the idea of being immortal then Lucifer stabs him with a nasty long dagger. Pierce drops dead. Lucifer doesn’t panic, he pours himself a drink and waits. And waits. And keeps waiting but Pierce doesn’t move.

Then he does. Pierce bolts upright. He wheezes a little when he pulls the dagger out of his heart, but he’s definitely alive. Lucifer calls him out, God’s first murderer, Cain. As twists go, that one was worth it. He sits at the bar and asks Lucifer to pour him a drink too. I can’t wait to see where this one is going. Also, if Pierce is a legit cop, how awesome is it that he can’t be killed and knows how real murderers think?