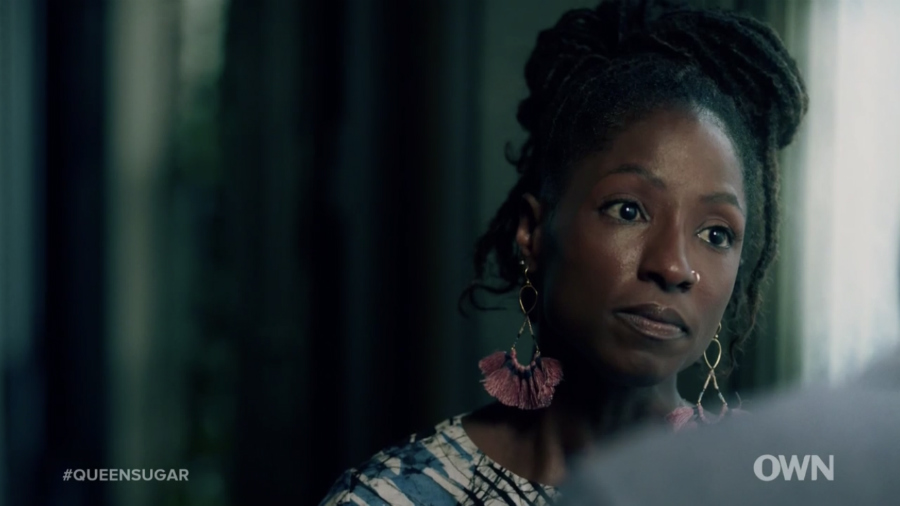 Nova is frightened, frightened of what could be with a man.  She runs away from conflict because she’s always thinking that conflict is the beginning of the end.  She does this with her new bae in a different episode, but she became self-aware and corrected it.  She opened her heart fully.

In Wednesday’s episode of “Queen Sugar”, she successfully runs away from him.  But she does it for the right reason.  Her new bae is a good man, as she says.  And he is.  But he is not in love with Nova.  He is in love with the potential of Nova, and as the self-aware woman, Nova recognizes it, communicates this to him, and she bounces.

He admits that he sees her on a “bigger [political] stage.”  She says that she doesn’t want to leave her home, and if he doesn’t know that, then he doesn’t know her.  Furthermore, she says that she shouldn’t have to lose herself in him if they are to be together.  He asks that they talk about it more, but she is firm in her beliefs.  Wow. What a brave woman.

This gets me wondering – how many people are with people who are in love with their potential?  Who is looking at his/her partner as his/her future self in the present?  Who knows that his/her partner is doing this but chooses to stay because a warm body is professing his/her love for him/her?  I would have to take the Nova route because life is too short to be in love with a future someone else who may never materialize.

Nova is heartbroken, but time heals all wounds.  I do hope that she will be courageous in opening her heart up again when the right person and the right time comes.  Love is not the thing that hurts.  It’s a person trying to practice love (and who fails) that hurts.

Davis and Charley failed at marriage.  Charley is trying to move on with Remy, but the reminder of the broken bond between her and Davis places a hiccup on their relationship.  She didn’t see it coming, but I did.

As Charley prepares for the Brown Sugar Festival, Landry, the Wight Walker himself, tries to sabotage it by not only pulling her permit for a prime piece of land, but he prevents trucks from arriving to her new location.  What more could go wrong?  In the midst of frustration, Charley seems to be defeated.  But Aunt Vi and Davis suggest a new plan, which Charley isn’t completely happy with, but she rolls with it.  It is a statement to Landry that he did not win – that although he is doing everything he can to sabotage the success of Queen Sugar (because it is a black-owned business), it continues to not work.  And guess what the secret sauce is?  Family.  A team.  A network of people who care.

Davis seems to be one of those people.  I believe he loves Charley, but he is in love with the idea of her.  She is beautiful.  Self-aware.  Smart.  Loving.  Aggressive.  And pleasant.  Who wouldn’t want all of those things in a potential mate?

But I think Charley was actually in love with him.  His flaws.  His mistakes.  His shortcomings.  And all the good things, too.

Davis’ help with the festival impressed her, and I think she had googly-eyes for him for a split second, but her head kicked in.  She had been down that road with him, and she has years of receipts on him not being the one for her.  Exes are exes for a reason, and guess what?  The same problems you had in a relationship with an ex will be the same problems you encounter again.  People really don’t change that much, especially when you’re in the 40+ club.

So, Charley lets him know that she is thankful for his help, but she’s not interested in anything else.  Davis says that his current bae isn’t really anything serious, and Charley bossed-ly says, “But Remy is.”  I wanted to throw a shoe at the TV.

Davis, did you really think some assistance with an amateur festival would get you back in good with your baby mama? Nah, bruh.  This is Charley Bordelon.

Life is a little easier and prettier for Darla and Ralph Angel.  They are excited to get married, and I am so excited for them.  They are such a beautiful couple.  They love each other so much, and they grow in love with each other every day.  This is rare.  And this is something that should be celebrated in front of their family and friends.  Thank God they are deciding to do a formal wedding…at Aunt Vi’s.  What would they do without her?

Life is too short in “Queen Sugar.”  The Bordelon ladies are living with open hearts, but they’re guarding them as well.  I look forward to the tough and beautiful conversations I have grown to love from this series.