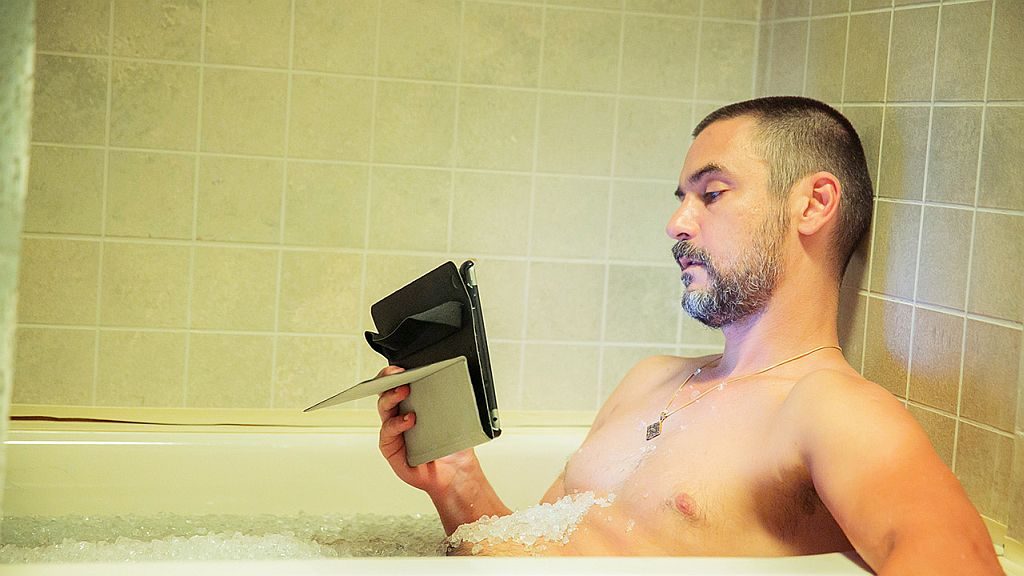 This week’s episode of Room 104, the anthology series from HBO and the Duplass Brothers, debuts with a title, white letters over black, establishing a few key plot points: Boris Karlovy moved from Croatia to Russia to become a pro tennis player. By age 17, he rose to #14 in the world. He was the future of tennis.

We open on a bleaker present.

Boris (Konstantyn Lavysh), smoking a cigarette enters Room 104 late at night, and starts drunkenly dancing to some ’80s Europop, He strips from his warm-up sweats into his playing gear, shorts and a slick Nike shirt. The festive Christmas wreath on the door tips us off to the season during which this episode transpires.

For the second time in three episodes, someone falls and badly slams their head against the wooden nightstand separating the two beds in Room 104.

Boris farts, then unwraps a bandaged knee, to reveal red bruises. He massages the knee, and starts lecturing at himself in front of the mirror. He injects himself with a cortisone shot.

He pees out the side of an ice tub. I include these incidental physical details because the episode elected to do the same. In both my review and “Boris,” these moments of physical excretion are superfluous and crude. Boris vomits later, and that actually is a moment that carries some emotional heft. The vomiting is totally justified in the context of the story. The urinating and gas, however, were a bridge too far.

In the bathroom, he sees a Santa Claus costume hung up against the bathroom door. He dons the gear and begins monologuing (wearing only the Santa costume, going bottomless) into the mirror. He then watches a brutal 2008 tennis injury in Monte Carlo on his iPad.

He rants at his imagined coach, he rants at “Kimmy,” an (imagined?) girlfriend, constructed out of pillows, a pair of panties and a hat that reads “Oklahoma.”

A maid, Rose (Veronica Falcon), knocks at the door, informs him that there have been complaints of cigarette smoke. Boris offers to pay her $300 to chat. And puts on some pants. Rose agrees. She apologizes for leaving the Santa Claus suit, she got distracted while cleaning the room before Boris arrived by a phone call from her son.

Boris asks her what the one thing she wants most in life — her green card, she responds. Rose, an illegal Mexican immigrant, lives in constant fear of being separated from her son, Jesus. She asks Boris what he does. Boris explains that in Russia he is famous, he’s a renowned tennis player. He played a tournament today, he says (though he looks out of shape). He loses “all the time,” Boris tells her. He let everybody down. He sobs, then rants incoherently in front of Rose. Now we’ll pay off that vomiting tease I gave you earlier, because it is here that Boris hurls into the toilet.

Boris recalls the great Croatian-Serbian war, as televised images flash before his eyes. He passes out. Boris awakens to Rose cleaning him in the tub, she explains that he was blackout-drunk last night. His uncle, he explains, trained him from the time he was five years old. He was six when the war broke out and her had to move to Russia; he remains traumatized by what transpired there. Rose offers him a sympathetic ear as he waxes rhapsodic about this and the dream he subsequently had in his drunken stupor overnight: that he was taking the Santa Claus suit out for a spin, handing out toys to children.

Edgar (Biff Wiff — yes, that’s how the performer is credited, and yes, it’s a real person), the Santa Claus suit wearer, forgot his Santa suit the night before, so he comes by the room to retrieve it. Rose tries to convince Edgar to sell the suit to Boris for the $300 Boris had offered her, but Edgar demurs. Boris, in his most mature moment of the episode, acquiesces to Edgar’s set and relinquishes the Santa gear to Edgar who, it must be said, looks like he makes for an amazing mall Santa (again, just scroll through Biff Wiff’s IMDb page imagery if you don’t want to take my word for it).

Boris gives Rose his tennis gear to give to her son, as a token of his appreciation for her being a borderline-therapist and helping him recover from his drunken stupor. She smiles and awkwardly leaves. He discovers that Rose left the $300 on his nightstand. Boris lies on the bed next to what once was “Kimmy,” removes the hat and sleeps on the pillow that had been her head.

“Boris,” directed by Chad Hartigan and written by Ross Partridge, has its heart in the right place, and has a cogent beginning, middle and end, which is more than one could say about every episode thus far during Room 104‘s erratic first season. The moment of connection between Boris and Rose felt quick, almost brushed over, sandwiched in between a lot of set-up content establishing Boris’s failings. I wanted more of them, and less of just him.