We start our story this week with Reed Diamond, our good old Nazi back so soon. His name is Dr. Whitehall (wait, this guy? Am I going to have to look up literally everyone from now on?) and he’s busy brainwashing a loyal S.H.I.E.L.D. agent, dropping the ominous phrase “compliance will be rewarded.” I knew that would be important!

Cut to an adorable montage of adorable Simmons getting ready for work set to a cheery song called “God Help the Girl” with lyrics that hint at something darker going on here. She heads into work, a giant Hydra logo looming on the wall beside her. Wait… all this brainwashing… have you brainwashed my girl?

And now, finally, all that season one drudgery pays off. One of those Monster of the Week characters makes his return, after being conveniently locked away by S.H.I.E.L.D. to protect himself and others. Donnie Gill (this fella; I missed that the first time around) the brilliant student who Fitz and Simmons helped at S.H.I.EL.D. Academy and who gained the power of an icy touch in a technological accident, is the subject of Simmons’ Hydra DNA sampling. Donnie is hiding out in Marrakesh where freezing people in anger causes something of a stir. Hydra agents find him and he runs, terrified, turning people and things into ice in his wake.

Simmons heads home to find an intruder in her apartment. Gun at the ready (when did she learn to use a gun?) she whips around the corner to find Coulson. “Did you think I wouldn’t find out?” he says (as he’s said to us fifty times in the commercials leading up to this week.) What wouldn’t he find out about? That she’s a Hydra agent? That she’s betrayed all of her friends and loved ones? No, actually, he wouldn’t find out about her pitifully stocked fridge. He’s brought her a huge cache of wonderfully healthy food and cooks it up for her while she debriefs. That’s right–our girl has gone undercover in Hydra. Simmons! The worst liar in the history of lying who once shot a superior point blank with a stun gun in a panic! Obviously we’ve all grown a lot since then. Simmons tells him about her job woes, stuck forever in the pool of menial science laborers in the lower echelons of Hydra. She also gives him the head’s up about Donnie Gill. “So how is everyone?” Simmons finally asked. “Fitz is okay, he’s hanging in there,” says Coulson. Ouch, Coulson, direct hit much? 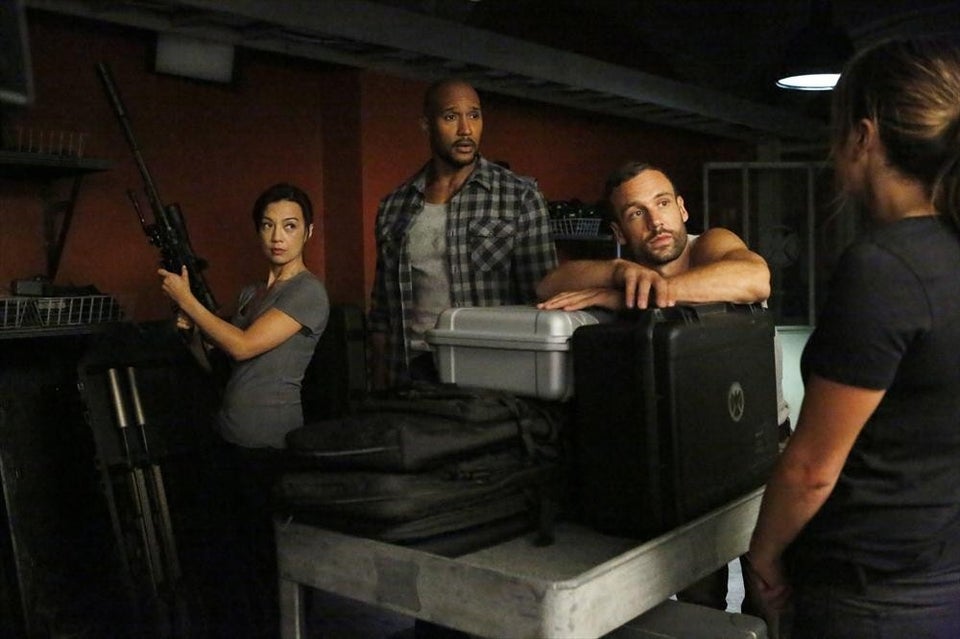 Coulson takes his info back to HQ, mobilizing the team to get to Donnie Gill before Hydra can. Fitz works himself into a frenzy trying to be helpful. It was Fitz who knew Donnie Gill the best, after all. Shouldn’t he be more central to this mission? Mack continues to help Fitz sift through words until he finds the ones he’s looking for. Skye gets sent to see “the Asset” to glean more information for their mission. I don’t know, guys–I don’t think that code name is vague enough. In a typical turn for me, I am completely on board with Skye and Ward’s screwed up relationship in a way I never was when it was remotely normal. Ward explains yet again that his loyalties were to Garrett, not Hydra, but that he knows all too well how Hydra works. If they approach someone with powers (a “Gifted”) who refuses to join them they simply kill them. Donnie Gill, it seems, was taught plenty of new tricks in his time in the Sandbox, and Skye astutely asks whether it was S.H.I.E.L.D. or Hydra that did the teaching.

Simmons is summoned by Hydra security and grilled about the lies she’s telling. Which sets of lies are we talking here? Nothing so serious–they’re just angry that she didn’t say she knew Gill. She deftly navigates the interrogation with a series of half-truths the way Coulson suggested. “My loyalties are with science,” she says. This, apparently, isn’t enough for Hydra who needs unswerving devotion like a psychotically possessive boyfriend. Her loyalties must be tested. Simmons is suited up and sent out on the mission to retrieve a thoroughly unhinged Gill who wants nothing to do with Hydra. But guess what other ragtag team of misfits is heading out on a mission to retrieve Gill! All lines converge on the ship he’s commandeered.

Head!Simmons tries to talk Fitz out of going to see what Coulson is keeping from him in the basement but he resolutely tells her that she doesn’t exist. He then charges downstairs, finds Ward, and launches into the most amazingly true-to-life panic attack I’ve ever seen on TV. Bless you, De Caestecker. Ward explains that he didn’t want to hurt Fitz and Simmons (or as the imagery in that episode so vividly demonstrates: he didn’t want to shoot his puppy–well, you can’t say Ward doesn’t feel affection for people, even if it is warped.) “I gave you a fighting chance to find a way out like you always do. Like you did,” says Ward. I seem to recall a previous Fitz meltdown related to Ward’s loyalties. I don’t think he’s going to fall for it, there, Ward. Sure enough, Fitz turns Ward’s oxygen way down to show him what it feels like. Uuuuh, Fitz, we sort of need the information Ward has in there. The thing is I’m never sure quite how unhinged Fitz has become. His brain doesn’t work the way he’s used to anymore, Simmons is gone, and he’s told his hallucination that she’s not there. Now throw Ward in his lap? (De Caestecker kills it. It’s not just that Fitz is “damaged” it’s that he’s so well played.) Ward, understandably, flips out and starts shouting about the team not knowing what they’re in for with respect to Donnie Gill. Say what now? 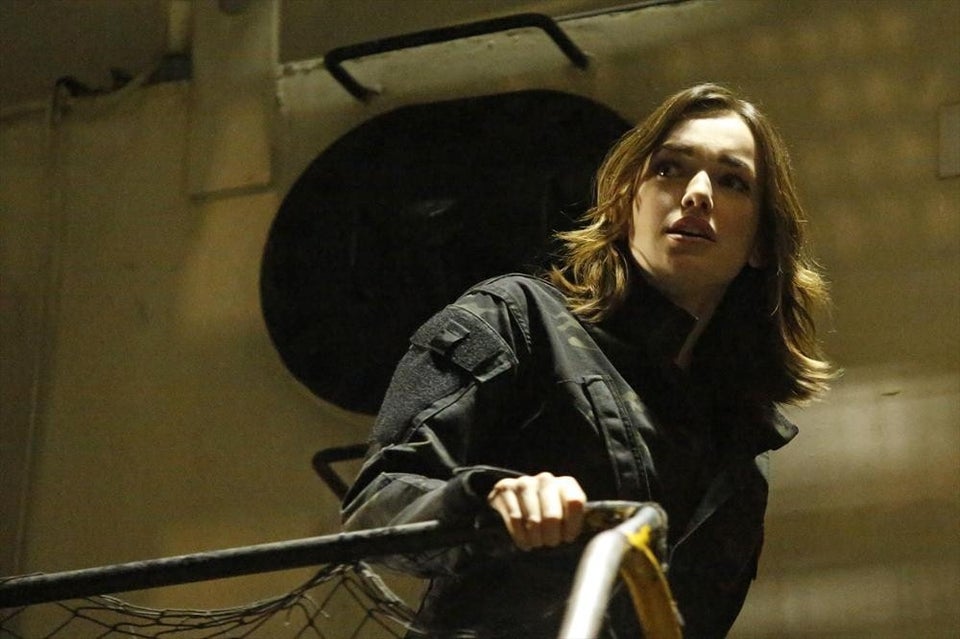 Apparently what made the Sandbox so hellish when S.H.I.E.L.D. fell was that a brainwashed Donnie Gill took it for Hydra all by himself. This is the person we’ve shut in a boat with dear Simmons–Simmons who has Hunter’s sniper sights on her back as we speak! Not cool, dude! Simmons repeats word-for-word the creepy trigger phrase that the Hydra lackey tells her and Donnie goes still.

May, who actually knows Simmons is undercover, spots her, shoots Hunter, and everyone runs in a variety of directions. Simmons slams straight back into the Hydra folks who brought her here in the first place. Gill, giving chase, runs into the Hydra folks too and his trigger phrase is completed, falling back under Hydra control. The Hydra lackey takes him above deck and orders him to freeze the entire ship with Hunter and May inside. Skye shoots him, spotting Simmons in the process, and Gill flips overboard, sinking down to a watery grave.

After the mission, May finds Skye sitting in the old science-y part of the Bus worrying over Simmons. I’m with ya girl. “It reminds me of before” Skye says. Strange how those happy days were so frickin’ boring to sit through, but seem so golden now. And they still haven’t found Donnie Gill’s body (do I sense a Marvel death?). May is checking up on her student, finding Skye’s reaction to shooting Donnie Gill to be satisfactory. Skye’s special little heart rate monitor never went over 61. Skye is in much better shape than I am right now.

Coulson finally comes clean with Fitz about both Ward being in the basement and where exactly Simmons has gone. “Did she want to leave?” asks Fitz. Coulson’s non-answer is kind of an answer. But hey, I have a long memory where favorites are concerned, and Coulson said she thought her leaving would help him to get better. I’m gonna need some more information.

Simmons’ performance with Donnie Gill has earned the trust of Hydra’s upper management, and they offer her a spot doing actual brain work in their upstairs research department. And if she turns out to be untrustworthy? Well, they’ll just brainwash her into “compliance.” (What a marvelous choice of words for a mind control catchphrase.)

Skye heads down to see Ward one more time, and he assures her that everything he ever did he did of his own free will. Something in his refusal to hide behind Hydra’s brainwashing makes me love him even more. Ward, please stick around forever being brutally honest and stalkerish in the basement. And then he drops the bombshell, teasing Skye with the knowledge that her father’s alive and looking for her. She keeps her cool until she makes it into the hallway. Then she checks her heart rate monitor as it skyrockets.

While rudely mislead by episode previews, “Making Friends and Influencing People” provided just as much closure with respect to Simmons’ involvement with Hydra as anything the hype suggested. It proved that the series can maintain not only the continuum of the larger Marvel Cinematic Universe, but that it willfully remembers the characters and plot threads it left hanging a season ago which I very much appreciate. The episode solved the mystery of who, what, where, and how everyone is and made sure I was still on board through any possible lulls in the future. It also proved that I’ve been right in my long-standing refusal to watch episode previews so as not to be spoiled or (even worse) accrue false expectations.

So, now that we’re all accounted for, we can proceed.