Tweetable Takeaway: A new year brings new vitality to the show, coming back with a fresh perspective and all new laughs by the bucket.
Tweet

Now that December has passed and the hullaballoo of the holidays has re-reeled for another eleven months, it’s time for a new year, a new attitude, and, certainly for the folks over on BLACK-ISH, a new lease on life. After a gradual, yet sizable slump, that thankfully plateaued just before Christmas, ABC has revived its freshman series and things are feeling fresher than ever. Dare I say it, the show is showing potential to be a classic in the sitcom canon. With a tight, focused storyline, comedic actors hitting major stride, and a fresh, quirky batch of jokes, “Law of Attraction” shows that it’s never too late to save a sinking ship. Even if by “sinking” I mean its bow is maybe a few feet underwater.

While the general concept of the Law of Attraction, from which the episode gets its name, is loosely defined at best, if even somewhat misunderstood by the writers, the premise serves a pretty rich well for drama amongst the Johnsons – when an all-around butthead cuts ahead of Dre and Rainbow in a valet line, causing Dre to sheepishly recoil in the face of confrontation, Rainbow maybe, sort of, kind of tacitly loses respect for him as a man. Because as much as we’d love to believe we’ve bucked our caveman-ness as an evolved species, some of us are still stuck in that hunter-gatherer era when valiant bravery still proves most appealing. But, when Dre’s bravado is knocked down a peg, Rainbow then steps in as the man of the house, finding herself hanging flat-screen TVs and flipping medium rare porterhouses on the grill. Being an honorable man and superlative provider for his wife and family (though not the exclusive breadwinner), this role-reversal majorly sticks in Dre’s craw. And while another role-reversal story might seem like a bit of a hack plotline, given that’s become a pretty predictable devise in TV, in the hands of these immensely talented comedic actors, it’s very funny and fresh. 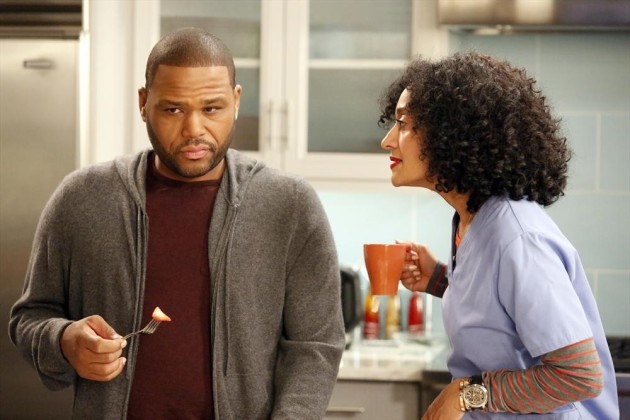 Meanwhile, Dre’s mother, Ruby, is back. And while she may have proven to be an absolute snooze-fest in previous episodes, she’s finding a much more compelling edge here. And, not to bury the lead, Laurence Fishburne’s rendition of Pops makes its distinguished return this week. And he’s bringing his usual crusty, no-holds-barred, Scandal-watching antics with him. Notably, this is the first time the two have been featured at the same time. And while they’re ceaselessly at each other’s throats, predictably, their relationship finds itself anew. Pops’ no-nonsense swagger can’t help but knock Ruby off her feet all over again. But given their history of vicious fighting, Dre is very reluctant to accept the renewed romance. In what might be one of the funniest cutaway sequences of any show ever, he recalls his eighth birthday when Ruby blew up Pops’ car and got carted off by the police, cackling and donning a pointy party hat amidst the flames. But the former-spouse love train is leaving the station, whether Dre tries to stop it or not.

The Pops-Ruby dynamic feels comfortable for the respective actors, who do well together, and has a caustic charm, but, as with everything else to do with Ruby, it’s not pushed to its first potential. Underplaying drama should be the absolute last impulse this show should worry about, given its history and self-proclaimed envelope pushing. But with this being the first outing with the two titans, a somewhat understated give-and-take is a passable offense.

But trouble with Mom and Dad is the least of Dre’s worries, as the hapless, emasculated hero is ruthlessly trying to redeem his status as Rainbow’s main man by trotting around with his wife in some rough neighborhoods. But any efforts to reclaim the testosterone crown result in being chased by dogs named Pickles and getting cash returned from good Samaritans. It isn’t until Dre confronts Pops and gives him an ultimatum, telling him to stop dating his mom or to get out of his house, that Pops concedes to Dre’s authority, head hung low. And so, Rainbow is happy with her strong man again, and after Pops’ embarrassing defeat, his ties with Ruby are once again severed.

What makes “Law of Attraction” so compelling is how tight and pithy the comedic timing is here. Which is mostly if not completely to do with the talented actors involved, who breathe charm and humor into every line. At the risk of sounding wishy-washy, this week’s show had a certain je ne sais quoi that boosted an otherwise “eh” plotline to especially high ranks. And for the first time, Black-ish upstaged its heavyweight lead-in series, Modern Family, whose material is noticeably lagging this season. But while Modern Family, arguably, begins to wind down, Black-ish is showing new promise to be a worthy successor. It might not quite rival the Emmy darling’s material when it was at its best, at least not yet, but all the right elements were aligned this week. And it’s a very encouraging time for the show.

What may start becoming problematic is the very inconsistent dedication to race commentary in the show. While race, by nature, will always be a component in the storylines, it’s still not clear how culturally incisive the material is aiming to be. And with such a ripe opportunity to educate such a wide audience about race/class issues, it seems lazy to settle for being just a pretty good sitcom. Great jokes will serve as a solid buoy in between moments of higher meaning, but I fear the show will eventually scrap its own politically charged concept by the season’s end.

But, lest I’m getting ahead of myself, it’s safe to say that no one should have to hunt for reasons to watch the next episode of Black-ish. With zippy material like this, it’s a bit of a no-brainer.