Tweetable Takeaway: Supernatural has too many plot-irons in the fire, but season 10 might finally be finding direction.
Tweet

After I griped about a lack of arc for a few weeks, SUPERNATURAL piled on six plots at once which left the entire episode simultaneously disjointed and rushed. We had: Cole the guy who hates Dean Winchester, Rowena the witch (who was plot teased just after Dean was un-demonized), Cas and Hannah’s weird relationship dynamics, Crowley’s bureaucratic control slipping (which plays into the Monster of the Week demon-run brothel plot), and—in a continuing way—Dean Winchester’s anger management issues. That’s a lot to chew on all at once. 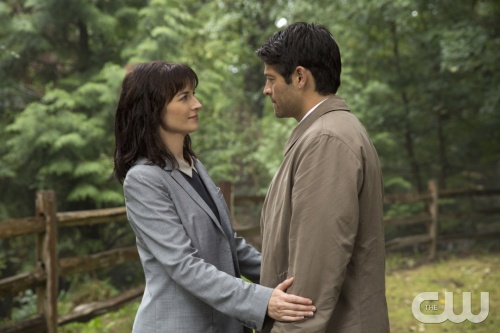 As per usual this season, our story comes in two chunks: Angel doings and Winchester doings. The Angel doings are Castiel and Hannah’s road trip adventures. Hannah, coming face to face with her vessel’s husband, realizes that her feelings for Castiel are not her feelings, they’re residual emotional residue of the human she inhabits. Hannah exits her meatsuit and the lady returns to being Caroline—the woman she was before her angel possession. Cas takes her back to her husband and starts having serious concerns about Jimmy Novak. Two things I really love here: the first is that we’ve quietly and kindly put Hannah on a bus without violently murdering her—the usual fate of any female who dares to grow attached to one of the male main characters. The second is that we’re remembering Jimmy Novak exists. Jimmy Novak was in one episode eons ago, but giving consideration to the humans that angels possess added startling dimension to the series and to Castiel’s character. After using, abusing, destroying, resurrecting, and just all around inhabiting Novak’s body for six years, now, harkening back to what that might mean suddenly has me interested in Supernatural‘s metaphysics again, and in Cas’s storyline. My minor complaint is that Hannah and Cas have been cordoned off in their own plot bubble since the beginning of season 10, so every time they’ve been in an episode their stuff just seems to come out of left field with respect to the structure and story of that ep in general. Maybe we can send Cas back in the Winchesters’ direction now?

The Winchester doings this episode involve, first, a Red Herring plot about Dean setting up a dating profile (with the adorably tacky username “Impala67”) which leads to them uncovering a prostitution ring run by demons. In walks our season Big Bad: an apparently Scottish witch woman who kills the demon in charge of the demon brothel and promptly walks out with all the girls in tow. What I suddenly and very desperately desired was that this witch, named Rowena, be the walking incarnation of vengeance for every horror routinely and systematically enacted upon women in this series. She took down exploitative demons with aplomb and took the working girls under her wing. She took them to a swanky restaurant and got them above and beyond service instead of being kicked out. She showed every sign of training them up as witches under her tutelage. She then promptly used them as magical decoys to get herself away from the Winchesters. Le sigh. So she’s not the absurdly empowered, sharp-clawed, feminist tornado that I hoped for. I can deal with that. I wanted the same thing out of Abaddon and was both pleased and disappointed in that respect. But what Rowena is (and this might be better than feminist tornado) is Crowley’s mother. Color me thrilled. It’s a refreshing plot twist that remembers the early season 6 revelation that Crowley was a 1600s Scotsman before he was a demon—something which the past few seasons have seemed to forget, waffle on, or ignore entirely. I love when my continuity is continuous, so I’m pleased. 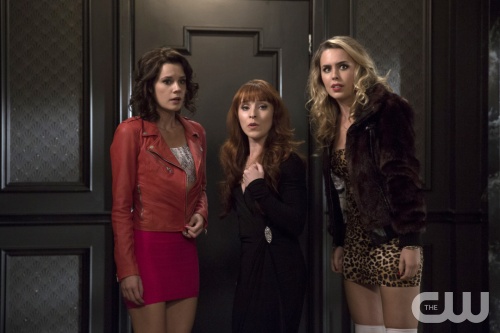 But with so much going on, I honestly can’t see where any of this is going. I’m trying to be gracious because season 6 was obnoxiously disjointed and, in the end, wonderfully tied everything up in a pretty bow that had me squealing. In addition to Hannah’s departure, this episode also had Cole—the early-season psycho who was tracking Dean—show up, try to kill Dean, inadvertently end up in the middle of the Winchester BM scene, and then promptly drive home to his family, presumably emotionally healed. Is that the last we’ll see of him? It seems like a rather sudden exit if you ask me. But he also seemed like a plot tumor. On the one hand, I hope he comes back just so his existence wasn’t a time-wasting ploy. On the other, what exactly was his function?

Perhaps astonishingly for an episode about witch brothels featuring Dean Winchester’s sex-life and the title “Girls, Girls, Girls” (a reference to the Mötley Crüe song, don’t get me wrong) this episode mostly (mostly) avoided the sort of degrading representations of women they’ve more and more slid towards when they need some quick plot fodder. Let us never forget the season 8 travesty: “Man’s Best Friend With Benefits,” which featured a dog who routinely transformed magically into a woman of color (complete with collar!) and boffed her “master.” Every time Supernatural goes near sexually themed episodes that one looms like a specter. “Girls, Girls, Girls” might not have been the most cohesive thing, but it was overall decent and has both found a plot and is pointing it in some interesting directions.