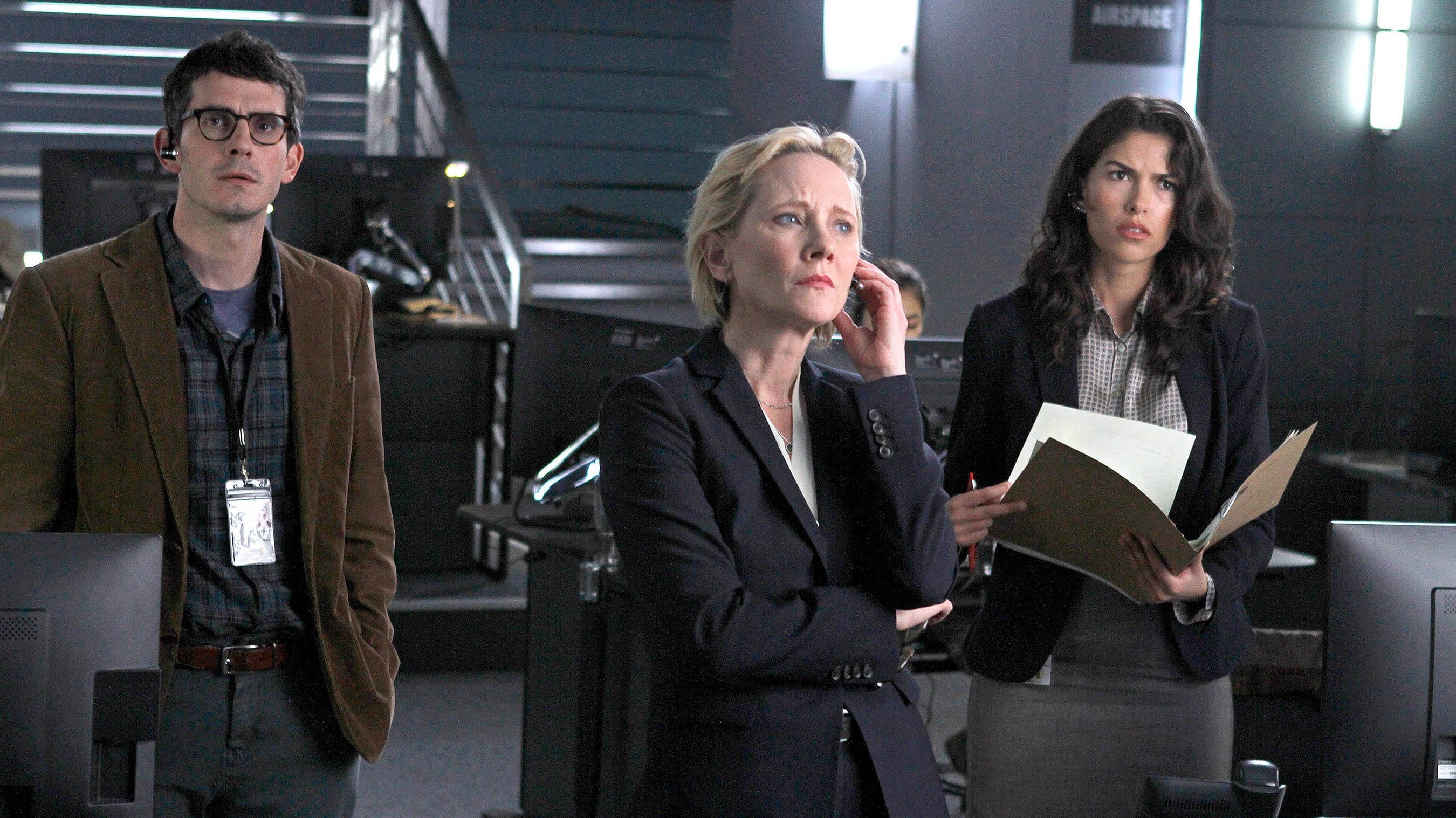 The Brave has been consistently entertaining thus far. What I like about it is that it doesn’t try too hard to fluff things up with character and backstory. It also doesn’t pull any punches on graphic violence, which sometimes surprises me for an NBC show. Each week you can count on watching a veteran team of special ops soldiers getting an assignment and executing it to completion in an impressive fashion, and really that’s all I’m here for. This week was bookended by a couple character beats that actually made the mission of the week a little better, and for that reason I think this is the best episode yet.

We start at the gang’s base in Turkey, where they are playing horseshoes and hanging out waiting for that call they know they will eventually get. Preach is FaceTiming with his daughters and once he is off complains that they are always asking for money. Dalton tells him he shouldn’t be such a push-over, and Preach asks him if he ever sees himself doing the family thing. Dalton can’t commit, and Jaz agrees. “See, I’m not alone,” Dalton says. “Alone is what you two are gonna be forever,” Preach jabs at them. That’s when they get the call.

There has been significant chatter amongst a terrorist cell in Nigeria around the U.S. Diplomat Charles Webb, who has been key in peace talks in the region. Deputy Director Patricia Campbell assigns Dalton and his team to protection duty over there, and they head out immediately. The mission seems routine enough; armed guard and escort, security clearing Webb’s path ahead of him. While clearing in front of the U.S embassy, a man and his young daughter walking down the street catch Jaz’s eye. The girl stops and turns to her and comments how Jaz is a soldier “but you are a girl.” Jaz tells her, “I’m soldier because I’m a girl.” It’s a nice little moment. Webb however strangely decides to stop and take a phone call from his wife out in the open. Dalton urges him that they have to keep moving, but Webb tells him if he doesn’t pick up his wife’s call it will be her Dalton is protecting him from. Why he can’t walk and talk I’m not sure. 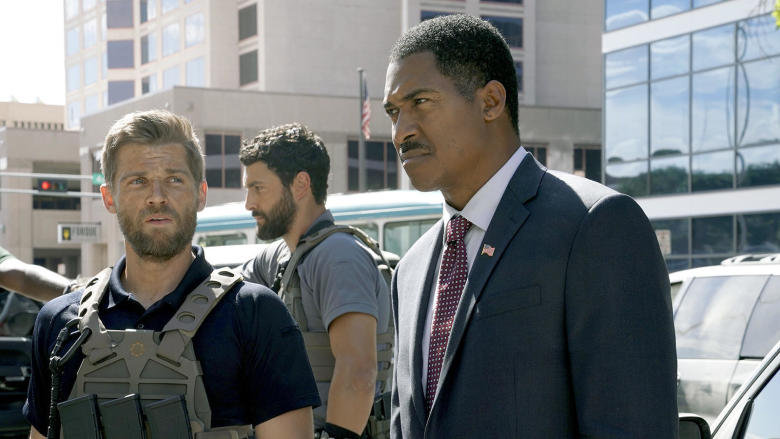 Anyway, at the end of his conversation with his wife there is an explosion down the street. This is at the mall where Webb’s wife was shopping. Campbell, Noah, and Hannah all watch the video delivered by the terrorists who have taken hostages at that mall, Webb’s wife included. They demand the release of General Ogu, a war criminal, or they will start killing hostages. The problem is Ogu died two days in custody. A terrorist cell with hostages demanding the release of a dead man. Hannah asks what the playbook is for that and Campbell assures her there isn’t one. Dalton and his team will need to infiltrate the mall and take out the terrorists, and they’ll need to do it without letting the Nigerian National Guard know.

Simple enough for this team. They quickly enter the mall and get eyes on the terrorists, including their leader, a man named Emmanuel Ade. He is ruthless with the hostages and really does come across as menacing on screen. Preach cleverly surrenders himself, posing as someone who had been shopping in the mall that day and doing a pretty convincing accent. But as he has a camera on him, headquarters is able to get a good eye on everything going on from the inside and relay it back to Dalton and the others. Preach confirms that Webb’s wife is there. We also see that the little girl Jaz interacted with earlier is present with her father. Yuh-oh.

Dalton, Jaz, and McG have the enemy in the crosshairs and are JUST about to pull the trigger when another stray mall-goer, whose father is amongst the hostages, shows up with a gun demanding them to release his elderly dad. He is quickly shot by the terrorists and left for dead, and knowing that they are too out in the open now, Ade moves them to a more secure location. McG goes to the man’s aid and performs surgery on the spot (he cauterizes the wound with a hot hair straightener–yugh) while Jaz and Dalton move in for the kill. Only the terrorists and the hostages are now in a narrow hallway together. It will be extremely hard to not take out any civilian casualties if they go in to attack.

In one of the coolest scenes of the series yet, Hannah and Noah (watching on the mall’s live CCTV they hacked into) direct Jaz and Dalton, on the other side of a wall from where the terrorists are standing, to aim their guns through the wall and take them out in one shot. Like, they are just standing there guarding the hostages, then: DEAD. Pretty cool stuff. Anyway, they are able to get the hostages out, but they soon learn that Ade is still alive and with the little girl from earlier. 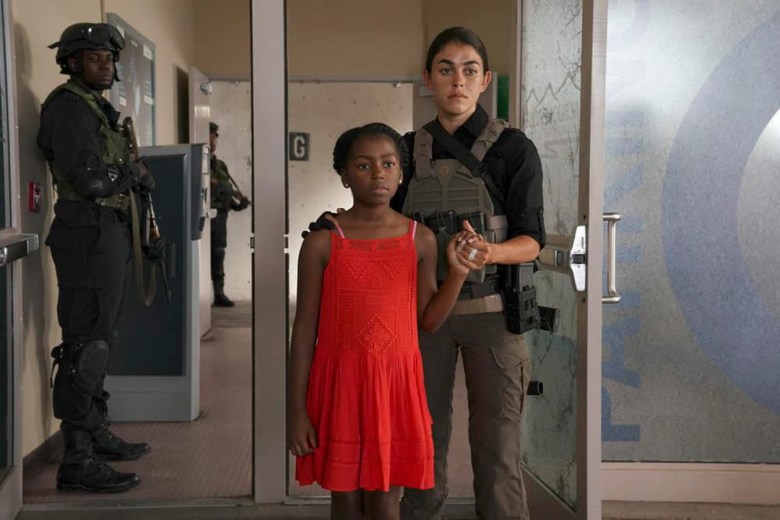 Jaz and Dalton head back in and coax Ade out of his hiding place, a gun to the girl’s head. In one shot, Jaz not only takes out Ade, but she hits him directly in the synaptic chord to avoid Ade pulling the trigger, which he had his finger on, in the last second of his life, killing the girl. Jaz hugs the girl in an emotional moment. Is she coming around to this idea of having children?

In a final scene, Campbell receives a letter addressed to her. It is hand-written and from her son, who we know she tragically lost just before the beginning of the series. It is the letter every soldier writes to have delivered to his or her family posthumously. We hear her read the words, and I have to say I got a little choked up. Maybe it’s a cheap ploy to get me invested, as we are given almost nothing to go off of when it comes to Deputy Director Campbell, but the scene was well written and acted, not heavy handed, and it was a scene the show needed. Overall from start to finish the episode flew by and felt like its own little action movie. Well done, The Brave, well done.