Last year, The Good Place left us with a cliffhanger almost terrifying in its inscrutability, thanks to Marc Evan Jackson’s delivery of a line that could have meant either the entire dissolution of a plan multiple episodes in the making, or the more merciful–and arguably more entertaining–outcome: that Shawn isn’t as mad as he may sound. Of course, fans have been theorizing for weeks on what Shawn’s cold, stern “Have a seat” could have meant for our characters’ future. Many thought Michael and the gang were toast; others rooted for the more “fun possibility” that Shawn would be impressed by the whole scheme, promote Michael and “increase his workload”; and still others predicted that Michael was being tortured by Shawn or that representatives from the Good Place are somehow manipulating everyone in the Bad Place (Shawn and Michael included).

Still, if The Good Place is at all the show we’ve come to know and love, it’ll flip the script again on us somehow, and in myriad ways. It’s entirely possible that Shawn is in fact torturing Michael by convincing him that he actually believes Michael’s universe is on its second attempt, and orchestrating an achingly long-term plan to extend a term of demon-on-demon-on-human torture. What seems more certain is that Vicky has indeed been framed and thwarted (quite brilliantly by Michael, who whispers “something-something Vicky something-something” into Janet’s ear, resulting in one of the most delightful lines of the episode as drunk Janet flawlessly repeats what’s said to her to a vexed Vicky). We’re still not fully able to trust that Michael feels true kinship for his four “friends,” but it was indeed heartwarming to see them leap up from the tracks and embrace the grinning, relieved-presenting demon at the end of the episode, after the train holding dozens of skeezy demons chugged away right above their bodies. 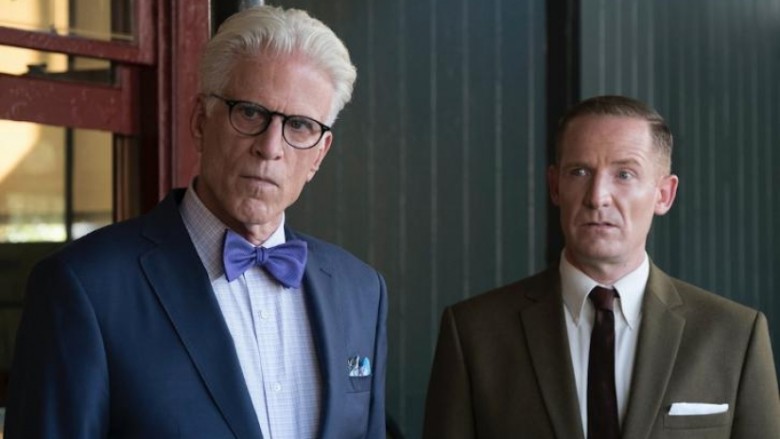 Even more dubious, now, and what seems like the show’s logical next problem, is the eventual fate of the humans who seem to think they’re in the Good Place. As indicated by Michael’s halfhearted smile, there’s guaranteed to be a letdown for them–nothing, as we know, can be that simple.

Some of the more subtly genius moments of the show, of course, belonged to Danson, who has the ability to milk the script for all its multifaceted elements; for example, when Shawn is in Michael’s office, watching him explain to the Fab Four that they’re in the Bad Place, there’s just enough terseness in his voice to imply that he’s hiding some big truths from both Shawn and the humans. He plays it off well enough for Shawn not to become suspicious (perhaps, a side effect of his lack of emotion is that he can’t pick up on these hints through variations in the voice), and apparently well enough that the majority of the gang is actually convinced that he screwed them over.

And indeed, for all we know, that could still be true. But since this largely feel-good show has relied on some classic feel-good themes–forgiveness, empathy, compassion, the capacity for change and growth in the most unlikely places– to push its story forward and develop its characters, it could be that Michael’s now in the predicament that will redefine his entire existence as a demon. How will he get these poor saps to the Good Place that they, at this point, basically deserve? (If going through 800 iterations of hell and still being a decent person willing to make leaps into faith isn’t enough to get out of hell…) Or, is there yet another metaphysical reality like the Medium Place that Michael and the gang will have to escape to? Again, we’re taking a leap of/into faith, just as our players are, that this show will provide us plenty more shockers and surprises to sustain the rest of the season.