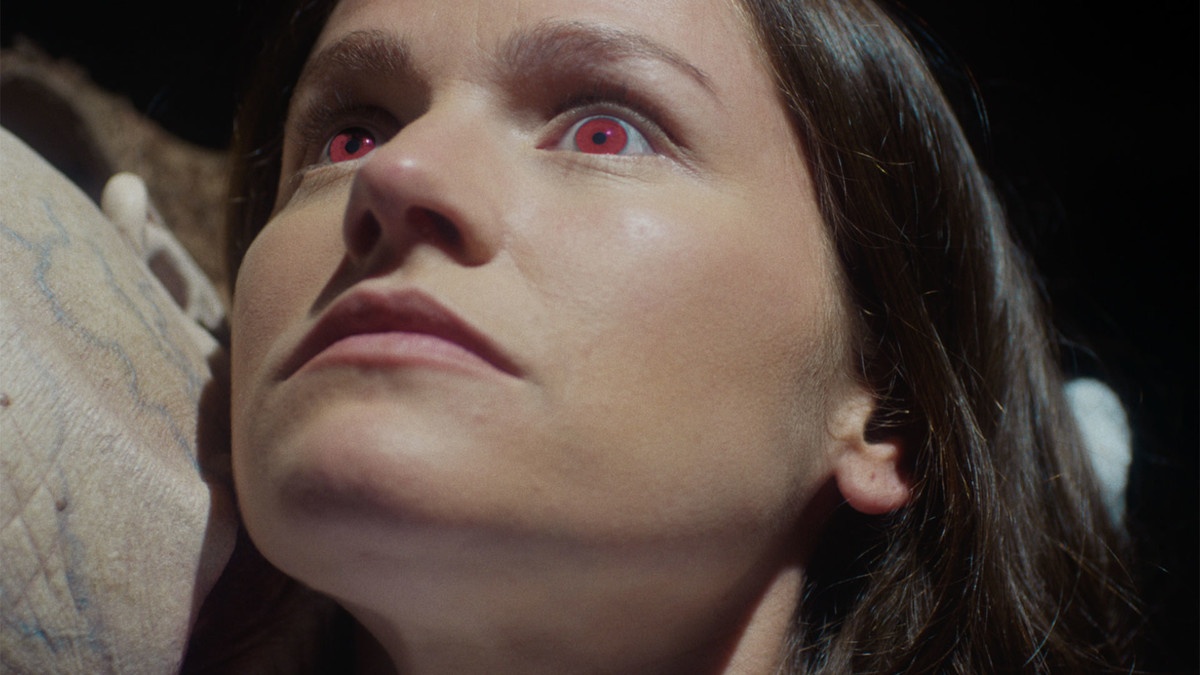 Van Helsing wraps its much improved second season with a weak finale in “Black Days.” I find it impossible to believe that real humans looked at “Black Days” on paper and thought, “Nailed it, this is going to be great.” It isn’t even a brave Hail Mary. It’s much closer to taking a slow cowardly knee to run out the clock. Van Helsing would have been better served by not airing the episode and generating some mystery behind its vanishing. Unfortunately, they produced, edited, and aired this embarrassment.

Maybe they can learn from their mistake. The first big mistake is there was only one moderately favorite character in the finale. Van Helsing is only in the final shot, she’s asleep under a sheet. That’s a mistake. I assume at least one person pointed this out, we’ll call this unknown storyteller “Kred.” Kred noted we should do more with Van this episode. Somebody else thought Kred was wrong. Here it is SyFy, fire the guy that thought Kred was wrong and they would get away with this. No Van, Doc, Julius, Axel, or Mohamad; an entire line up of beloved characters were a no show. Big mistake. Ridiculous call by any professional in the business. 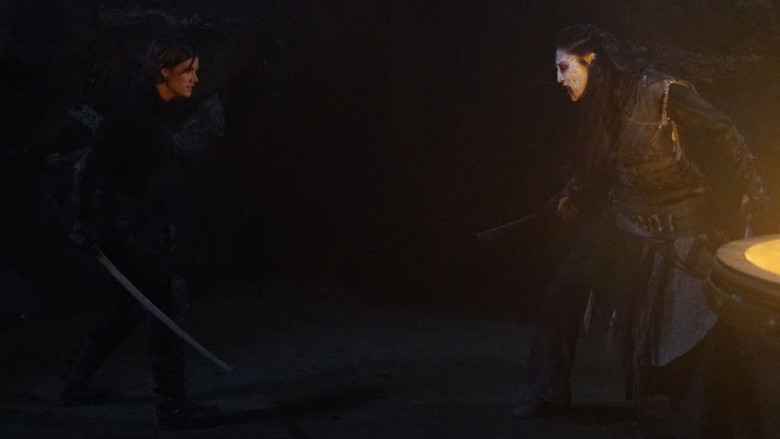 This finale is, in essence, a race to the top of Elder Crypt mountain. Scarlett and her real mother, Abigail (Abby) on one team verses Dmitri’s team on the other. Scarlett and Abby are slow moving up the mountain because of the thinning air. “This might be authentic” notes Kred, “but it’s a terrible idea for a race.” Fire the guy that thought the slow race was a good idea. Dmitri needs help from an Oracle. He doesn’t want to kneel for her, Dmitri doesn’t think she’s worthy. The Oracle forces Dmitri to his knees (a meaningless gesture in both plot and character) and scars him with a mystical compass to guide him to the Elder’s Crypt. Then she tells Dmitri only three can go with him and she kills the rest of his team. Only three? Someone had to point out the absurdity of that line, two other people essential to the plot are on their way.

Dmitri gets to the cave entrance first. Also, he has the only key so… Dmitri, Scab, and Sister enter the maze of cave tunnels and soon begin hallucinations from their past. Don’t look for a thematic link other than in all three flashbacks they’re still human. We see Dmitri with the Marquis de Sade. Dmitri already has the hots for his sister, Antanasia, but she’s still too young for his tastes to ruin. To dampen his passion, he takes de Sade’s full menu of punishment. In case this scene was written as a first class yawn it was filmed or filtered (red) in the least imaginative way possible. Scab’s scene was a little more interesting, he gets bullied at work for crossing the picket line. The bullies lock Scott/Scab in a closet, but he’s claustrophobic. 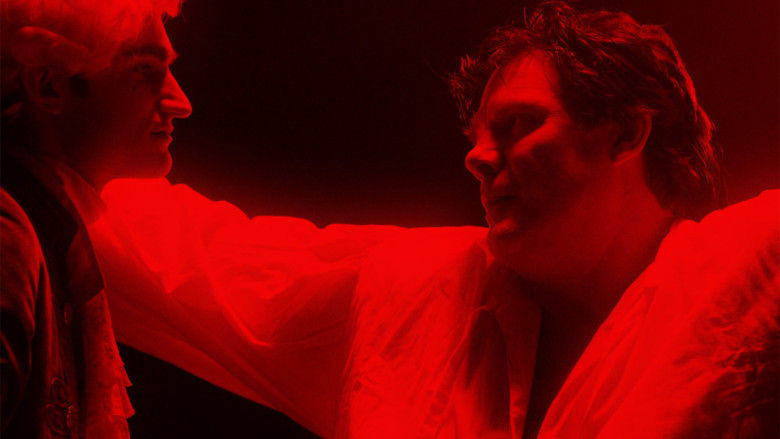 While this scene is mildly interesting and powered by a great performance, nobody cares about Scab or his backstory. The Sister is being menaced into converting to some unknown religion. When she refuses, the priest pours oil on her and sets her on fire. Interesting? Maybe, but again, nobody cares about Sister. She’s an unidentifiable extra in the hench army.

By now, Scarlett and Abby reach the opening of the cave. We do care about Scarlett, she’s a great character but this is only our second episode with the real Abby. The real Abby is actually colder than the fake Abby from the Mountain Lab Lair. They also suffer hallucinations but not fear based, more like gentle flashbacks of youth. Abby tells Scarlett how she was given a vile of “The Dark One’s” blood after her mother was killed by the elders. This is two meaningless plot points in one. First, there is more than one elder. Second, there’s a “Dark One.” Lesson of a terrible finale: You can’t introduce new information or ask new questions when you have a horrible history of not paying them off. 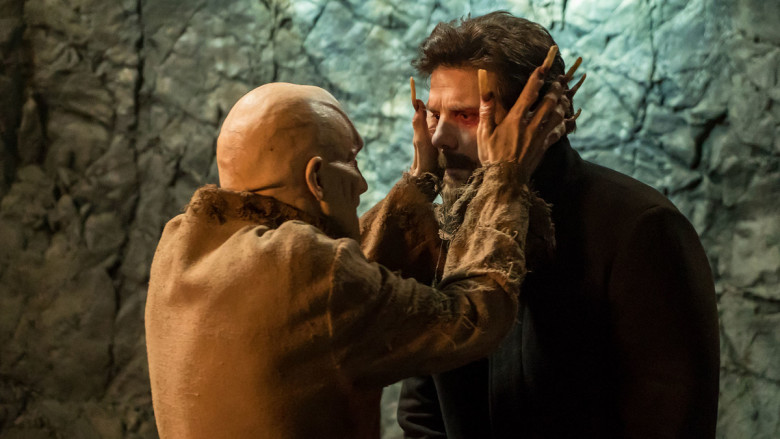 Abby wants Scarlett to take the vile of blood but Scarlett isn’t interested. She tells Abby to give the Dark One’s blood to Van, wherever she is, which is not in this finale. BTW, I’m not knocking Jonathan (Axel) Scarfe’s direction of this hot mess. He and Paul (Dmitri) Johansson directed the last four episodes between them and two of those were excellent. Scarlett and real Abby arrive at the crypt entrance a moment before Dmitri and his two story-anemic hench. He cackles and explains “only the blood of a Van Helsing can open the door.”

There is a quick showdown where Abby gets stabbed by the Sister, Scarlett stabs Scab, and Dmitri grabs Scarlett by the neck. Abby puts her bloody palms to the door which open to reveal the creepy, dusty, arthritic Elder. They’ve been showing glimpses of this guy since Van’s daughter died and built him up for months. Prep yourself for the big letdown. Elder tells Dmitri he smells something weird in Scarlett’s blood, “The blood of the first flows through her veins.” The bottom line of this terrible twist is that Elder is actually Scarlett’s servant and must obey her until the Dark One rises. Scarlett orders Elder to kill Dmitri. Elder crushes Dmitri’s head as Dmitri cries out to Antanasia. Yawn or laugh, but terrible for finale. Then, Scarlett orders Elder to find Vanessa. Cut to, Elder at the Mountain Lab Lair, bodies everywhere, and Vanessa under a sheet, asleep again. Elder bites her and she wakes up with red rat eyes. Unimaginative. Undefendable. Unacceptable.