The fourth episode of WESTWORLD shows the memories of past events flooding in for both Maeve and Delores as they try to figure out if they are going crazy or if there is more to their world than they realize. Ford is building a new narrative inside of the park, but it’s disrupting current storylines. Whatever he’s doing is huge, but what is it?

Ed Brubaker and Jonathan Nolan wrote this episode of Westworld. You may recognize Ed Brubaker’s name since he is the writer of some of the most interesting comic book series being released right now on Image Comics. If you haven’t read Criminal, Fatale, or The Fade Out, you should run out and get yourself the collected trade paperbacks. His comic writing is noir inspired crime mysteries, and if you’re like me and don’t like superhero’s don’t worry, you won’t find any in those books. His style seems to mesh really well with the mystery at the heart of Westworld, and this episode is one of the better of the series so far.

Episode four starts like most of the other episodes; Bernard has a private conversation with Delores. She’s becoming more aware of things in her past, and realizes both of her parents are dead. Experiencing sadness and loss without a reset in memory is something new for her. Bernard is completely fascinated by her transformation, and instead of stopping whatever is happening with her, he merely observes interested in the evolution of her consciousness. He offers to give her something to remove the pain and loss she’s feeling but she doesn’t want that, “Is there something wrong with these thoughts that I’m having?” The only thing wrong is that the more her memories flood back to her the more out of sync she will be with the programmed environment of Westworld. “I think there may be something wrong with this world, or something wrong with me. I may be losing my mind.” 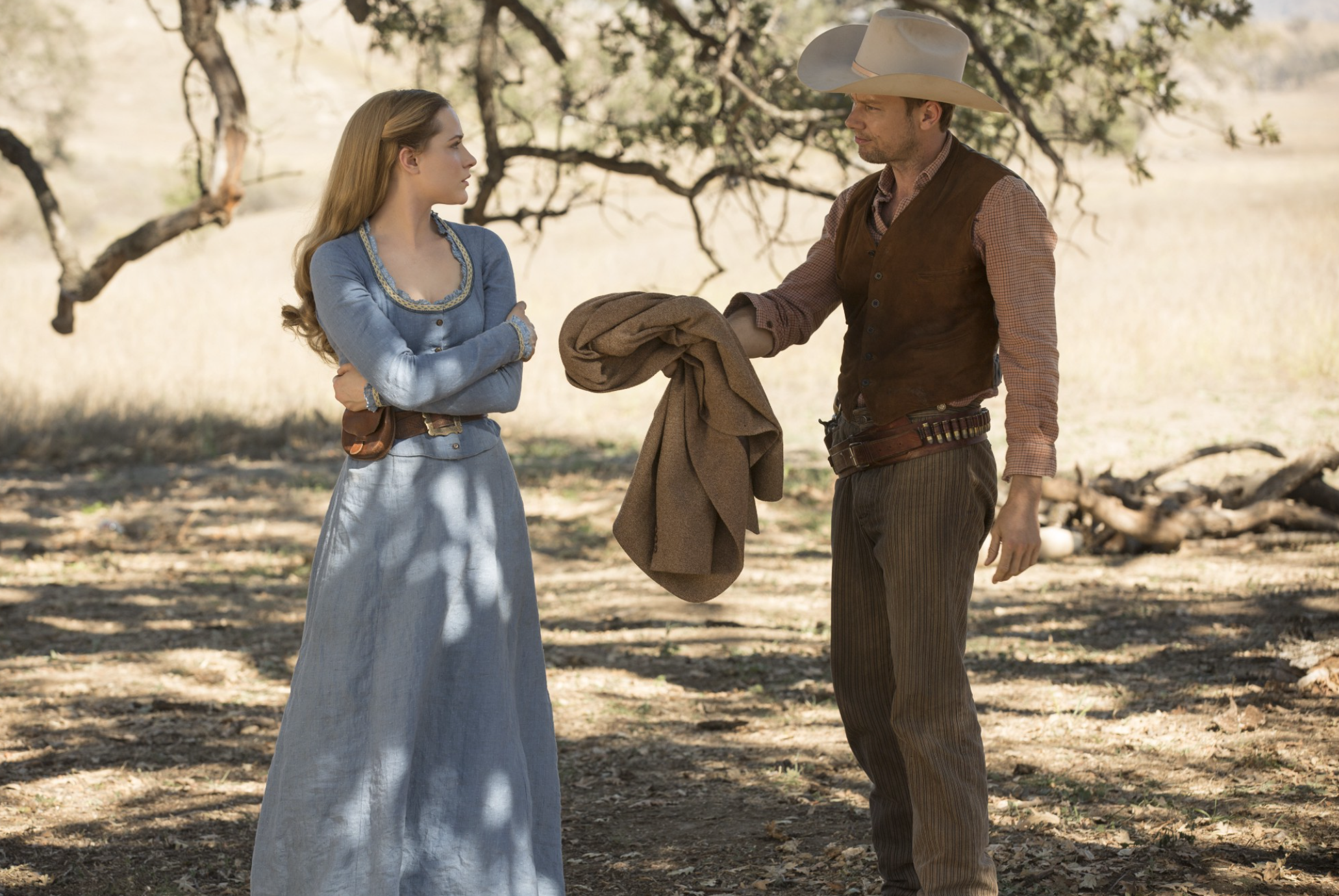 Delores wakes up with William and his friend Logan by their campfire, but it’s unclear how she got back there after her discussion with Bernard. We know William is marrying into Logan’s family, but he reveals to William that his family is one of the main investors in Westworld. This is what William is marrying into. There’s something about Delores that attracts William, and his chastity and disinterest in any of the hosts in the park seems to be wearing away. Something romantic is going on with the two of them, but it doesn’t seem like it will end well, especially since Logan is a murderous psychopath once he sets foot inside the park. Logan tries to have sex with or kill almost everything he comes in contact with, and he continues to try and get William to go “black hat” with him. It seems William finally gives in.

Whatever new narrative Ford is building is going to be huge. Not only is it massive by the scale of the construction, but also it’s going to be a game changer for the park. It’s already disrupting the storylines in place, and it may be the cause for the strange behavior of some of the hosts. Theresa confronts him about the possibility of slowing down his plans since the corporate board is coming and they’re unhappy with what’s going on. Their lunch conversation is intense, yet subtle. Ford has taken her to the same restaurant, and sat her at the same table she sat at with her family when she visited the park as a child. The entire encounter is show of power by Ford. He lets her know he doesn’t care about the board, he’s the real God like power inside of Westworld, and he controls everything. It appears he’s able to stop all of the hosts and their movements by his will. Theresa notices every one of them freeze, including the host pouring her a glass of wine which simply overflows all over the table since he is immobile. It’s unnerving for her. Ford sees and knows all things, including her relationship with Bernard. “Please, don’t get in my way.” It’s a veiled threat, but it’s clear Ford isn’t about to let anyone or anything stand between him and his grand vision. 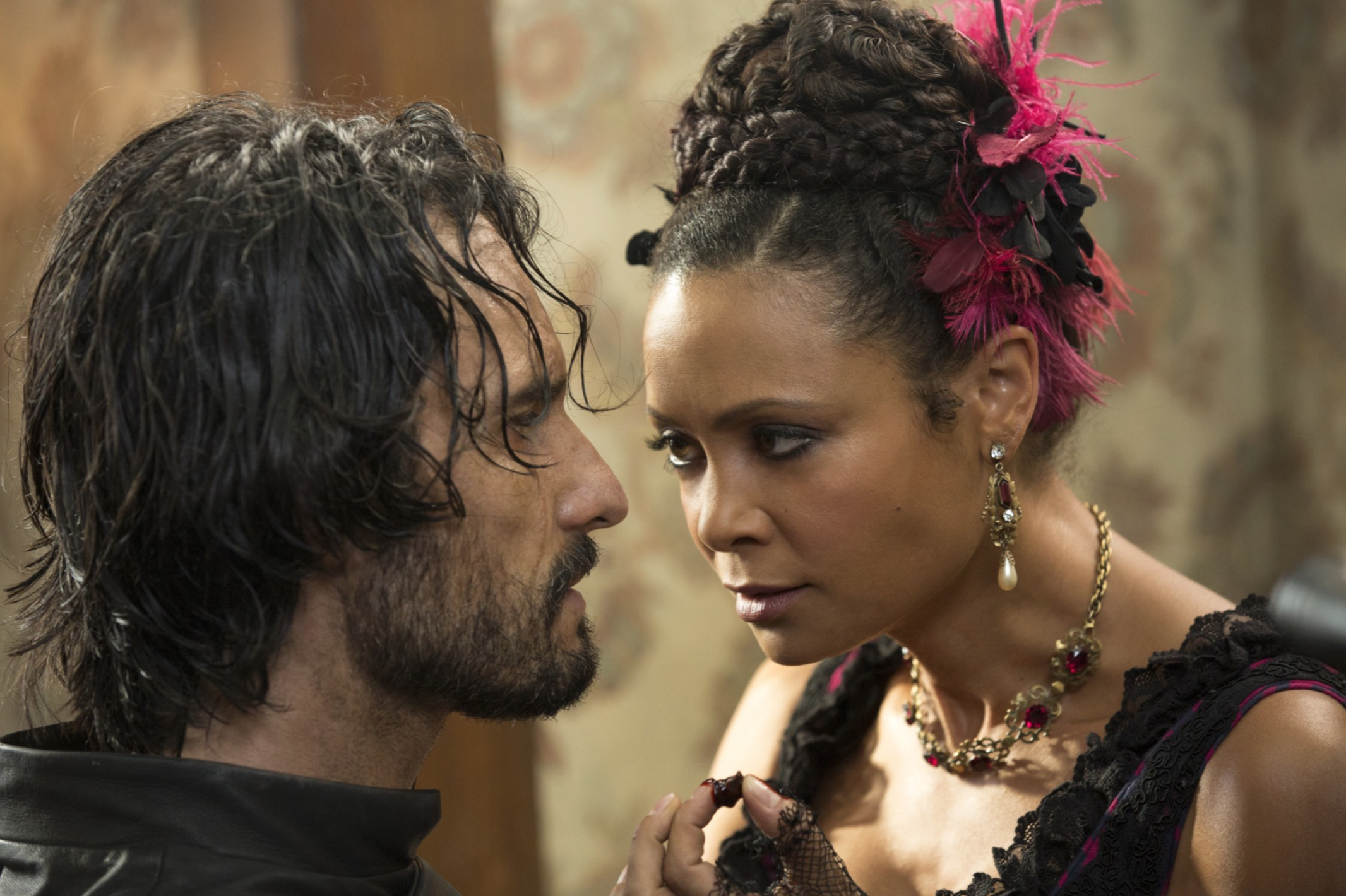 Maeve’s flashbacks and déjà vu episodes continue to shake her to the core. Is she going crazy or are these memories real? Visuals of the aftermath of the massacre in her brothel flood into her mind, and she sees or remembers the engineers arrive in their HAZMAT suits to take her and the other hosts away to be fixed. She’s unsure of who or what these men are, but remembers waking up on the operating table before they could get all of the bullets out of her. In her room she makes a crude drawing of what the men looked liked, and when she goes to put it in her hiding place she discovers numerous other drawings of the same thing. Later when a group of Native Americans travel through town a little girl drops a doll in the shape of a man in a HAZMAT suit. When she asks about it, she’s told it’s part of their religion. These men are referred to as “Shades” and are thought to be men who walk between worlds sent from hell to watch over their world. She knows she isn’t crazy, and uses a knife to find a bullet still inside of her stomach. Her curiosity has gotten the better of her, so she finds a way to be murdered so she can travel again to the world of the “Shades”. Will she wake up again and learn more about the world outside of Westworld, or will she be found out and be decommissioned like the other hosts with glitches? 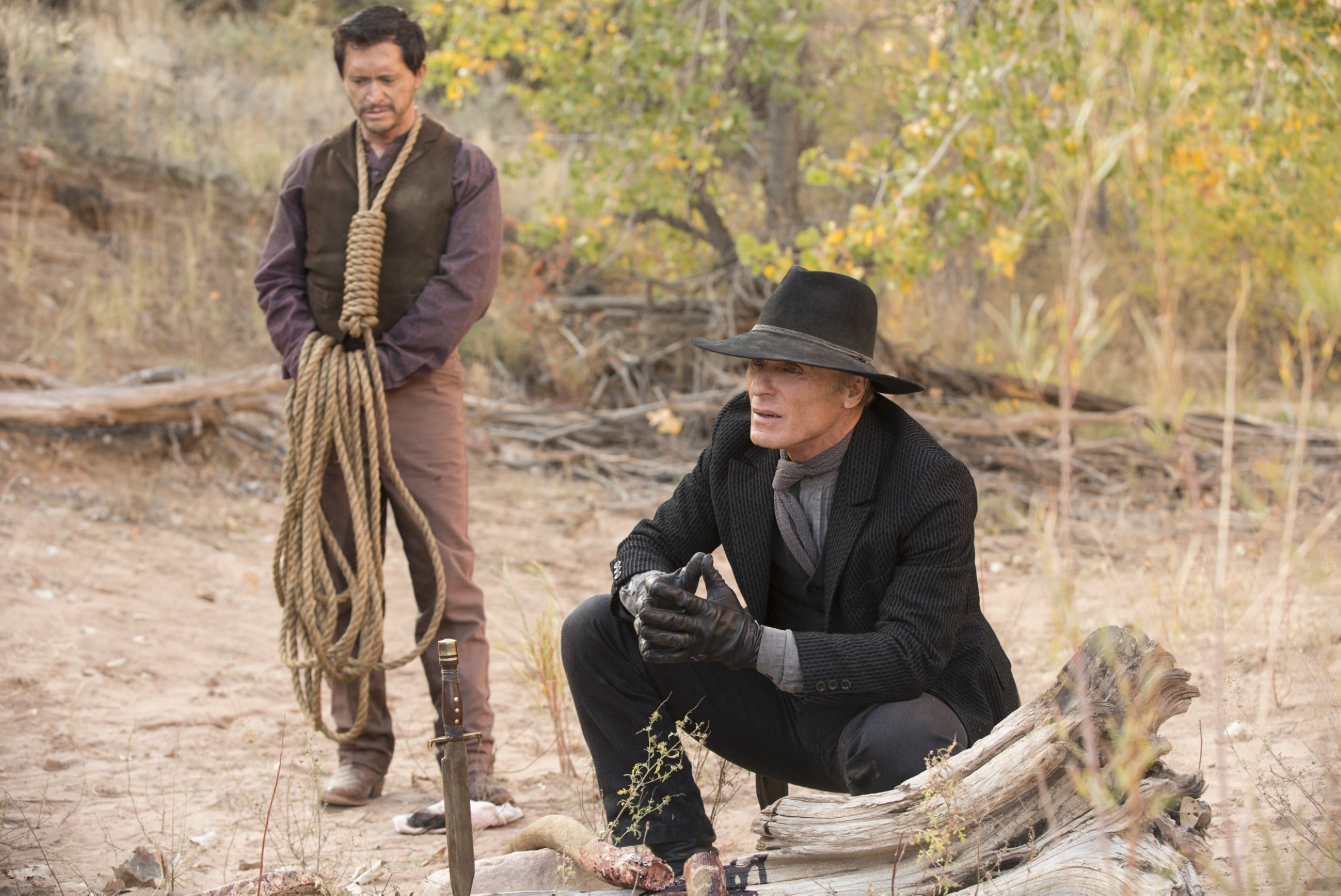 This show continues to get better every episode. There are so many layers to Westworld that it demands repeat viewing. When the show is viewed more than once it enriches your understanding of just how dense and well constructed the world of Westworld is. It may be the best television series on the air at this point, and has definitely become one of the most talked about shows of the Fall season.