AMERICAN HORROR STORY is back for a sixth season, but will it return to its horror roots or be bogged down by the insufferable campiness it’s been mired in the last two seasons? The season premiere shows a lot of promise, but so did season three’s Coven before it began to fall apart. For the moment I’ll remain cautiously hopeful.

I have a very strained relationship with American Horror Story right now, and it will take a lot to get me excited again about this once great show. When the first season, Murder House, came out it was like nothing I had ever seen before. It was creepy, intense, filled with great actors, and wonderful writing. Season two, Asylum, kept the creepiness going. It brought in Nazi’s, their Mengele type experiments, and somehow tied in alien abduction without being ridiculous. Things were good. I was excited for season 3, Coven. Part way through the third season of American Horror Story things took a turn for the cringe inducing.

The exact moment will forever be etched in my mind; it was the first musical number Stevie Nicks sang. It felt wrong, incongruent with the rest of the show, and it should have been a warning to me of what was to come. I seem to remember at least one other music video moment with Nicks in that season, and it turned out to be the birth of my disdain for the series. Sure I knew Ryan Murphy also created Glee, but I didn’t want to watch Glee, I wanted to watch a horror story like the title and the first couple of seasons led me to expect. Things got worse in season four, Freak Show. Not only was there a musical number in almost every episode that seemed out of place, but they were modern songs sung in an old time manner, despite the fact the series was set in the 1950’s. It ruined the show for me. The songs made the series feel less sinister, and the story line was campier than ever before. It no longer felt like a horror show, it felt like Murphy was just making a modern Rocky Horror Picture Show, but trying to sell it as scary.

Despite my disappointment with Freak Show (to be honest I don’t even remember how it ended. Maybe I stopped watching.) I tuned in for season five’s Hotel. I made it through two episodes before deciding there were better ways to spend my time. All it took were a couple of Lady Gaga music numbers and the Max Greenfield rape by the addiction demon and I was done. I’m not sure why I ended up watching the premiere of season six, Roanoke, but I’m glad I did. It seems to be an entirely different beast than the last three seasons, and a return to a darker, grittier tale. 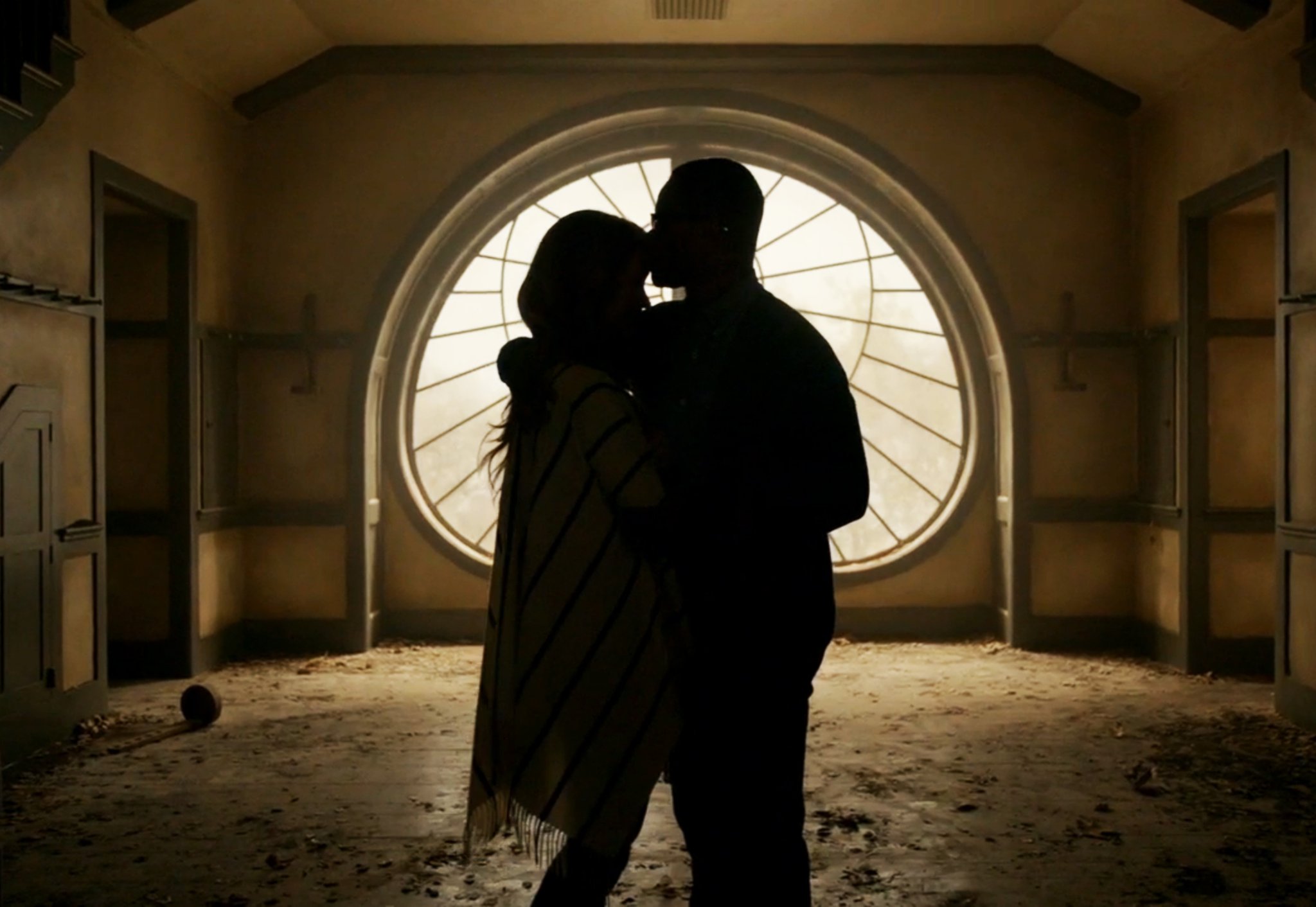 The Season six premiere was a strange beast. FX had been completely secretive about what the season was going to be about. With the story line under wraps, I went into the premiere blind, and I’m glad I did. The episode follows Matt and Shelby Miller (played by Cuba Gooding Jr. and Sarah Paulson) as they move from Los Angeles to rural North Carolina following the brutal assault of Matt and a miscarriage by Shelby. Strange things begin to take place after they move into their new home, but the thing that really made me sit up and take notice was the framing device they used for the narrative. It’s set up like a paranormal documentary show similar to Paranormal Witness or My Haunted House. The show claims to be based on real events just like one of those shows, and starts with “real people” (also actors) telling their story while Gooding Jr. and Paulson are supposed to be the better looking version of themselves dramatizing their story. The fake show they’re supposed to be on is called My Roanoke Nightmare. It’s a really delightful spin on the genre, and the best part is there doesn’t seem to be any of the camp that ruined the last few seasons for me.

The trouble for the Miller’s begins after they outbid a bunch of creepy rednecks for a huge mansion in the middle of nowhere. The house is gorgeous and was built in the 1700’s, but needs a lot of work. Here’s where the great tip of the hat to Paranormal Witness and My Haunted House begins. In those shows there are certain things that happen time and time again, and American Horror Story uses them well. There’s usually a financial strain from a new house gotten for a steal, a husband away for work for long periods of time, strange occurrences which happen to the wife but the husband doesn’t believe, and then finally an event that changes the husband’s mind.

The Miller’s sink their entire savings into the house, and soon strange things begin to take place. Matt travels a lot for work and is away from home for long periods of time, which is when the apparitions appear to Shelby. During one rain storm what Shelby thinks is hail, turns out to be teeth, only to disappear when Matt arrives home. The last straw is when Shelby is in their outdoor hot tub, and someone tries to drown her. All she saw were torches, and the easy scapegoats are the rednecks that were outbid by the Miller’s. There’s also some kind of creature making loud noises at night, destroying garbage cans, and leaving a pig carcass on the Miller’s doorstep. 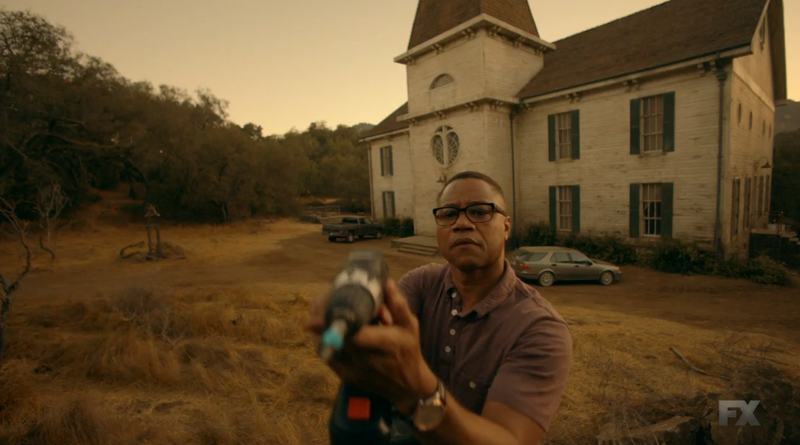 Matt has his sister Lee (Angela Bassett) come and stay with Shelby while he’s away on business. She’s a former cop, and he’s set up cameras all around the house that he can monitor from his cell phone. That should be enough protection, right? Soon people carrying torches circle the house, and Matt gets an alert on his phone. He’s unable to do anything but jump in his car and drive the two hours home. Shelby and Lee are all right but freighted, and a VHS tape was left playing on a television in their basement showing some kind of pig headed, human bodied monster in it. Shelby flees in their car unable to stand living in the house any longer, but hits a woman dressed in old time clothing walking in the road. When she gets out to see if the woman is ok, she follows the woman into the woods and gets lost, but suddenly torches appear all around her. She’s surrounded. 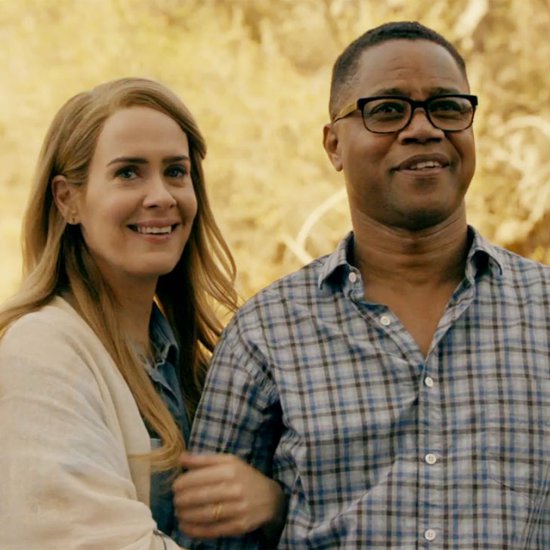 I’ll admit that after watching Ryan Murphy’s other show, American Crime Story, it was interesting and maybe even a little off-putting to see actors I last saw playing Marcia Clark and O.J. Simpson as a loving couple. After a while the shock wears off, and it’s just enjoyable to see these wonderful actors playing within the genre confines of the paranormal documentary. I’m not sure American Horror Story will be able to stay gritty and dark, but I sure as hell hope so.